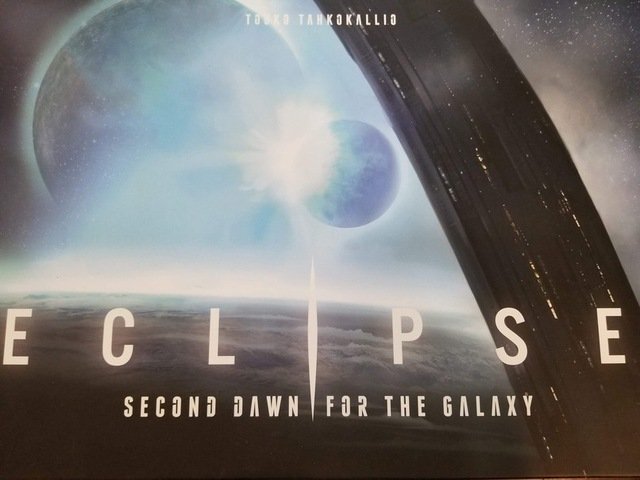 A game of Eclipse places you in control of a vast interstellar civilization, competing for success with its rivals. You explore new star systems, research technologies, and build spaceships with which to wage war. There are many potential paths to victory, so you need to plan your strategy according to the strengths and weaknesses of your species, while paying attention to the other civilizations’ endeavors.

Eclipse: Second Dawn for the Galaxy is a revised and upgraded version of the Eclipse base game that debuted in 2011 that features: 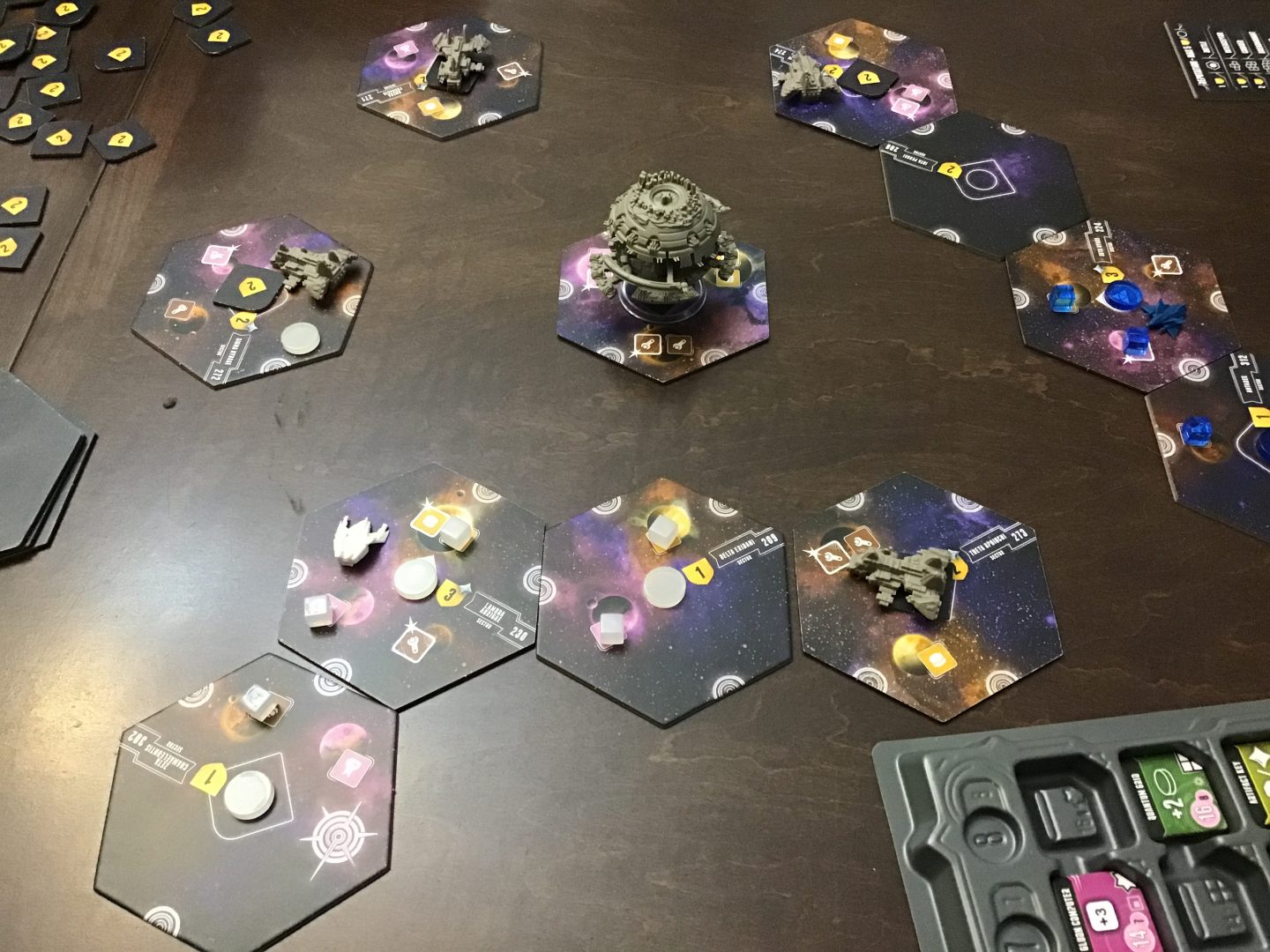 It is an absolute certainty that there is no shortage of 4X board games to play in the modern era. (For the uninitiated, a 4X game is one whose primary mechanics consist of eXploring, eXpanding, eXploiting and Exterminating). While Twilight Imperium may be the first board game to come to mind from this genre, I have recently enjoyed many others that seek to carve their own little niche into this well-developed gaming territory (you may check out our reviews of Uprising and The Silver River for other more recent forays into this category). And it always surprises me how many unique things each game can offer.

With that being said, when I first became aware of Eclipse : Second Dawn for the Galaxy a few years ago, I already had Twilight Imperium IV in my collection. However, given how long that game can be, I decided I needed a “short” 4x game to scratch the itch whenever the urge to play such a game came about without needing to commit an entire day to it.  I was forced to choose between The Silver River and the 2nd version of Eclipse at the time, and in the end went for the Silver River due to the significantly lower price point and the somewhat innovative idea of fighting Space monsters. And I wasn’t disappointed in my choice in the least.

However, as time went on, I still heard great things about Eclipse. And as I continued to take in the positive feedback the ‘net had to offer on the game, I really had to ask myself if I really needed another 4x game in my collection. Could it realistically offer anything that was truly different and new? Enough to justify yet another purchase of a space-themed territorial conquering experience?

After a few years of waiting for shortages of the game that was between printings and having accrued enough savings, I can finally say that I own the 2nd edition of Eclipse now.

And I must say, although I initially had some misgivings, I am not disappointed in the least.

First and foremost, the production quality of the game is top-notch. Every component is designed to have its own little niche inside of the game box, and there is virtually no spilling over of components when inside. It is perfect.

Moreover, the game trackers and components are all well designed.

The trays not only store pieces, they are also of such a well-executed, utilitarian design that they also serve as trackers for your resources during the game. 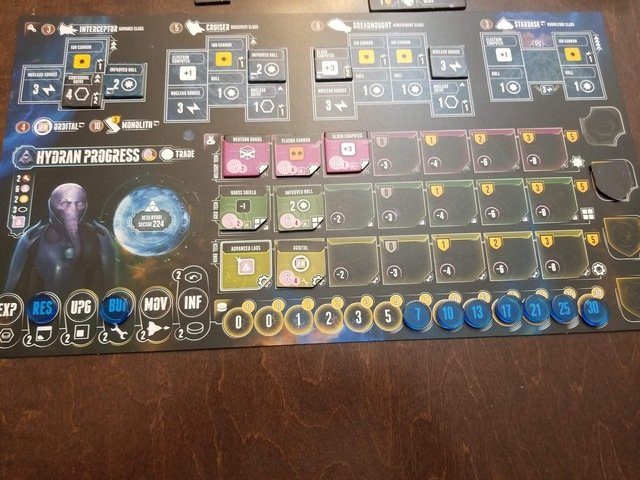 There are seven playable races to choose from. Each of them feel both unique and balanced. During the course of the game you will of course build up your empire to achieve galactic dominance, but the way in which Eclipse does this is perhaps the most unique I have seen.

This is because Eclipse is perhaps the only space-themed 4x game that lacks a huge focus on combat. Don’t get me wrong, it is there. But it does not feel nearly as prevalent as other games I have played. In fact, if one could level a criticism at it, it may initially seem to be too much of a Euro game with such a large focus on resource gathering. And I was actually quite worried about this aspect of gameplay in the beginning, as my wife tends to hate Euros with a passion. When I was teaching her the rules, I could easily see her rolling her eyes as I explained the rules to her, and she had no problem voicing her concern that playing Eclipse would end up being a waste of her precious time due to the nature of the mechanics.

Yes, the beginning of the game seemed very evocative of traditional Euros. But as a time when on, as we upgraded our ship blueprints with newly research technology as we ventured into space, I found that she was really getting into the experience. As was I.

Because the streamlined nature of the gameplay really made it addicting for us. It flows with grace through each of the 8 game rounds. And although the pacing starts the experience with little to no confrontation, by the time the end of the game comes, there is the potential for a gloriously climatic battle.

Though, to this game’s credit, this may not happen at all depending on players strategies. Because there are multiple paths to victory. 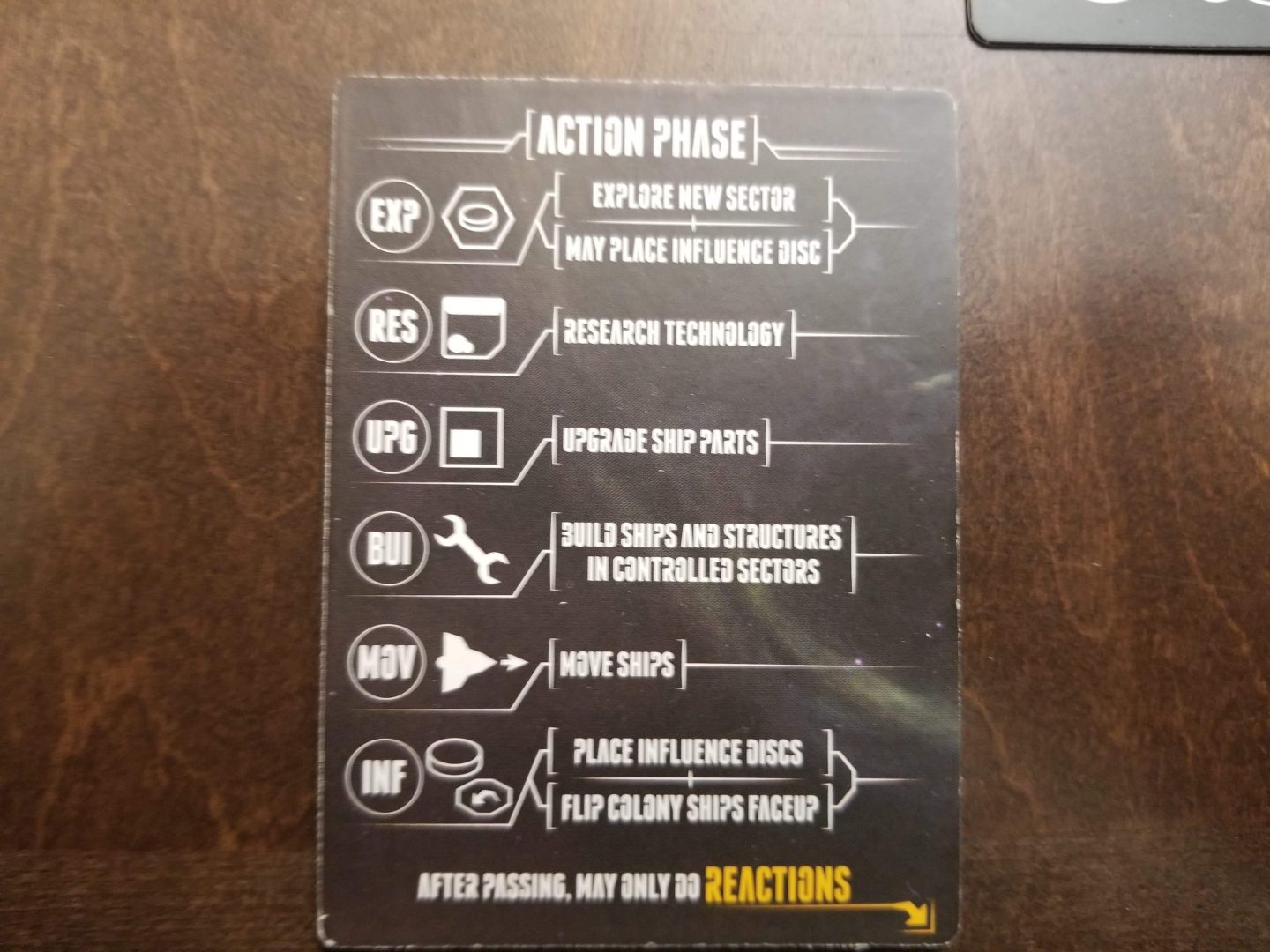 After our first game , we immediately set up another.

In my wife’s own words, I can tell if a game is good if she keeps on coming downstairs to the game from her at-home job to take turns all day long. Eclipse provided such an experience for her, despite her initial misgivings. Color me surprised.

With that being said, here are some of the strong or unique points that I have to share.

1) The game hexes in Eclipse are start stationed far apart with nothing in between. There is no board in the game (you can order a hex mat though if desired). What this means is that you might not ever connect paths between players if you choose to not explore specific pathways. It looks quite different than other 4x’s with large gaps in the play space regularly occurring. Not that this makes for an inherently strong point, but it is indeed different.

2) Again, this is a very streamlined game. It flows! But still takes about 2 hours for a two player game, more for more players. Still not as long as the other Big games out there.

3) Researchable technologies are fun, as are the abilities to upgrade ship blueprints. 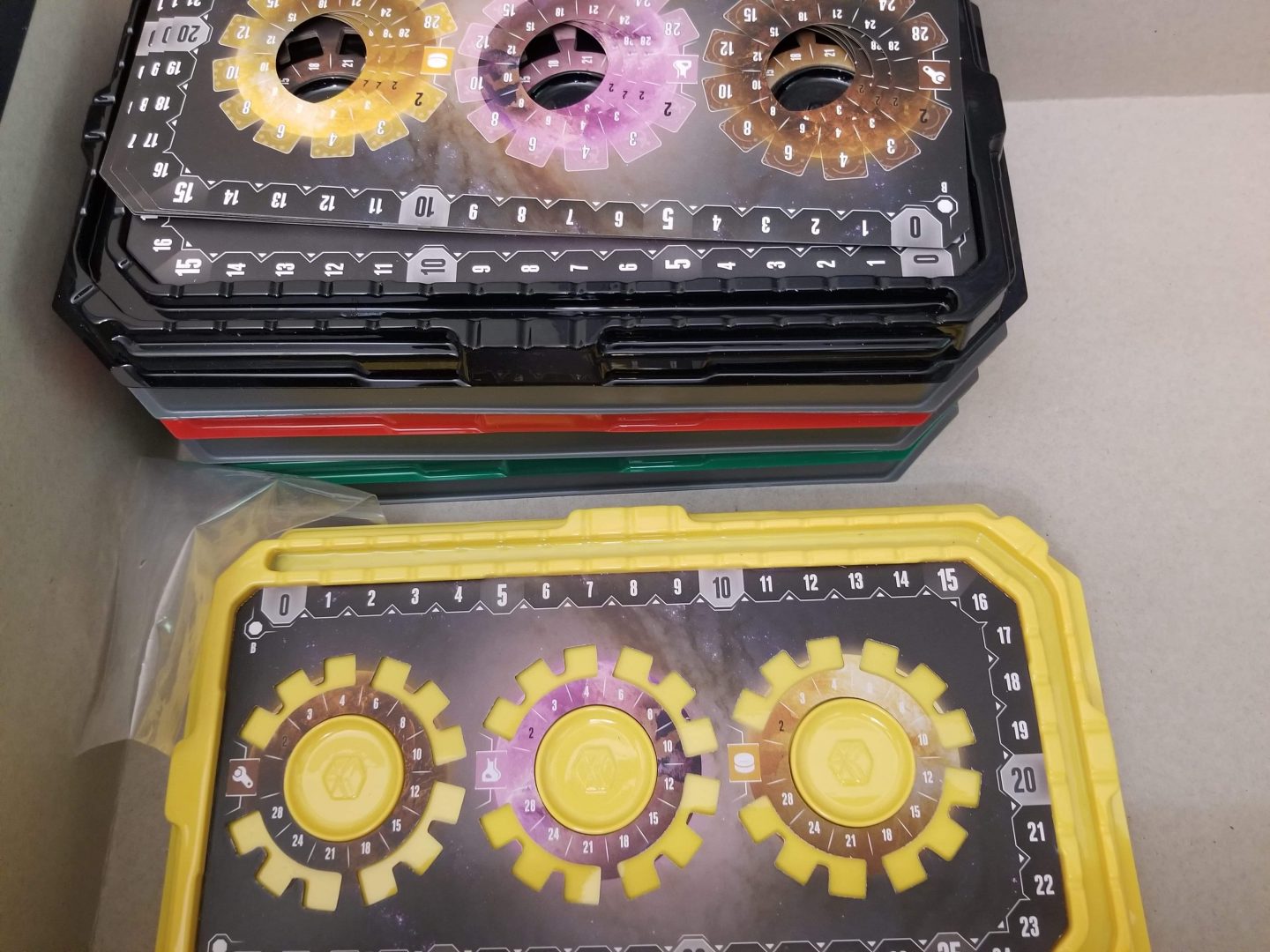 4) No storage solution needed! No need for Broken Token inserts! 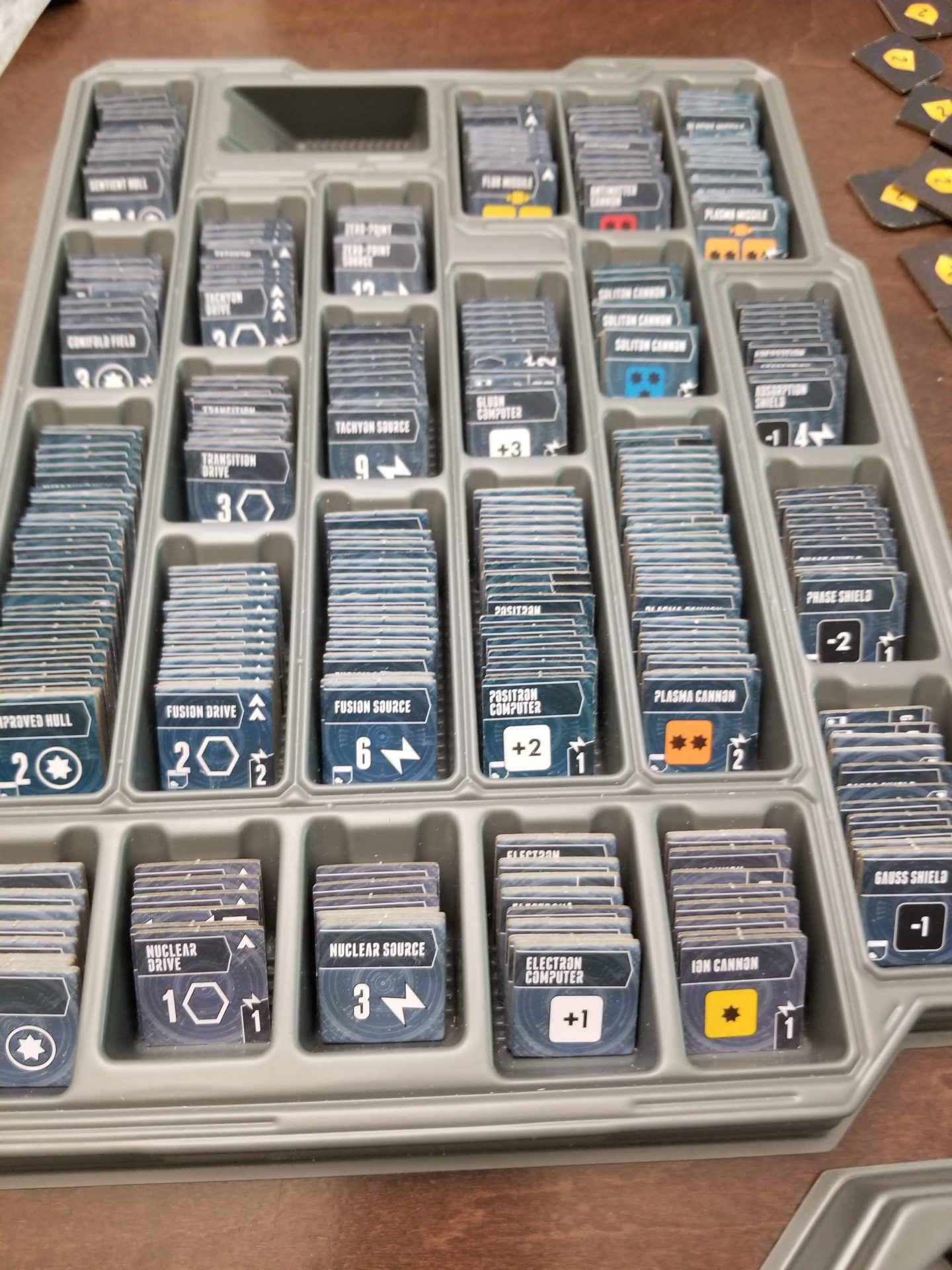 5) Travel between various sectors/hexes in this games requires warp portals between two hexes be aligned. If the symbols for warp portals do not line up, you need to find an alternate way to get to your destination.

6) Combat, while it still uses dice to determine hits and outcomes as is traditional, nevertheless manages to offer up something new in allowing a good advantage to the Defender in battle situations. Moreover, it is especially nice that while it is more typical in other games to have players trade hits and damage at the exact same time, in Eclipse, if you manage to destroy an enemy ship first, they will never even get a chance to fire at you!

7) There is a constant battle in resource management in this game, making it so you always need to be sure to  have enough gold to maintain your population scattered across various planets. While you do generally need to spread your influence throughout the Galaxy to obtain the all-so-precious Victory Points needed to win the game, having a large galactic presence means you need to pay more to maintain your power. What this means in gameplay is that if you somehow manage to go broke, you are out of the game! Though it should be mentioned there are ways to eliminate your debt by relinquishing systems you control, it is nevertheless very easy to bite off more than you can chew (yes, it has happened to us on more than one occasion!).

I do have some gripes about the Rulebook. I do find that the printing is rather small and cluttered, and would have preferred some more spacing out between different sections of the book. However, on the plus side, it has some very good examples of gameplay broken down between 4 fictitious players to give you a better sense of how Eclipse plays out. And I do wish that there was a separate handout available detailing researchable Techs for easy access rather than having to search for the Rulebook every time you need a reference.

I do wish the game still came  with a central game board, as it can hard visually aligning the hexes without a reference. Yes it can be done, but it can be a little sore on the eyes of things don’t initially seem symmetrical during the initial game layout.

As wonderfully utilitarian as the trays are for tracking your resources, I do not like how sometimes the sliders that you use for keeping stats of your gold, materials and science are stubborn and do not want to fit in their slot. What this means is that sometimes forcing it into place causes the tray to bounce a little, which can be enough to bump your population cubes off of their designated slots in the tray, which means you may end up losing track of how many resources you will garnish at the end of your turn if not careful.

Other than that, Eclipse has been an overall outstanding experience for us. I do not feel that it is redundant at all having yet another space themed 4x in my collection, was is something that I did initially feel a bit worried about. Rest assured, I feel no need to sell Eclipse or any of the other 4x’s in my collection. Eclipse is no mere copycat, it truly does bring something new to the table, and is especially worth checking out if you want to have a more Euro-ish focus to your gameplay—and shockingly, this game can work well even if you do not like Euros!

After reading Jazz’s review, if this sounds like a game for you at the time of this posting Eclipse: Second Dawn for the Galaxy can be found HERE!
Find out more at BGG.
Did you Get it based on our review? Or have you played it? Please comment below letting us know!

Check out Eclipse: Second Dawn for the Galaxy and  Lautapelit.fi on: