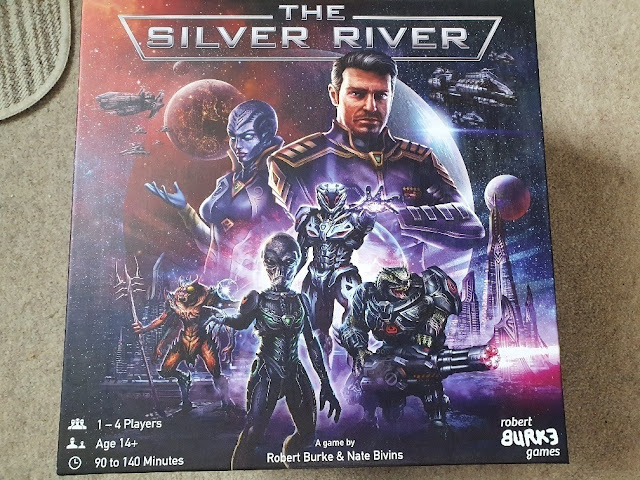 The Silver River is a 4X game that takes place in our own galaxy, the Milky Way, known in some Eastern cultures as The Silver River. The game includes Humans and different alien races, all of which some believe really exist in our galaxy. Races include:

Each race has unique special abilities that lend themselves to different play styles. The Deluxe Edition of the game adds the White Lions and the Cyborgs.

The Silver River was built to provide a rich 4X experience (Explore, Expand, Exploit & Exterminate), with all its trappings in under 2 hours.

Players will take the role of one alien civilization, and work to earn victory points through exploration, colonization, technology, civilization building, politics, war, and peace.

I backed The Silver River after watching several play throughs online, and thought this would be a game both myself, and my gaming friends would enjoy. Sadly, due to the Covid situation I haven’t been able to meet with, and play games with anyone else, including this one, since it arrived last year.

At the time of backing this, I didn’t own any 4X games, and we as a group had not really played many, but the theme looked good, set in our own Milky Way, for which The Silver River is another name used for this, and this helped entice backers in I think, as most games are set in fictional universes that don’t have any real meaning or basis in knowledge. 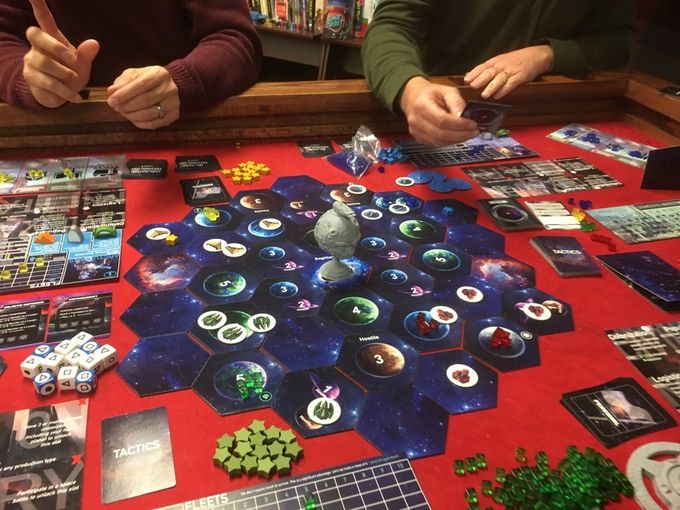 The rules are well laid out, with plenty of images on every page, showing initial table set up from 1 to 5 player count, player boards set-up, and which monsters to have ready for the game chosen.

There are 4 phases to each game round, Production, Governing, Action and End phase.

Production phase is where you gain raw production per population cubes you have in play. You can also gain production from cards, trade stations and technologies. These are placed in your raw production pile to ‘spend’ during your turn.

The Governing phase is where you assign your production to Civilization, Military, Technology and Political production depending on the actions you want to take this turn, and they can be distributed however players wish.

The Action phase is where players in turn take one action, and each player continues to do this until all players have passed.

Most actions can be done as many times as you are able to pay for it, except the ‘activate a fleet’ action which can only be done once per full turn.

Once the last player passes, regardless of turn order, the ‘Age’ is over. The game ends at the conclusion of the 4th Age. 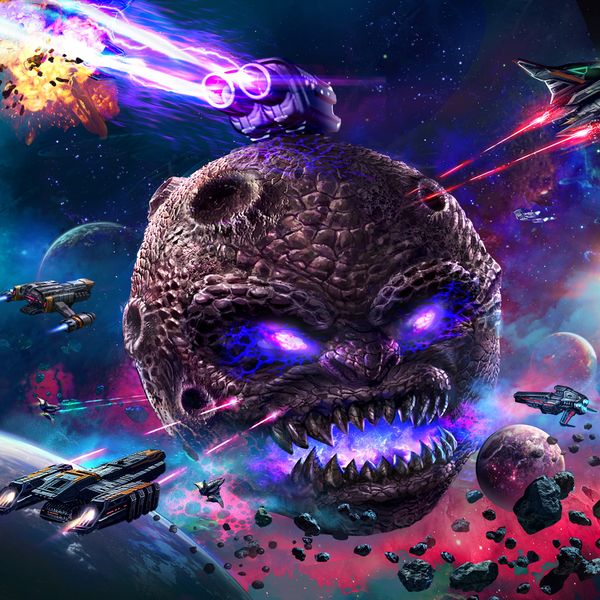 As stated before, the theme is one that drew me in to the game, and the mechanics will I’m sure lend itself to exciting game play with higher player counts, but I can see that at maybe 2 players it could get a bit ‘samey’ as actions will come around quickly, and the lack of other players doing things to thwart your plans may be a negative, but only a small one. I personally like having plans and then having to adapt them due to other players actions before I get to carry out that plan.

The game mechanics themselves seem sound, but until I play with a group I only have the videos and play throughs to gauge this on. 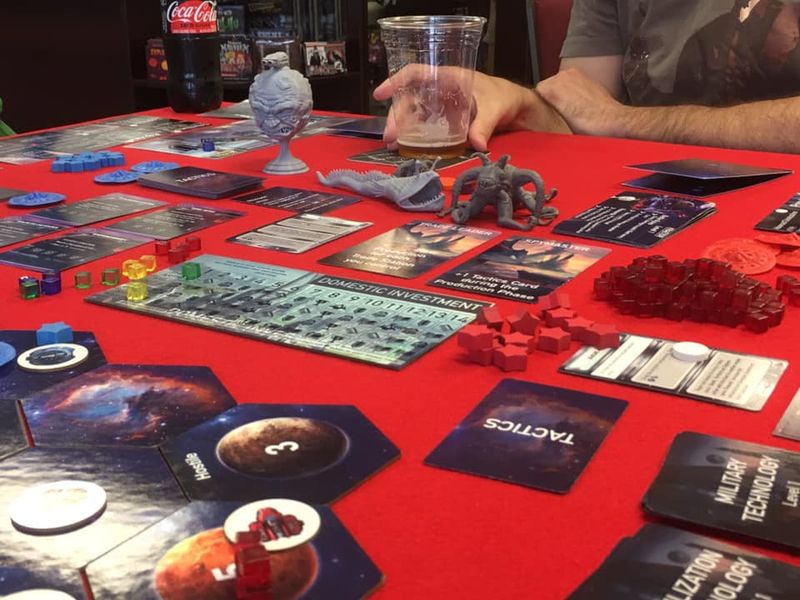 Again, gameplay is something I can’t comment on too much, and can only say how the solo mode went, which for me wasn’t great. There are 2 solo modes in the rules, and I have played both, and didn’t really enjoy either, and probably will only play once or twice more, just before playing in a group just to remind myself of the game play and the round actions etc.

The standard set up and game for me wasn’t balanced, and I’m not a fan of solo modes that just say ‘score a set amount of VP’s by the game end to win which this does, or defeat a level 5 monster.

The second solo mode is to defeat a monster of each level from 1 to 5, and if you ever lose a battle against any of these you lose the game.

Again, not a fan of this mode, and I found it to be ‘lazy’ in it’s objective, and not much thought had gone into it.

For me, I like solo modes where the AI player is controlled by cards, like those from Garphil Games, i.e. Raiders of the North Sea or Architects of the West Kingdom, or a board like Anachrony, the best solo mode of it’s type I have played.

Both solo modes in this, for me, showed a lack of effort in giving the player an all round experience when playing against others wasn’t an option, and I sincerely hope the designers revisit the game and add a better set of solo options asap. 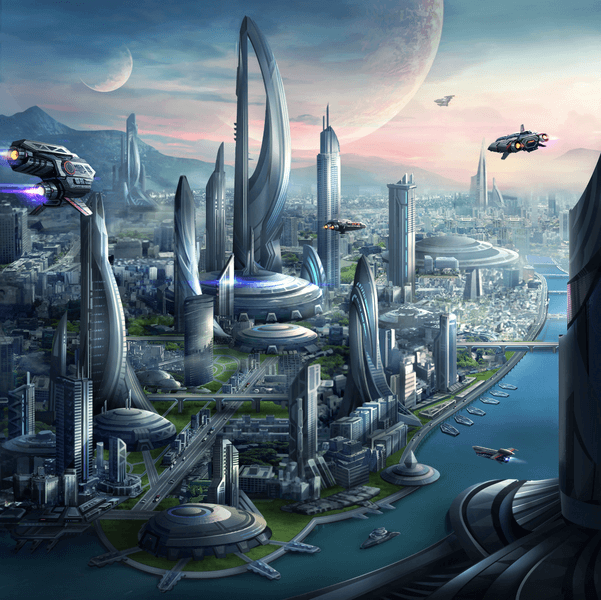 The artwork is good, both in the rulebook, and on the cards and boards, but for me the components are a big let down as the upgrade on ships went from cardboard tokens to plastic discs that you have to put numbered stickers on to show which fleet it is.

The cubes etc., are pretty generic, and I have bought my own ships to use instead of the plastic discs. 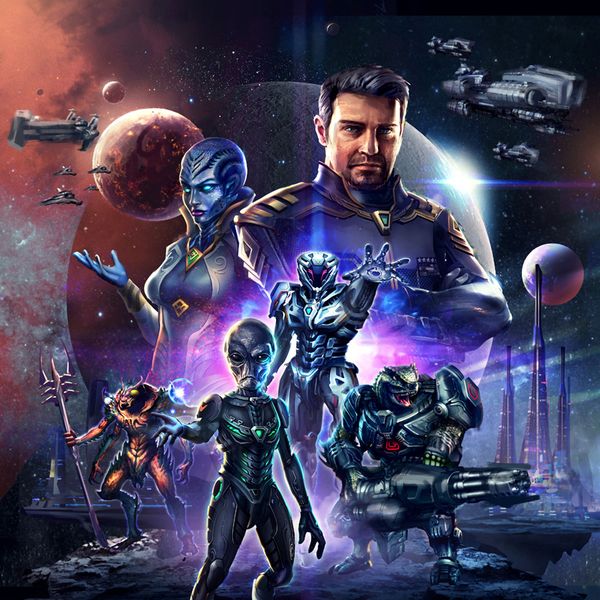 The overall game is ok for the cost, but I would not have wanted to pay any more for it, based on the above. It remains to be seen if I keep it in the long term, and this will be determined after the first couple of plays with my group of gaming friends. I have since bought Eclipse 2nd Dawn, and the differences are vast in quality etc., but this is also reflected in the higher cost of Eclipse.
The Other:

If the components and solo mode had been a bit better, then this game would be excellent, but currently I can only give it 2.5 / 5 based on playing solo, and the component quality for the ships etc.

Is this game worth getting,… for solo mode alone, no, for playing in a group, I hope it will be, but until I get it to the table with 4 or 5 players I can’t really say yes or no.

I would say, watch the online video game plays, and make your decision based on what you see and get a feel for. It might not be for everyone, but it’s definitely a game I would suggest you play in a group, if you get the chance. 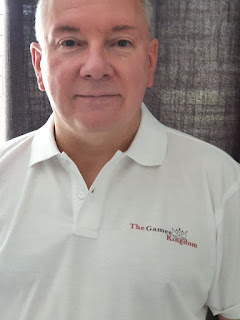