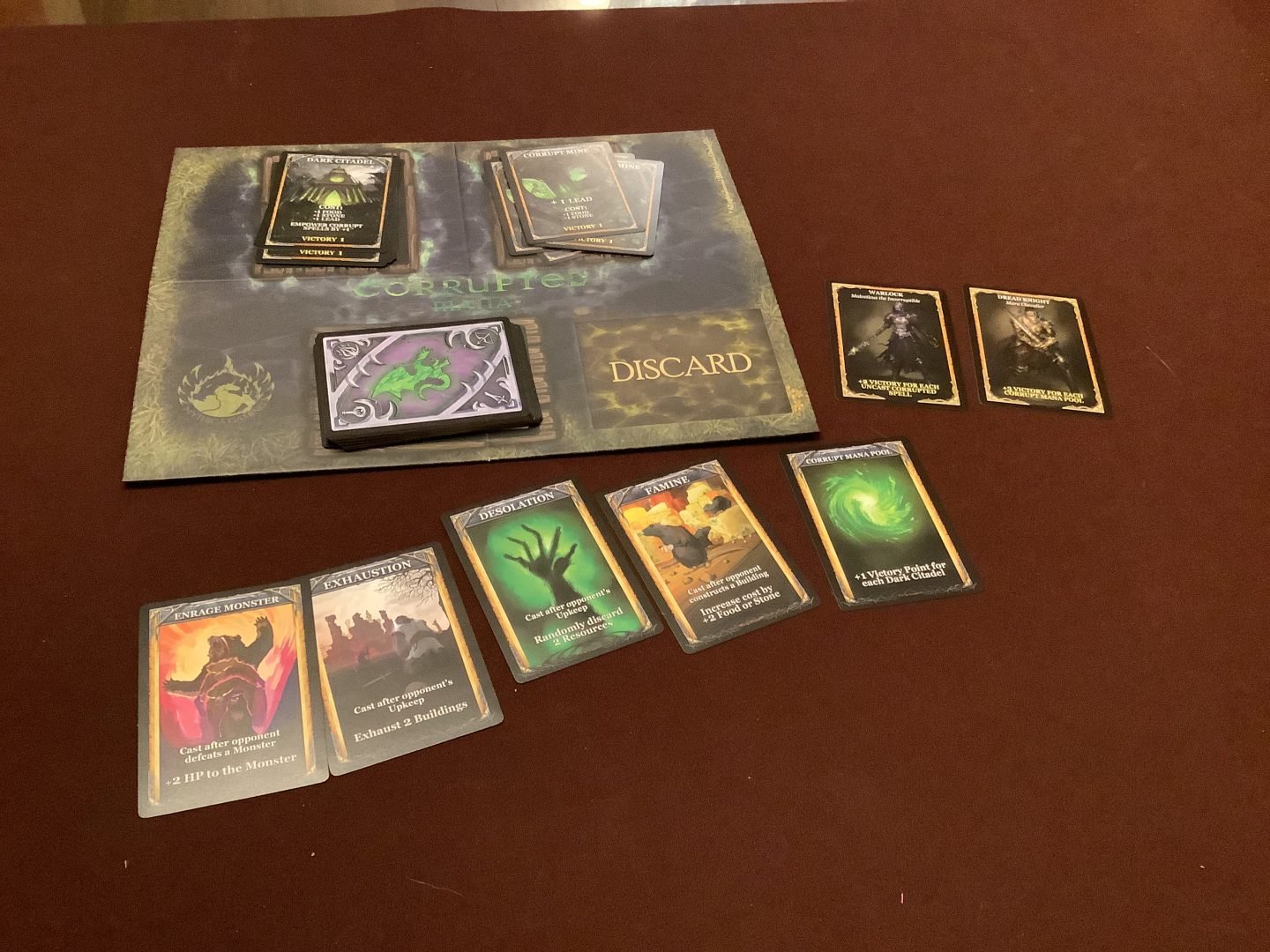 See what I thought of the Base Game Here!

From the Publisher:
Corrupted Mana is the first expansion to the HIT GAME Legends of Draxia. Corrupted Mana is an aggressive player vs player expansion, filled with an arsenal of spells that are sure to cripple your opponents. Two new Characters are being introduced who are as corrupt as the mana itself.

Review:
Overview:
When I received my copy of Legends of Draxia, it came with the first expansion, Corrupted Mana. I love games with expansions. I thoroughly enjoyed Draxia, and I was eager to see what Corrupted Mana added to the game.

To set up, simply shuffle the new resource, lead, into the Resource Deck, add the two new heroes into the Hero Deck, and place the new board at the top of the original, sorting out the new buildings (Corrupt Mine and Dark Citadel), and shuffle and place the new Corrupted Spell (silver with purple backgrounds and a green dragon on the back) cards on their spot of the board.

The rules maintain their simplicity from the original game with more buildings to choose from and new spells to cast.

The same two actions remain. The only change being that a Corrupted Spell can also be bought as many times as a player has resources for, two lead are required.

Legend of Draxia’s theme and mechanics remain intact and run throughout this expansion.

On a turn, a player draws two new resources cards to add to their hand, and this time Lead could be a resource. It is used in conjunction with Food and Stone from the base game to construct a Dark Citadel. A standard food and stone constructs the new Corrupt Mine which produces lead. One new aspect is the corrupted spells. When a Undead monster is defeated, a corrupted spell may be taken in lieu of the regular spell. These spells typically spell (get it?) disaster for your opponents.

Sadly, there are no new enemy monsters to battle in this expansion. There are, however, some coming in the next expansion Monsters of Nairu coming in 2023.

The game still employs the same ending as before: all 10 Cathedrals are built or all 27 monster have been confronted (not killed).

The artwork is by Danai Kittiwathana again, and it continues to build the fantasy world of Draxia amazingly. This expansion fits seamlessly into to the base game.

Corrupted Mana maintains the same level of production. The gameboards are nice and thick. The cards are high quality. I think I will sleeve mine as they are the main component of the game.

Adding another few heroes, a new resource card, a new spell deck, and two new buildings doesn’t seem like much. However, it adds a lot to the gameplay. The new corrupted spells add player interaction that was missing from the base game. I enjoyed the base game so much, that I did not notice this was missing until I added Corrupted Mana. These five new spells include four ways to disrupt your opponents’ well laid plans. The spells get stronger with more Citadels the player has constructed. For instance, the spell Enrage Monster adds two hit points to the monster being attacked. An additional hit point is added to that for each Citadel. So, if a player has two citadels, then the Enrage Monster Spell adds 4HP to the monster. This could make the Dragon very difficult to defeat. The fifth spell is a corrupted mana pool which is worth one point at the end of the game for each constructed Dark Citadel. Very vicious. Very fun.

The biggest detractor for Corrupted Mana is the added playtime. A fun and quick game now takes at least an hour, even with two players that know the rules. The enjoyment remains, it just takes longer to complete.

My “biggest complaint” remains, I have to wait until at least the end of Q1 2023 for the next expansion! Patience is not my strongest virtue. I want it NOW!

When the son and I sit down to play Legends of Draxia, we must make the decision whether we want to invest an hour and add the expansion, or not. I’d say we are about 50/50 on it. That, to me, means that this expansion is totally worth the purchase.

After reading Adam’s review, if this sounds like a game for you at the time of this posting LEGENDS OF DRAXIA
is available for purchase at MythicaGaming for only 29.99 and the EXPANSION: LEGENDS OF DRAXIA: CORRUPTED MANA ($24.99). Check it out and pick up your copy HERE.
Find out more at BGG.
Did you Get it based on our review? Please comment below letting us know!