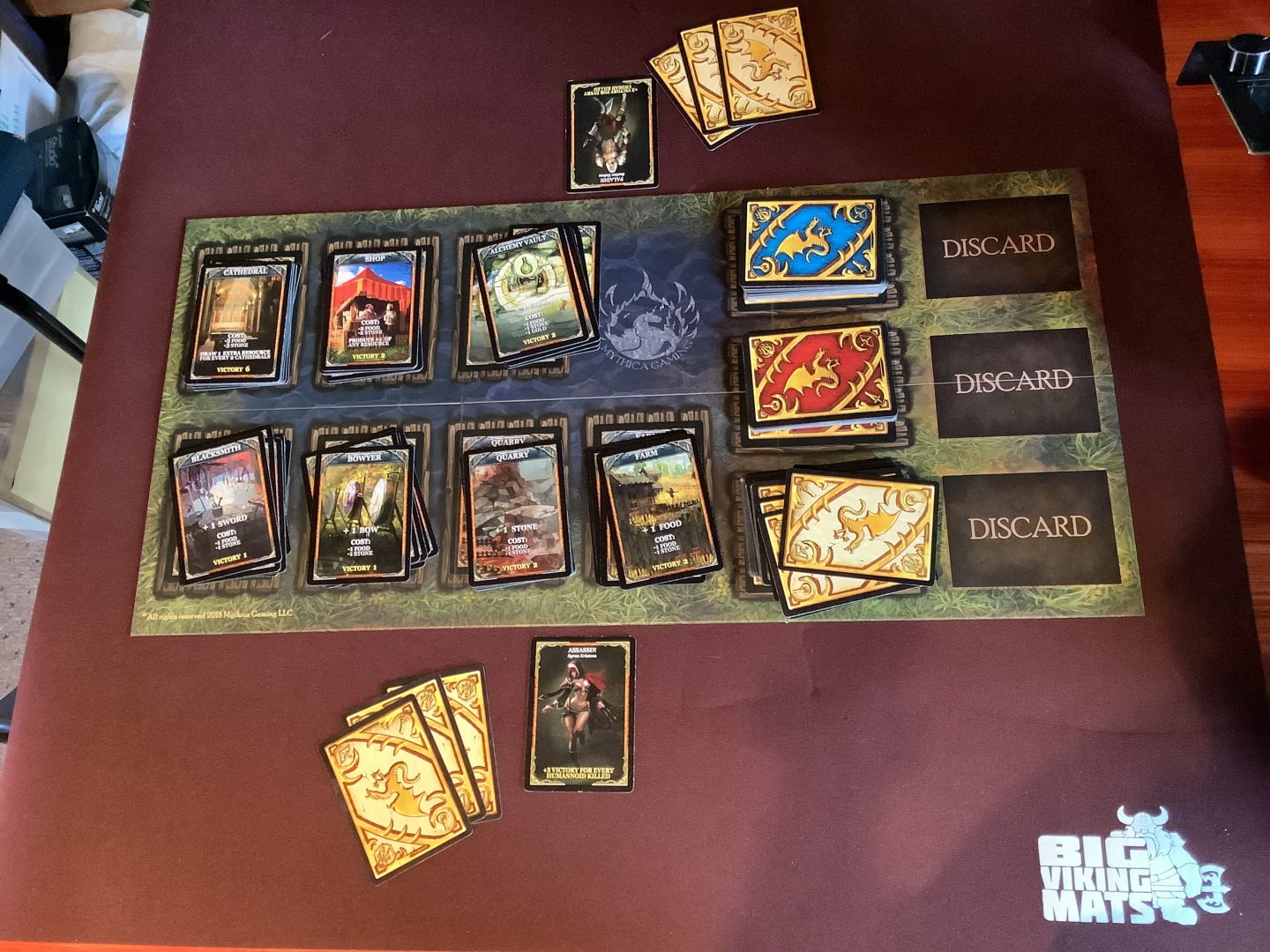 Players will pull 3 random cards from the character deck, each with a secret end-game bonus, and choose one, discarding the others. Players take turns pulling two resource cards from the main deck into their hand. Based on what resources they have in their hand and from any buildings they have built, players can buy spells, construct buildings, or fight monsters. Resources must be wisely spent while not exposing the player’s secret end-game bonus.

Game ends after all cathedral buildings are constructed or monster deck is exhausted. Players tally points for the buildings they constructed and monsters they have destroyed, along with the end-game character bonus. Player with the highest points wins.

Disclaimer: The publisher provided the copy of LEGENDS OF DRAXIA. The opinions expressed in the review are completely my own.

Overview:
I have enjoyed the first two games that I have played from Jimmy Sanders and Mythica Gaming. So, when he asked if I would review a third game, oddly enough his original game, I was more than happy to do so. I met up with Jimmy at a convention at which he had a booth, and we chatted about conventions and gaming. He handed me his game, Legends of Draxia, gave me the elevator pitch, and then the first expansion, Corrupted Mana, and I was on my way back home. It was a great 30 minutes. I remembered, too, that Legends of Draxia had an app, and I loaded it on my phone, too. So, was all this worth it? Let’s find out.

Setup was quite simple. Set the board in the middle of the playing area. Sort the cards by their backs. Sort the green-backed cards by type. Place all the cards on their matching spots on the boards. The ones without a spot are the Hero Cards. Shuffle and deal 3 to the first player who selects one. Shuffle the remaining and deal 3 to the next player. Continue until all players have a Hero Card. To complete set up, deal each player 3 resource cards (the yellow back).

The rules are just as simple. On a player’s turn, draw two resource cards and add them to your hand. Then choose an action: Construct a Building (green back) or Battle a Monster (red back). You can choose only one. The other option is to buy a spell (blue back). You can always buy a spell, and as many as you can afford. When a player has exhausted all options, or chooses to be done, play rotates clockwise.

Legends of Draxia takes place in the realm of Draxia. The art heightens this theme nicely. Each of the heroes has a unique scoring bonus. The mechanics of building your hand and your tableau to bolster this scoring bonus drives this game. They all work together in synergy to give the game a smooth play that changes with each game.

When selecting a Hero, it is imperative to look at its scoring bonus. This will dictate how the player should approach the game to maximize points. For instance, the Bard scores 10 points at the game’s end if the player has built all 7 buildings. This can be 20 points if 2 of each is built, and so on. This is a strategy to win, for sure, as each building is worth points (1,2 or 6). Other Heroes score based on certain types of monsters killed, total monsters killed, spell cards not used, or certain buildings built. Each Hero has a different strategy to collect bonus points.

On a turn, a player draws two new resources cards to add to their hand. When, not if, the pile runs out, shuffle the discard pile. The player can now choose to construct a building, paying the cost listed on the card, or attack a monster. When constructing a building, the cost is listed. This cost can be paid out from the player’s hand or by utilizing a previously constructed building. For instance, if a player had a Quarry built, it produces a Stone, so only a Food resource card would be required to build the Farm.

When choosing to fight a monster, the player flips the top monster card from the deck. That is the monster being fought. If it is a beast (yellowish background) Bows do 2 hit points of damage, an Undead (blueish background) Bows do 0 damage, or Humanoid (reddish background) bows and swords do 1 hit point each. The player must meet or exceed the hit points of the monster which appear in the upper right (1HP to 8HP) to defeat it. Otherwise, the player must flee discarding the monster card. If defeated, each monster has a bonus at the bottom. Some are automatic, some require a resource card to be discarded. Humanoids defeated allow the player to fight additional monsters. String these together to go on a huge killing spree!

If at any time a resource is required and you don’t have it in hand, and cannot produce it from buildings, any two resource cards in hand can be discarded to make up for it. Two food can be a Bow. A sword and a stone can also be a bow.

Buying spells is the last option, and they can be very beneficial. They could be Mana Pools that score at the end based on the amount collected. Wish fills in for two resources or 1 gold. Fireball is 3 damage to any monster. Fabricate reduces the requirement for construction of any building by 3 resources. And then, there is my favorite: Haste allows the active player to take an immediate second (or third, or fourth) turn.

The game ends in one of two ways: all the 6 point Cathedrals are built or all 27 monster have been confronted (not killed). It is important to note, for each two Cathedrals built, an additional resource card is drawn at the start of the turn. Both of these end game scenarios can be sped up. There are only 10 Cathedrals. You can also confront a lot of monsters and not kill them just to end the game if you feel you have the most points. Both are risky strategies as you don’t know your opponents’ hero.

The artwork by Danai Kittiwathana builds the fantasy world of Draxia amazingly. Each card looks beautiful. There are 12 different heroes, and each look unique, but in the same universe. The art looks cohesive. Each illustration looks like it belongs in the game.

Legends of Draxia is a very well made game. The gameboards are nice and thick. The cards are high quality. I think I will sleeve mine as they are the main component of the game. You could play without the board, if you wanted to. I never want to do that. I like its table presence.

Legends of Draxia was an easy to learn, even if we played a few rules incorrectly, deck building hand management game. The Son and I loved it. We immediately opened the expansion, Corrupted Mana (review coming), and played that version as well. The added cards make for some interesting decision making. Corrupted Mana does add considerably to the playtime. Of course, you could ignore this whole new deck of cards and just play the base game deck to try and reach the end game quickly, but your opponents will decimate your plans. Its this kind of balance and decision making that makes Legends of Draxia enjoyable.

The rules are a bit clunky and could use some smoothing out and clarification. If it weren’t for the app, I would still be misplaying the game. I know that Jimmy is looking at a new print run of Legends of Draxia, and I am sure that he will correct these.

Lastly, and probably my biggest complaint, I have to wait until at least the end of Q1 2023 for the next expansion! Patience is not my strongest virtue. I want it NOW!

When we played it with all the correct rules in place, The Son beat me soundly. So, this required me to go back and rethink my strategy, aka play the app. I then beat him soundly. So, I recommend getting and playing the free app to make you better. Also, I recommend purchasing this entertaining game of risk versus reward. As I mentioned, this is the third game from Mythica Gaming that I have reviewed, and so far, they are 3 for 3! I look forward to the next expansion and any future games!

After reading Adam’s review, if this sounds like a game for you at the time of this posting LEGENDS OF DRAXIA
is available for purchase at MythicaGaming for only 29.99. Check it out and pick up your copy HERE.
Find out more at BGG.
Did you Get it based on our review? Please comment below letting us know!