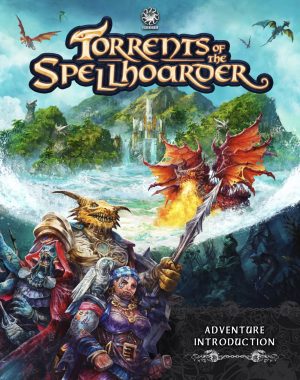 Quick Look: Torrents of the Spellhoarder / Crown of the Oathbreaker

A high-level DnD 5e adventure and setting in the underwater kingdom of A’rvanshy and the dragon Isles of Xantharos.

Disclaimer: The publisher provided the pdf prototype copy/copy of Torrents of the Spellhoarder / Crown of the Oathbreaker. The opinions expressed in the review are completely my own.

I love DnD 5E, but did  I ever mention how sick I am of WoTC constantly rehashing old material for the Forgotten Realms? (*Hint, yes I have!* Please check out my reviews of Rappan Athuk, Tome of Beasts, Tanares RPG, The Hallowing of Ground, and Tasha’s Caldron of Everything (in EBG Magazine, issue 3) to hear more of my rants on this subject!).

The ultimate takeaway from those reviews for those who lack time to read them is that I firmly believe that the future of DnD lies with 3rd party writers.

The reason why largely has to do with original content that hasn’t been recycled over and over again for the past 30-40 years. As a DM (and the rare occasions where I am a player), I do not want the safety and comfort that pre knowledge of your environs can provide.

And it does get tiring already knowing the general plot lines of settings such as Curse of Strahd, Dungeon of the Mad Mage before I have even played the campaign, having already engaged in previous incarnations of them.

As such, I turn consistently to alternative content for my DnD fix.

Torrents of the Spellhoarder is currently running on Kickstarter with just a few days remaining, and while I do not have access to the full material for the purposes of this review, I do have the Adventure Summary to purvey as DM material. I have also been granted the full digital files for Crown of the Oathbreaker to give me an idea what a “full” campaign may look like.

I will do my best to avoid spoilers, and speak only in general and vague descriptions as much as possible.

Torrents of the Spellhoarder begins in a primarily sea-faring / maritime setting. The first thing that I noticed as a prospective DM / player for this campaign is that it is going to provide some great use for “useless” 5E feats and proficiencies that most players probably never pick. It may even be supremely advantageous to “think outside of the box” as a player in this regard. That is definitely a big perk.

The second thing that I noticed (which I should have noticed in the first place!) is that this is no low level cakewalk! And this is quite a blessing actually, because I would say conservatively that at least 90% of the DnD source books out there are written for characters that are levels 1-12. It can consequently be a pain to find things to do for characters once they hit later stages of character life.

Torrents of the Spellhoarder has a minimum level requirement of 15! Thank God there is finally an organized setting where players can fully unleash all of their abilities for once!

Narrative wise, I have been able to look at the whole synopsis of the storyline (not individual chapters, but a birds’ eye view of the campaign and its progression), and overall it looks very promising, roughly equivalent to what I have seen in Tanares RPG (and that was some really good world building!). Without delving into the story too much, it starts with a sea journey, and involves a treasure, a shipwreck, an altercation with a Sea Kraken and more.

Simply put, it throws you right into the action, which is to get sense of immersion going!

The art is also fantastic! I would say it stands out with a flair that not even WoTC puts out on their materials, which I find to be comparatively droll.

Now the next thing I need to talk about is a secondary product of Elderbrain, Crown of the Oathbreaker, and I believe this was provided to me in addition to the sample of Spellhoarder so I could better gauge what the complete product and storyline may consist of for Torrent of the Spellhoarder…

…and I am truly at a loss of words when it comes to describe the material for Crown of the Oathbreaker.

Simply put, I cannot think of any tome or campaign in the DnD world that is larger than the materials in Oathbreaker.

Capping out at more than 940 pages, I was first presented the opportunity to review this material a few weeks ago, and was expecting the more normal 250-400 page range for such troves. I thought that I had the largest campaign book out there (Rappan Athuk , about 500 pages of content derived from several decades of work), but I was wrong. 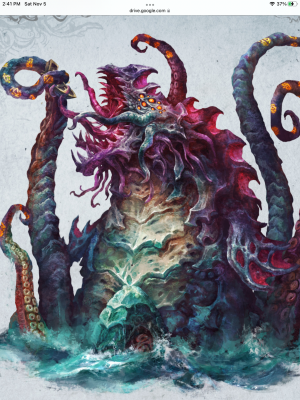 Now I did not get to look at everything in this book exhaustively, as I had underestimated the scope of the offering before committing to the 2 weeks I had left before Spellhoarder’s Kickstarter deadline expired, but I have looked at it enough to know that this is easily the stuff that DnD dreams are made of. DM’s and players looking for a world and campaign that you can be stuck in for years need not worry—this will definitely be able to occupy your sessions for years to come, much like the previously referenced Rappan Athuk.

It is truly jaw-dropping. Everything from the maps to the NPCs has been exquisitely detailed, with a whole open-world sandbox with a rich and tragic Angelic world history shaping the modern events of your gaming experience. New items, spells, subclasses and more abound, breathing much more life into the setting.

If even a fraction of this monstrosity of volume manages to carry over to Torrents of the Spellhoarder, I think most gaming groups could easily spend a real number of years in this setting.

Now granted that the material for Spellhoarder is for level 15-20, I am guessing that well, maybe you won’t spend quite as much real-life time in this world as much as you would if you started from level 1 in another setting, but that is the thing…

Spellhoarder is a DIRECT CONTINUATION of Crown of the Oathbreaker!

For me, what this means is that you could conceivably spend the entirety of your DnD adventures exclusively in this setting!

For me, this represents the very first homogenous, self-contained journey / pathway I could own could take a group from low levels all the way up into the stratosphere near level 20. (Well, technically Oathbreaker starts at around level 5, but has some recommendations for sidequesting up to the required / recommended levels. No biggie for me there, as I have a plethora of material designed for low levels that can be used in just about any setting, as I suspect most DM’s do.)

Now maaaaaybe. Just maaaaybe, WotC has finally made some level 15-20 material that could be used to tie lower level adventures together. But as of 2 years ago or so, I had kinda gotten tired of waiting for such a link, so I gave up on them. So maybe such material exists already, but again, for me personally, this is a first.

Other things that I love are that they are selling maps and decks of cards with player option / abilities. One can never have too many handy references available, as nothing can slow your games down as much as incessantly paging through your source books looking for spell, item and ability descriptions!

All in all, given my own past history of DnD purchases and what I have seen presented to me for this review / preview, I think anyone who invests in either Crown of the Oathbreaker or Torrents of the Spellhoader is not only getting a great value, but in actuality far more than what you are paying for. The sheer amount of work that must have gone into this production is truly boggling, and in many respects I think that the folks at Elderbrain may just be selling their product short at the prices they are offering. My advice to anyone looking to expand their DnD world is to look through these campaigns with serious consideration. But don’t take too much time, as there are mere hours before the campaign on KS ends, and at the time of this writing, it is uncertain as to whether or not they will be taking late pledges!

After reading Jazz’s review, if this sounds like a adventure for you at the time of this posting Torrents of the Spellhoarder
will be live on KICKSTARTER until Wed, November 9 2022 7:58 AM PST, and has surpassed its funding goal of $20,000. Check it out and back it HERE.
Find out more HERE.
Did you back it based on our review? Please comment below letting us know!