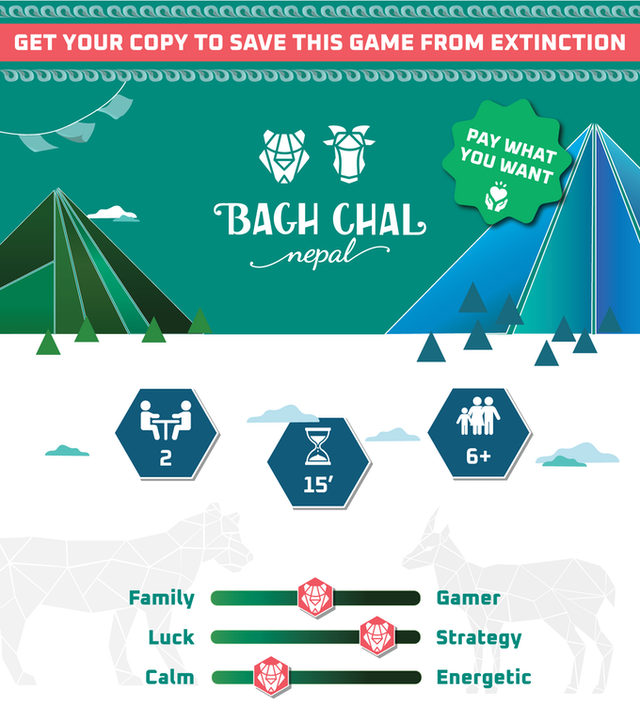 Bagh Chal is a traditional abstract game that is popular in Nepal. The name roughly translates to “Tigers Moving”. It is an abstract strategy game with an asymmetric setup, i.e. a different number of pieces per side (like Hnefatafl and its ilk). One opponent plays four tiger pieces and the other plays twenty goats.

In the lush pasturelands of the Kathmandu Valley, shepherds wander peacefully with a herd of goats. But tigers roam nearby, on the hunt for stray animals. The tigers are swift, but when the goats unite, they can overwhelm their predators. Who will win in the fight for survival?

Disclaimer: The publisher provided the prototype copy of Bagh Chal. The opinions expressed in the review are completely my own.

Overview:
One of the first games I reviewed for Everything Board Games was by Lemery Games. That game was Chili Mafia, and my family loves it. When they asked me to review their next game, I was eager to do so. Then, they tell me that the game is Bagh Chal, and that it is close to extinction. I have read many books on the history of board games, and I would hate to see a game being lost forever. Lemery is running a “pay what you want” Kickstarter campaign. One reward tier. Pay anything. Receive a copy of this centuries old game!

The goat player then places a goat on an intersection of lines currently unoccupied. The tiger player then moves a tiger one intersection. Alternating continues until the goat player places the last goat token. However, during the placing of the 20 goats, a tiger can capture a goat! Also, the goats could be placed to block all legal moves of the tiger trapping it. If the tigers can capture 5 goats, they win. If the goats can trap all the tigers, they win.

The theme fits based on its country of origin. It could be adapted to fit any culture or theme. I enjoy the tiger versus goat theme though. Mechanically, Bagh Chal shines! It works like a more strategic checkers game. With the sides being asymmetrical, the mechanics work even better. The first game I played, I thought the tigers were extremely overpowered. But then, I played again and realized that not only are they not overpowered, the goats might be. Of course, I played a third time. It turns out, the game is in perfect balance.

During the alternating phase, each side vies for supremacy on the small game mat. The tigers try to capture goats before they are overwhelmed by them. The capture, a tiger can jump over a goat to an unoccupied intersection in line with the tiger’s starting position. Think capturing in Checkers. The goat player must be strategic in placing the goats. Think moves ahead. Once all the goats are in play, the goats move on intersection like the tigers. The goats cannot jump each other or the tigers. They cannot capture any tigers. The only piece of advice I will give is, as the goat player, do NOT be afraid to sacrifice some goats for the betterment of the herd.

To say that Bagh Chal is an elegant game would be an injustice. Bagh Chal’s beauty astounded me. The goats and tigers are represented by screen printed wooden tokens. The double sided microfiber board, again, is elegant and beautiful. Lastly, it all comes in a nice satin drawstring bag sized to travel. Honestly, this version of Bagh Chal is very well produced, and worth every dollar you can give to get it.

Bagh Chal plays in 20 minutes. It plays quick enough that you and your opponent can switch animals and play again immediately. Teaching it is quick and easy. It has high strategy. And then, the production value is simply amazing. It all packs down into a small bag that can easily be taken on trips or to the restaurant.

I have zero complaints with Bagh Chal. Not only did Lemery Games give you this amazing game that is millennia old, BGG lists it as from 1000, but if you flip the mat over, the Indian version Puli Meka can be played. Two games on one board and set of tokens. What is there to complain about?

Bagh Chal proves that there is still a place for older games in today’s gaming world. It proves that a game does not need tons of cardboard parts and pieces, dice, figurines, and the like to be a classic game. Bagh Chal shines in its simplicity and strategy. When this hits Kickstarter, it is well worth your money. Give lots! Get lots of copies! Bagh Chal deserves to not only be remembered, it deserves to be shared!

After reading Adam’s review, if this sounds like a game for you at the time of this posting Bagh Chal will be live on KICKSTARTER until Tue, July 26 2022 8:00 AM PDT, and has surpassed its funding goal of $1,000. Check it out and back it HERE.

Check out Bagh Chal and Lemery Games on: