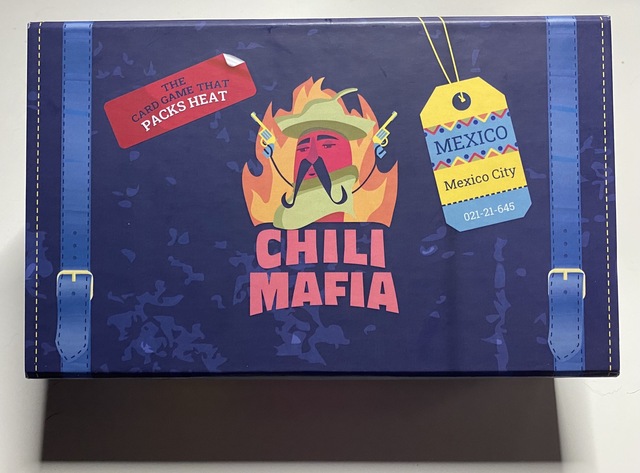 
Chili Mafia is a set-collection party card game for 2-8 players. Compete to assemble the most powerful Chili Pepper Gangs (sets of cards) and become the most respected mafia boss. To win, score the most points at the end of the game.

Things are heating up in the world. Chili peppers are splitting into factions, leading to organized crime and unrest. The Chili Mafia reigns supreme.
The Ministry of International Chili Security has hired you—a group of agents—to work undercover and round up the most wanted chili pepper mafiosi from around the globe. Your goal is to bring them to Mexico for a peace summit.

As you arrive in the Chihuahuan desert, the spicy criminals jump out of your luggage. It’s obvious they have no interest in peace. Instead, they want a showdown. You and your fellow agents have no choice but to seize control of the Chili Mafia. But to gain their respect, you must fight amongst yourselves to determine who will be the most powerful mafia boss. Once you control the peppers, what will you do next?

In Chili Mafia, you will find existing Chili Peppers from around the world that are the main characters of the game. Just to mention a few, such well-known Chilies as the Jalapeño, the Tabasco or the Carolina Reaper clash with each other. To reflect hierarchy, each pepper carries points that are in proportion to the respective Chili Pepper’s strength on the Scoville scale. Moreover, the game includes various action and attack cards (inspired by Mafia jargon) that will not necessarily serve your interest..

Disclaimer: The publisher provided the prototype copy of Chili Mafia. The opinions expressed in the review are completely my own. 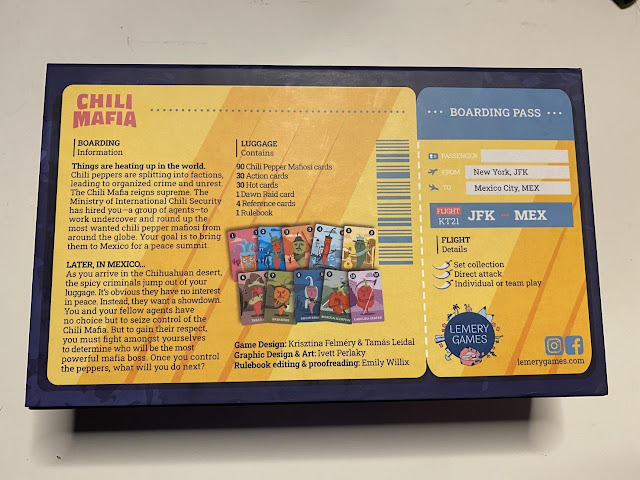 Overview:
So, it has been a weird year in my household, and The Wife and I have watched a lot of gangster films: The Godfather Trilogy, Goodfellas, Scarface, and we started rewatching The Sopranos. We also like spicy foods and salsas. So, when Chili Mafia popped up, I figured I had to give this game a try, and it would not be hard to convince The Wife to play along with The Son and me. And it wasn’t. While we only travelled to the dining room table instead of the Chihuahuan desert, we prepared for a showdown of peppery heat.
Rules & Setup:

The setup depends on the player count. If you have 2-4 players, only play with the cards with 2 peppers on the back of the cards. If you are playing with 5-8, add in the cards with 4 peppers on the back. Hand each player a reference card (especially for the first few games). Next, deal each player 6 cards. Each player then selects one card, passing the rest to the left. Continue until out of cards. Now that all players have their 6 cards for the starting hand, the Dawn Raid card needs to be placed in the deck according to player count. Stand the card up, and then place it roughly where the top of the color matching the player count touches the draw pile.

The theme of traveling to Mexico for a Mafia war using peppers as soldiers is fresh. I can honestly say that I have not seen this one before. It is a cute theme that is wonderfully brought to life with attention to detail and artwork. 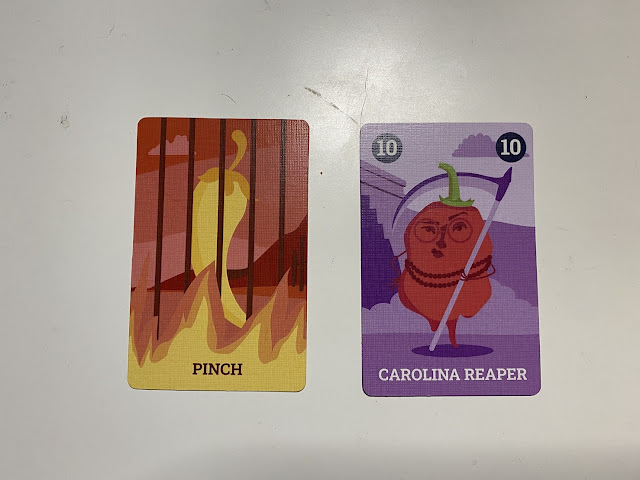 The mechanics are a combination of card drafting and set collecting. There is some take-that in there, along with hand management. All of this work well in harmony to create a nice game flow.

While a little clunky on your first time through (making sure that everyone is following the rules), Chili Mafia speeds up with each subsequent play. After the card draft from the setup phase, the first player is the one who most recently ate a hot pepper, normally The Wife. On a turn, a player may play as many cards as they are able and want to play. Cards may be played to make a new gang, add to an existing gang, play an action card, or play a hot card.

To form one of the two types of gangs, the player must play three or more cards that either are all the same (Brotherhood Gang) or all different (Mixed Gang). Adding to existing gangs only requires that these rules be maintained. If a mafia ever drops below two members, it is no longer a complete gang and will not count for certain things, like end game scoring. So, maintain your gangs! 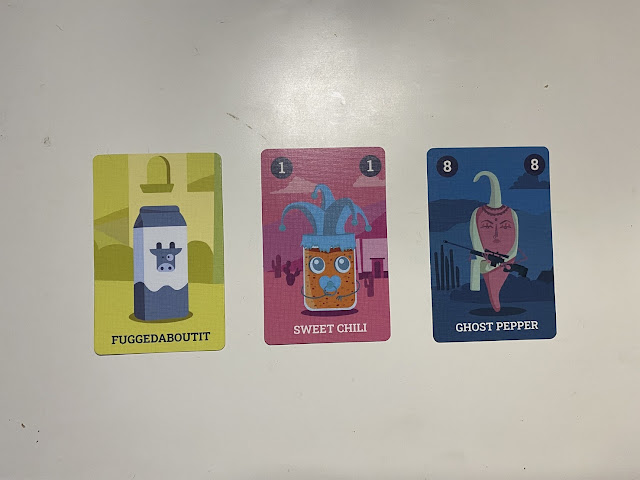 Playing an action card (green-yellow color) simply requires playing it into the discard pile and taking its action. These are all listed nicely on the reference card. Again, this is one game where I highly recommend that you give each player a reference card. These action cards could allow the player to draw two cards, call a number and all players must hand over peppers from their hands matching this number, or even take a card from the discard pile. There is a special one, the Fuggedaboutit card, that will allow its holder to block any hot card. These are the only cards that can be played out of turn.

Hot cards are the red cards. The active player can play as many red cards as they have mafia gangs in play. The mafia gang must have at least three cards. Now, a specific pepper in the gang is selected to take the action against a selected pepper of an opposing gang of equal or less value. If the player being attacked has a Fuggedaboutit card, and chooses to play it, the hot card is blocked. Otherwise, the attack is successful, and its corresponding action is carried out. This can be that the attacked pepper is whacked (discarded), pinched (put in the middle of the draw deck), or even becomes a turncoat (joins the attacking mafia).

After the active player completes playing all the cards desired, two cards are drawn and play passes to the left. If the active player has no legal moves, or chooses to not play a card, they must discard one card and draw two new ones. Newly acquired cards cannot be played until the next round.

When the last card is drawn from the draw pile, the last round begins. No more cards can be added to hands, but cards still in hands may be played. The last player is the one who drew the last card.

Final scoring now takes place. Simply add up the point values of the mixed gangs. Then, all Brotherhood gangs are added and then doubled. The highest score is the new Mafia Boss.

The artwork by Ivett Perlaky is simple fantastic. She gave each chili its own personality. Like the Sweet Pepper, the lowest level and number pepper, is a baby. As you get hotter on the Scoville Scale, the peppers begin to look a leaner meaner, a little nastier, and a littler more ruthless. The Carolina Reaper, level 10, is carrying a scythe and ready to take your soul. 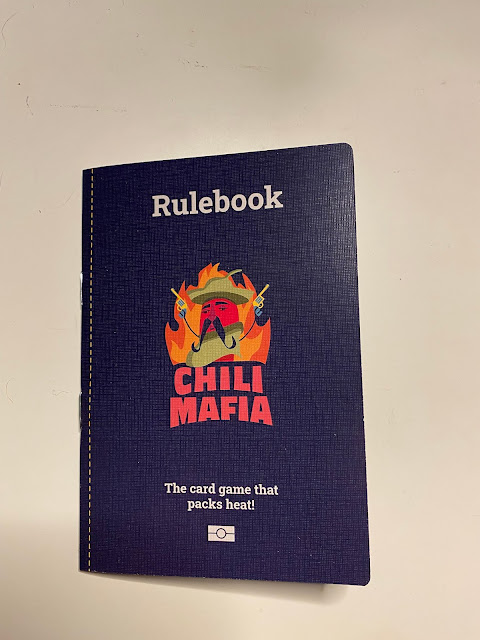 The rulebook has a passport feel to it, and it is really nice. This helps to heighten the feel of the game being a game where you have travelled to compete.

The cards are linen finish but feel a bit flimsy. The box is magnetic with space for the playmat and additional cards that are all part of the Kickstarter campaign. And I want those cards, and probably the playmat since there is room in this nice box to hold it all. I am not greedy, I just want it all! The overall artwork on the box makes it look like a suitcase. The back looks like a boarding pass. 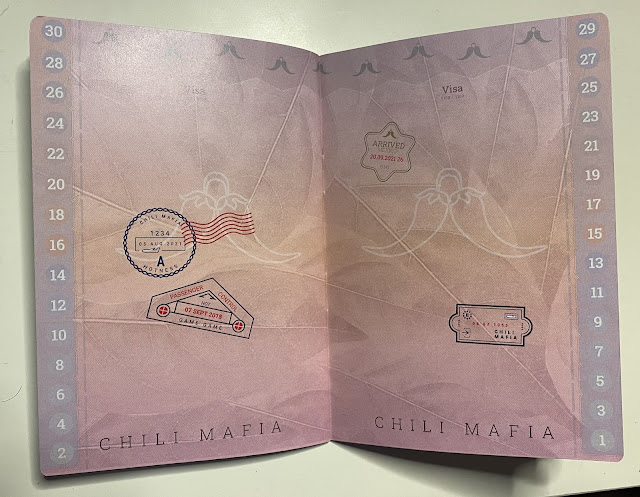 Where to start? Chili Mafia is the rare game in that it is exactly what I wanted it to be. I was hoping for a fast-paced game that had enough strategy and replayability built in. With the Kickstarter campaign unlocking more cards every day, the replayability is just skyrocketing. I cannot wait to get ALL the cards and have an all out Mafia war!

My only real knock on Chili Mafia are the cards. They are a nice linen finish, but I worry that they will wear down faster than a normal deck of cards. This would be fine for a game that I do not think will see a lot of table time, but I can already see this game being added to the “game-before-bed” rotation.

Note: This was a prototype copy of Chili Mafia so this could possibly be improved upon by delivery time

The Son loves to play board games. Like, maybe a little too much…? Nope. That isn’t possible. Anyway, we have a few games that The Wife will play with us before he heads to bed. After our first few playthroughs of Chili Mafia, it was obvious that this will be added into our rotation. The mix of fun, short game time, and replayability really make for a perfect game to play before going to dreamland. According to one of the playthrough videos, this is the first of many games in this world travelling set. Sign me up for the next one!

Players Who Like: Sushi Go, Rummy, Hot Peppers
After reading Adam’s review, if this sounds like a game for you at the time of this posting Chili Mafia is on Kickstarter through Thu, September 2 2021 9:00 AM PDT check it out and back it HERE.

Adam Collins plays many games. Too many games if you ask his wife. Not enough games if you ask his kids. Adam also designs games for his publishing company Bearded Board Games. He also runs a podcast, Eat Lunch and Board Game, where he reviews games on their merits include their ability to be played over a lunch hour. He also interviews other people involved in various facets of the board gaming community: designers, podcasters, authors, cross stitch designers. He grew up playing games, revived the passion ten years ago, and hasn’t turned back.
See Adam’s reviews HERE.
Check out Chili Mafia and Lemery Games on:
BGG,   WEBSITE, KICKSTARTER,  FACEBOOK  & INSTAGRAM