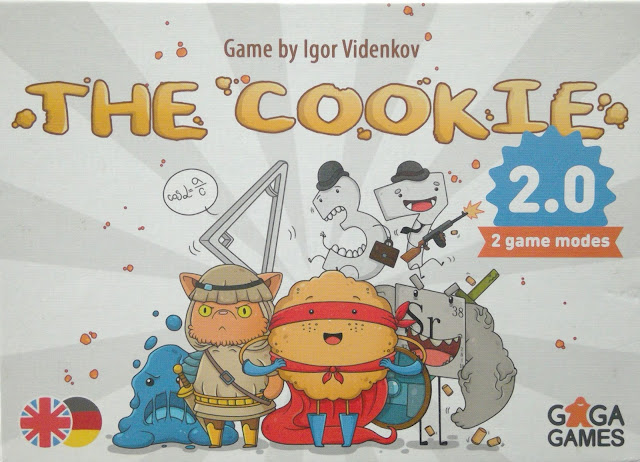 This is a review of The Cookie 2.0 which is a second version of The Cookie which was previously reviewed by Dane of the EBGN here.  This review is condensed as the components, game play, artwork and theme are identical to the original game.

The Cookie 2.0 adds a new game variant that can be played with 2-4 players (with the original playing at 4-6 players). In this game version, you only use the six characters cards from each color and the set of target cards. The rules for the 4 player game will be described below while there are slight modifications for 2 or 3 players.

Players start with the six characters of their color. The six target cards are dealt, one to each player, then one target card is played as the exclusion card and is placed in the center of the table face down, and the final target card is placed under the six player reference card. This final card is the main target for all the players.

On a turn a player will use one of their characters to declare who they are and place it face up on their face down target card (which is their character for the round). This announcement may be the truth or may be a bluff.

Next, in turn order each player gets one chance to either view the exclusion card in the middle of the table or call out another player’s character. If they choose to call out another player for bluffing, the accused player reveals their true identity. If it was a bluff, the accusing player receives a gold coin from the bluffing player. If not, nothing happens, but the accused player’s card remains face up and everyone at the table knows that player’s true identity.

After one time around the table, each player knows for sure: their own identity; the identity of any accused players; and maybe the exclusion card if they chose to view it. They also have the opportunity to believe (or not) the announced identities of other players who were not exposed.  At this point each player chooses any character from their six characters and places it face down on the table, this is the card they are choosing to target. All players then show their card at the same time. Player’s cards that have been targeted are immediately removed from play.

Any surviving player can score gold in the following manner. If the a player eliminates the main target, they get three gold. If a player eliminates another player, they get one gold. There is a two gold bonus for being the only survivor, and every player gets a single gold no matter what.

You can play as many rounds as you agree to and count up the gold at the end to determine the winner.

Rules and Setup:
The rules are fairly simple, especially if you have played the other version of the game already. There are also play examples which are really helpful.

Setup is also fairly easy and with having to reset round after round, it makes it easier as you go along.

The Good:
This game is strategically strong. A good mind is important for both versions. I’m sure Mensa would have a hay day with this one if they got their hands on it.  Sometimes the strategy is better to hope other players attack the target and you attack them. The strategy can be as simple or as hard as you want to make it.

The Bad:
The one little thing that was tough in the version 2 game was that the character you wanted to use as an assassin wasn’t always in your hand ready to use on the final phase of playing a character. If you announced you were Persians, then you used Persians to attack, you had to pull it off of your actual character and everyone noticed and therefor could eliminate your Persians with their 37.

Final Thoughts:
This game is solid. The second version definitely kicks this game up a notch. My group definitely preferred the second version, but I am sure others would feel completely opposite, but guess what, you get both in one box. I’m bumping the rating for the overall game because of the options.

Players Who Like:
Dane’s recommendations hold true: “If you like The Resistance, Love Letter and Werewolf you will want to pick this one up.”