“The Cookie is a quick card game that will make you use your detective skills or just take risks. You will be secretly playing as one of the six extraordinary characters, trying to figure out who your target is and staying unexposed at the same time (because one of the players is after you! Pam-pam-paaaaaaam).

Each player will have a target character who they’ll need to attack and another character, who’ll try to attack them. This is defined by the special reminder card.
As the game proceeds, each participant will be playing character cards from their hand, giving opponents hints that help them to figure out who their character is. When the player makes up his mind, he can play a special Sword card to attack his target (the player who represents the character he hunts) or a special Shield card to protect himself from someone, who, as he thinks, might attack him. At the end of the round players score victory points for attacking or defending from the right character.” 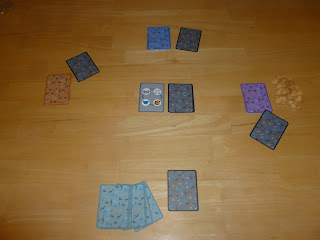 Set up for The Cookie is very simple. Each player takes one set of cards in the color of their choice and places them face down in front of them. Players then shuffle the role cards dealing one to each player. When playing with fewer than six players some of the role cards and cards from the player’s decks are removed. Lastly place the reference card and victory point tokens in the center of play and give a player the starting player token.

Play consist of a number of rounds equal to the number of players and each round has a number of turns also equal to the number of players.For example a 4 player game has four rounds with four turns each. A round begins with each player receiving a role card from the role deck—which was done in the set up phase above for the first round. Players then remove the matching role from their hand and place it face down on the table. This is their role for the round. Each role has a hierarchy similar to rock paper scissors. For example the Cookie beats the Blue who beats the Strontium who beats the 37 who beats the Persians (cats) who beats the Cosine who finally beats the Cookie. The point of the game—as stated in the description above—is to figure out which player has the role that your role beats and which player has the role that beats your role. 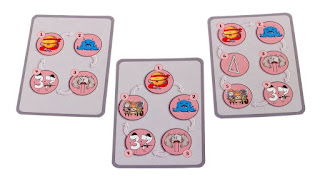 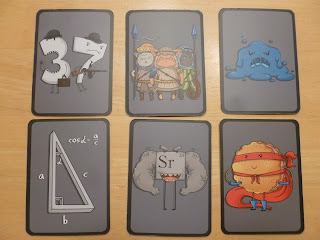 On a player’s turn she will play a card from her hand on to the table in front of her or in front of another player. Her choice of card to play is from other role cards, the hill card, the sword card, and the shield card. By playing a role card in front of her she is letting the other players know what role she isn’t. By playing a hill card she is not revealing any information—kind of like a free pass. She can play a sword in front the opponent who she thinks has the role that her role beats and finally she can play her shield card in front of the player who she thinks has the role that beats her role. 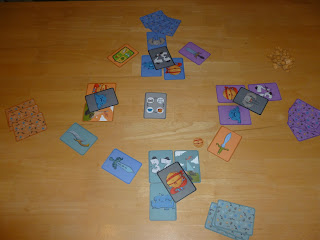 The round has now ended the first player token is passed to the next player and a new round begins. This continues until every player has been the starting player once, then players add up all their victory points to see who the winner is.

Another small game from GaGa Games that pack a good punch!

Theme:
There doesn’t need to be a theme on this game however the whimsy of the Cookie and the accompanying characters makes for a fun one. There is also a great write up on why each role beats another for those looking to know the background and for a good read.

Mechanics:
This is a role deduction game through and through and it works wonderfully. I didn’t get a chance to play it with five or six players but it worked well with four players. The use of cards as either clues, attacks or defense was wonderful.

The components are solid, however I have the same issue with the cards that I had for the cards in Stick to Colours—they are thick but soft and they stick together making them hard to shuffle. the scoring tokens and first player token are thick and easy to identify! The artwork as said above is whimsical and well done.

The Good:
The game play is solid and the artwork is wonderful. Plays great with four players and I am assuming it will with five and six players. It is easy to pick up and younger players can play it as well.

The Bad:
The components are a slight issue but not a deal breaker.

Overall:
If you like the Resistance, Love Letter and Werewolf you will want to pick this one up. I am giving The Cookie 4 out of 5 super meeples!