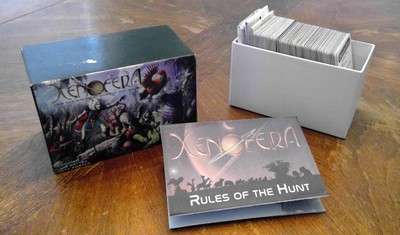 WARNING: This is a preview of Xenofera. All components and rules are prototype and subject to change.

You have been recruited by a member of the Royal Society of Xenofera Huntsmen to help them win the once a decade Galactic Hunt. Xenofera are alien creatures (animals) that are scattered throughout the galaxy. The Huntsmen are searching for the most appealing creatures as well as special collections that are more appealing as a group.

The Huntsmen are provided ships, but they must recruit their own crews, outfit their cargo bays with appropriate cages and finally capture creatures. It would be a lot easier if the other Huntsmen weren’t out to steal, sabotage and generally meddle with the various aspects of your team and collections.

To set up Xenofera, Each person selects a single Huntsman from 2 random Huntsmen cards, selects a collection from two collections cards and takes 6 cards from the “Draw” deck to create a players hand. Also, five creatures are placed face up next to the Creature deck.

The last player to capture a creature goes first. Each turn starts with an Action phase where players can make two actions such as add crew members or any number of other action cards from their hand that potentially steal crew members, cages or creatures.

Next is a build phase where players use their Huntsman and/or Crew Members to build cages, alarms or locks in the cargo bay of their ship (again, only cards from the player’s hand).

The third phase of a player’s turn is the Capture phase where players capture the Xenofera and put them into cages in their cargo bay that are big enough to hold them.

The final phase is the discard and draw phase where players can renew and/or replenish their player’s hand back up to the 6 cards you start with. Players also have the option to replace this phase by drawing 2 collection cards and discarding one. Play then continues around the table with each player taking the Action, Build, Capture and Draw phases.

There are several cases where players are required to battle for their cargo. This happens when an alarm is set off or certain reaction cards are played. Each player has a set of battle cards (each set is identical). In a battle, each player plays two of their cards and whichever player’s cards have the highest sum gets to keep the disputed cargo. The battle cards are then lost until they have exhausted all of their cards at which time they are replenished. This means you need to save your higher value battle cards for your most important battles.

The end of the game is triggered when a certain number of filled cages occurs (based on the number of players), or the draw deck is exhausted. Points are tallied from the hexes and the player with the most points wins.

Rules and Setup:
The rules are solid and although we were left with some questions by using good judgement we were able to work through them. Xenofera was quick to pick up on after only a couple of rounds. The setup is pretty quick and easy allowing players to get right into the action.

Theme and Mechanics:
The mutant creatures theme is very cool. Some of the Xenofera are predictable, like the jackalope, and some set your mind to wandering, but the story and theme are neat. The theme is not essential to the mechanics.

The mechanics are simple enough. There are player cards which help you follow along. There are plenty of things going on, but never too many that you forget them. I like that the collections are easy to remember, so you can play the game without having to refer back to them.

Game Play:
The time frame is fairly accurate. One of the sources says that it is 15 minutes per player. My group was probably closer to 60 minutes for three players, but it did not feel like a long game

There was no age recommendation that I could find. I would say it is likely 10+ just from the various aspects occurring at any given time and the complexity in the phasing of turns.

Artwork and Components:
The art is the best part of this game. You spend more time stopping to look at the animals than you do playing the game. I loved the creativity in the creatures and in the characters. Jeff Porter gets an A+ for the imagery and Liz Gattra (and likely others) for their imagination.

The components (cards) are of good stock and are again wonderful to look at. The copy I received is a prototype and will likely not be the same as the final product.

The Good:
The art and creativity carried this game from average to good.

The Bad:
Would be afraid that after the art wears off the replay-ability might take a hit. We also found that our first game was very competitive, the next two were total blow outs. I don’t have enough data to say how often that happens, but when one player is already known to be the winner 15 minutes into a 60 minute game, it becomes hard to finish.

Final Thoughts:
The game is good. It is complex enough to keep you on your toes, but not so complex that you forget what’s going on. I like that it is small, can be whipped out and started quickly and still gives you some challenge.

Players Who Like:
I would call this a tableau style resource game. It’s a little more complicated (but similar) to Harbour (TMG) or San Juan with some stealing and plundering.

I am giving Xenofera 7 out of 10 super meeples.