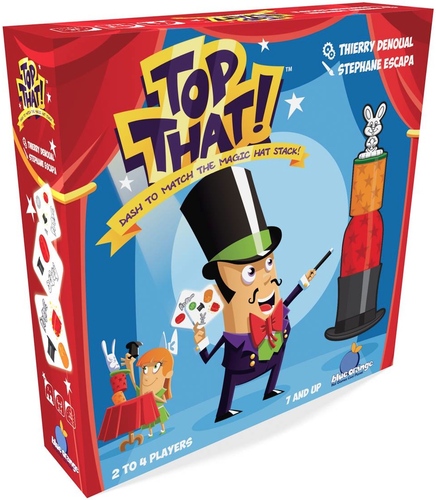 Abracadabra watch me pull this rabbit out of my hat…Poof! Wait a minute, I know that rabbit is in here somewhere. 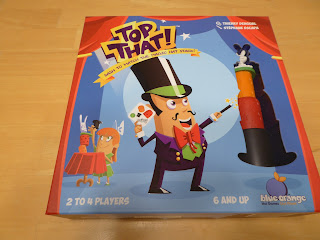 In Top That players are racing to stack their magical items in a single pile based on what the newly flipped over challenge card shows. The player to do this the fastest wins the card and the player with the most cards at the end of the game wins and becomes the Grand Master Magician or something like that.

Each players begins the game with a top hat, coin, rabbit, red cup, and orange tube. The challenge cards are placed in the center of play and players are now ready to begin.

To begin players turn over the top most challenge card revealing what items are to be used in the trick/stacking. Items showing must either be visible once stacked or invisible. Items not showing must be put aside for the current round.

The player who can do this the fastest yells out “Top That!” and checks her stack against the challenge card. If it is correct and agreed upon by all the players she takes the card.

Play continues in this manner until all the challenge cards (or a predetermined number of cards) have been taken. Once this happens it triggers the end of the game and the player with the most challenge cards wins!!!

There is an advanced variant where items with stars around them cannot have hidden objects inside of them. This makes for a bit of a more challenging game since you won’t always be able to hide stuff under the hat.

Rules and Setup:
Being a kids game, Top That is very quick to set up—as you can see above—and easy to learn. The rules are super straight forward and short making it simple to get started.

My kids were able to pick up the game quickly as well and were able to play on their own soon after learning. The 6+ age recommendation is spot on, however older players that have better dexterity will have a slight advantage. To deal with this we give the younger kids a bit of a head start.

Theme and Mechanics:
I love the theme of Top That as I have always been fascinated with magic, and although you really aren’t doing magic during the game it is still fun theme that works well with the mechanics.

This is a speed/dexterity game that will test a player’s ability to quickly look at a challenge card and complete it which is a lot like Dr. Eureka (see review HERE). The big difference beside the theme is the dexterity required is much lower in Top That.

Game Play:
Top that can easily be played in under 20 minutes (15 minutes is what the box says) even using all the challenge cards.

The game is tight and really plays smoothly especially with younger kids. It also plays well as a two, three, and four player game. I imagine you could even test your skills with some time trials in a single player game.

Artwork and Components:
The components are so great in this one. When I first got this package my kids were bouncing off the walls waiting for me to open it. The quality is top notch which I have come to expect from Blue Orange Games.

Although the artwork is minimal in Top That, what is there is great. My only gripe here would be on some of the challenge cards the difference between visible and non-visible items can be hard to distinguish for younger players—specifically the rabbit (grey vs white).

The Good:
I love games that I can play with the whole family and Top That nails that. The fact you can set up and teach the game quickly is a huge plus as I often find myself loosing the kids if I take to long in this department. Also the fact the kids can take the game off the shelf and play it themselves is awesome.

Speed and dexterity games are great learning tools for younger kids which is always an important factor for me. Have I ever mentioned that I love how board games can help with early childhood development. 🙂

The Bad:
The only thing as I mentioned above would be trying to distinguish between hidden and non-hidden objects.

Final Thoughts:
Don’t be fooled by the kids game appearance, adults will like this one too which makes it great for the whole family. Top That has already been played multiple times and has found it’s way on the my shelf even though the review was not complete. I guess it has now found it’s new home.

I am giving Top That 8 out of 10 super kid meeples.
Check out Top That on:
BoardGameGeek.com
Purchase Top That on:
Amazon.com