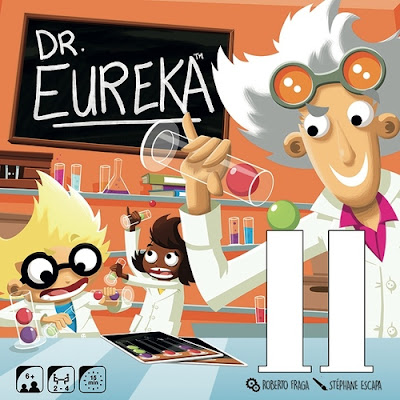 A few weeks ago I was excited when I was contacted by Blue Orange Games to do a review on one of their games. Shortly after I received Fast Flip and was under the impression that it was the only game I would be reviewing. To my surprise a week after that I got another package in the mail from Blue Orange Games, this time it was Dr. Eureka!

Have you ever wanted to put on a white lab coat, grab some test tubes and start mixing chemicals to see what you could make or even better blow up? Hmm, maybe it is just me. Either way Dr. Eureka is a fun game of experimenting for the whole family.

In Dr. Eureka players are trying to manipulate materials (little plastic colored balls) using test tubes to get them in the correct sequence that matches the current challenge card. The player who can do this the fastest wins the card. Win five cards and you win the game! 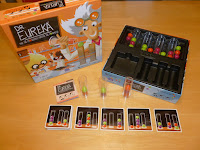 To set up Dr. Eureka shuffle the challenge cards and place them face down in the center of play. Place three test tubes in front of each player in a line. The take two balls of each color (per player) and place them into the the test tubes as follows: 2 purple in the first tube, 2 red in the second, and 2 green in the final tube.

When players are ready the first challenge card is turned face up. At the same time all players race to complete the challenge by transferring their balls from one tube to another trying to match the sequence of balls and tubes as shown on the challenge card. Players must follow three rules when doing this:

The first player who has the correct sequence shouts “Eureka!” If all players agree that it is correct that player collects that challenge card which is worth 1 point.
Play resumes by turning over the next challenge card. Please note that players do not “reset” their test tubes, they simply continue from where they left off from the previous challenge. The only change is that test tubes must be turned back upright.
This continues until one player has won five challenge cards and is declared the winner!!!
There are three variations including Expert Mode which requires players to complete the tasks keeping all three test tubes in their hands until the challenge is complete. The next variation is Puzzle Mode where after the challenge card is revealed players will call out how many moves they think they it will take to complete the sequence. The player who called out the lowest number gets to try first. If she creates the correct sequence in as many (or fewer) moves than she called she gets the card. If not the player with the next lowest numbers gets to try and so forth. The final variation is Solo Mode where you try and solve the challenge cards in as few of moves as possible.
That is Dr. Eureka in a nut shell, now let’s see what we thought of it. When I say “we” I am including my three boys who are 9, 7, and 4.

Theme:
We love the theme of Dr. Eureka—apprentice scientists working to create chemical mixtures. Who wouldn’t love that? Okay don’t answer, I understand it might not be for everyone. But you should have seen my boy’s faces when I opened up the box! They couldn’t wait to dig in.

Mechanics:
This is a speed game with a unique puzzle mechanic that requires a medium amount of dexterity. Transferring plastic balls back and forth between test tubes can be very challenging as more times than not you are wanting only one ball to go from one test tube to another, however multiple balls come flying out. Throw in the fact you are racing others and it can become down right silly.

The theme and mechanics work so well together and really give the feel of working in a lab. You can’t say that about many games.

The artwork and components are awesome!!! When I saw the test tubes and plastic balls I was so excited to get started, I knew it was going to be fun just by looking at it. Not only are the components rock solid, the artwork really works well with the theme and is attractive to younger players.

The Good:
Everything from the game play to the artwork and components are wonderful. As a family we really enjoyed the puzzle aspect of this game. In fact my 9 year-old sat and played by himself after we had finished because he was enjoying figuring out each puzzle.

Dr. Eureka is easy to learn and fast to play and also scales well depending on the number of players. I even imagine you could buy two sets and scale up to 8 players nicely.

The Bad:
The one struggle we had with Dr. Eureka was it took the younger boys a little more time to get the sequences. The dexterity difference between ages really becomes apparent. The Puzzle Mode variant can help wit this. We also tweak the rules to help them out by giving them a head start or handicapping the older players.

Final Thoughts:
We love Dr. Eureka and it will definitely go into our collection. It is a fun game to play when time is short or we are wanting something a bit lighter. I am sure more serious gamers might dismiss this game because of the artwork and theme, however I think many players could enjoy this one.

Players Who Like:
Speed, puzzle, and dexterity games will love Dr. Eureka!

I am giving Dr. Eureka 5 out of 5 super kid meeples.

Get your copy on Amazon today!