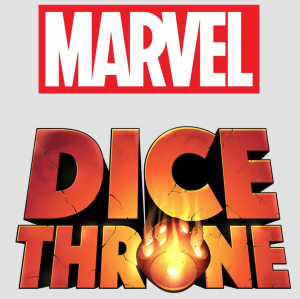 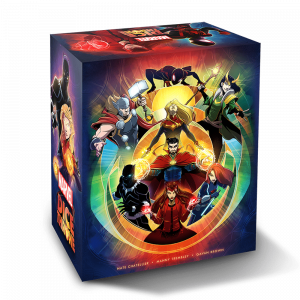 In Marvel Dice Throne , you become one of eight of Marvel’s most famous heroes, including Black Panther, Captain Marvel, Black Widow, Scarlet Witch, Loki, Thor, Doctor Strange, and Miles Morales Spider-man! Every Marvel Dice Throne hero was painstakingly designed and balanced to provide the most thematic experience possible, allowing you to truly embody your favorite heroes like no other game. Featuring all-new mechanisms and asymmetrical designs, these are our most innovative and exciting heroes yet.

Attack your opponents and activate abilities by rolling your hero’s unique set of five dice. Accumulate combat points and spend them on cards that have a large range of effects, such as granting permanent hero upgrades, applying status effects, and manipulating dice directly (yours, your teammate’s, or even your opponent’s).

All 8 heroes are compatible with the entire Dice Throne ecosystem
Use upgrade cards to improve your hero abilities as the game progresses
Play action cards strategically to manipulate dice and surprise your foe
Features a deluxe, highly functional, Battle Chest storage system
Each hero in the Battle Chest has their own beautiful set of custom swirl dice

Disclaimer: The publisher provided the copy of Marvel Dice Throne. The opinions expressed in the review are completely my own.

Should a fan boy write a review for a game? Hear me out!

If you have played as many games to a point of losing count as I have ( and I know a ton of you reading this have ) then you know what it takes for any creation to hit all your positive trigger points in a game. Dice Throne is one of those games.

My review of this newly produced title under the hottest IP in the US today MARVEL, will focus on the content and characters vs the overall “How-to-Play” or general game mechanics review.  You can find the nuts and bolts (or in this case the tokens and dice) of that HERE from my earlier review of the original game.

The focus on the new themed version is why this game needs another point of highlight.  I spoke to Manny Trembley, the games lead artist, during an earlier EBG interview:

We discussed what makes a game truly valuable when licensing and developing versions with different popular IP. ( 10 minutes 35 seconds into the conversation )

Dice Throne, unlike many created games, lends itself to be more than a simple reskinned version of itself.  Where some games simply add familiar art OVER an existing game and game mechanics, this game is malleable and able to redesign numerous elements within the original game to give a unique feel to each character created. 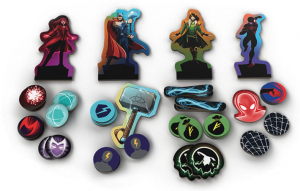 This undoubtably, in this humble reviewers opinion, enhances the playing experience and engulfs you into the lore and value that a brand like MARVEL brings to every kid and kid-at-heart when playing.  This can be expanded beyond to any brand, Star Wars, Nintendo, Halo, along with anime such as Naruto or HunterXHunter. How?

The game is character focused. It’s designed to highlight and gamify traits of that individual hero. All currently humanoid in structure. (I just wanted to use the word humanoid in a review:) The OGs of the initial production were created without names and without specific utilities to a past known hero in any lore. This by design, according to the artist, gave the original mechanics the ability to be modified or changed based on the unique traits of a chosen figure which has come to full fruition with the licensing of arguably today’s most iconic fantasy favorites. Figures like Thor, Loki, Scarlet Witch, and Spider-man. Yep and expansions like Doctor Strange, Black Panther, Captain Marvel and Black Widow all are illustrated under the direction of game designers Gavin Brown, Nate Chatellier and Manny Trembly.  By modifying the actions each can perform within the game that are represented by numerous mechanics including exclusive tokens with art and design matching the new hero’s play-style and actions exclusive to that hero. They come to life on your gaming table! These mechanics that contribute to this unique change in character theme includes unique and specific dice symbols, card titles and manipulation, and individualized character boards focused on the strengths and weaknesses of any developed character hero.  The creativity and opportunity to expand the multi-verse even with different versions of these same characters is absolutely possible. 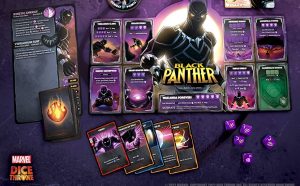 Yes, the game is known for its Yahtzee-like play on steroids and is often a product of the luck of the die rolls and cards that turn up in your hand from the deck of over 30 to 35 cards per character.  This is also something of note.  Within the community of players, each character whether the OGs or the new Marvel hero’s all get the same response.  You will undoubtably find a comment string a mile long of why the character being played is unbalanced and weak or conversely why they feel it is OP based on their experience of play.  This tug-of-war within the community supports just how balanced the core characters and now the new marvel heroes are.  Now they might not all be your style of play.  I know sprouting spores isn’t my thing with Treant nor do I prefer the simplicity of the Black Panther in his limited but powerful token actions and dice rolls.  I lean towards the consistency of Chi with the Monk and the luck of the draw (literally) with Loki to guide my path and seal my fate.  The best part is that there is something for most all styles of play and personality traits that drive your love for gaming.  Yes, there are some min/maxing strategies for each that, pending your opponent, will always be found.  The true designer greats eventually spend more time removing those found from tournament play to neutralize those “advantages” of strategy. But stated before, given the amount of die rolling and card pulling luck in this baby, you can let your guard down a little even playing those with the genius IQs.

This review can not go without praise when discussing the artwork from cover to character.  DT continues to rival that of any game creation on the shelves today or in years past.  You get the feel that you are controlling the heroes in Marvel Dice Thrones that once was simply just a readable shout in a comic or siting uncomfortably in a gum stuck seat at the cinema to get the emersion to ignite one’s imagination.   The style also certainly has influence from today’s great anime creators with a bold color palette that turns most heads when passing by a table donned with two, or three, or even four of the Marvel DT Characters sprawled out with dice and tokens littered throughout.

You can easily introduce this game to new players in the community following the complexity scale that comes with most characters, ranking them one to six in difficulty to play.  Now with the addition of MARVEL as the themed play, you may find yourself in a time warp, a full day or two has passed since you got up from the gaming table as this just keeps delivering playability at every session.  It’s like a BLIP in my weekends where the wife says, “Where have you been, where did you go?” M’lady, I have been here all along but the minutes turned to hours that turned to days away from the realities of life.   That is why I will continue to fan the flames for more IP expansions and support the community of players into the future.  I will do so for this game title in this universe and any I travel to next in the Multiverse! A BOGUE 2? Has a nice ring to it…… says no-one! Keep rollin’ Sixes!
After reading Bogue’s review, if this sounds like a game for you at the time of this posting Marvel Dice Throne is available for purchase. Check it out and get it HERE.
Find out more at BGG. (insert link)
Did you back it based on our review? Please comment below letting us know!