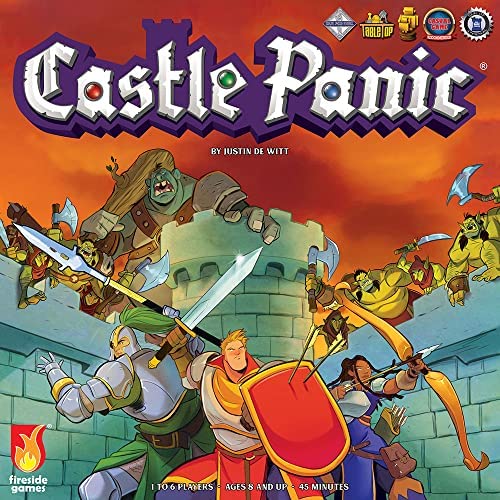 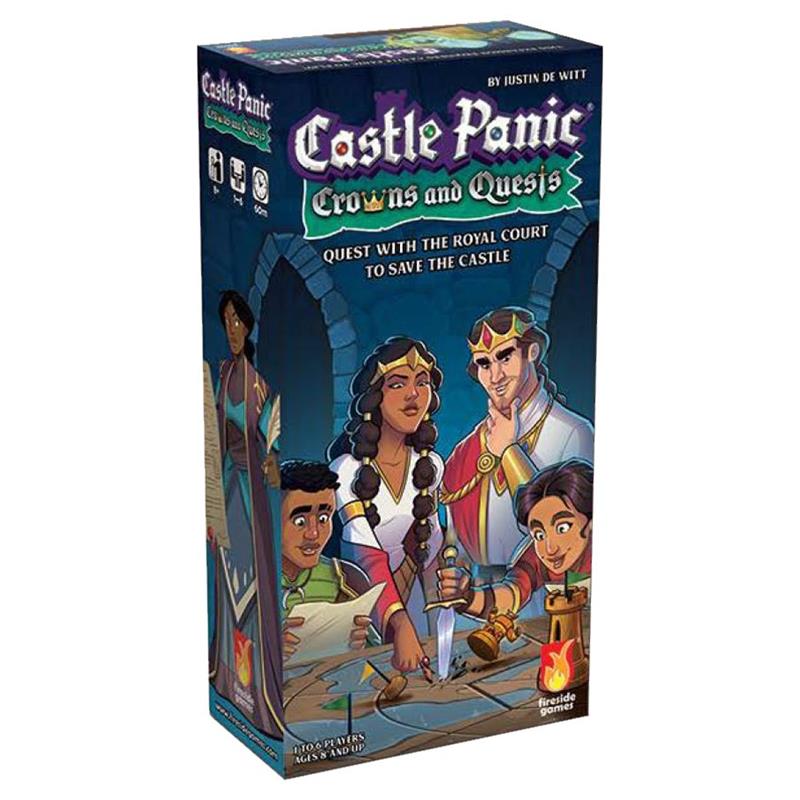 Castle Panic: Crowns and Quests adds new characters and quests to the world of Castle Panic.

Players can choose from a variety of playable characters, each with their own game-changing power that can be used on that player’s turn. Players use these powers to attempt a series of quests that must be completed before the castle is destroyed. Quests can include retrieving magical items from spaces on the board, destroying a cursed temple, or teleporting the entire castle to safety, among other challenges — all while fighting off the monster army.

In more detail…
Crowns and Quests, the newest expansion to Castle Panic, adds 12 playable characters with unique abilities that allow players to join the royal court to defend the Castle. Each character is assigned to 1 of the 6 towers at the start of the game. If that tower is destroyed, the character is lost, and the player must continue without that ability.

Players will need those abilities too, since there are now quests that the players must try to survive to win the game. At the start of the game, players choose 1 Standard Quest and 1 Endgame Quest. Until both of those Quests are completed, the pile of Monsters will refill over and over.

Standard Quests include searching for magic scrolls, looking for a cure for a plague of madness, holding off magical stones that cause the Monsters to spawn closer and closer to the Castle, and much more. Once the Standard Quest is achieved, players move on to the Endgame Quest, which they either complete or perish trying. Endgame Quests feature challenges such as collapsing caves to stop the flow of Monsters, racing against time to destroy a cursed obelisk, and placing magical portals to teleport the entire Castle to safety. There are 11 Standard and 7 Endgame Quests to choose from, providing hours and hours of replay as players explore all the different challenges.

Disclaimer: The publisher provided the copy of Castle Panic: Crowns and Quests. The opinions expressed in the review are completely my own. 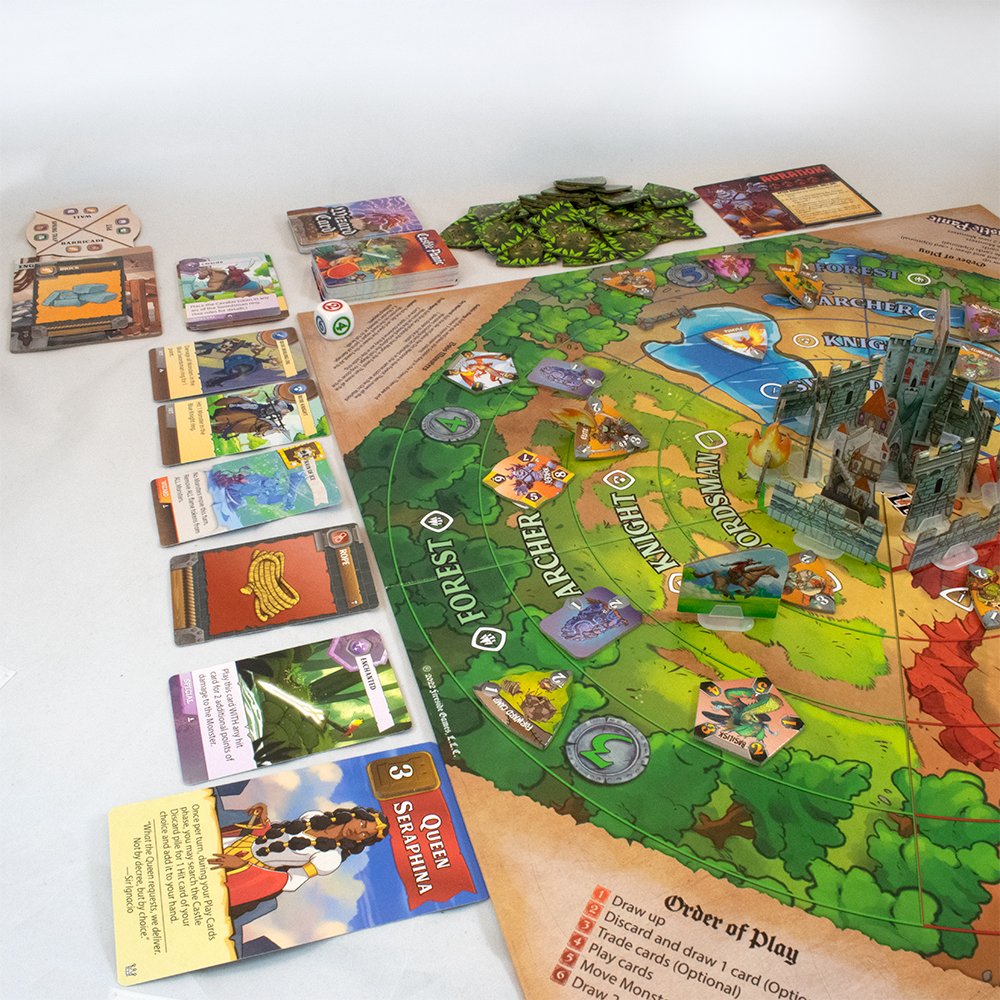 At which hour all the gates of quite quaint game playeth conv’rge on a single castle square with grace in mechanics and the championing of ye coop’rative playeth within competitive ruleth setteth, thee has’t Castle Panic.

(I thank the Shakespearian translator source: lingojam.com for the above translation) 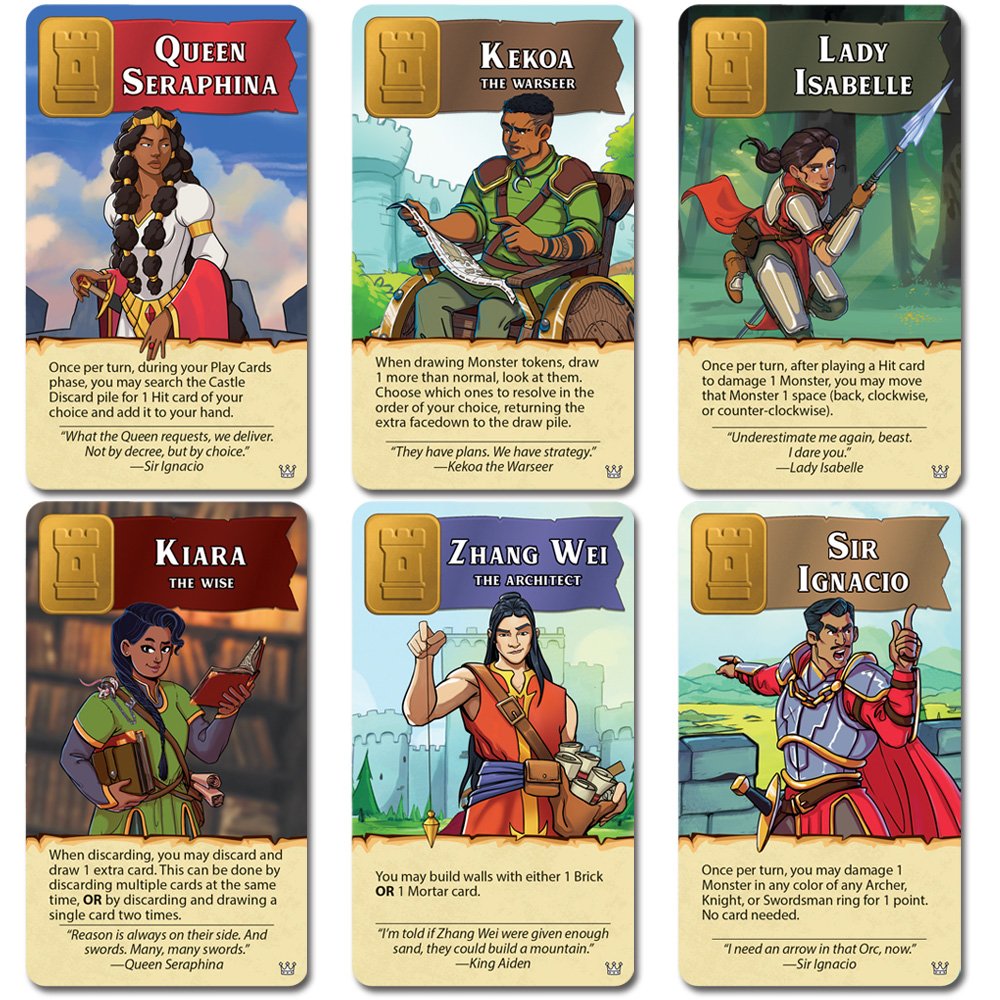 When all the gates of beautiful game play converge on a single Castle Square with grace in mechanics and the championing of cooperative play within a competitive rule set, you have Castle Panic. Whether you are a seasoned gamer or brand new to the hobby of board gaming, this one is perfect to challenge and entertain you on any given night

The base game of the revamped version of Castle Panic has not changed.  What has changed is taking a respectfully flat looking board, token, and card set and transformed it into a vivid illustration that commands action and delivers a much more aesthetically pleasing experience when playing.  This piece will not review the base game outside of saying that the new look and feel provides an even stronger reason to make this your go-to game when introducing someone new to the hobby. I do recommend that you NOT add the below expansion to that encounter just yet.  Give it a few times playing before adding Crowns and Quests expansion to the mix. 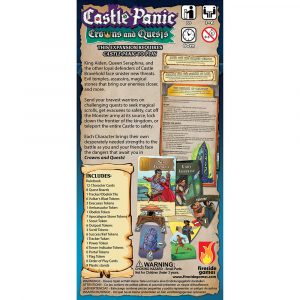 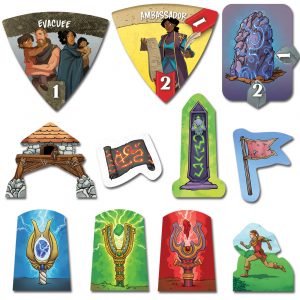 Then strap in for an even better time.  For those experienced players, you will love the paradigm shift in focus from monsters to missions with this one.

In the Crowns and Quests expansion, you are given two unique changes to game play which you can add individually to a session or collectively, depending on the amount of self inflicted brain pain you wish to place on yourself and fellow table dwellers.

After setting up the base game, you incorporate this 4th expansion by adding the 12 “Crown” character cards or defenders of the castle towers and all with their own unique abilities to strategize and execute game play with.   The Quest” portion is devised of 18 different quests that individually could be called mini-expansions in and of themselves. You select one standard quest and one end-game quest to begin the game.  Each of these customized goal-sets and required win conditions come with their own well illustrated tokens and trackers corresponding with the chosen quests. You can pick or randomly choose a character from a random shuffle and deal of 2 crown cards as well as a locator card which determines which tower that character has ensconced their righteous selves in to begin the game. Next all players can again either choose one standard and one end-game quest or randomly pick from both piles.  Each quest has its own setup requirements that immediately set the stage rivaled only by Shakespeare himself in a packed playhouse. (Aka – The Globe – look it up or click here. It is amazing!) 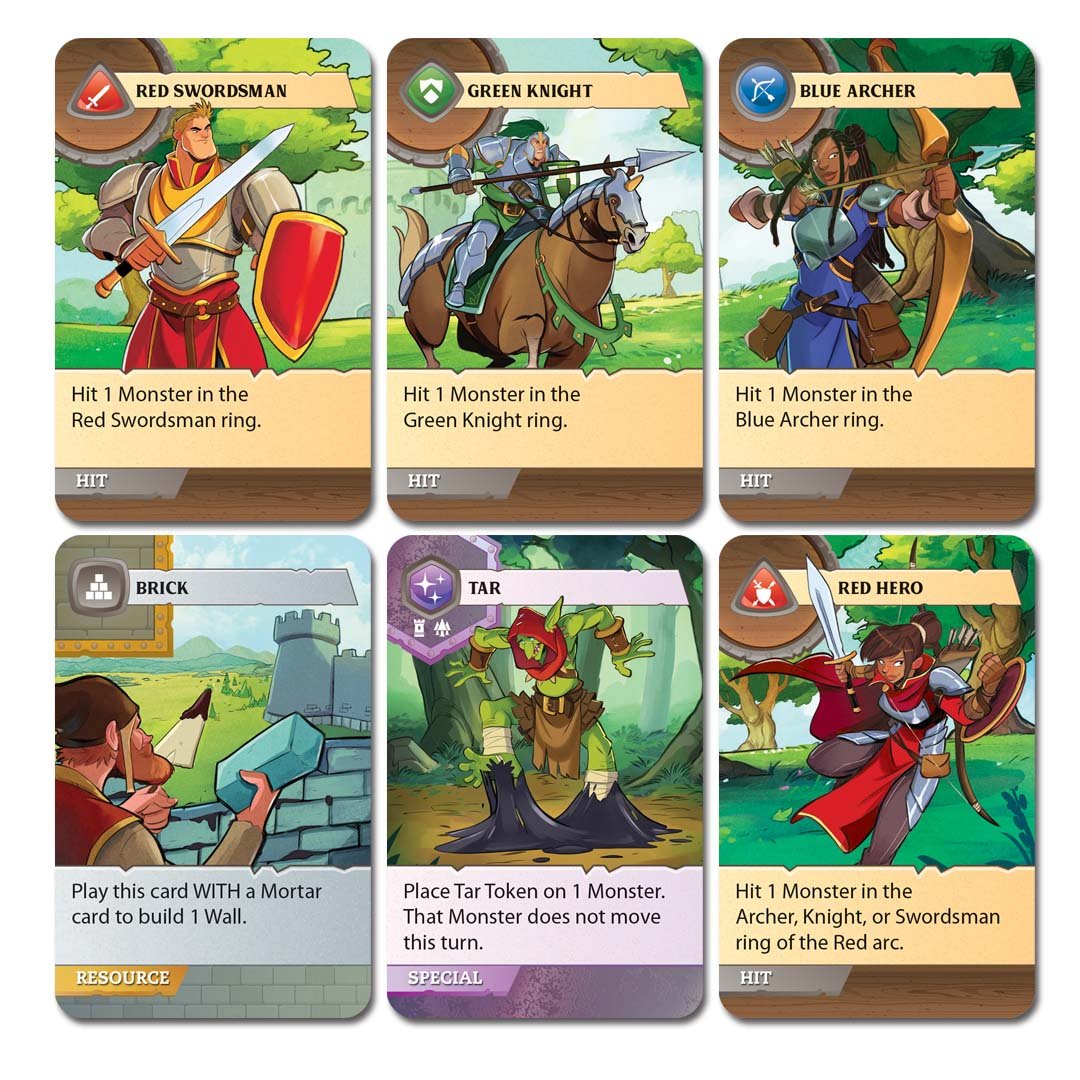 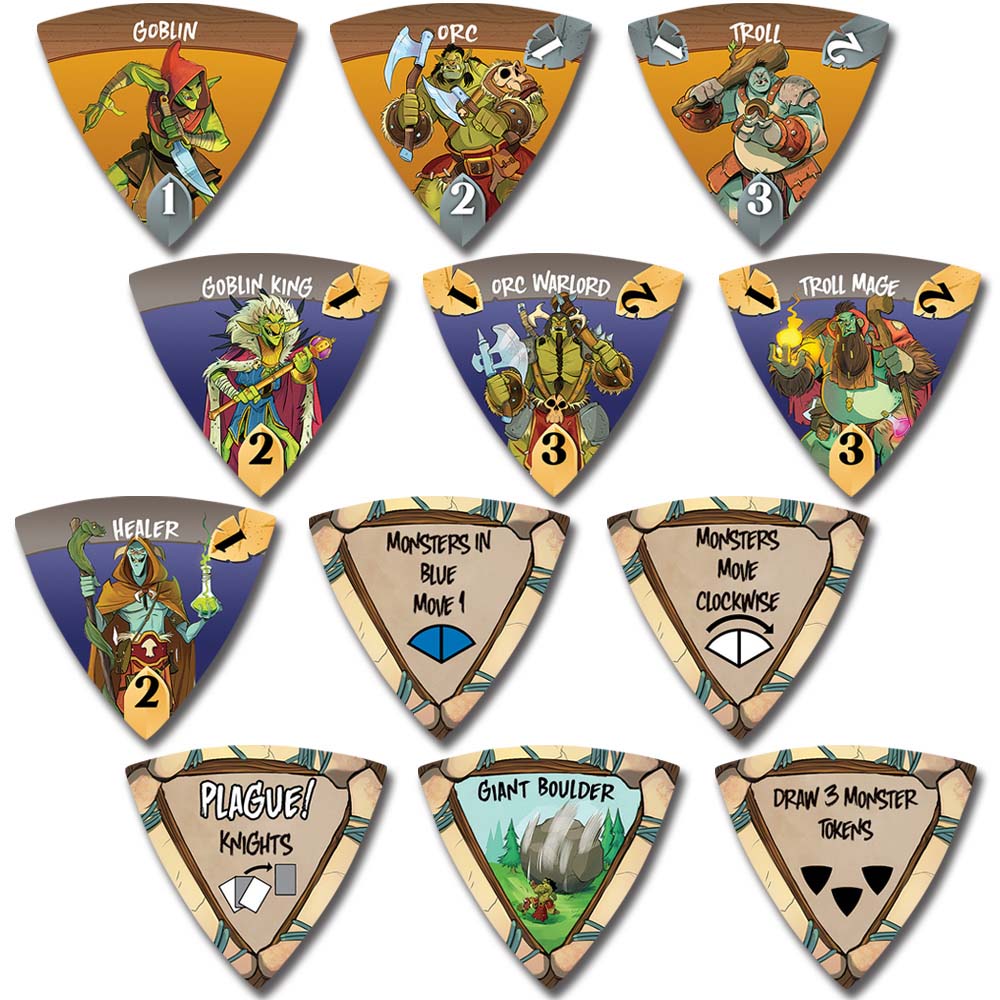 The mechanics of the game do not change with each player in turn initially drawing up to their total allowed hand size, discarding and drawing, trading, and playing cards.  Before the moving monster phase, you do a “quest upkeep” that requires you auto activate effects or move tokens, etc. If you complete this quest you would then move to the end quest required activations and activities to meet the winning conditions. All monster movements and the drawing of TWO monsters each turn unless other cards or tokens dictate continue.

The gameplay again remains the same with the addition of these elements of the crown characters involvement, providing abilities in their designated quadrants or as the quest allows that match up to their initial card locations drawn at the beginning of the game. The ONE MAJOR EXCEPTION is that you no longer have the luxury of outlasting the bag of monsters that invade your space and attack your castle like the zombie scene from World War Z – “THEY JUST KEEP COMING!”.  With this new expansion you place all defeated monsters and actions back into the bag and continue drawing once the first wave is exhausted.  Only by completing both standard quest and end-game quest can you win. Oh, the agony but oh the sweet feeling of achievement when we finished the end task required of us, reclaiming our dignity, FREE of the Vile that plagued our lands!

To say the new illustrated look of this industry great is solid, is an understatement.  Rebirth is more of the word I would use to highlight the detailed changes made for today’s overstimulated society.  They added the right amount of vivid color and graphical style that enhanced already familiar card art and monster action poses. The new features complement this redesign perfectly and make for a seamless collection if you are new to the purchase of both the base game and one of the FOUR expansions.

I have to admit, adding the new expansions to a tattered and worn (in my case) base game from the late 2000s is not the best play experience. Doing so, not only would make me feel old but reminds me of my date for the prom I had where everyone whispered…”why is she with THAT guy!”. You must pick up the new 2nd edition base game first and then add the expansions. The beauty of this new wave and board design is simply well above the fray of the old in experiential play.  I did find some of the quests to be more enjoyable than others but that is simply personal choice and each player like tushes, will have an opinion of their own. So play them ALL and enjoy the hours of fun you will get from not only updating your current game but adding the Crowns and Quests Expansion to your library.  No jesters like myself required, though Jesters do often prove prophets!

After reading Bogue’s review, if this sounds like a game for you at the time of this posting Castle Panic Second Edition, with its bright new art, is on store shelves now

and
You can also pick up the newest expansion, Crowns and Quests. It adds 12 playable characters with unique abilities and 18 quests with different win conditions.