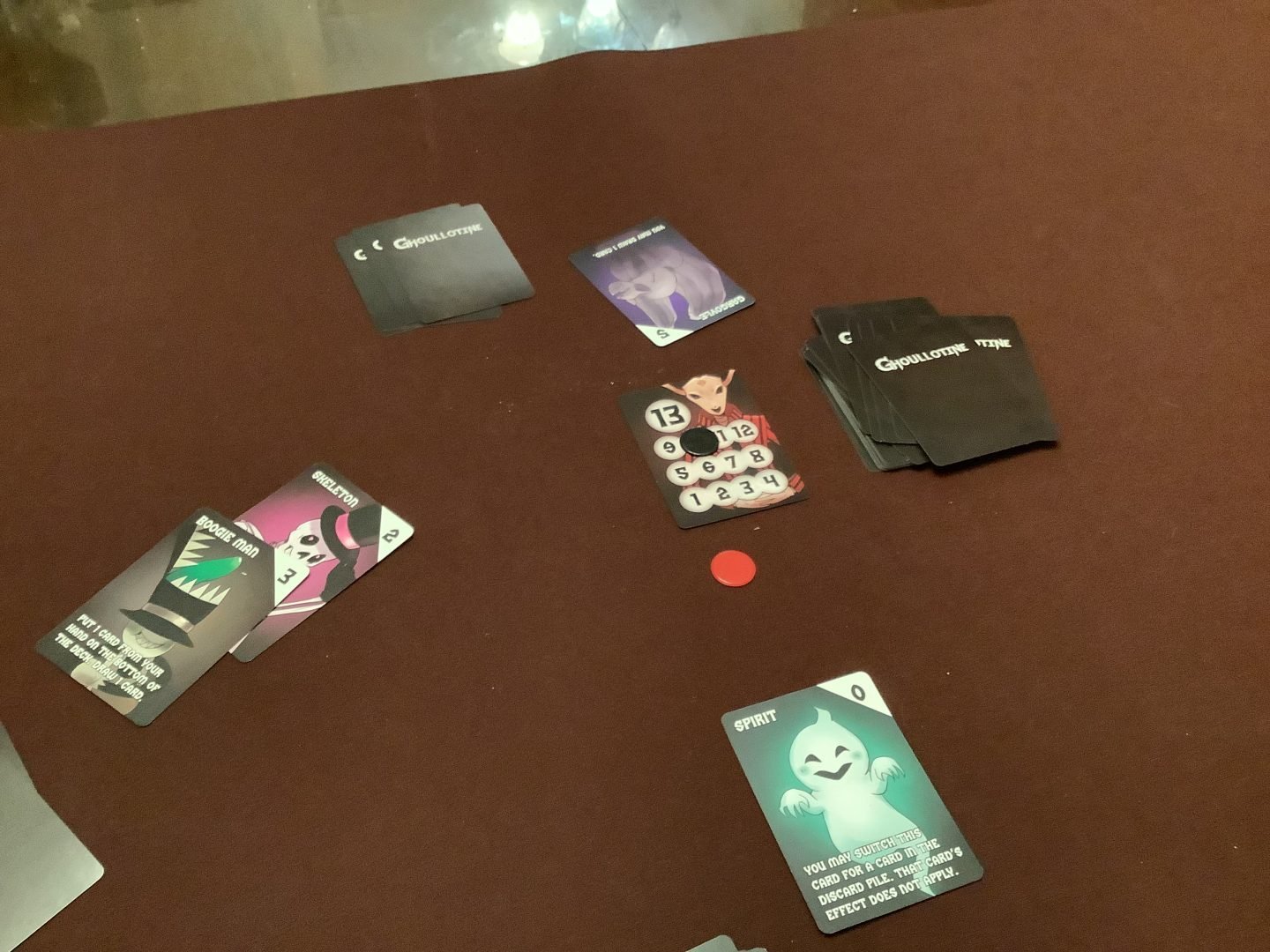 Ghoullotine is a fast and ghoulish card game with some themes inspired by the likes of Blackjack.

Each player has a hand of 3 cards that they must use to the best of their ability. During a player’s turn, they will play 1 card from their hand, it’s number is added to the total. Then, if the total is above “13”, then that player is removed from the game. If the total isn’t higher than “13”, then the effect of the card activates. Such effects may be the “Witch’s” ability to swap hands with another player or the “Ghoul’s” ability to skip a player’s next turn.

This game has a surprising amount of tricks and tactics to employ, that’ll keep you addicted to this treat of a game.

Disclaimer: The publisher provided the copy of Ghoullotine. The opinions expressed in the review are completely my own. 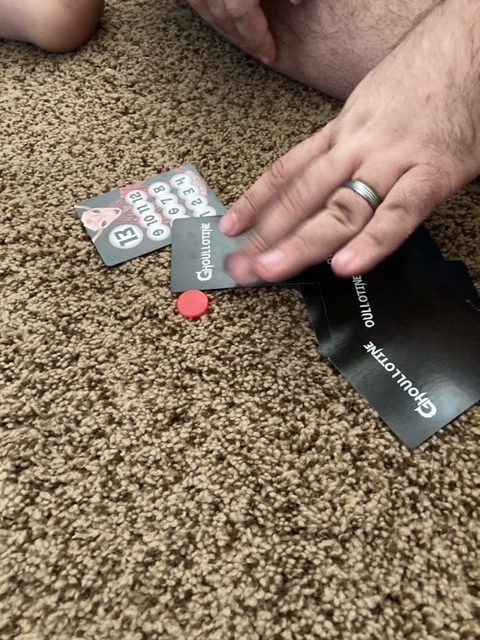 Another happy accident! I assumed Ghoullotine was a re-theme of the game Guillotine, which I adore. Not only was it not, it had nothing to do with that game in the least.  So, with a little trepidation, I opened the small tuck box to learn to play Vincent Baker’s Ghoullotine!

To set up, find the scorecard that features the Wendigo and is numbered 1-13. Place it in the middle of the playing area. Locate and place the red and black chips next to the score card. Shuffle the rest of the cards and deal 3 to each player, 5 if playing with fewer than 4. Set up complete.

The rules are simple: on your turn, play a card and move the chip up or down the scorecard according to the number on the card. Then, take the action listed on the card, if any. If any player drives the points over 13, they are eliminated. If a player is eliminated, the remaining players draw back up to 3 or 5 depending on the remaining player count. Last player standing, wins.

The artwork fits the ghoulish theme very well. I think that the theme could have been anything with this game. Nothing in it requires it to be Halloween-type characters.

Mechanically, Ghoullotine is sound. The strategy in trying to force the number up to, and even to, 13, in hopes of causing your opponent to go over works well. I assume 13 was chosen for its superstitious nature. It adds a little to the theme.

On a player’s turn, that player must play one card from their hand down in front on themselves. These cards are not discarded. These cards could range in value from the -6 Wendigo to the +6 Vampire, Werewolf, or Witch. The plastic chip is adjusted to based on the value of the card. Should the score go below zero, use the red chip. For anything above zero, use the black chip.

As long as the value does not exceed thirteen, any action on the card now takes effect. Some cards do not have an action. If the player has no card to keep the score below 13, then that player is eliminated.

Each player still in the game draws cards back up to the hand limit of 3 or 5 depending on the count of players still in. Once only one player remains, they are the winner.

There is a lot of fun in trying to push someone over the top. Sometimes it can backfire. There are a few zero cards, which are fun to play. The Ghost has no action; Blob is very fun as the top discard value becomes the value of the Blob; Spirit allows the player to change it out for any card in the discard.

Abby Edwards’s art is playful given the theme. It keeps it light-hearted and family friendly. The components are all standard quality you would expect from a card game.

Ghoullotine is easily approachable by players. The fun artwork heightens that. It comes in a standard tuck box and packs easily into a purse or pocket. It can be played while waiting on food at a restaurant, as I did with it. The cards are very harsh with very little that help you. Getting the counter to 13 does not take long.

The rules for Ghoullotine need to be re-released, or an erratum posted on its Board Game Geek Page. They are not complete, and I had to email the creators to get a ruling. The creator was very responsive!

I think the two plastic chips could have been one double sided on (think Othello). You rarely go negative. Heck, you could even have not provided any and ask the players to bring two different coins. Of course, if they did that, I would advise just adding cheap chits. I guess that is a no-win.

While the box says it can play up to 10 players, I think that it would be best at 5 or fewer. A 10-player game would leave a lot of people out, waiting on the next game to start. It plays quick. It plays easy. It is family friendly. Ghoullotine would make a great addition to your collection. Its size makes it a great addition to any traveling collection. It can be purchased easily at this link.

Filler games, games that can be one round or many

After Reading Adam‘s review, if this sounds like a game for you at the time of this posting Ghoullotine is available for purchase for only $19.99. Check it out and get it HERE.
Find out more at BGG.

Check out Ghoullotine and Vindicated Entertainment on: