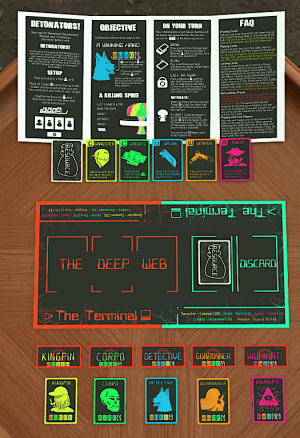 I met up with Tony and three fellow playtesters (party of 5) for a digital playthrough of DETONATORS! via Tabletop Simulator. Currently the game is live on Kickstarter and is about 60% funded at the time of writing this review and will likely be past that or funded by the time this is posted. The community for this game, from my brief interaction with it, was very active and enthusiastic. For example, I had given very poor notice – 60 minutes – that I could be available, and Tony had no problem filling a table with new testers. Though it doesn’t necessarily show the strength of the game or publisher, I felt immediately welcomed and comfortable with this group. As this game is all about creating a cheeky and roguish experience with friends, I feel it’s certainly relevant. It’s uncommon to have a lot of laughs with strangers and that’s just what happened during our back-to-back plays of the game.

Deception! Destruction! Dexcitement!
Damage your friendships like never before with Detonators!
In this poker-face game of pretending to be a role you aren’t you must carefully build your own winning hand with cards from the deck – but beware, because one of your friends has your Detonator, and if they clue in that you are their target your hopes of winning could be up in smoke!

Disclaimer: The publisher played the prototype TTS version of DETONATORS! The opinions expressed in the review are completely my own. 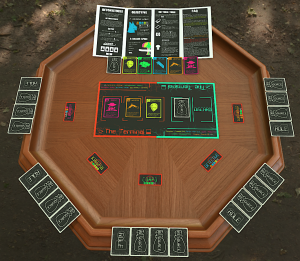 It’s important to note that I did not have any interaction with physical components of this game. I was told that the TTS components and art were an accurate depiction of what the finished product was going to be for the base game. I can’t comment as to the quality of the cards, box, etc. The overall look and art are pretty basic and did originally throw me for a loop, but the game, like many card games, is not reliant on the art at all and it’s more so to fill the card space.

I like the two main strategies to win; you can target the other players and call them out, or you can build the Tableau required to claim victory.

I noticed a self-defeating or forced loss to the game in which you can be led into a choice between two wrong moves and/or be mathematically impossible to win. It’s not uncommon in quick to play games (or other types) for an ‘it is what it is’ situation or for high luck-based conditions. As a strategy lover, I tend to lean less into luck, but I found the balance acceptable in this title. 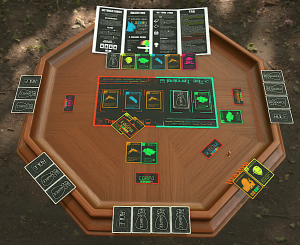 This is a very portable, easily learned, and accessible game that would be a consideration for any age or play style. Personally, I’d bring it to the table with a group of good friends who were not looking for a mentally taxing game while sharing some good times, with new gamers, or as a super quick filler while waiting for other players to arrive to game night (or a nightcap). Due to its short playtime and easy ruleset, it can be a standard go-to for 4-5 players especially in smaller game collections.

– Short playtime with a 4-5 player count

– Clever deduction component to the game

– The art wasn’t for me, but it also made zero difference to me liking the game or not

– I feel the price point was a little high.

– The availability of content online and on the Kickstarter campaign page was limited.

–  I feel advanced players would have an unfair advantage – the same for players familiar with the game – over other players. I only played twice but feel on any subsequent plays, now that I got the gameplay figured out, I’d be difficult to beat.

This game started as a self-assigned project from the designer who had completed a program for game design. He was eager to join the industry and prove he had what it takes to provide value to potential employers as someone just entering the gaming business.

As far as first titles go, this was a win. It’s quick, accessible, and more importantly, marketable. Though I believe there could have been improvements in the process I think the end product overall is worth checking out if the genre and game type are of interest to you. I know who I’d like to have around the table with me if I can get my hands on a finished product. I’ll tell you one thing; it is a lot of fun. I suggest you don’t play with anyone overly sensitive to take that or player elimination mechanics. Aside from that, unpack and enjoy. That’s all for today!

Here’s a link to their Kickstarter campaign:

After reading Brad’s review, if this sounds like a game for you at the time of this posting DETONATORS! will be live on KICKSTARTER until Thu, December 1 2022 8:54 AM PST, and has a funding goal of $3,000. Check it out and back it HERE.
Find out more at BGG.
Did you back it based on our review? Please comment below letting us know!

Check out DETONATORS! and Insight Studios on: