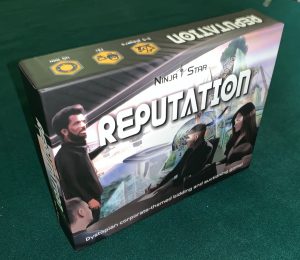 Reputation is a dystopian corporate themed bidding and auctioning game.

At the end of the game, you will get sanctioned by the anticorporate group and be eliminated from the race for victory if you have the least reputation! Among the remaining CEOs, the CEO who made the most profit claims victory, and continues to be the elite of the elite!

The core mechanics is based off of Bidders! released in Japan in 2015 from One More Game.

Disclaimer: The publisher provided the copy of Reputation. The opinions expressed in the review are completely my own.

I like games with an auction mechanic, they give you good insight into the risk tolerance of the other players. This game takes that auction mechanic in a different direction. During the auction phase of the game there are 2 project cards on which players will bid, one that is good and one that is not so good. The unique auction aspect is that the benefits of the good card are slowly transferred to the not so good card. So, a long auction can actually make the not so good card better than the good card. There is an added twist. You may not want to outbid the players to your left or right on a good card because the good cards are placed between players so both players get a benefit. This allows for alliances, coalitions, and double crosses. In the end, though, winning bids are needed to gain profit, and profit wins the game.

On the surface, some may think, “So, just another auction game?” but this isn’t really the case. I would also classify it as a bit of a social deduction game, in that you need to determine your fellow players’ risk tolerances and whether you can trust the players to your left and right. You need to balance not being eliminated at the end of the game by having the least reputation with the desire to gain profit. As a strategic auction game, Reputation is definitely worth playing. 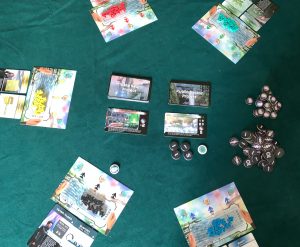 The rule book is well written and fairly easy to follow. Each phase of a game round is explained and includes examples and reference photos to clarify potential issues. The back cover of the rulebook is a quick reference aid that can be copied and given to each player for reference.

The setup is fairly straight forward and doesn’t take much time. The part of setup that may take some time is if players are allowed to choose their CEO character and Corporation, since each has an in-game ability, particularly with players who have not played the game before. Each player selects a board and the color of their workers. A deck of Private Sector Projects and a deck of Public Sector Projects are formed and placed in the middle of the table. Credits and Reputation tokens are each placed in a pile next to the play area. A start player is determined and the game begins.

In Reputation you are a CEO of a corporation in a dystopian future trying to win contracts that may either gain you profit and reputation, or gain profit and lose reputation. As a CEO you are making executive decisions on whether to bid for projects or simply let them pass. You are not alone in this, though, there are other CEOs wanting the same projects. Some are your competitors, some may end up being co-sponsors of a project, and some may be your worst enemy.

The secondary mechanic is worker management. Each project requires workers to complete, and players have a limited number of workers. Assigning more workers will help you win bids, but more workers does not equate to quicker completion of projects. Only 1 worker per project will finish their work each round and return to your HQ. Without enough available workers for a project, a player can’t win the bid on the project. 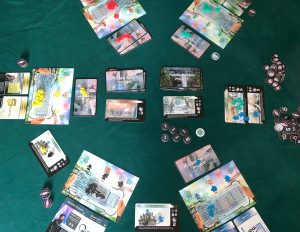 During the first phase, players return one worker from each of their projects to the Break Room.

The second phase is to reveal a new set of Public and Private Sector Project cards. The associated credits for the Public Sector Project are placed by the card.

Players may return up to 3 workers from the Break Room to their HQ in the sixth phase.

The start player token is passed for the seventh phase.

What is done well:

Creating a diminishing return on investment for extended bidding on projects makes it so no single player can gain an advantage by artificially bidding up projects. Continued bidding will make Public Sector Projects less desirable and Private Sector Projects more desirable. This creates bidding strategy opportunities that typically do not occur in most auction games.

The semi-reliance on your neighboring CEOs for reputation. Even if you didn’t win the bid on the Public Sector Project you can still gain a benefit, and in some instances letting a fellow player win the bid can be a good strategy.

What some may find issue with:

Players who have played the game before will have an advantage at picking the CEO Character and Corporation they play to combine abilities. This can be overcome by randomly assigning these for games involving new players.

Players not understanding the role Reputation and Credits play in the final scoring. It should be made clear that Reputation is needed to make it into the final scoring but does not play a role in final scoring, and that Credits are equivalent to points and are what determines the winner. Because they are not closely tied together, newer players may become confused as to which one they should be trying to get.

When I picked up this game and read through the rules I was wondering if this game would work, it was unlike the auction games I typically play. I also wasn’t sure how my game group would receive it; some like direct interactivity games while other like more asymmetric play. The game proved to have something each person could get behind and it ended up being an enjoyable experience. Players have to be involved throughout the game, with very little AP encountered. Reputation can be an ice-breaker game for new gamers, but to get the most out of the game you will want to play with friends or a good gaming group. If you enjoy games with an auction mechanic and player interaction, you will like Reputation.

Players Who Like:  Auction based games, fixed number of rounds, independent and semi-cooperative game play in the same game, risk vs reward, shorter strategy games in general

After reading Thomas Shepherd’s review, if this sounds like a game for you at the time of this posting Reputation is available for purchase NinjaStarGames.com for only $25.99. Check it out and get it HERE.
Find out more at BGG.
Did you get it based on our review? Please comment below letting us know!

Check out Reputation and Ninja Star Games on: 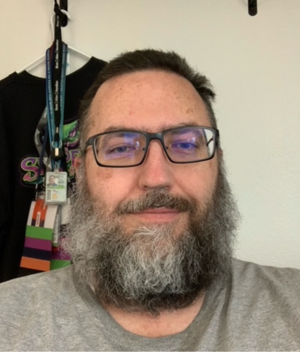