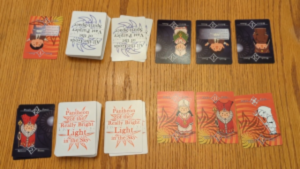 Ridiculous zealots. Derpy followers. Subversive preaching. Amass your own cultish following by out-preaching your opponent in this strategic card game for two that takes less than 30 minutes to play. Preachify! is so easy to learn that we can describe the basics in three bullet points!

You each secretly choose a card, then reveal the chosen cards at the same time.

After doing this three times, whoever has the higher preach power wins the round. The losing cards become “converted” to the winning player’s creed.

Whoever has the most believer points at the end of the game wins!

Disclaimer: The publisher provided the prototype of PREACHIFY!! The opinions expressed in the review are completely my own.

Overview:
As I have said before, and I will say again, I am a sucker for a good two-player game. Add in that this one boasts an 11-minute playing time, not 15 minutes, and I was extremely intrigued. Then, the theme of converting cultists basically had me sold. I sat down with my trusty opponent, The Son, and we played Preachify.

The set up is very simple. Each player takes a deck of cards and shuffles. Both decks are identical in makeup, but one is Pantheon of the Really Bright Light in the Sky and the other is All the Gods of the Vast Purply Spirit Space. Once shuffled, each player draws 6 from their deck, and the game is ready to begin.

The mechanics seemed to be just The Game of War. I was wrong. There was much more strategy than just flip a card. You had to read your opponent and try to get in their head.

The theme of amassing cultists amused me.

The cards have two values on them. The top value is that card/character’s preacher power. The bottom value is the believer point value of the card. During each round, each player places three cards into the middle one at a time facedown. Once the card is played, the player draws a new card from their deck to replace it. When the card is drawn, the card played may no longer be swapped out. After both players have a card facedown and replacement drawn, the facedown cards are revealed. After the third card is revealed, the player with the highest preacher power wins the round.

Upon winning, the winning player collects all six cards in the middle. Their own cards are put into a discard pile while the opponent’s cards are stacked separately in a believer pile. At the end of the game, the player who has converted the most point value of followers wins!

I worked off a prototype, but I have looked at the artwork on the Kickstarter page and the playthrough video. I love it. It carries the lighthearted theme well. The vastly different colors of the two decks makes this game easy to sort back out after play.

When I first started playing, it felt as though Preachify was just a themed deck for The Game of War. After the first set of three cards, I quickly realized it was much more. The card counting and decision making set it apart. Do I play high cards then attempt to win automatically with my Prophet-King? Do I see that you are playing high valued cards and try to convert your believers with my Prophet-King? Do you have a Skeptic left and you are throwing junk followers into my deck?

Variable difficulty kept this game fresh. You can play it as simple or complicated as you like. Add in the new rules as you get more comfortable with the game.

My only real complaint was fixed. I worked off a prototype deck and had to constantly be checking what each card did. On the final cards, each card has their information on it, making this complaint obsolete.

What can I say other than, Preachify is a very entertaining and quick game. The Son and I enjoyed it immensely. The strategy of trying to outthink your opponent never really gets old. It pits you against them, and all in the name of converting people to your cult!

After reading Adam’s review, if this sounds like a game for you at the time of this posting PREACHIFY! – A GAME OF STRATEGIC SUBVERSION was recently funded on KICKSTARTER by 45 backers who pledged $1,675 to help bring this project to life from
Jul 25 2022 – Aug 22 2022 (28 days). Check it out and get it HERE soon.Find out more at BGG. (insert link)
Did you back it based on our review? Please comment below letting us know!