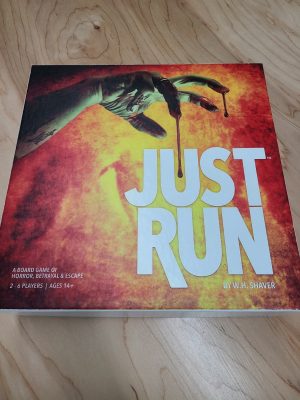 I received this physical prototype from Warren a short while ago and was really excited to get it to the table. The art perfectly matched the game and I was really curious how this would play out vs other games in the genre. Zombie fans, semi-coop, and survival fans, take a few minutes and check this one out. I’ll be playing again soon, but the gameplay I’m discussing in this review is centered around a 4-player game at a local game shop where we all learned and played together in about 2 hours, which is spot on to their time and speaks for the straightforward teach portion of the rules.

JUST RUN is medium-weight, card-driven, tile-placement board game, with both cooperative and competitive scenarios, from Mr. X.

You are survivors of the zombie apocalypse, trapped in an abandoned, treacherous, and unfamiliar building. Somewhere in front of you is safety. Right behind you, a growing horde of the undead. So quickly gather whatever gear you can find–and run.

Disclaimer: The publisher provided the prototype copy of JUST RUN: A Game of Horror Betrayal & Escape. The opinions expressed in the review are completely my own. 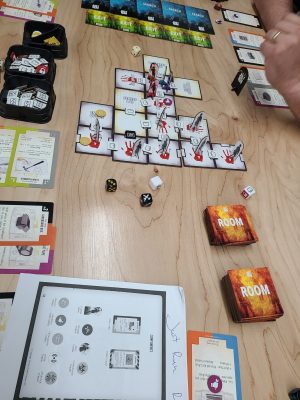 Immediately after receiving this package my expectations were high. The box, and all of the components were beautiful. Iconography was clear, and I knew that the title had received the attention it needed during the design phase. What really set it apart? The personally addressed and printed letter that accompanied the game: so professional and wonderfully detailed. It spoke of the game’s timeline, art direction, potential changes, links, etc. Everything that I, as a reviewer, would need to do some research and help direct others when the time came. Hat’s off for that alone.

I LOVED the setup/ first phase of the game (also changes for missions or variable setups). In the standard mode, instead of painstakingly running around to find some gear or die trying, you start with a handful of items and keep whatever you choose and have the ability to carry. It’s really simple and quick. What I love the most about it, is that you instantly jump into the action. There isn’t a lingering long startup like a lot of other titles I could name, it’s like 5 minutes and then, well, RUN of course!

Although the item version of the startup was great, I did find the first couple of rounds really slow of just opening doors and not a lot of zombies. It didn’t help a bunch of us rolled blocked doors and were a little delayed leaving the spawn point. Poor luck in our dice rolls likely played a factor. On the other side of that coin, for equipment wear and tear checks; we were far too lucky. In the entire game (and it was my first use of my hammer) only one item broke. The odds should have been 1 in 6 but it never happened again. As a result, it became too easy to deal with the zombies for the bulk of the game, that is until they bottlenecked at the end and ate 3 out of 4 of us… haha.

I think they nailed it. There are a few items that may change and sort out a couple of little kinks but when it comes to cards dealt and dice rolled no two games will be the same and I feel we had a unique game. I’m pretty excited to try some missions and alternate starts. It’s weird to be eager to be chased by zombies but I am committed to playing this a few more times at least. I’m giving this my stamp of approval and further to that, I will be checking into any future titles they release. As mentioned, professionalism like that is hard to ignore. The bar is set high for their follow up projects!

– Excellent rulebook, no hiccups on our first play.

– As the title implies, full octane rush to the end – this is not about lingering and searching.

– Not unlimited items – I really like how you only get a handful of things and then, good luck. You aren’t just stacked with everything and auto-win.

– Fast paced turns to keep everyone involved.
– Ability to sabotage, attack or trap another player

– A little more chance of ruining your items, I want to spread that chaos.

– Be able to spawn zombies in the spawn point if you don’t move out of it.

– Not an area they could have improved, but myself, I wish I used the barricade action.

– Hard to think of much else in this category: the game seemed to go well, aside from only 1 making it out alive. Our host, and myself both sacrificed ourselves making actions so that one may live! It was pretty epic.

I think this will be a new staple for fans of this genre. They were thorough, they did the work, and it shows. I’m really pleased with my new addition to the game collection and encourage you to check out the links below to see more on JUST RUN. That’s it for today, cheers!

After reading Brad’s review, if this sounds like a game for you at the time of this posting JUST RUN: A Game of Horror Betrayal & Escape will be live on KICKSTARTER starting in October 2022. Check it out and back it HERE.
Find out more at BGG.
Did you back it based on our review? Please comment below letting us know!

Check out JUST RUN and Mr X on: