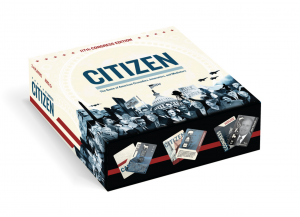 Playing Time: Varies on number of players, they say 1-1.5 hours for 2 players 1st time through

CITIZEN puts the power to change America where it belongs – in your hands.

When the revolutionaries who created our nation gave the power to “We the People,” little did they know they were also crafting the framework for a challenging strategy adventure that would emerge more than two centuries later. We proudly offer CITIZEN, a gaming experience for novice and aficionado alike that allows you to summon the power of the forces, faces, and fates that built America, and build it still.

Win CITIZEN by being the first player to pass your Cause through both chambers of Congress.

Build hands of complementary alliances that advance your Cause or hinder your opponents’. The more complex the hand, the more impact it delivers on game play. Powers earned by hand strength introduce even more strategic opportunity.

Disclaimer: The publisher provided the copy of Citizen.The opinions expressed in the review are completely my own.
Review: 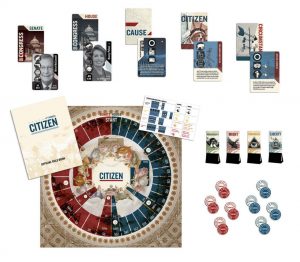 Let’s start with the rules, there is a lot to get through.  The Rules Book is 24 pages long.  Not all of it is rules for the game but descriptions of all the cards and the iconography involved in the game.  The book is very easy to get through and you are given a card to help you get through the game. But you need to really need to take your time with the rules

It is a very simple set up with board, player pieces, and cards.  Once the game is set up, you can jump right in to game play.

This game is spot on thematically.  You have a House of Representatives deck and a Senate deck and you try to get you causes passed through both chambers of Congress.  Using the icons on the cards and the combinations of the Power and Circumstance cards to complete the task.

Mechanically there are a couple of different basic mechanics used jointly to make you causes become law.  First you use a draft phase, where you build your hand to help you pass your causes.  Then based on the cards you play you move the spaces on the board. And draw up your next cards to play the next round.

Once the board is set up, you begin to play the game.  The first thing you do is decide the difficulty level, between 1-4 stars with 4 being the most difficult.  You can also adjust the difficulty and game time by playing only 1 cause instead of the 2 in a normal game.

Next is the draft phase of the cards.  You start with 21 cards, keep 11 and pass the rest, then 7 cards and pass, then 2 cards so you end with a deck of 20 cards.  The goal of the drafting phase is so you can complete your ICON sets.  Using the Icons on the cards, you build a set of 1-5 cards to advance your cause or stall your opponents.

You draw up 5 cards and begin your turn.  There is an 11 step turn sequence. Steps 1-9 are required and 10 is optional.  You draw a Congress card from the deck. Play you set based on the icons on your cards.  Use the Impact chart to see the power level of you card set and you can add a Power card.  Show your set and carry out the Impact.  Tally your votes from you set and move you piece around the board.  Discard the cards and replenish you hand from your deck of 20.  If you landed on a Circumstance Space and the end of the vote tally, you then play the top Circumstance Card and all players resolve the card.  Step 10 is an optional activity called Horse Trading. If you land on the same space as an opponent you can trade 1-5 cards with each other.  Step 11 is it goes to the next player.

When you have completed the 1st House track, you go to the next and do the same thing in the other chamber’s track.  When you completed both tracks and all of your causes, you will be the winner.

The artwork and components for this game are pretty amazing.  The board itself is based on the rotunda of the actual US Capitol Building in Washington, DC.  The House and Senate cards use the official governmental photographs of the Representatives and Senators. The iconography matches with the actual iconography of the political parties.

This game does a lot to make a boring subject enjoyable.  The idea of passing bills is not the most fun thing to make a game about.  Citizen does a good job with this.

The artwork and the usage of the official Congressional pictures really makes the game feel real.  The icons are clear and identifiable when you use the chart.

While this game has a lot going for it, it has a lot going on.  There are a lot of different types of cards and a lot of icons to understand. Almost too much to keep track of, much like real life American politics.  Fewer Icons might move this game along a little better.

Once you have played through it a couple of times you will cut down the game time tremendously. But you have to play through it.

I love the idea of this game, especially being a Civics teacher myself.  I have been trying to find more ways to incorporate board games into my curriculum and I hope to use this in my classroom.  This is where this game is designed to play.  I don’t see this game as one I would break out on my game night but I can use it in my classroom.

After reading our guest reviewer’s review, if this sounds like a game for you at the time of this posting Citizen 117th Congress Edition is available for purchase for only $57.95. Check it out and Get it HERE.
Find out more at BGG.
Did you back it based on our review? Please comment below letting us know!

This review was done by a guest reviewer.