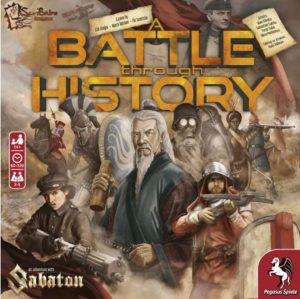 Quick Look: A Battle Through History with Sabaton

In A Battle Through History, each player wears the clothes of a time-traveling storyteller whose journey through historical eras enables them to relive epic battles alongside legendary troops and heroes. During a game, players play era tiles into the “Gear of History” to customize their deck of cards and move their character in space and time in order to fight and recruit troops from different historical battles or challenge opponents in player vs. player combat. As you build an army made of soldiers from different ages, you use it to collect relics from different places and times. Whoever collects the greatest units and the bravest heroes, leads them to victory, and gathers relics during their travels wins the game.

A Battle Through History, designed and published by Scribabs and released worldwide by Pegasus Spiele, is the official Sabaton board game, featuring a unique “gear and rack” action system, fight-based deck-building, 60 different historical troops, and eight famous heroes from different eras.

Disclaimer: The publisher provided the copy of A Battle Through History. The opinions expressed in the review are completely my own. 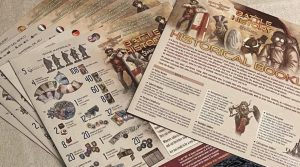 Time travel is always the number one storyline that drives me to the cinema, literature,  podcasts, and now BOARD GAMES. A Battle Through History is a compilation that I  have to admit upfront hits EVERY point of my fancy in life and that was before I even  cracked open the box.

As a musician and gamer, the two go hand-in-hand when stimulating the right hemisphere of the brain. When I read that SciBabs Games focuses their designs around unique bands from around the world, it struck the loudest chord with me. “Man, I hope  their games are good” – ran through my mind and sure enough they delivered from the  first note!

Setting up the game was very intuitive and all the components are as high of a quality  as you will see in today’s supply chain nightmare. They insist, upon opening the box,  that we play to the tunes of Sabaton which this design is inspired by. If you have not heard of them or want more on the band check them out:

It is a fabulous way to experience  gaming, though I found myself raising and lowering the tunes often to hear my fellow mates in their cheers and jeers as we strummed heavier into the game. 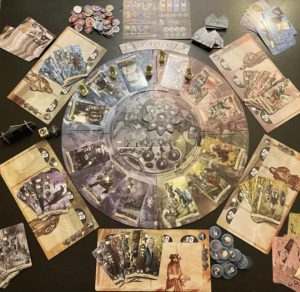 What makes any game experience instantly valuable is when you are introduced to a NEW never-been-played mechanic that sets it apart from all the others. Good or bad from that moment in my opinion is lullabied with the beauty that comes with designing such a unique action. In Battle Through History, your board setup contains a COG that is well ensconced on the board that requires you to move matching tokens along the base to turn the wheel to a different ear and activities that turn. This gave the game a perfect militaristic feel that accompanied not only the music in the background but the association with traveling through time with this clock like movement. Just Fabulous!

The game is set up in a series of 4 timelines that are laid out in a circular shaped board  and the rulebook illustrates placement and elements of parts well so the start up time was the same or a bit faster than most we have experienced. 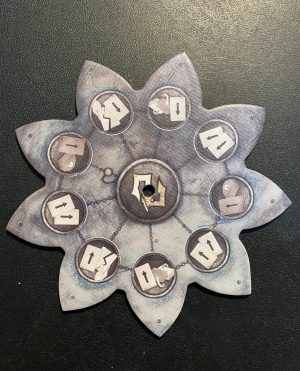 You start off by placing 1 to 3 “era teeth” tokens that spins the aforementioned COG  and helps determine which combat tokens you can take. This multiple options of play  is one of my only questions. Giving multiple turns of the COG makes the mechanic less valuable as most combos are met within the three changes. They must have play  tested this to need to offer that. I would house rule it to just one or maybe two.  The COG, upon turning one “tooth” , allows you to choose from two new deck actions,  eras to pick from and unique boosts in battle that help you manipulate your battle deck  to win points. The COG is truly the highlight of this game and creatively is designed to  provide not ONE, not TWO, but THREE different game play mechanics with one simple  rotation. A very ingenious design. Deck building is a key feature of play to help you in  combat and defeating your opponents consisting of drawn cards and player Sabatons.

This option of either battling the cards in each era or other Sabaton players is where  the game consistency can swing heavily to an obvious victor. We found that battling  your opponents in a smaller 2 to 3 player game gave the winner a much stronger chance of winning verses playing with 4 or 5 players. This is due to the number of potential points you can win with each combat victory. 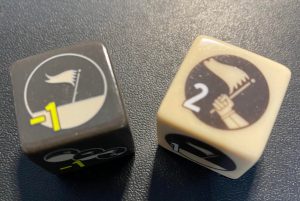 In battle, you move from long to medium to close range combat, each offering three unique strategies and odds of victory with the available cards in your hand. The defender must FIRST place their defense, which gives the attacker the advantage of working on the best odds of winning. The key element that always finds a way to be a factor in most battles are the two dice that must be rolled during every battle. If the attacker places more than 3 cards down as assets in battle, they must roll the “riskier” die with more negative effects. If they only battle with 1 to 3 cards then they get the lighter more generous die that offers advantages  during each battle. LUCK still plays a factor in changing history! 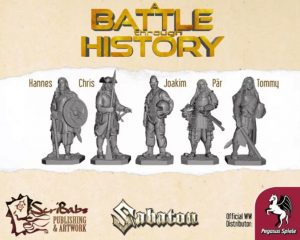 Each Sabaton (one of five band member illustrations) has the same starting deck that you battle with. You add new cards from each era from the board. The cards on the board are stronger and include elite cards that provide increase scoring at the conclusion of the game when defeated. The unique cards displaying historical figures of importance (Hero) give even more value not only for end game points but advantages within the game play itself to help in your battles against other era cards or opponents.

You collect victory points or “Sabaton points” as you add to your collection of kills and  items from each of the eras. The stronger the collection of relics that match color, the more they are worth at the end. There are SIX categories of ways to win points during  the session. Each is illustrated on a card provided with the game. The winning condition is the player who has accumulated the most points within these six categories. 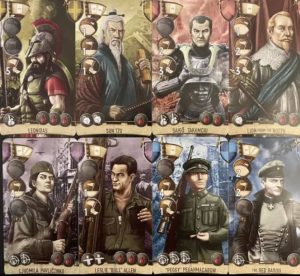 Finally, a mechanic that might not be completely unique but rare in use, is the LINKING of cards. Each NPC character or object you battle has a symbol on the top left and right corner of its card. Playing both in battle with the same symbol allows you to link them with a “link” token. This gives another layering of play versus a direct and standard card vs card skirmish of printed stats. The simple matching of shield and color provides a much needed point of defense that often turns the tides of victory in many battles.

After six to eight turns, the game ends and all players calculate the total points they have using the six specific results categories to determine the winner.

Over all, the table presence is solid and has a very militaristic feel that compliments not only the board game theme but the music by the inspirational band. The art work is  among the most professional in the industry and provides a visual landscape that rivals any euro style gaming adventure on the market.

The time machine travel is an overall arching theme, yet the time to learn and play was a refreshing short and did not take up the better portion of a game session to learn. With the exception of a misprint of one Hero’s era, it has a streamlined start to play and a very good feel in depth of play without the complexity found in many rules laden euro games of the day. If you love military history, music, and gaming (again it all is my JAM!) Then you will absolutely want to program your phone to time stamp a delivery of this one to your doorstep or transport yourself to your local game store for the purchase.

After reading Bogue’s review, if this sounds like a game for you at the time of this posting A Battle Through History with Sabaton is available for purchase from Pegasus Spiele for only €49.99. Check it out and get it HERE.
Find out more at BGG.
Did you back it based on our review? Please comment below letting us know!

Check out A Battle Through History and Pegasus Spiele on: