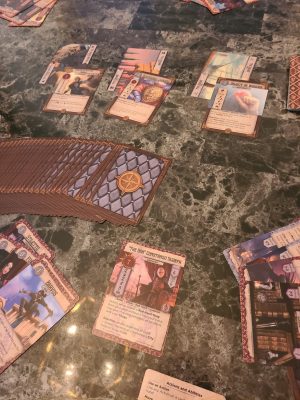 I received a physical prototype of this game and also got to play a TTS playthrough with Tom Brown, a member of their design team. I managed to earn a victory against Tom, in a tight last desperate action, but I also believe he may have been going easy on me. I didn’t have the same luck in my physical play and lost quite early due to poor planning around using my character’s actions (which caused them to tap and then I couldn’t use them for more appropriate actions). This game has a great combat mechanism that is a little rough around the edges to get used to but feels really exciting once you get the hang of it. Ultimately, cards have the ability to do a combination of three things: return damage, block damage, and give damage. Anything not mitigated will automatically go through. This true to swordfighting, high intensity, back and forth duel will not stop unless a card specifically says so, or you don’t return any damage. This is not your typical light-weight card game, but for those looking for a little more depth and some fun strategic gameplay, you’ll find it in 7 Seas: City of Five Sails.

7th Sea: City of Five Sails is an expandable card game set in the swashbuckling world of Chaosium’s 7th Sea roleplaying game by John Wick. Players control one of five factions as they fight to influence, control, and explore the independent and unruly city of Five Sails. It is typically played with two players, but multiplayer variants will allow more players to get into the game.

During the game, each player represents a leader who, along with their allies, explore locations and fight both with swords and with wits for overall influence over the city. Along with each player’s individual deck, 7th Sea: City of Five Sails also includes an element of randomness in the form of a separate, shared deck that represents the city itself with unusual characters, items, and events that change the  focus of the game. Combat is resolved in a unique “back and forth” style reminiscent of challenging swordplay.

Disclaimer: The publisher provided the prototype copy of 7th Sea: City of Five Sails Expandable Card Game. The opinions expressed in the review are completely my own. 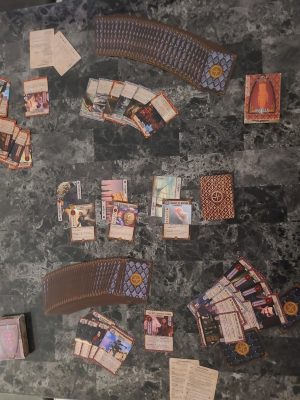 I had a playtest demo prototype that the team had used at a convention, so the overall look was not complete. I’m not sure what the finish product will look like here – I did not receive a game box, my rulebook was not fully edited and on computer paper, the cards were in tuck boxes for factions, etc. The cards themselves were good quality and a finish product (see in picture). The TTS version is probably the best to compare for visual expectations. I have pictures of both.

I really enjoyed how a poor decision has consequences and often immediately. They have a ‘tap’ mechanic in order for characters to make certain actions such as claiming a city; they call this Engaged vs Engard. Akin to other card games with tapping, a tapped character cannot perform further actions of that type. The main example of this is moving horizontally between cities (requires a tap) and then being unable to claim (requires a tap). I like that because it limits your ability to maintain and exert control and your moves need to be more thought out.

I found the rules themselves (which are subject to change) hard to digest. Once I played the game, it was a lot easier to pick up, but from the rulebook it seemed way too complicated. This tells me there is a lot of room to improve the wording. One thing I’d suggest is making things as simple as possible and not difficult for the point of theme or fancy words. I know some people like thematic tie in within a rulebook but I prefer the straight explanation and to keep the theme in the game and art. 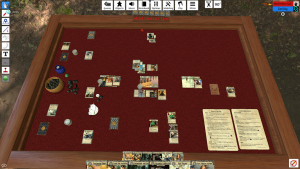 Taking actions back and forth made this game really immersive and had very little downtime. The battle aspect was really well done and felt pretty balanced – which had to be a tough obstacle. I think the amount of strategy and replayability that is stuffed into this game which consists of only cards (and not as many as some large card games) was surprisingly good. The thematic tie in was strong, which was to be expected as it was a derivative from an RPG of the same name (7th Sea)

– Art, design, and honoring the theme of the original RPG

– A not-so-simple but deep card game

– Battle sequence in a give-and-take style.

– Not a lot of luck involved

– Player agency/control in choosing their own new character and “scheme” each turn. 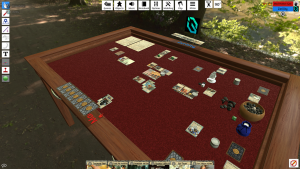 – Rulebook flow, explanations and examples: Short and sweet. It was way longer than needed.

– Players that have experience with the game have a large advantage.

I enjoyed both plays of this game and will haul it out for another game or two soon to decide where it belongs in my collection. Right now, I’m in a spot where I’m trying to decide its best audience and if it is the best game for a particular category. Much, or all, of my unease with the game stems from the fact it’s a partial prototype so it’s not entirely fair. I’d like a game box for portability and storage and I’d love a finished, smooth ruleset. Aside from that, I thought this was a solid game and that the team did a great job.

Here’s a link to their kickstarter campaign and their website:

https://pineboxentertainment.com/7s5s/
After reading Brad’s review, if this sounds like a game for you at the time of this posting 7th Sea: City of Five Sails Expandable Card Game will be live on KICKSTARTER until Fri, November 4 2022 6:00 PM PDT, and has a funding goal of $50,000. Check it out and back it HERE.
Find out more at BGG. (insert link)
Did you back it based on our review? Please comment below letting us know!