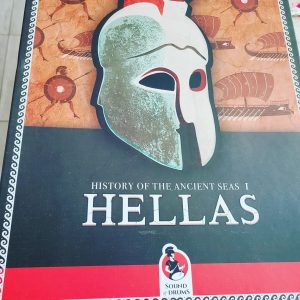 No. of Players: 2 (a 3 player and 5 player version are available)

This campaign is now live on Kickstarter. I was very lucky to get a physical prototype of this game. My opponent and long-time board game friend said in his opinion this was the best prototype (and game) I’ve received. He was very impressed with the game itself, the rulebook, production quality, and assortment of awesome custom wooden meeples. Frankly, I agree with him that this one stood out from my average delivery. It’s a geeky thing for me to say, but I knew it was going to be great from the second I opened the rulebook which was wonderfully laid out. This may be an indie publisher, but the overall take on this game is that it feels professionally made. There’s no faking a well-tested, planned and produced game. So I am happy to acknowledge one when the efforts were put in.

Over centuries empires in the Mediterranean Seas expanded their areas, mostly peacefully. Mostly by merchants and not by soldiers. There have been immense opportunities to build trading powers in the rich and fertile regions all over the Mediterranean Sea.  But the moment has come when the greed for more power and wealth is only stopped by another powerful empire at the frontiers of yours that has ambitions and plans of their own. Players will need to decide to send armies or diplomats to regions far away from their capitol to declare war or keep the peace.
Disclaimer: The publisher provided the prototype copy of History of the Ancient Seas. The opinions expressed in the review are completely my own.

If you prefer to watch it, here are my thoughts in video form:

There were a few items passed along to me with the prototype that I know are changing, such as the custom token for fortresses or the game box quality improvements but honestly, I didn’t notice anything wrong with this prototypes components or quality. The production quality and components were way past what I was expecting. You’ll have no issues with this product’s standards.

There is a lot to this gameplay to like but picking one thing, I thoroughly enjoyed how the main action phase was handled. Each player got 5 actions which were done in a similar fashion as a worker placement – back and forth and some limiting rules on what you could pick. This made for very little downtime and made it feel like you never really detached from the game. It also opened up strategies based on how you’d pick your actions. I also have to mention the gorgeous ship meeple!

I’m a numbers guy, and don’t mind lots of micro transactions or keeping track of values. That said, this game has several tracks that you are moving back and forth on. For any moves that affect your income such as claiming a territory or if an enemy contests or takes a location, you need to adjust your income accordingly. This happens a lot. So there’s a lot of small adjustments each turn that can be cumbersome. I can see that causing a game to drag for some players. 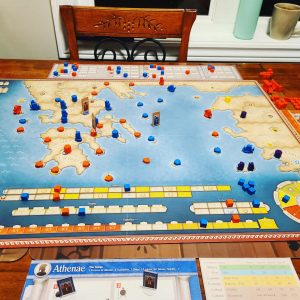 This game got a lot of cool aspects that will attract a large audience for a variety of reasons. It’s got civilization building, domination, war tactics, diplomacy, war, resource management, action placement, and area control. On top of that, it’s got a neat historical thematic tie-in. This 2-player only version, Hellas, is a great main event game for two. I’d be curious about the three player game but I don’t think I’d enjoy a 5-player game. I know there are rule adjustments in those versions but I’m not familiar with what they are. I’d fear the 5 player game would go on forever if you didn’t have the right group.

– The quality of the game components, boards, and wooden components was great.

– Unforgiving nature of the game- your decision matter!

– Multiple mechanics that were all functional in the game

– Not luck based (no dice rolling or card drawing) 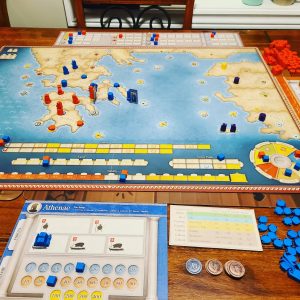 – Too much counting, adding and subtracting.

– A way to speed up the first two turns or a quick-play setup for faster games or veteran players.

– Maybe revisiting how their starting player is decided. That part seems to snowball a leader’s position.

You really get to see this game unfold around you. You notice how a few moves here and there didn’t seem like much but how they can start to gain you an advantage over your opponent (or fall behind). You’ll feel the give and take of war and true feel for playing “the long game” style tactics. You can strategically loose this or that while plotting for something else. Hellas is a true test of self against a wonderfully interwoven set of objectives. Everything has its importance and your decisions must mirror that. All games in the series offer a unique experience and I’m eager to try more.

Here’s a link to their kickstarter campaign and their website:

https://soundofdrums.org/
After reading Brad’s review, if this sounds like a game for you at the time of this posting History of the Ancient Seas (relaunch)
will be live on KICKSTARTER until Thu, October 6 2022 11:45 AM PDT, and has surpassed its funding goal of $33,411. Check it out and back it HERE.

Check out History of the Ancient Seas and Sound of Drums on: