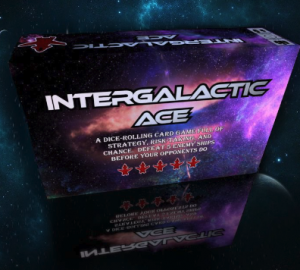 You are a hotshot, rookie fighter pilot. You are looking to prove you have what it takes to be the best in the galaxy by being the first of your opponents to get 5 Kills and become an Intergalactic Ace.

In the simple, strategy/chance game, Intergalactic Ace, players compete to be the first to shoot down 5 enemy ships. Upgrade your ship to prepare for battle, take your chances in Dogfights against Enemy Cards, and go head-to-head with other players to steal their hard-earned Kills.

Each game comes with 6 beautiful laser-cut wooden spaceships to keep track of each players’ stats and Kill count. Additionally, each game has 50 stat marker pegs, 32 kill markers, 50 cards, and 2 dice.

Disclaimer: The publisher provided the prototype copy of Intergalactic Ace. The opinions expressed in the review are completely my own. 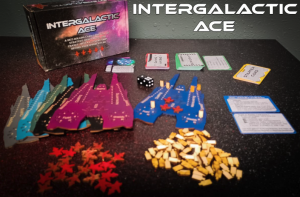 I was always frustrated as I played around with the long lost required skill set of playing the game “Tricky Triangle”.  Through my childhood, this little gem was always found stuck to every diner stool thanks to last night’s pancake special.  This movement of peg over peg dance to complete the mission of leaving one lone soldier peg standing, gave me such agita that I could almost never finish my grits.  The gamer in me with my lack of spacial calculation abilities would always leave me with a Fail as the check was paid and I was dragged out off the premises. Intergalactic Ace upon my first play gave me that sense of activation as I moved the pegs round the ship layout that creator Jack…… provided in an early prototype copy of his game.  The addition of dice and cards did quickly transform this childhood frustration into more of a chance based encounter which this simple mind did enjoy.

That is where it remained. Simple and repetitive in play. If you love the quick skirmish play of WAR like card play or the idea of repeating set mechanics like that of love letter with the option of changing targets from NPC to Player and back again then you will love this space ship themed creation.

Don’t forget to enter our GIVEAWAY!!!! 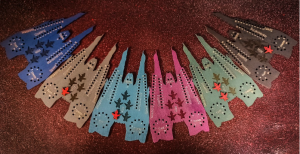 The elements, even for the prototype, were crafted with great precision and amazingly well packed.  The game comes with 6 precut space ship boards that are distributed to each player in the game.  All players receive their starting cards and KILL tokens that are a smaller version of the large player board. They are so cute!!! Really! (…and probably not the best game for very young kidos around ). The pegs used are small and though mine were prototypes, I am confident the end product will also have this warning plastered across the box in some manner.

Each player records a starter card that randomly provides the initial stats for your ship which you reflect by placing the pegs in those corresponding numbered holes. If you and 4 to 5 other MAVERICK wannabes are all battling, you each pick one upgrade card to give you a boost in a couple Areas of your ship’s mechanics in play.

Play begins with a roll off and highest player chooses three simple actions: 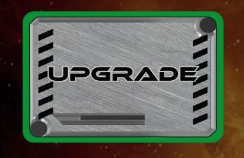 The enemy ships are a fun and cheeky art style with names that keep the play light hearted and offers a giggle or two upon first sight!  The rinse and repeat of this design again is great if you want a straight forward game that does not require you to solve the worlds energy problem or the formula for flight.

The win condition is to kill the enemy ship or your competing player. This is performed by comparing your stats to that of the enemy card defense number. Easy peasy right? Well…. To be able to open fire and rip an imaginary hole in the side of the hull, you have to be equal to or greater in 3 of the 4 ship allocations. This is where the tediousness of mechanics take flight. As a flighty soul myself with the attention span of A gold fish, I found this tougher to do than it appeared.  Remembering and looking back and forth to determine who has the higher number for each allocation became somewhat exhausting.  Please note, this is probably a ME issue so should not discourage those with a photogenic mind or simply someone that can keep a thought for more than 2 seconds. You will be fine, and easily know if you are engaged in the combat.

If the attacker finds that they can’t, they retreat which will lower one of their stats as a penalty for their action and dishonorably discharged by the rule!

If you can, roll the two D6 dice that come with the game and reveal your fate.  Roll above the defense, win the kill, roll below and take 5 shield damage along with a reduction in one of your stats by one.  If shields are at zero, then you begin to roll back your progress towards ACING the game by scraping off and removing a kill from your cockpit display. 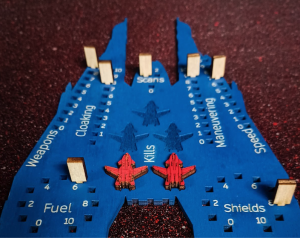 If it is even then, well, nothing happens- a good ol’ stalemate.

Each encounter will cost ya 3 fuel. You must have that to engage any enemy. This may force you to take extra turns and actions to prep for the attack and often gives your opponents the time to take you out. So use it wisely.

The PvP mode of combat simply trades kills back and forth based on roll results .

This tug of galactic war continues until one player scores the 5th kill and ends a the round unopposed. In a tie ending with 5 kills each, fuel becomes the breaker and then shields . If still a tie, you have yourself the rare sighting of Multiple pilots graduating the game with the prestigious designation of being a Galactic ACE.

Though my expectation of this game was to be much more sophisticated in design, after a couple rounds of play and battling a couple of different pilots (ie my kid  and a buddy) the very quick set up and 20 minute game play, I give this baby a thumbs up. It’s like doing a flyby of the bridge or In my house, the FRIDGE.  I look forward to seeing how the final version and elements of this game come together by the production house and hope Jack sees this through to fruition .  It deserves a spot on your self next to all the other grab and go games. I’d even play this now at that Diner while enjoying a plate of Moons over my Hammy or syrup dripping banana pancakes!

Don’t forget to enter our GIVEAWAY!!!!

See what Brad thought in his review of this game!!

Check out Intergalactic Ace and Art of Steel on: