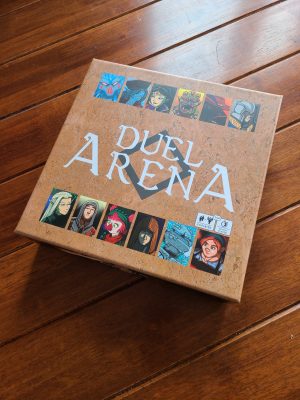 This is a self-published game from Soul Binding Games and is already available online on their website (link below). It was sent to me by its designer, Jordan Benson. I was drawn to this game by its gladiator inspired theme and also because I enjoy dueling games. Let’s dig in and see where I feel they did well or could improve.

Duel Arena is a strategic resource management game in a medieval fantasy setting. Each player takes control of a Hero with unique abilities and must travel around the Arena collecting weapons and armour to become stronger. You must carefully manage the use of your items, as well as your Gold and Health. Only by correctly leveraging these resources will you be able to outmaneuver your opponents and claim victory.
Disclaimer: The publisher provided the prototype copy of Duel Arena. The opinions expressed in the review are completely my own. 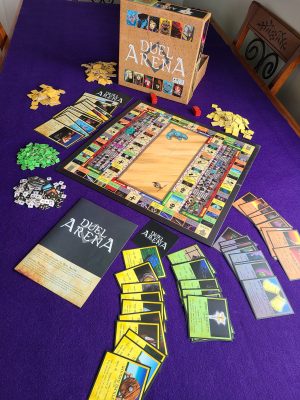 I was pleased by the short rulebook. It surprised me as the game itself had a ton of components: a dozen characters with unique abilities, a sizable number of items, multiple punch sheets of tokens, etc. The total quality of the print was above average, especially the gameboard and box. Visually, the art was okay but one thing that stood out to me was the really wide border on the game board. The black edge ate up real estate on the board that could have been used to enlarge the spaces a bit more which would come in handy when more than one player were on the same space.

I noticed the inside lanes were aimed more towards combat while the outside track was for gathering gear and preparing for battle. I liked how that matched the design of the board itself and that working outside the physical arena and heading inside the arena meant a shift in your objective/intent.

The large flaw I see in this game is that it is predominantly luck based. There are a lot of games out there that involve a high amount of luck so that may not be a deal breaker.

It’s an old school roll and move, with some interesting components and theme that was very easy to play and learn. The game is very accessible and would be playable for beginner gamers.  I was lacking the agency and control over the outcome of the game that I usually enjoy. Duel and strategy games in this genre typically have a bit more tactics involved. However, as everything in the game is decided by rolling a dice, it didn’t allow me to make any key decisions or strategy. With that aside, the best course of action is to pick up a couple of items early and then save your money for serious items that cost more.

– nice use of gameboard to match theme

– large assortment of gear to pick up

– ability to heal, repair, or gain gold outside of combat

– cut down the chance and luck in the game

– the whole gold system could have been simplified. It didn’t need 6 different values of currency ranging from 5 to 1000. They could have used 5, 10, 50 and averaged all their values to suite. Starting gold had a wide discrepancy, item costs needed a tweak.

– smoother wording and organization of their rulebook. For example, there’s a full paragraph explaining the difference between saying roll a die vs 1d6 when there are only d6’s in the game, I’d just pick a notation and stick to it rather than use both and spend time trying to explain it. Or, putting the component section at the front instead of the back.

– money values are hard to read; white text on yellow.

– no control over movement which is especially pesky when should be healing or repairing but need to use what could be a lot of turns worth of rolls and simply roll past the spot you need when you get there.

– the strength and costs of equipment felt a bit all over the place. For example, in my first game, I bought a card for rotting bandages that basically ruined the game. It was super cheap, and dealt direct damage to life regardless of armor or if you won the duel. So, in two uses of the card, I won the game even though I lost both of the duels I was in.

– I didn’t like how multiple cards damaged an opponent (like mentioned above) when you didn’t win a duel. Another example was a mirror card that you could do back the damage instead. These felt over powered and off theme. 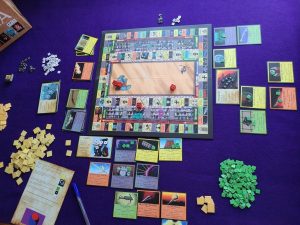 I would have loved the opportunity to help more and play a role during the design phase of this game but it was already published when I was contacted. I see room for improvement, but I am known to be a bit of a perfectionist. Depending on your preferences, this game could be a choice for a duel or skirmish game that is easy for all players and doesn’t have an advantage for experienced gamers. Perhaps it would be a good choice for a double date, for youth gamers, a low intensity game for when you’re a bit burnt out, or having your folks over for dinner? Those are the types of settings I’d recommend. The link to their website is below, read up on it if you like or reach out to them with questions.

Listen to the 2 minute podcast about Duel Arena HERE!

After reading Brad’s review, if this sounds like a game for you at the time of this posting Duel Arena is available for purchase from Soul Binding Games for only C$54.99. Check it out and get it HERE.
Find out more at BGG.
Did you get it based on our review? Please comment below letting us know!

Check out Duel Arena and Soul Binding Games on: