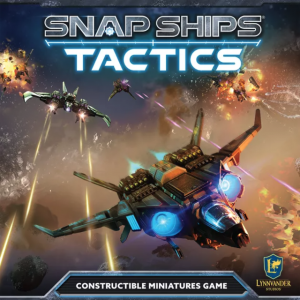 Year Published: On Kickstarter for less than 24 hours at the time of this posting! 2023

In the future, humanity is under constant attack from a brutal alien hive mind known as The Komplex. Facing them are the pilots of the Forge: commanders of spacecraft known as Snap Ships. Fast attack craft, interceptors, armored bombers, dropships, and support craft – Snap Ships are constructed from modular components allowing ships to be outfitted on-the-fly for the specific mission at hand.

In Snap Ships Tactics, each player builds a custom miniature ship (or a squadron of them) and commands them in intense tactical combat over a series of rounds. Ships are completely modular and built from a library of hundreds of unique plastic components. Ships maneuver across a freeform battlefield, as players allocate power to their ship’s unique systems to move, evade, and fire many different weapons. They can take advantage of battlefield hazards and terrain to gain the upper hand and seek to destroy the ships in their opponent’s squadron.

Snap Ships Tactics: because the best ship is the one you create!

Disclaimer: The publisher provided the prototype copy of Snap Ships Tactics. The opinions expressed in the review are completely my own. 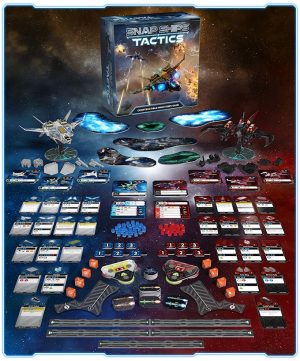 As a kido who grew up in the thick of action figures and the plastic toy explosion, the little gamer geek in me dreamed of a developed rule set to complement my toys. Oh, to play a 1 v 1 -G.I. Joe skirmish, add attack modifiers for He-Man, or even a system to quantify how powerful my ship building skills were at legos.   Just 2 score and a few months later, Snap Ships Tactics scratches that childhood itch.

This system created by Josh Derksen and artist Gino Stratolat provides a visually stunning approach to transforming toys into a gaming system, and introducing new gamers to the hobby. This is the biggest takeaway of the entire review.  Good on you.

In Snap Ships Tactics you can either enhance your already purchased toy ships by purchasing the bases and cards that turn your hand flown starship into a miniature board gaming BOSS.  Step aside X-wing,  there is a new kid….”on the table?” and the 90mm scale ships dwarf that of today’s standardized 28 to 30mm minis. 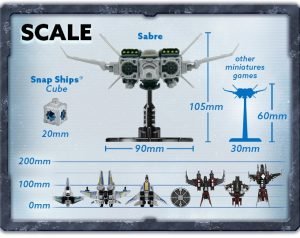 Before we dive into the details and without going in-depth into the rules, which refreshingly isn’t really that deep,  the obvious thing to note is the amount of table space you do need to play the game.  You can still use the 3 x 3 foot standard (tournament style) mapping but you’ll run into each other more than bumper cars at the county fair.  Not to mention everything will then be in range.   This however is perfect for a youngster or new gamer looking to just get into the action quick with their newly constructed flyer.

The customization IS the game, with players able to modify their ships to their play style (IE Fire Power and racks of missiles vs defensive armor and shield generators to brush off attacks). 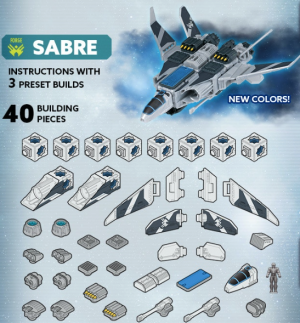 It offers 1v1, 2v2, 3v3, and even solo and coop campaigns. Of course the multiple ship options will require purchasing the expansions to create the epic battle on the dinner table. 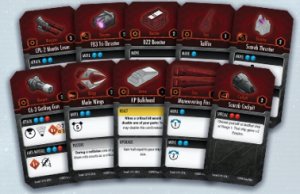 Each module you add to your ship corresponds with a card that has stats to utilize in the dogfighting combat.   The symbols are very easily identified and defined, again, making the newest of players feel comfortable hopping into the imaginative cockpit and joining the formation.

You start out with a chaise-like card that has your basic structure and hull points. You then add the attachable modules to it to develop your final star ship layout.  Turns happen in a back and forth structure with activation.  Dice are also a big part of the chance and play of the game. 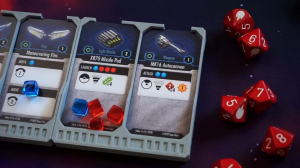 You allocate actions based on power cubes that come with each ship and their build-outs.  The number varies depending on the type of ship you build and the modules you have added to it.  Allocating your BLUE energy cubes to utilize that part of the ship and venting your RED cubes is the way to cool your ship and reduce the heat that it has accumulated for such activities.   Throughout the game, this mechanic is how to maintain your ships action abilities and advantages.  You may only use the action on a card once per turn and requires you to remove the heat cubes before reactivating the action on the next turn.

Depending on how you configure your ship, the attacks consist of lasers, projectile guns,  and missiles that provide a moment of suspense as they require one complete turn before impact and dealing damage.  Unlike the lasers and guns that deal instant damage upon successful rolls, the missiles can have counter measures taken by ships to reduce or eliminate the impact of the hits.  The defense is set up with a ships evasion stat.  This provides an easy math formula that is used in most combat games today. Attack number plus any evasion determines the hit number that must be rolled or above on the dice.

The mapping terrain provides added incentives to fly through or around which offers evasion bonuses and heat removal based on the type that you engage your movements within. Any standard table can be used for game play. Of course, you can purchase printed matts and other layouts as well from the company.

When playing coop or solo, the AI ships are activated by the drawing of cards from the unique AI deck that comes with the game to support this campaign type.  The system offers a nice way to partner up with a friend to battle together vs the typical head-to-head format often directed by this genre.  This makes play with beginners and your little tike more enjoyable. The non-confrontational session offers a great sense of accomplishment when working together. 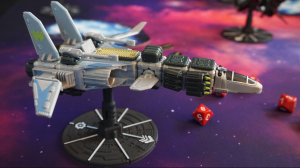 The victory condition is being the first ship or ships to bring all enemy’s damage points down to zero.  This happens by successful hits from die rolls and a unique feature where each roll could result in a critical symbol.  This forces the target to flip a module card over representing a critical hit. You take damage and/or resolve what is described on that side of the card.  The determination of which part was hit is often based on the amount of heat on a card or the lack of Blue energy cubes on a given part of the ship that might have been previously used in past turns. A player can repair each part by designated the limited blue cube resources to that module’s repair costs.  This of course limits your ability to conduct other actions that turn including attacks and movements.

If a ship overlaps any base off another ship, the game provides a collision result that requires both ships to roll for damage. This demolition derby approach offers just another way to fight and strategize moves to maximize damage each turn.

Snap Ships Tactics turns a beautiful modular lego-like toy kit into a gaming system that seamlessly provides a whole new dimension to the imagination and play-time experience.  Like one of my favorite movies as a child “ The Last Star Fighter” where I dreamed of getting the call to fly for a space force and save the earth,  you get one step closer to this with the ability to strategize and move your self-created action piece into battle.  This game is for the young or young-at-heart and the kid in all of us will flip the ignition switch within our minds to launch a great table top experience with this one.

After reading Bogue’s review, if this sounds like a game for you at the time of this posting Snap Ships Tactics will be live on KICKSTARTER (for 18 more hours) until Thu, July 28 2022 1:00 PM PDT, and has surpassed its funding goal of $65,000. C Check it out and back it HERE or below!

Check out Snap Ships Tactics and Lynnvander Studios on: