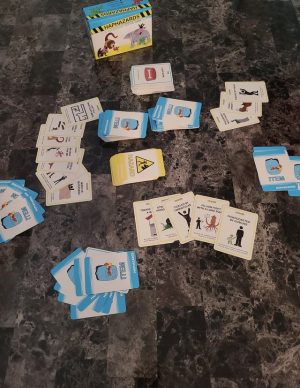 Haphazards was, as the box claimed, a ridiculous rescue game. Players were faced with silly situations such as “fleeing a raging centaur” and had to choose their favorite way of being rescued by the other players items and story they fabricated using them. Thanks to the Jabas team for sending this along to me. I can easily see how it was created for family fun and interactions as their origin story spoke about in their rulebook.

In a world where unspeakable hazards are waiting around every corner, you and your friends must use your wits to rescue each other from definite disastrous doom!

HAPHAZARDS is a fun-packed card game for 3 to 8 players.  You must use your cards and your wits to rescue your friends from certain disaster.
Disclaimer: The publisher provided the prototype copy of HAPHAZARDS. The opinions expressed in the review are completely my own. 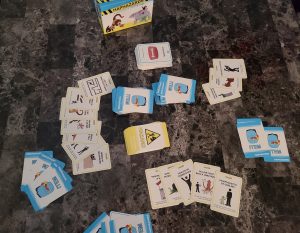 This is a card-only game, of which the cards were a high-quality with a linen finish. The box was decent as well, but for some reason the base was taller than the top and it didn’t close fully. The art was simple, soft, and brightly colored, but did the trick.

I enjoyed the ability to play this with nearly any age group and how it encouraged the use of imagination.

I am rarely a fan of a kingmaker mechanic in games and that is the case here as well. On each player’s turn they choose who wins that round – regardless of what they used or the story they told.

This game is very similar to Apple to Apples, except instead of being anonymous and using a single card, players use 3 cards and it’s clear who owns the cards as they take turns telling a story with those cards. It is a fun little game for families, young kids, and good-natured friends, but due to the ever-present ability for players to choose a person rather than a card to win, it would not be my first choice as an icebreaker or for a game group. People tend to feel bad about choosing the same people or the opposite and choose them on purpose in such scenarios and it becomes less about the cards and more about feelings. I played this with an adult group of 4 and it got mixed results. However, I tried it with my 4- and 6-year-old and they had a blast. Their stories were a bit ridiculous, but that’s kind of the point. As a children’s game, I think it hit its mark.

– all players get to interact on every turn

– easy way to create some laughter with family/friends

– hazards for a wider variety of rescuing needs

– mitigate choosing the winner. For example, players stack their cards [secretly] in a single pile keeping their 3 together. The reader has to make up the stories, and the other players vote. Then whoever owns the cards used gets the hazard.

– It says it can play as 8, I’d use teams for that count, 8 individual stories each turn would take a really long time. 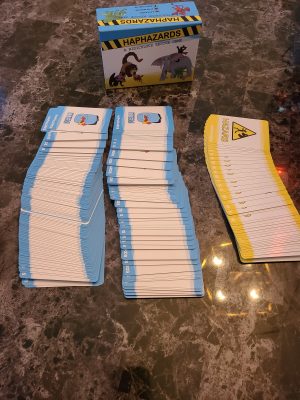 This was a prototype and the game is still as of July, 2022, on kickstarter, so this is subject to changes and/or improvements. As mentioned, I’d recommend this for young children, families, and good-natured groups. It’s a carefree way to spend some time, unwind and relax. The foolish nature of the game should be embraced rather than resisted.

https://haphazardsgame.com/
https://www.kickstarter.com/projects/jabas/haphazards-a-ridiculous–rescue–game?ref=discovery&term=haphazards
After reading Brad’s review, if this sounds like a game for you at the time of this posting HAPHAZARDS – A Ridiculous Rescue Game will be live on KICKSTARTER  until Mon, August 1 2022 5:00 AM PDT, and has a funding goal of $9,500. Check it out and back it HERE.
Find out more at BGG.
Did you back it based on our review? Please comment below letting us know!

Check out HAPHAZARDS – A Ridiculous Rescue Game and JABAS LLC on: