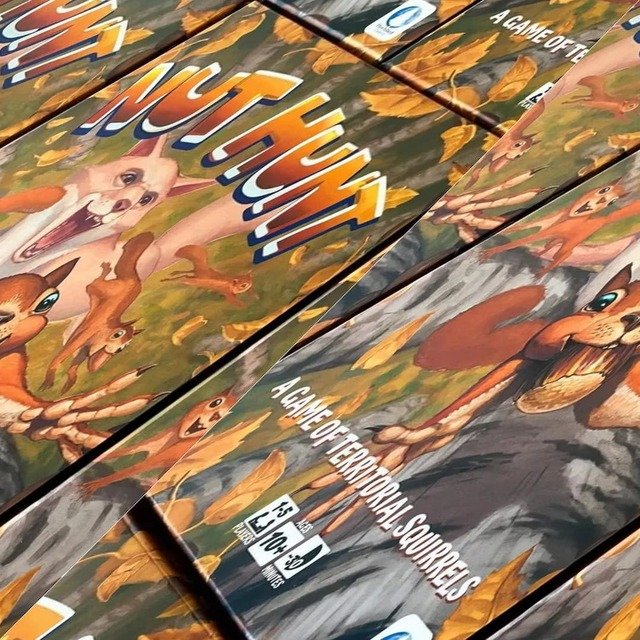 I met up with the designer, Jasper Burch, originally on a Facebook group and stayed in touch over the course of the design phase of his game. We connected for a 2-player game via TTS and took it for a test drive. It’s currently live on Kickstarter and if you’d like to check it out, there will be a link at the bottom of the review.

From the Publisher:
Welcome to Nut Hunt, a fast-paced squirrel placement game, where you’ll forage for nuts, recruit squirrels, and hassle the fox in your bid for control of the forest. Earn points by building nests and connecting territories to complete your secret objectives. But watch out for the wily fox who roams the forest scattering squirrels. Turns have a simple structure with one mandatory action (moving the fox), followed by a choice of three optional actions (recruiting a squirrel, hassling the fox, or scouting an objective). Plus, there is a free action that can be taken at any time: to exchange three of the same nut for one of any nut. A game of Nut Hunt ends when a player places their 4th nest.
Disclaimer: The publisher played the TTS version of Nut Hunt! with me. The opinions expressed in the review are completely my own. 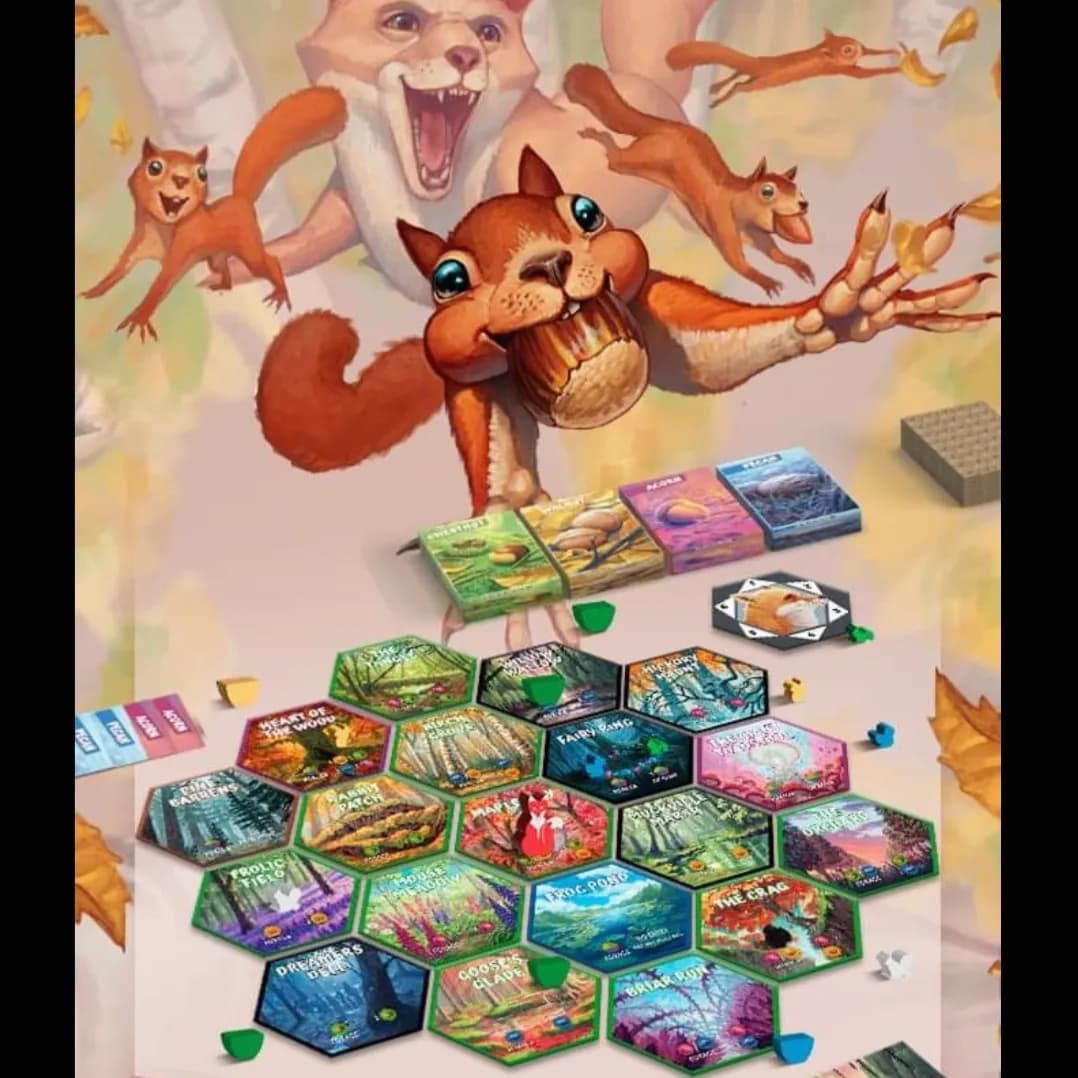 The digital components for this game were a direct 3d model of the physical components for the game, and they looked great. I did see a bunch of videos and photos of this game in its physical state and can say that even though I never got my hands on it, I know that its quality is sound. Initially, I love the theme, bright colors, and art throughout. I have never associated squirrels with nests, even though they do make nests, but the nests in Nut Hunt fit in smoothly.

My favorite piece of the game is the fox and I think if we are being honest, we all love a good ol’ fashioned hunter vs prey chase such as the cartoon classic coyote vs roadrunner. Note: no squirrels were harmed in the making of this game unless you count their strategy 🐿. What I enjoyed the best about the fox was how you never knew which way it would go because a dice was rolled each time to choose its direction. If the fox lands on the same tile as any squirrels, they all scatter. I really liked that part as I felt it was what embodied the struggle of the squirrel(s) trying to complete their tasks and constantly getting distracted- Hey, a Pecan, I need that!

I’d have to play more to give an accurate assessment, but I’m interested if there needs to be a -2 penalty for not completing routes. If you successfully complete a route, you get the point value of the card, let’s say 3. If you don’t complete it, you get -2. This seems pretty punishing by creating a difference of 5 in a tight point game (if an opponent succeeded with a route and you did not). However, as you have the ability to draw extra objectives, I understand the need; perhaps a -1 would fit better though.

It’s a nice entry level euro game, that you can get to the table to share a couple of laughs amidst the excitement. The short game length and super quick turns make it an ideal choice for seekers of a lightweight game with a feel-good atmosphere. If only we could understand what squirrels are saying, I’d love to hear them weigh in. All I can imagine is “Get off of my lawn”, you know how territorial they can be

– Element of chance and resolution 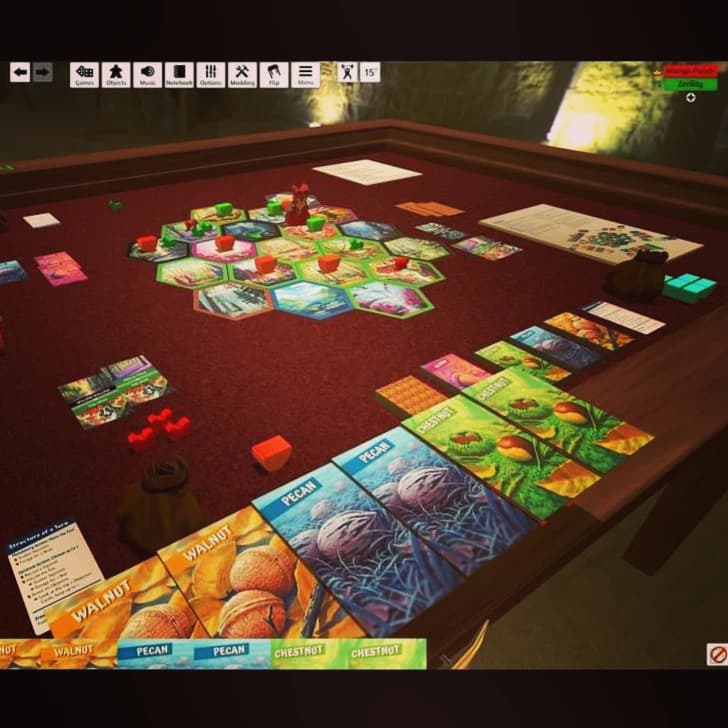 – This was a short and sweet game. I didn’t write anything down during my playtest that I would want changed. It’s already at that “just right” point to fit in its class for complexity, length, and enjoyment. Changing anything would likely change its genre and/or style and I was pleased with the vibe the game gave off.

I got a little cheeky in the above categories and said all that I needed to. I’d recommend this for family game night, for new gamers, for people that don’t know their game group well, and for a light time filler with just enough going on to not be complicated but still engaging.

After reading Brad’s review, if this sounds like a game for you at the time of this posting Nut Hunt! will be live on KICKSTARTER until Thu, June 30 2022 1:00 PM PDT, and has surpassed its funding goal of $10,000. Check it out and back it HERE.
Find out more at BGG.
Did you back it based on our review? Please comment below letting us know!

Check out Nut Hunt! and Pine Island Games on: