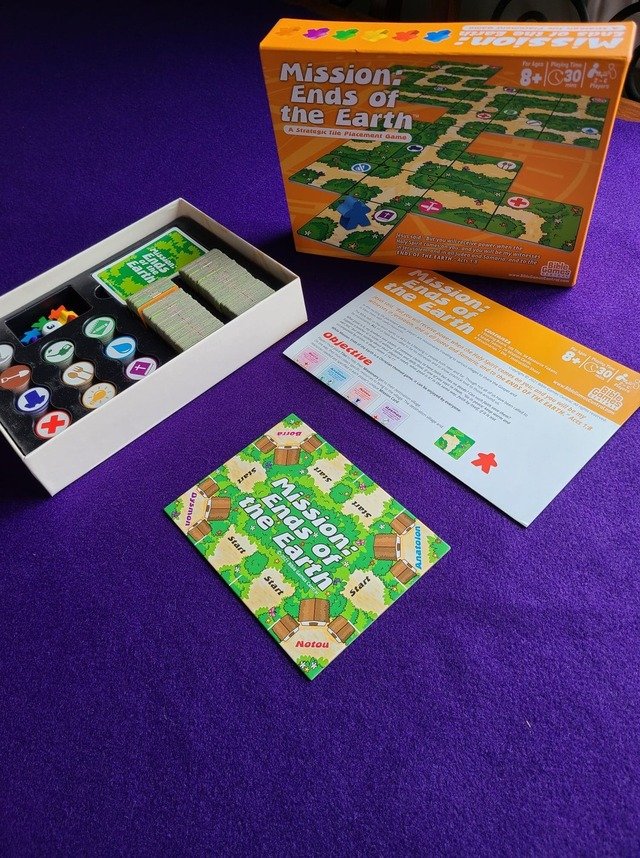 I decided to give this game a try when Bible Games Central were kind enough to reach out and offer me a copy for review. I wasn’t familiar with them or the game and didn’t have high expectations, but I am glad I gave it a try as it surprised me with a genuinely nice game with a theme about helping others.

In this strategic tile placement game, you must help your missionary get to the destination village with the required resources.

During their turns, players:

Players will need to collect 5 different resources to complete their Mission cards. The first player to reach their destination village with the required resources wins this game!

Disclaimer: The publisher provided the prototype copy of Mission: Ends of the Earth. The opinions expressed in the review are completely my own. 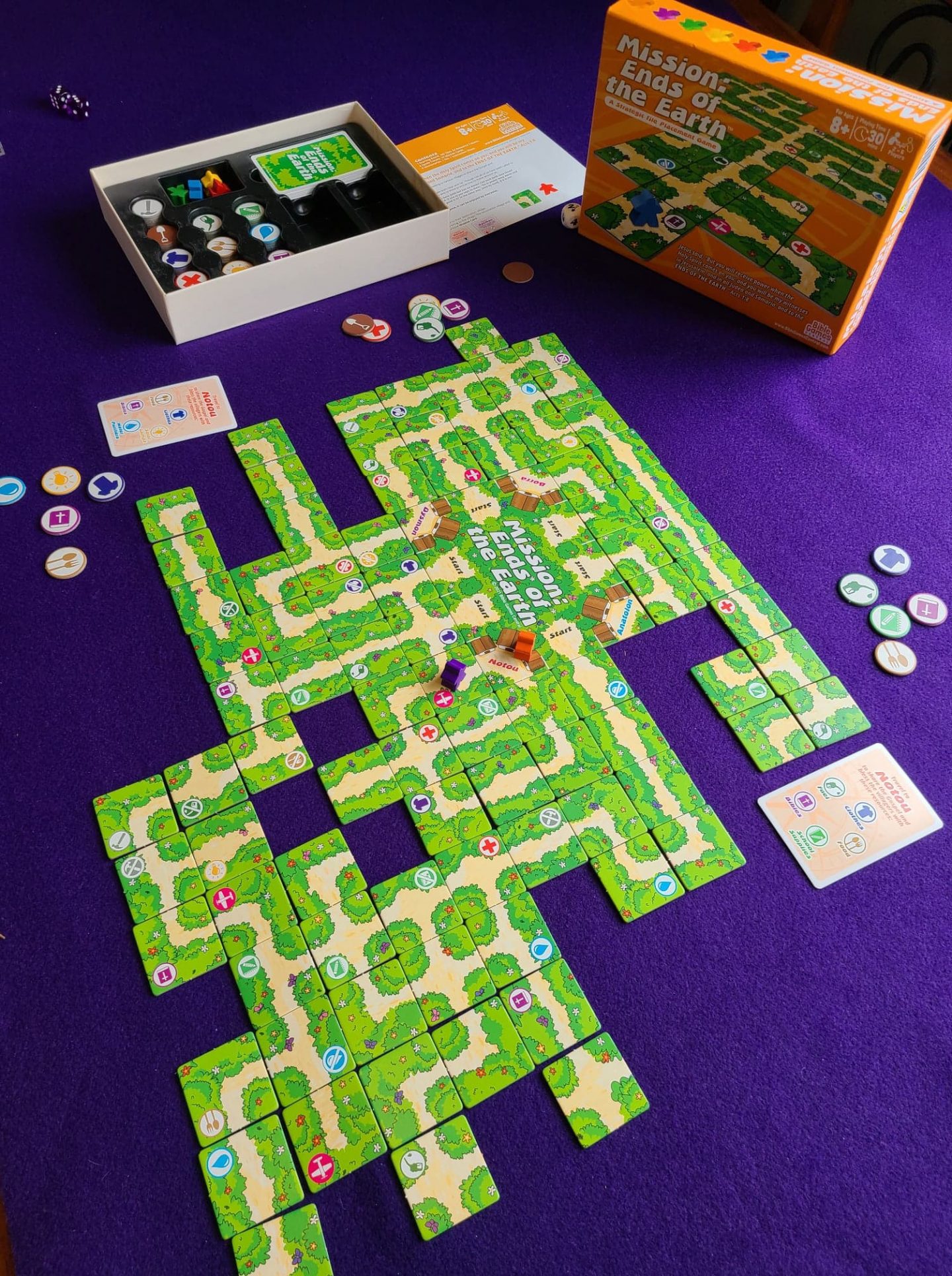 The components were all of a good quality and the rulebook was a great length and easy to understand with good visuals. I especially enjoyed the art and colors of the tiles.

My favorite part was their “Spade” action which allowed you to use a collected spade token to take any previously placed tile and move it to a new location. This gave players some control over their strategy.

Two other honorable mentions in this category are: calling your actions first, and crisis. Players having to call all of their actions before taking any of them kept the game from being too easy and the crisis tiles which claimed all resources of the crisis type played a similar role.

As with all tile placement games, be sure to shuffle them before starting. If you don’t draw a useful tile to you, you still have other options on your turn but if you need a resource that has yet to come up at all, it can be a little disheartening. Personally, I did not find this to be the case but one of the players I played my third game with needed a resource and didn’t have the opportunity to get it before the game ended so I decided to list it here. I believe that to be the nature of games and the luck of the draw.

The game has a similar feel to the popular “the Crew” trick taking game but with a slight twist. I can see what the game has the potential to be, but think that it needs some reworking and polish before it’s ready for production.

– Right amount of difficulty level for game length and age rating.
– Use of Crisis tokens to add some “spice” to the game
– Calling all actions before each turn (after die roll) which adds an extra layer of risk/reward and control over the gameplay.
– Individual secret goals (mission)
– The ability to bluff by collecting resources not on your mission card.

– Making it accessible to any player by not making the Christian theme too aggressive in the game. I appreciate how they get their message across and have a game with a positive message while not turning away the many gamers who avoid heavy political or religious themes. It doesn’t affect the actual gameplay.

– There were several tiles that had a bush/hedge blocking the middle of the path which I know meant you can’t cross there but there was no visual example in the rules for beginning or younger players who may get confused there.
– Though it would confuse an otherwise simple game, I’d like to see some limitations to the use of the plane, specifically about placing it immediately next to your final destination. Placing it there feels like finishing with a wild card in a card game which is generally not allowed.
– It didn’t affect my enjoyment of the game, but as mentioned above, some players do not enjoy heavy religious or political themes. It’s hard not to include such a theme when it is the point of the game itself but in this particular instance, I’d consider not putting a biblical quote right on the front of the box or having it in bold and colored font at the top of the rulebook. Instead, I’d have put it on the side or back of the box and have it a matching font. Unfortunately, this will make it slightly less noticeable to some but it will cast a wider net.

I’m pleased with this addition to my collection and would break it out to teach tile laying mechanics to new players, to share an evening with family, to play with kids, or as a light, shorter game with just a sprinkle of competition. It’s easy to learn, fast to set up, and I approve of the mission to bring things to and share with others who require help. I’d love to see a sister game of the same style for saving the environment or animal species.

After reading Zerility’s review, if this sounds like a game for you at the time of this posting Mission: Ends of the Earth
is available for purchase on biblegamescentral $29.95. Check it out and get your copy HERE.
Find out more at BGG.
Did you back it based on our review? Please comment below letting us know!

Check out Mission: Ends of the Earth and Bible Games Central on: