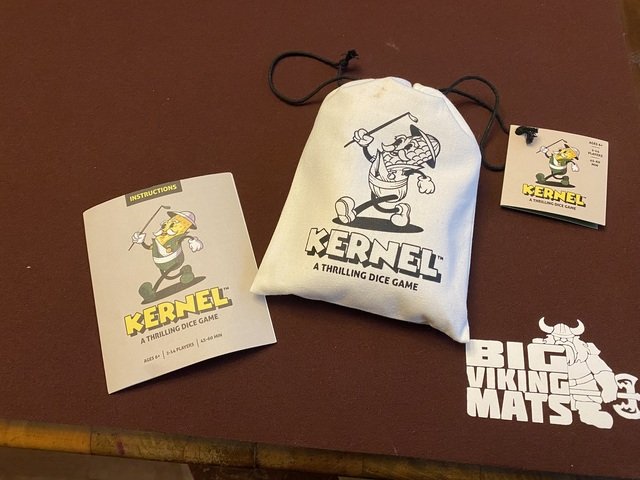 Kernel is a press-your-luck dice game for small and large groups. Players collect as many kernels as possible all while racing to 100 points. Learn in under 5 minutes. Be smart, quick, and lucky to take home the win. The player that collects the most Kernels wins!

Disclaimer: The publisher provided the copy of Kernel. The opinions expressed in the review are completely my own. 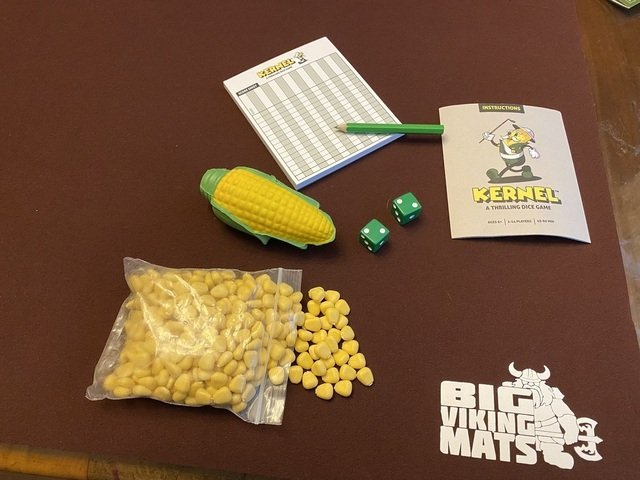 Press your luck games are always a joy. Do you play timid and bank a lot of small amounts? Do you play aggressively and try for just a few big ones? My friends and family are fans of Zombie Dice and Don’t Go to Jail. So, when Kernel came around, I had to give it a chance. A quick search about the game made it a little more appetizing. It comes in a cloth bag, has plastic kernels, and a foam CORN COB. What’s not to like?

To set up, each player receives 20 kernels to start. Set 12 more kernels off to the side. These will be given to winner of each of the three rounds. Place the corn cob in the middle of the playing area.

The rules are more complicated than you might imagine. The active player rolls the dice. Based on the results, score as follows:

After an active player rolls, the player can choose to bank the points and kernels earned and pass the dice to the next player. Or, the player can push their luck and try for more.

The theme could be anything really, but I love the corn theme. Something about the plastic kernels and the foam corn cob make this game better. Mechanically, I love the push your luck aspect. I love all the rules around the 1’s, 6’s, and doubles. It keeps everyone involved in every roll. In most push your luck games, you are waiting while everyone else goes. There is nothing for you to do. In Kernel, you can grab the cob for bonus kernels. Lastly, I love that you can score 100 points, but not win the game. It isn’t about the points from the dice. It is about the kernels. This makes for a very interesting strategy.

Kernal has very simple gameplay, despite all the thinking needed after each roll. Roll the dice and score as mentioned above. The first person to bank past 100 points triggers the end of the round. That player can continue to push their luck to see how far past 100 they can go. Why? Well, more kernels can be earned, and each player gets another chance to go. Once all players have rolled that final round, the person with the most banked points earns 4 kernels. After 3 rounds, the player with the most kernels is the winner!

As a note, if a player ever runs out of kernels, that is okay. They just would not lose any, but they could gain more to get back in the game.

Another quick note, if anyone grabs the corn cob when double 1’s are rolled, or when doubles aren’t rolled, or flinches like they were going to grab it, that player loses 1 kernel.

The artwork just consists of the character, The Kernel. And he is awesome. Maybe a little too close to Mr. Peanut, but awesome, nonetheless.

The components of Kernel are amazing. The corn cob that you fight over is made of foam like a stress ball. Being squishy works well as when you grab it, it will flatten and not hurt your hand when others smash your hand vying for it. Their fingernails, well, more on that later. The plastic corn kernels look very realistic. This is both good and bad. They are small, so a HUGE choking hazard to little ones. But they look so good. The cloth drawstring bag nicely fits the whole game, the scorepad, pencil,

Hands down, the production copy on Kernel is through the roof. The addition of the doubles and grabbing for the corn cob mitigates downtime between turns and keeps everyone engaged on every roll, whether its theirs or not.

As the back of the rulebook states, this game works well teaching kids about risk management. I would win by banking only a few points each turn, while my son would have over 20 points and still roll. For some reason, he just kept doing it. When it paid off, he would jump in points. When it did not pay off, he fell even further behind.

Finally, the person that crosses the 100 point mark to end the round might not actually win the game adds a bit of strategy to the game. Since it doesn’t matter who scores the 100 points, but who has the most kernels, you can delay the end game by trying to amass more kernels. I love this!

First off, make sure that everyone has trimmed their nails. On more than one occasion, I won the cob, but the back of my hand paid for it.

Three rounds can seem like a lot. Rolling snake-eyes can slow the game down. You might be better off playing to a lower score than 100 per round to keep the monotony from creeping in. The back of the rules does suggest playing to 50 points.

Lastly, and this is no knock on the game, I cannot play this game over video conferencing. I love playing most push your luck games with my friends. But, we cannot reach through the computer to grab the corn cob. I guess I will have to wait to show this game to them the next time we get together in person.

Kernel entertains. Is it complicated? Is it a meaty game? Nope. But it is an entertaining one that my family enjoys. Kernel involves a lot of laughing, jeering, and finger pointing (You Flinched! No I didn’t!) With more players, it is even better. The bag holds the whole game nicely and it is easily packed for road trips. For $15.95 on Amazon, you cannot go wrong.

Push your luck, games about corn?

After reading Adam’s review, if this sounds like a game for you at the time of this posting Kernel is available on Amazon currently on sale for only $15.95. Check it out and start popping HERE.
Find out more at BGG.
Did you back it based on our review? Please comment below letting us know!

Check out Kernel and Nalik Games on: