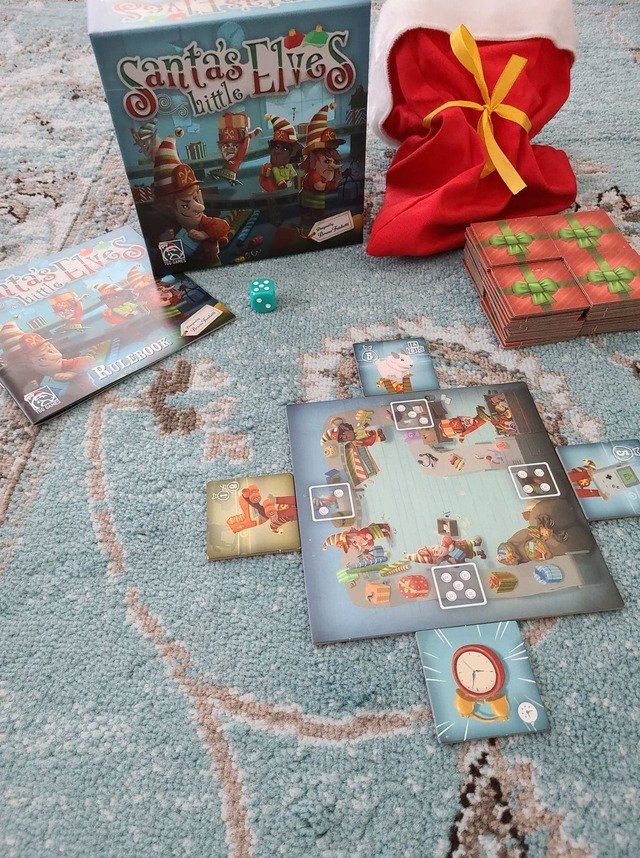 Year Published: Coming to Kickstarter May 2022

Thank you to TGG for sending me this funky game that takes a twist on how we imagine life for Santa’s elves. I took this along to a game night I was invited to and it was a hit. In recent memory, this is a game that stands out for having people enthusiastically engaged, laughing and carrying on with each other. The bluffing and psyching out your opponents is well done to make it between only the active and following player (game direction can rotate to make it either the player to your left or right).

From the Publisher:
This is an unpublished prototype and hasn’t had an official post from the publisher, but this was a snippet was taken from the back of the box:
“Welcome to the North Pole! As one of Santa’s elves you work on the factory line all year long building toys for kids who don’t even know that you exist and probably wouldn’t care anyway. It’s exhausting work with bad pay, unpaid overtime, no vacations, no chance of promotions, and you only get 1 day off a year!”
Disclaimer: The publisher provided the prototype copy of Santa’s Little Elves. The opinions expressed in the review are completely my own.

The box and components were high quality; They even had a mini toy bag to store tiles that would make Santa proud.  I was hesitant to accept the theme of disgruntled elves with their grumpy faces all over the box but it did make sense for the plot of the game. I do feel this could have been reskinned to improve its overall acceptance and to appeal to their target audience better which was listed as 14+. I liked their gameboard and custom dice that worked with it. Not to contradict myself, but I do want to be clear that they did a good job of the Christmas theme and components. Initially though, I wasn’t a fan of the box art and probably wouldn’t have picked it up had I seen it in a store which would have been a shame because it turned out to be a great game.

I really loved the bluff mechanism and facing off against another player. You choose a die value (corresponding to the slot on the gameboard) and if your opponent guesses right, they get the prize but if they do not, you get it. This gets especially exciting when there are special tiles or “bundles” on the board which have some special rules. This core aspect of the game kept all players engaged and invested in the game while providing good natured victories and defeats throughout. Special shoutout to the ‘Good Game, bro’ tile that replicated an original Game Boy.

I don’t know if it’s a great sign, or a bad thing to say, but it’s pretty much just the box art that threw me off. I enjoyed all aspects of the gameplay itself and feel this game is good as is with one exception: I tied for the most points in one of my games and didn’t see a tie-breaker rule anywhere. We agreed on a house rule immediately that the player with the most roller-skates would win (as its the only golden tile), then the most broken toys, then the least number of tiles.

This game was fast-paced and played smoothly. Those I played with enjoyed the game as much as I did and even asked to set up another time to play again. I’m very fortunate to get a lot of games to the table and have a great group to share them with, but its still rare occasion that a game is liked enough by everyone to be requested instead of trying a different game from our collections. 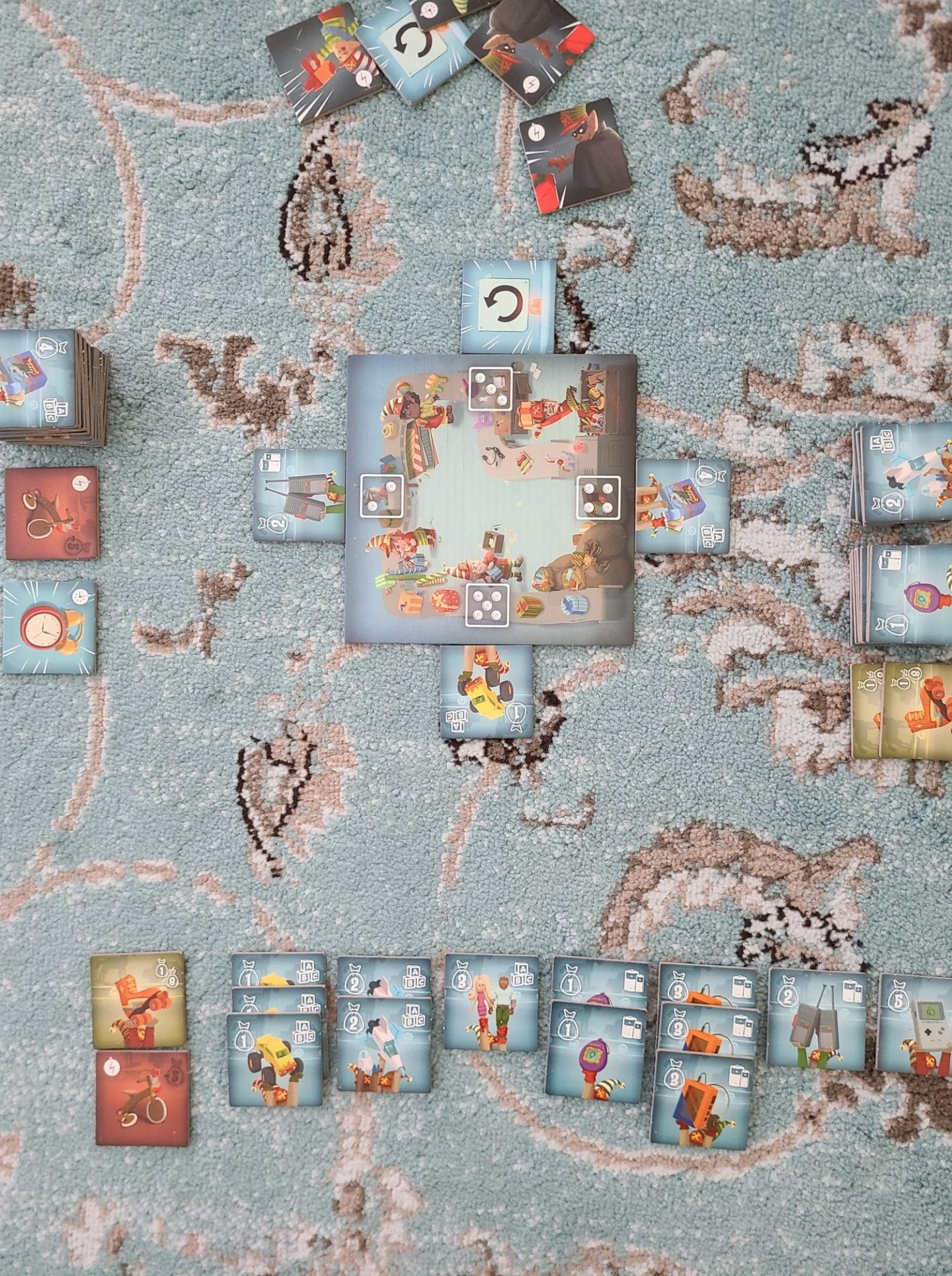 – Custom dice that pairs with gameboard

– Bonus types and balance of each.

– Special tiles and uses. Especially the tile that steals only from the lead player which prevents ganging up.

– The Santa toy bag for storage

– Like other successful games of its genre, its short and sweet.

– Forgive me, but I’d like the cover art of the elves to be a little more sneaky and crafty in appearance rather than irate. This is most prominent in the one on the far right who is sporting what we’d call locally, “a face on it like a boiled boot”.

– I still feel the story of the game could be improved but it’s not that big of a deal.

– That’s about it, I’m giving this one an approval.

Even though it is a Christmas-themed game, I’d bring this to the table anytime with the right group of people! During the holidays it’s going to have a place on my table no matter what. This will be adopted as a new tradition in my household – some holiday spirits may become involved. This is one of my favorite bluffing games that I’ve ever played and it brought me back to the great memories of playing Perudo (aka Liar’s Dice or Bluff) as a kid which was a wonderful feeling in and of itself. For giving me that flashback of wonderful nostalgia alone, I’d like this game, but it stood strong on its own. I would happily recommend this title. I feel it plays better as a 3+ player game, but it can play with 2. I’d bring it to the table with old friends, anyone that likes healthy competition, those that are quick to laugh and slow to complain, anyone that likes a bluff or press your luck style game, people that only have time for a short visit or brief interim, and as previously stated, anyone that enters my house during the holidays whether they want to or not!

After reading Zerility’s review, if this sounds like a game for you at the time of this posting Santa’s Little Elves
will be live on KICKSTARTER until Tue, June 7 2022 8:02 AM PDT, and has a funding goal of $3,000. Check it out and back it HERE.or pledge below using the snazzy button!

Find out more HERE.
Did you back it based on our review? Please comment below letting us know!

Don’t forget to
Enter The GIVEAWAY!

Check out Santa’s Little Elves and TGG Games on: