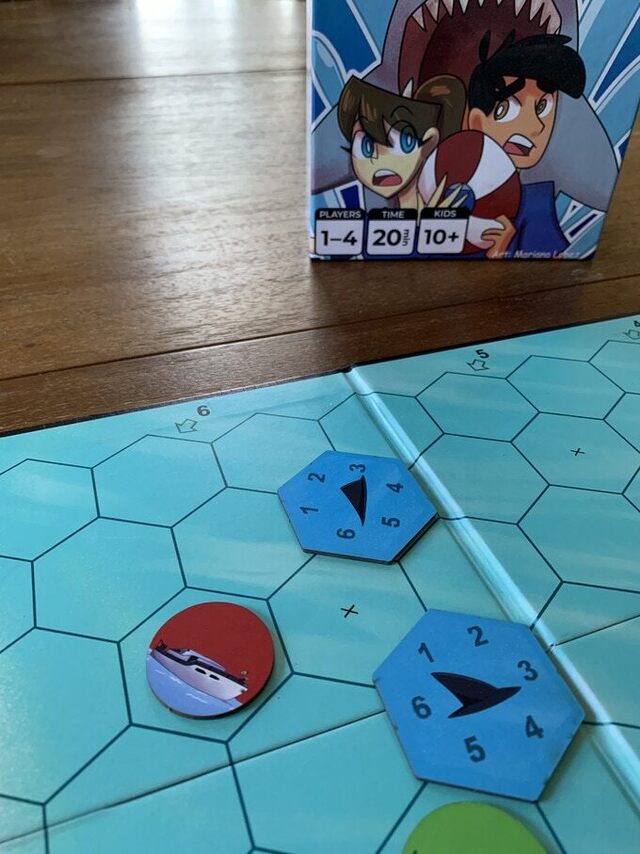 Disclaimer: The publisher provided the prototype copy of Shark Hunt! The opinions expressed in the review are completely my own.
Review:

Shark Hunt was originally a Print-and-Play game created by John Kohn.  Bearded Board Games Co-founder Adam Collins bought it, played it, and Loved it.  He then licensed the game from Mr. Kohn and turned it into a full fledged board game that is a lot of fun for Kids and Adults alike, even though it is designed more for kids to enjoy.  I found myself playing it multiple times with my oldest son who really loves it.

The set up for this game is really easy and the rules are very simple.  There is a board, 5 sharks, 4 boat discs, 5 scoring tokens (4 players and 1 shark) and 1 D6.  The boats are placed on the harbor to start (on the final version there will be 4 ports instead of the prototype 1 port).  The sharks are placed on the starting “X’s” out in the water.  The number of sharks is based on the number of hunters +1 or +2 depending on if you choose to play normal or advanced difficulty.

There are very few rules to this game which make teaching this very simple since it’s designed for kids.  The rules are clear and easy to follow.

Shark Hunt’s theme is all in its name; you are hunting a shark before the shark hunts you.  Like Jaws, you are the captain of a boat and you want to prevent the sharks from attacking the beaches and ruining summer vacation season.

Mechanics are a simple 2 phase, roll-and-move, sharks then players.  Whoever is the first to 10, player or sharks, is the winner.

Gameplay is very easy.  Each shark is a hexagon with numbers 1-6 on the side.  When you roll the die you move all sharks to the next hexagon in that direction.  Then you move the boats the same number of spaces as the die towards the sharks.

During this movement phase, when you land on the shark or when the shark lands on you, a “battle” ensues.  When you land on the shark, you now roll the die hoping to get a 1 or 2. If that happens you  “capture” the shark(in the final version and if unlocked as a stretch goal on Kickstarter, there will be a 2nd D6 with Shark fins on it to indicate winner). If you capture the shark, you earn a point moving your chit up the scoring tracker.  If you “lose” the shark escapes and moves 2 spaces away from you.

If the shark lands on you, the die roll will determine if the shark sinks your ship or you escape the attack.  If you lose you abandon ship and take a dingy back to the port to get “a bigger boat” (Jaws pun). If you “win”, you escape to the next hexagon to possibly attack on the next turn.

Another thing that can happen during the movement phase is the Sharks earning points. When the shark moves and hits the beach, it is an attack. The shark gets a point.  If the sharks score 10 points before you do, the Sharks win the game.

It is also possible for the sharks to move off the board and into the “Deep Blue Sea”.  If this happens, they are not available to be attacked that round.  The next roll and move phase, you will roll the D6 and bring back the shark into the ocean at that number indicated by the die and board.

The components are a good quality chit board and a 6-sided foldable board.  It also comes with a standard D6.

The artwork is aimed at the audience.  The character chits have a cartoonish person on them and the boat disc is the color and a picture of a boat.  But that is all that is needed.  No need to overproduce something.

The board has clear markings of ports and shark starting positions and is mostly a blue ocean because that’s where the action takes place.  There are 2 sides that represent the beach for the sharks to attack. And 2 scoring rows along the side and bottom, 1 for players and 1 for sharks.

This is a no nonsense to the point game – roll and move, roll to fight the shark or avoid attack.  It is a great game to start to introduce strategy to younger players.

The other really good thing about this game, is the different difficulties and variants this game can have.  You can put out as many sharks you want or can even make this a cooperative game.  The cooperative game aspect I believe is very important.  As a parent there is that fine line between letting them win and teaching them to lose gracefully.  With the cooperative part you can also teach them to work together as a team.  When they are ready to be competitive it becomes a whole new game to them and makes the game highly replayable.

There is only one real problem I found in the game, and the only real no way to fix it would be to roll the die better.  Sometimes the sharks get to the edge of the board and can “fall off” due the number rolled on the die.  This causes the sharks to get a little bogged down. It becomes a repetitive action of fall off, re-enter on next roll, and then fall off again on the next roll.  It’s good that the sharks re-enter in a different space and the players need to rethink their strategy but it can also get a little crowded in areas and make the game feel a little slow sometimes.

Overall, this is a cute and fun little game truly designed for kids to play.  I played this with my kids and they are ready to play it again.

After reading our guest reviewer’s review, if this sounds like a game for you at the time of this posting Shark Hunt! will be live on KICKSTARTER until 5/11/2022, and has a funding goal of $5000. Check it out and back it HERE.
Find out more at BGG.
YCMKB GSXXSXQ NSBOMDYB FYSMO SX K CRKBU DKVO
Did you back it based on our review? Please comment below letting us know!

Check out Shark Hunt! and Bearded board Games on:

This review was done by a guest reviewer.