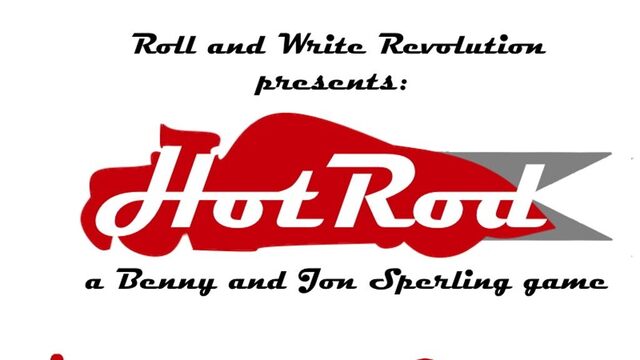 HotRod is a game of collecting fast cars and modifying them to race on different terrains. Players use dice to create tracks, collect HotRods or modify them. Every 5th turn, players will complete a scoring round for one of the Bonus cards. Players may want to delay a bonus card, but doing so will only offer them half of their points.

Specializing in certain Terrains or Track types can help players win big when they race each of their collected HotRods at the end of the game.

HotRod is playable by 1-100 players (or more) in 30-60 minutes. HotRod is part of Roll and Write Revolution! Digital release initially, digital and physical copies will be available from the Game Crafter after the campaign ends.

Disclaimer: The publisher provided the prototype printable copy of HotRod. The opinions expressed in the review are completely my own.

I have most, but not all, of Lagniappe Games roll and writes. I need to remedy that and get the two I am missing. So, when I saw that they had another one up on Kickstarter, it was a no-brainer to back it. Luckily, I was also given a chance to playtest it off the working prototype and rules. I have never been disappointed in their games, and Hot Rod does not either. It can play pretty much infinite people and is great for video conferencing gameplay! Check it out.

The setup is simple. Each player needs a scoresheet and a writing utensil. Supply two standard D6. I suggest a dice tray as well. Shuffle and flip up 5 of the bonus cards, setting the four unused off to the side. Setup complete!

The rules are a bit of a mess. We tried watching the video on the Kickstarter page, too. Combined, we were able to infer the intent of the game. Each round, the pair of dice are rolled, and each player must use the results in one of three actions:

After each dice roll, mark off the top most light on the racing tree. When the fifth and final light is colored in, the next bonus card is scored. It is imperative that you read the five bonuses that will be used in the game. This can affect how you score the dice during the round.

The game ends when the 25th round has been marked off, the 5th bonus scored, and all final racing is over. At the end of each scoring round, you can race a completed car on a completed track. You score one point for each of the terrain hexes is goes over plus and bonuses.

The theme runs throughout the game. The cars are being built. They are being modified. The mechanics (car mechanics?) work well. Mark off a corresponding die face. The tree light used as a round marker is just another way the theme presents itself.

The gameplay for Hot Rod is just as simple as it sounds. The strategy comes from having to make decisions about where to use each die face. Do you try and build a car? Do you attempt to get the long road track together? Maybe you should upgrade the car.

Racing at the end of the rounds is where we got lost. We went with the car can only drive on terrain that it is built for or modified to race on. We scored one point per terrain hex it raced through, plus any bonus on the car. Some cars can add one point. You can also attempt to race the cars in the right bonus round, essentially allowing you to score more points, maybe even close to double. If you score the bonus in its corresponding round, you get full points. If you cannot or chose not to score it in its corresponding round, you can score it in a later round for half points. Simply put an “X” in the full box denoting that you do not get full points, and then when scored, put the points in the half box.

Here comes the decision making I was talking about. Each car can only race one time. Once it races, you put its score in the race box for that car, and you can no longer race it. We played that you can no longer upgrade it either. Why? At the end of the game, each completed car (built) is worth three points. Each car that is completely upgraded is worth an additional two points. Also, each terrain hex can only be raced on one time. You must plan your courses accordingly. My son made a huge road track that cut right up the middle of the terrain hexes. I thought it was a bad idea, but he won by 5 points (see picture). So, who am I to judge? You need to make sure that you race all your cars, or they score zero points. Again, my son did not even race all his cars, and I thought that would doom his score. Nope. 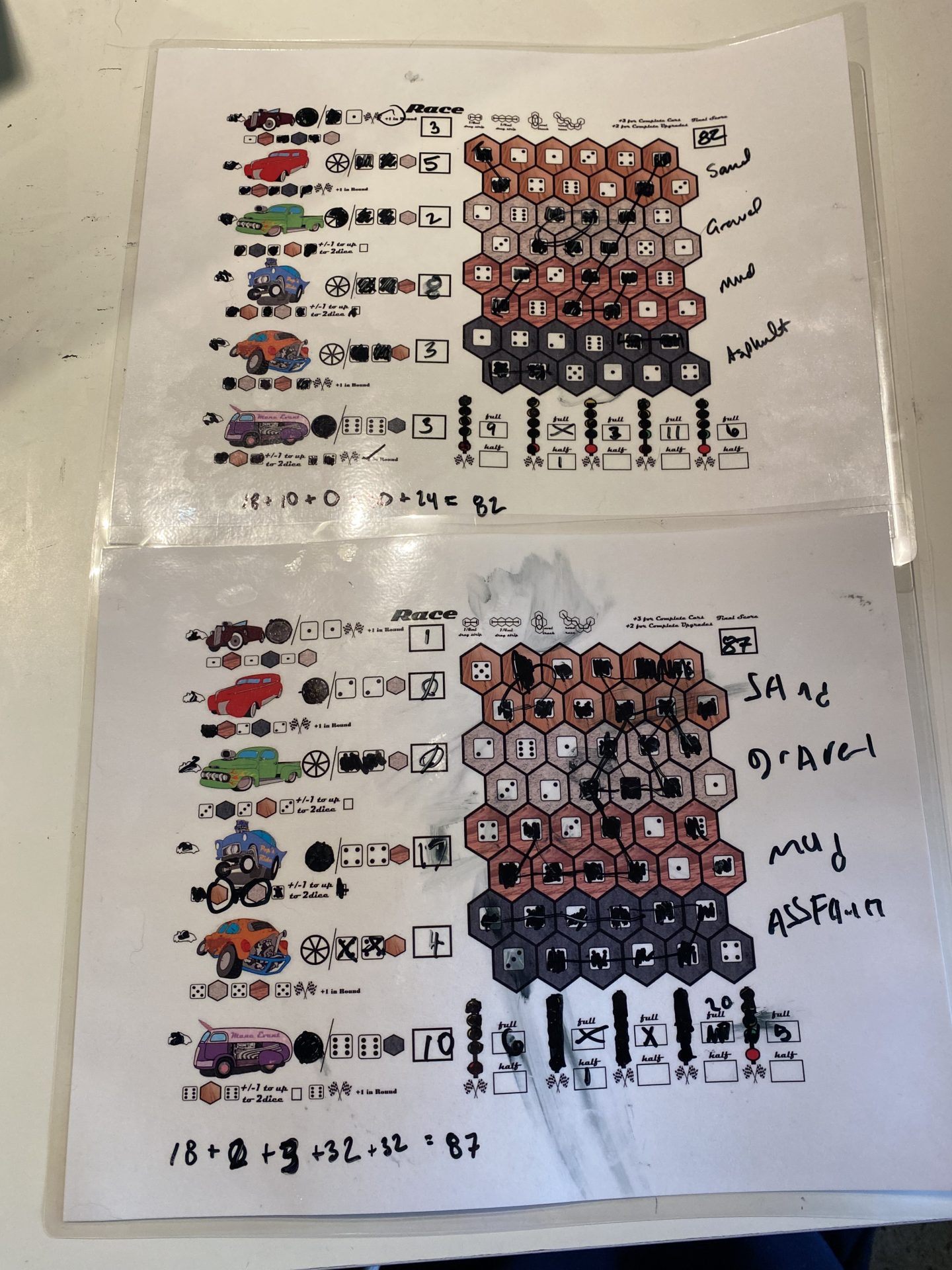 Atop the points amassed by the completed cars, fully upgraded bonus, and bonus round scoring, an additional point for each unused, but marked off, hexes is scored. As I mentioned, my son beat me 87-82. I raced all my cars, fully upgraded 5 of them, and scored well in the bonuses. He ran a huge road track in a bonus round that allowed him to score it close to twice.

The artwork works. The 6 cars are cute and look the part of hot rods. The terrain could use a bit more differentiation between the sand and the mud, and labels.

I love the decision making and risk taking in Hot Rod. I gambled that I would see at least one four in the round of five rolls. I did not. Luckily, I got one in the next round, but I was unable to score a bonus as I wanted to in the prior round and only got half points in the subsequent round. This is the real highlight and fun of Hot Rod. Do you try and get the two matching values to build the car? Or do you attempt the seven wedges? I started one car one way, and then switched. I wasted a few die faces. Maybe that is where I lost the game…. Nope. 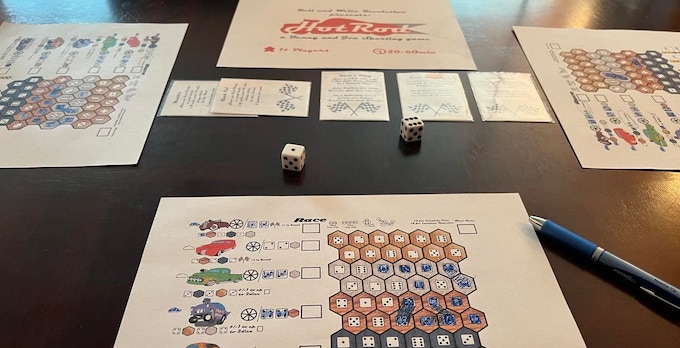 The rules are a bit of a mess, and the current playthrough video does not really cover the gameplay. The Son and I made our best guesses and stayed true to them for the whole game. I think we played it as intended, but there is a chance we did not. By the release, the rules should be more ironed out.

After initially fumbling through the start and the rules, The Son and I really got into and enjoyed Hot Rod. As I stated earlier, each of the games by the Sperlings is entertaining and worth the few dollars buy-in. Hot Rod is another roll and write that will be added to my ever-growing collection. It can also be played over video conferencing. Simply back this Kickstarter (and you should) and email the scoresheet to your friend. Then all you need is a pair of dice. Or, better yet, get your friend to back this Kickstarter, too!

After reading Adam’s review, if this sounds like a game for you at the time of this posting HotRod – a Roll and Write Revolution game
will be live on KICKSTARTER until Thu, March 31 2022 6:59 PM MDT, and has surpassed its funding goal of $100. Check it out and back it HERE.
Find out more at BGG.
Did you back it based on our review? Please comment below letting us know!

Check out HotRod – a Roll and Write Revolution game and Lagniappe Games on: