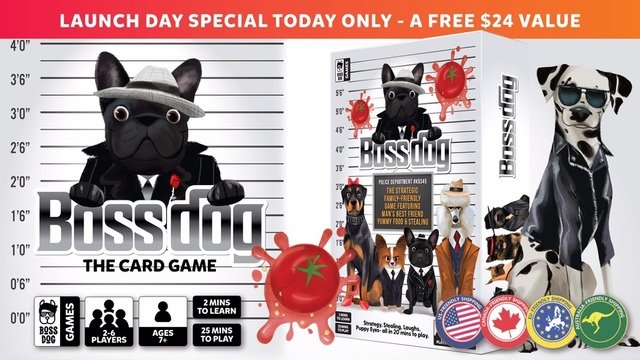 Find more info HERE!
From the Publisher:
Bossdog is a family-friendly card game published by Boss Dog Games. This wacky, fast-paced card game captures the essence of The Secret Life of Pets in a game format similar to Unstable Unicorns. Boss Dog Games is the company responsible for Farting Frenchies which was funded on Kickstarter in just 29 minutes and Beware of Bears.

Boss Dog is a family-friendly-dog-frenzie where players collect, feed and steal each other’s canine criminals to create the ultimate Boss Dog Family. Dominate your opponents and strategically heist their furry little friends as you battle it out for the top dog title.The game gets more intense with every card you play because the more dogs you recruit, the more there are to steal! Boss Dog will keep you laughing, is quick to learn, family friendly, and takes 15 to 25 minutes to play.

Disclaimer: The publisher provided the prototype copy of Boss Dog. The opinions expressed in the review are completely my own.

I was a big fan of the game from Boss Dog Games, Beware of Bears. I am a big fan of The Godfather trilogy. When Boss Dog Games reached out for a review of their newest game, Boss Dog, well, I had to say yes. It was an offer I couldn’t refuse. 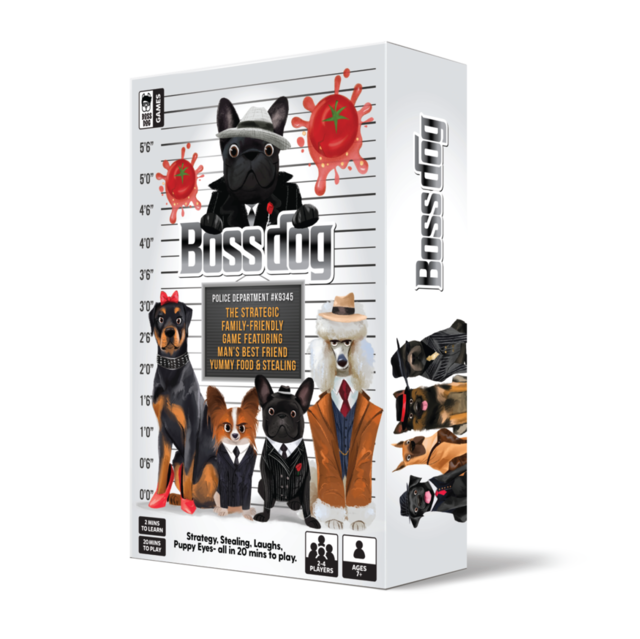 Every player gets a Boss Dog. This is the “don” of the family that each player is going to attempt to grow. For the first few games it is advised to just use these canines without the bonus power ups on the cards.

Separate the cards into their respective stacks of Dog Cards and Playing Cards. Find “The End” card and set it aside. Deal each player one Dog Card with a value of three. This is the first dog that each player is trying to get to join the family. Split the remaining Dog Cards roughly in half. Shuffle in “The End” card into one half. Then, place the other half on top.

Lastly, shuffle the Playing Cards (with the Boss Dog words on the back) and deal four to each player. You are ready to go.

This is a retheme basically of Boss Dog’s first game, Farting Frenchies. This time, they added the Boss Dog cards, which, if you are not using the power up side, are just there for show, but needed for the theme. You need to have a “don” in order to have a family. The artwork, Italian dishes, and the Fuhgettaboudit cards all enhance the theme of a Dogfather game. You are trying to impress your don with all the food you have collected and bring as an offer.

The mechanics are simple and fast-paced. Draw a card, play a card. Repeat. It works well. You have options on what card and how to play it. It keeps the game moving and light-hearted. 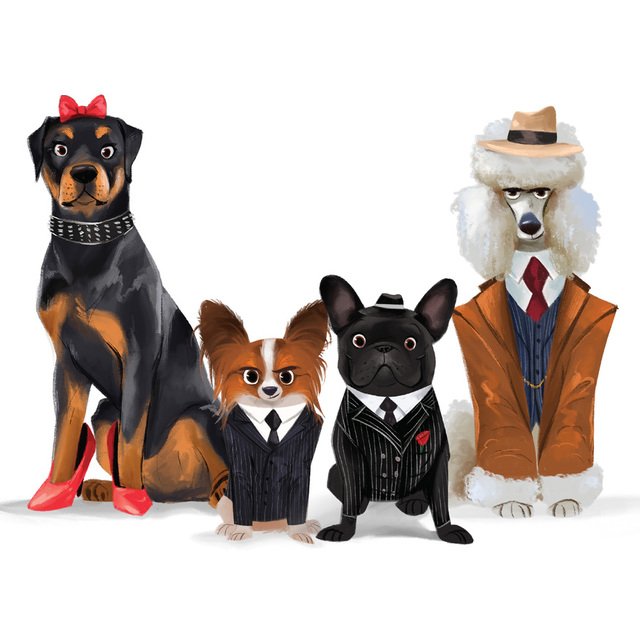 On a player’s turn, the player draws a Playing Card and then must play a card either on their dog, or their opponent’s dog. The options are: Play a food card on your dog, play a garbage card of matching color on your opponent’s dog, play a special card. Lastly, you can discard a card. If at the start of your turn, you do not like your cards, you can discard all four of your cards and draw four new ones. This is your whole turn, so, use this sparingly and wisely. At the end of your turn, you should always have four cards.

If you chose to play the card as a food card on your dog, and this is the last card needed to meet its value, you flip this card over and place it under your Boss Dog. Then take the top card off the Dog Card stack. If you chose to play a garbage card on your opponent, the card must match in border color. For example, you can play the red bordered Half-Eaten Anchovy Pizza on the red-bordered T-Bone Steak. This must be defused by another food card before the dog can be collected.

There are six different special cards. These can be played, and their action followed. The You’ve Been Hit card (which is a rotten tomato smashed on you) allows the active player to steal a food card from an opponent. The Dognapper allows the player to steal a collected dog and put them in your family. The Early Bird Special allows two food cards to be played. (Draw up a card to get back to 4) Take out the Garbage will clear your dog of all garbage cards currently on it. The Fuhgettaboudit card cancels any action being taken (except The End card). You can cancel an attack on you. You can cancel the placement of a food card by another player. You can even cancel an attack by an opponent on an opponent, if your families are allies.

If the dog taken off the top of the Dog Card exposes The End, the game ends immediately. UNLESS, the Cancel the End card is played. If this is played, then the game continues until the last dog is drawn.

When the game ends, the player with the most valuable family of dogs collected is deemed The Dogfather and everyone must kiss the ring. Okay, I added that last little bit.

I love the artwork by Amanda Naqvi. The theme of mobster dogs is present everywhere. The dogs have pinstripe suits, hats, gold chains, and names that all fit the gangster theme. Components are simply cards. They have a standard playing card feel, as their other games have. 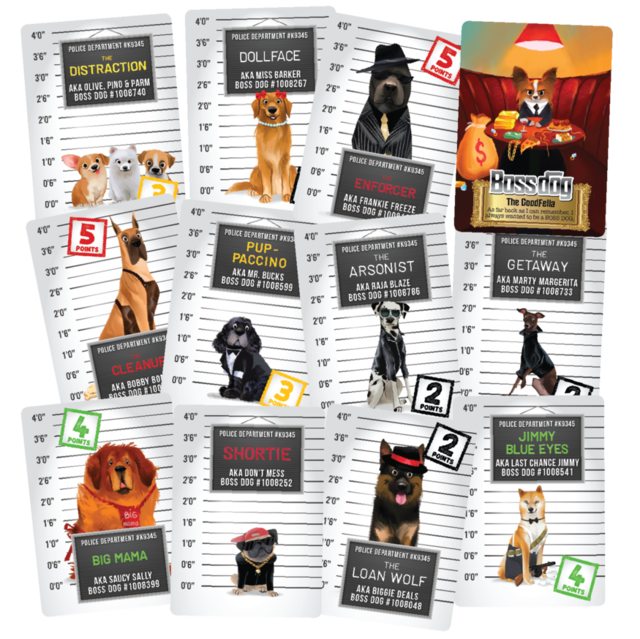 It is fast. It is easy. It is fun. I have said it before, and I will say it again. The theme is prevalent. It is everywhere. It bangs you over the head. But, in a good way. My son and I have loved playing this game. We got The Wife to play, too. She likes The Godfather vibe it puts out.

I know this game is a card game, but with only four Boss Dogs, it would be fun to maybe have them as a standee. Give them some presence. They are awesome and cute. But that gets lost when they are laying down. Each side could have the power up or standard options. Other than that, this game is pretty awesome.

If you don’t want to wake up to a head in your bed (a cat’s head? I don’t know.), I would advise this game. The artwork simply steals the show. The theme permeates the gameplay as you try to steal other dogs to be part of your family, you try to impress the Boss Dog/don in order to become part of the family, and you have to watch out for other families trying to sabotage you. Leave the gun and take Boss Dog.

After reading Adam’s review, if this sounds like a game for you at the time of this postingBoss Dog will be live on KICKSTARTER from Tomorrow ( Tue, March 15 2022 9:00 AM MST until Thur, April 14 2022 , and has a funding goal of $2,000. Check it out and back it HERE.
Find out more HERE.
Reminder that, Day one launch special is Free additional copy of the game for all rewards over $30
Did you back it based on our review? Please comment below letting us know!

Check out Boss Dog and Boss Dog Games on: