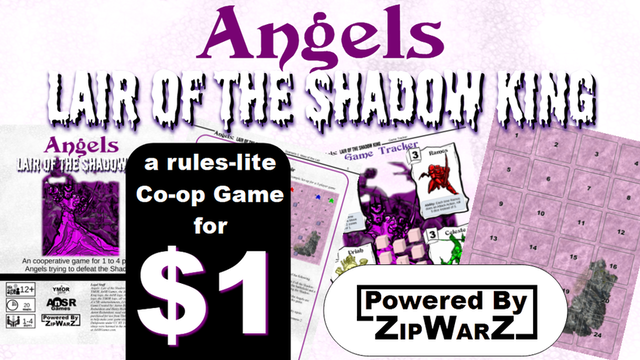 Angels: Lair of the Shadow King is a quick-playing, 1 -4 player game of a band of Angels looking to defeat the elusive Shadow King in his lair before the Shadow King’s Shadow-beasts can wreak havoc on the heavenly realms. This is a cooperative game, which means all the players win or lose together, and since it is quick to play and set-up, if you lose, reset and try again.

The game plays in less than 20 minutes per scenario, and requires minimal components that you already have:

Disclaimer: The publisher provided the prototype PDF/PNP Files of Angels: Lair of the Shadow King. The opinions expressed in the review are completely my own. 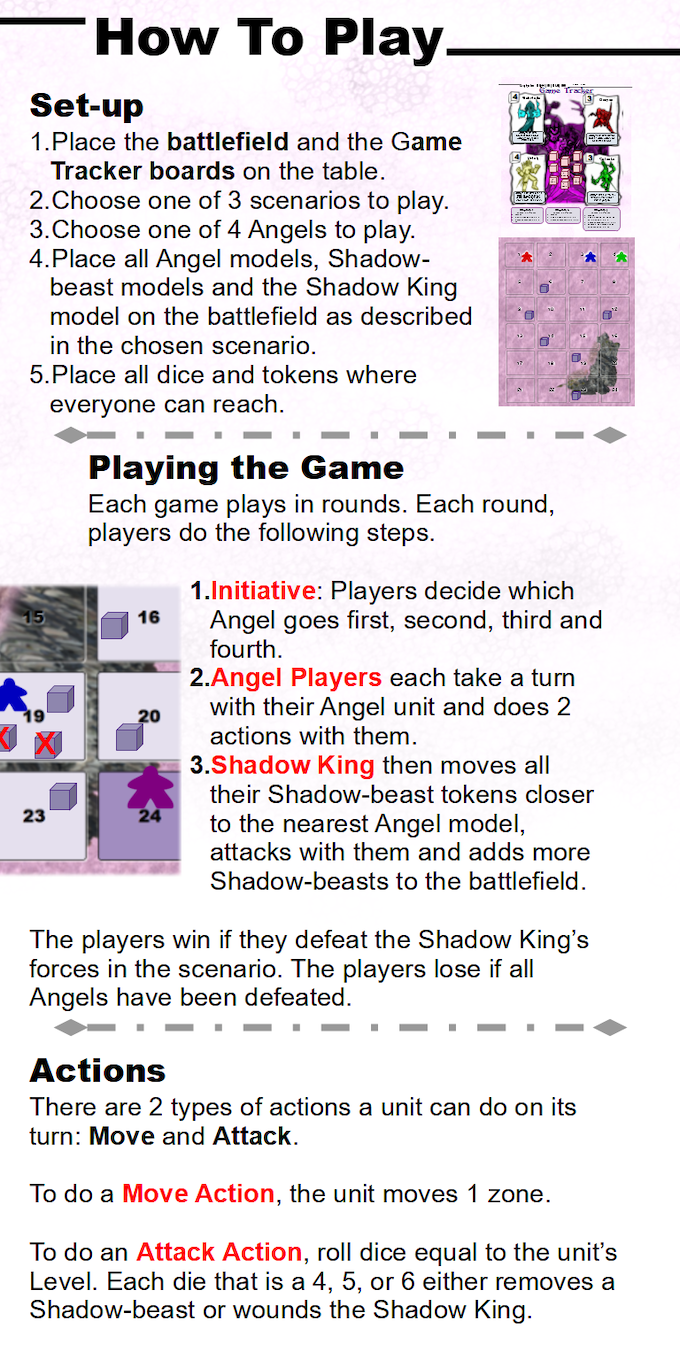 Angels: Lair of the Shadow King is the next title from AnSR in both the Zip Warz line and their YMOR games. Zip Warz is a ruleset they developed. YMOR stands for “Your Materials, Our Rules.” This basically means, for $1, you get a ruleset and everything game specific needed. You just need to supply miniatures/meeples/standees, dice, and cubes/discs/pennies. I played at home with the character standees from Candy Land. These two ideas by AnSR Entertainment make for fun, easy, and enjoyable games.

To set up, you will need to print off at least pages 9 and 10 or 11. Page nine is the Game Tracker. Pages 10 and 11 are the terrain for the game. It wouldn’t hurt to have all the pages handy, but those are the ones needed for play. When I played this, with the creator while waiting on our food at a restaurant over a lunch hour, he supplied acrylic meeples and cubes for the game. You could use any miniatures that you might have laying around your game room. You will need some cubes or discs or something to track health. Aaron also had different sized acrylic meeples.

As with other games from AnSR, the rules are well laid out.

The theme comes through in the narration of the scenario. Mechanically, it is simple. You make decisions, then the game AI undoes all your careful planning with your awful dice rolls.

Decide as a group, this is cooperative, the initiative order for this scenario. On a turn, the angel gets two actions. After each angel does their two actions, the Shadow King and his minions take their actions as instructed by the scenario rules. This repeats until either the Angels have met the end game requirements for the scenario, or the Shadow King and his Shadow-beasts have met theirs or defeated all the Angels.

Actions that can be taken by the Angels are Move, Attack, and/or Use Special Ability. When moving, Angels move orthogonally 1 space per action. If the Angel enters a zone with an enemy, the Angel must stop. To attack, the Angel must be in the same zone as enemy unit. The player then rolls the amount of dice equal to its max health/level (the number in the upper left of the Angel’s description). For each 4,5, or 6, remove one Shadow-beast from the zone. Lastly, each Angel  has a special ability that can be used for an advantage. Celeste can heal one wound from any Angel. Ramos always attacks with 5 dice instead of the 3 health he has. Uriah only takes damage when enemies roll a 1 or 2. Gabrielle can move 2 spaces as opposed to the standard 1.

Once all the Angels have acted, it is time for the Shadow King to respond. Each Shadow-beast moves one space toward the closest Angel. If there is a tie, the players decide. Then, each Angel rolls a die. For each 4,5, or 6, a new reinforcement Shadow-beast enters the game in that scenario’s designated zone. Next, any Shadow-beast in a zone with an Angel attack. One die is rolled per enemy. They hit on a 4,5 or 6, and a wound token is added to that Angel on the Game Tracker. Lastly, if you are in the 3rd and final scenario, the Shadow King himself will attack. This is 4 dice per Angel in his zone. To defeat him, he must take 5 wounds plus the number of Angels playing.

The artwork is standard for AnSR Entertainment’s ZipWarz line. The characters look great, and the terrain sheets are well laid out. Component wise, well, this is a print and play. I played with Aaron on a laminated terrain sheet with a laminated Game Tracker. The components are what you bring to the table. You can purchase simple acrylic meeples of different sizes and colors with associated cubes off The Game Crafter as Aaron had when we played.

This is a cheap print and play game. For $1, you get this great game. With a solo option, you can play on your own lunch hour at your desk. With its ease of gameplay, you can teach the person next to you. Since it plays up to 4 players, teach the person on each side of you. It does have a solo mode in case you don’t want to share your new games with your friends and coworkers. But, come on, be nice!

I have a lot of games by AnSR Entertainment. Their game CH35S utilized a simple way to make standees using the art from the game. I wish that was the case with this one as well. I think that would enhance the feeling a little bringing the artwork into the gameplay. But I can appreciate the YMOR aspect of the cubes and meeples.

As I have stated, we played this game while waiting on our food at lunch one afternoon. It is a small footprint and easily fit on the restaurant table. Each scenario gets progressively harder. I was a little overconfident after the first scenario. By the time we reached the third scenario, it was quite the battle. Luckily, we won!

Cooperative games, print and play games, spending less for more, games that can be played at lunch

For more games that can be played at lunch check out Adam’s podcast, Eat Lunch and Board Game, where he reviews games on their merits include their ability to be played over a lunch hour.

After reading Adam’s review, if this sounds like a game for you at the time of this postingAngels: Lair of the Shadow King will be live on KICKSTARTER until Mon, March 7 2022 4:38 AM MST, and has surpassed it’s funding goal of $20. Check it out and back it HERE.
Find out more HERE.
Did you back it based on our review? Please comment below letting us know!

Check out Angels: Lair of the Shadow King and AnSR Games on: