Overview:
I am always on the prowl for a new 2-player game. Most of my gaming of late has been with just my son. While he might be only 9, he plays at a much higher level. I think it might have something to do with his father…

When 5 Paths came across my attention, I was instantly drawn to it. It was designed for 2, and only 2, players. It looks like checkers, only on a higher level and in a good way. And it checked off another important box, it has a short playtime.

To set up, put the board between you and your opponent. Each player takes a set of 10 units, either black or white. These units are two sets of five. Each player has the same units. Each matching unit has the same movement and capture ability.

I do not really know what the theme is. A futuristic world? A dystopian future? Tron? The characters drawn to represent the units are a little pointless to the overall theme and feel of the game. The mechanics make up for it. It is a combination of checkers and chess. Each of the 5 different units moves in a different path. There are multiple ways to capture your opponent’s pieces. The mechanic of “I go, you go” is nothing new, but it fits this game perfectly.

The gameplay for 5 Paths, while simple on the surface, has great depth. Each player selects 5 units to place on the deployment zones on their side of the board. This is where great strategy comes in. You can select any combination of 5 units. You can pick one of each, seems balanced, but you quickly learn that it is not the best strategy. You can select two of one type with three others. The more games you play, the more strategy and ideas you will have and want to try and test.

At the start of a turn, the active player must declare which unit they are going to move prior to rolling both dice. So, be confident and hope for a good roll for that unit. You cannot change your mind after rolling. When a unit starts it’s movement, called momentum, it cannot change directions unless it hits a wall, and it must move the entirety of the roll; unless the unit can utilize a special ability.

The five units are The Canto, The Flash, The Arc, The Torrent, and the Gale. The Canto moves based off one of the dice. To capture, the Canto must drag a stunned piece on top of another piece. The piece that is dragged is left behind, and the piece hit by the dragged on is captured. The Canto has three special abilities, more than any other piece. Yet, it is not overpowered at all. Stun means the affected piece cannot be declared. The Canto can Ricochet, treating enemy pieces as corners.

The Flash does not roll the dice. It always has a movement of 3. It captures if it can land on an opponent. It can end its movement early to capture. Its special ability is Daze. If an enemy moves within two nodes in a straight line from the Flash, it must stop and roll against the Flash. Higher number wins. If it is the Flash, the player moves the losing piece the number of nodes on the losing die. If the Flash loses, the piece continues its movement. A tie results in the piece stopping its movement and losing the rest of its turn.

The Arc moves based on one die and uses the other as its distance of attack. To capture, after the movement is over, if a piece is in line of sight of the Arc within the distance of the second die, it is captured. Like with the Canto, the Arc can Ricochet off enemy units.

The Torrent moves based on one die value. It captures by landing on an opponent. Special Abilities are Slide, which allows the Torrent to go over the blue diamonds on the board as if there is a path, and Surge, if Torrent captures an enemy unit, it must move the distance on the second die. During the surge, the capture unit acts as a corner.

Lastly, the Gale moves based on the sum of the die roll and captures by landing on a unit. Its special ability is Perch. There are black hexagons with green nodes on them. The Gale can treat these “rooftops” as corners. If it ends its movement on a green node, it cannot be captured by any other unit, and is immune to any other special ability.

If a player captures a unit on their turn, they can deploy a new unit. However, no player is allowed to have more than five units on the board. If you have a unit on a deployment zone, it must be moved before you can move one on the board.

The art by Kenny Kong looks good, but it does little to help with the pasted-on theme. The components would be just as effective as their symbols with no human counterpart. The board, on the other hand, looks amazing. Around the edge of the playing area, the movement rules are printed for reference. Also on the edge is the infirmary, where captured units are placed. It acts like a score track. Once a unit is captured, there is no way to get it back. The “score” is right there for all to see.

The components of the prototype are great. The board is a nice thick quad fold chipboard. The units are very thick wooden discs with a sticker on them. They are nice quality. The two D6 are just standard dice. I like the different colors, as it makes using them easier with some unit types. 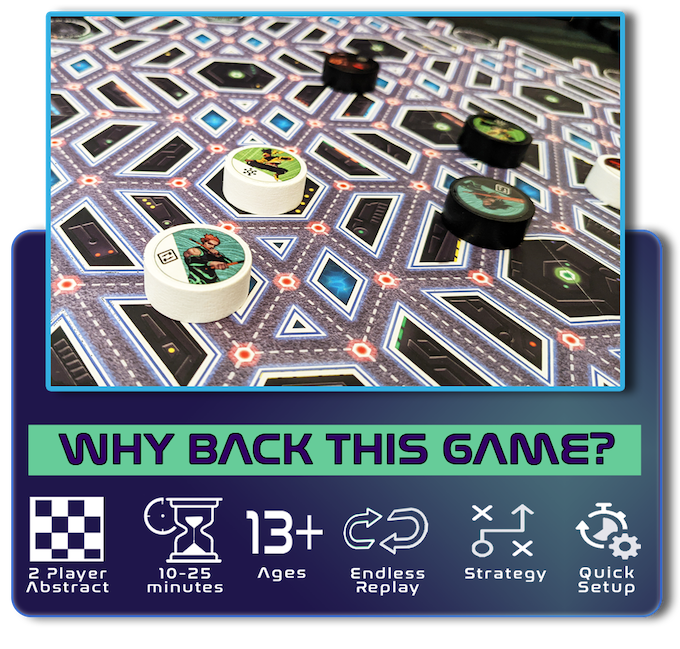 The variable start offers a huge amount of decision making and replayability. I loved it. The first game, The Son and I both just started with 1 of each type of unit. We quickly realized that was not a great strategy. Working combinations of units and coordinated attacks worked best. Sometimes, sacrificing a unit to bring in a different one might be your best path. Sometimes, well, it isn’t. It is the decision making and crafty planning and outside the box thinking that will lead you to victory.

While I love the simplicity of the pieces, I would have liked the pieces to standout a little better from one another. There are only five, so it wouldn’t be hard for one to be a square, a triangle, a hexagon, a diamond, and a circle. Each type of unit has a unique symbol, but to further the differentiation, a different piece shape would help. The stickers put more focus on the characters than the icons. You have to look closely to see what they are.

While I thought this game was more like checkers, and I would have a chance at beating The Son who dominates me in chess-like games, I was wrong. I enjoyed 5 Paths immensely and suffered defeat each time at the hands of The Son. The thinking and planning ahead lends itself perfectly to the chess-brained little kid. The replayability is fantastic! Couple that with the short play time, you have a game that you can just keep right on playing, game after game after game.

Want to win a copy of 5 Paths? ENTER HERE!

After reading Adam’s review, if this sounds like a game for you at the time of this posting5 Paths: a Tactical Brawl, will be live on KICKSTARTER untilThu, March 31 2022 10:00 AM MST, and has a funding goal of $12,000. check it out and back it HERE.
Find out more HERE.
Did you back it based on our review? Please comment below letting us know!

Check out 5 Paths: a Tactical Brawl and Loamlight Entertainment on: