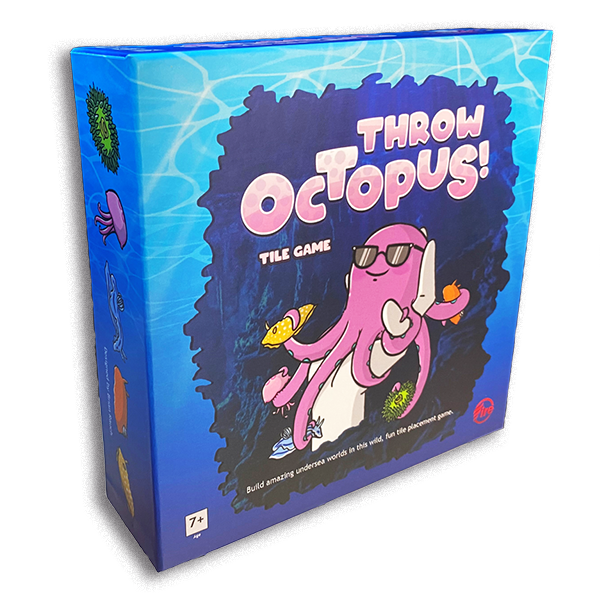 Welcome to the undersea world of the tropical reef with colorful sea creatures and cunning octopuses who wear shades. Throw Octopus! Tile Game is a new and innovative tile/puzzle placement game for 1-5 players that allows you to use clever strategies to place tiles in a growing seascape of colorful creatures.  Be the first to play all your tiles and win the game. Or play 2 player Octopus Duel for a head to head battle of wits and speed!

Disclaimer: The publisher provided the prototype copy of Throw Octopus. The opinions expressed in the review are completely my own. 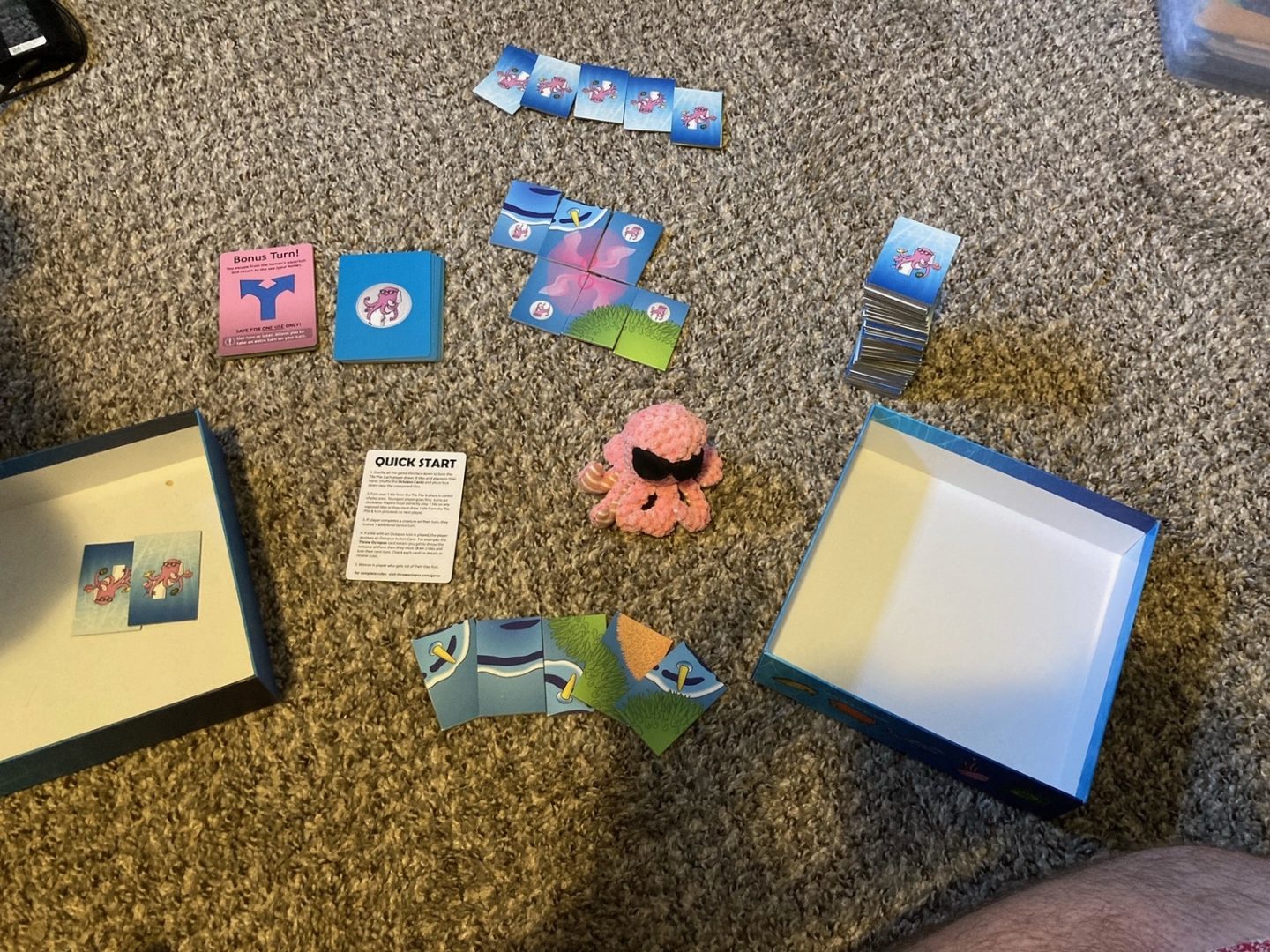 We have really enjoyed testing this game.  It is an undersea domino montage builder that feels a little like Carcasone and scores like uno.  The point of the game is to play out all of your tiles in valid play positions.
Certain tiles will have octopi on them and lead to drawing actions cards, which generally tend toward being helpful, but do have a few clunkers included for a mixed bag. 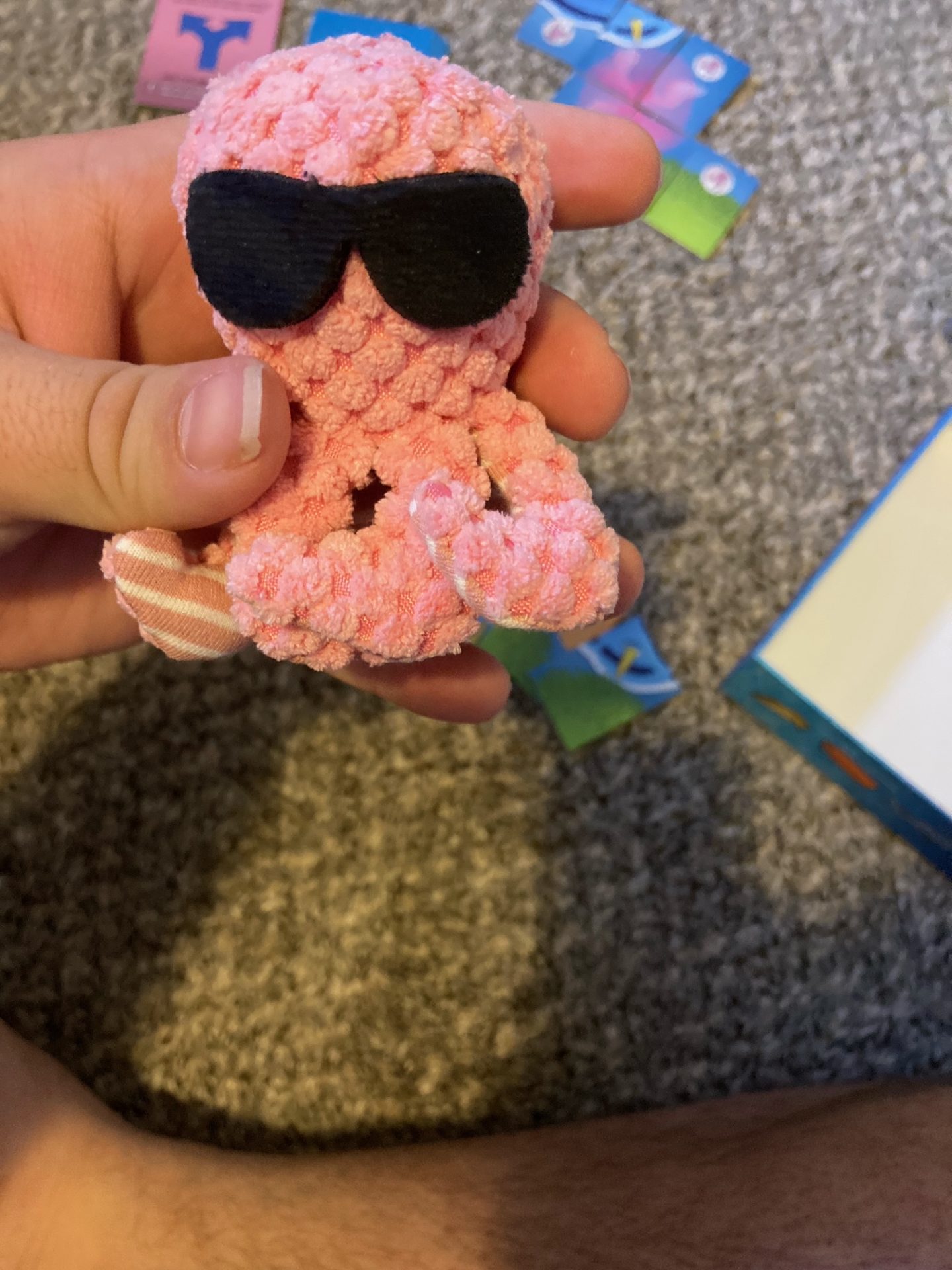 These tiles are really pretty and the baby octopus knitted plushie is adorable.  We played several games with groups ranging in size from 2 to 5 and it was fun each time.  We also have had young kids play effectively, while it was still fun with a group of all adults.  There is enough mind bending puzzle craft in getting the pieces to fit together in the
correct order and direction to keep most people engaged for 2-3 games at a time and games tend to play out in the 20-30 min that the box promises or sometimes even less. 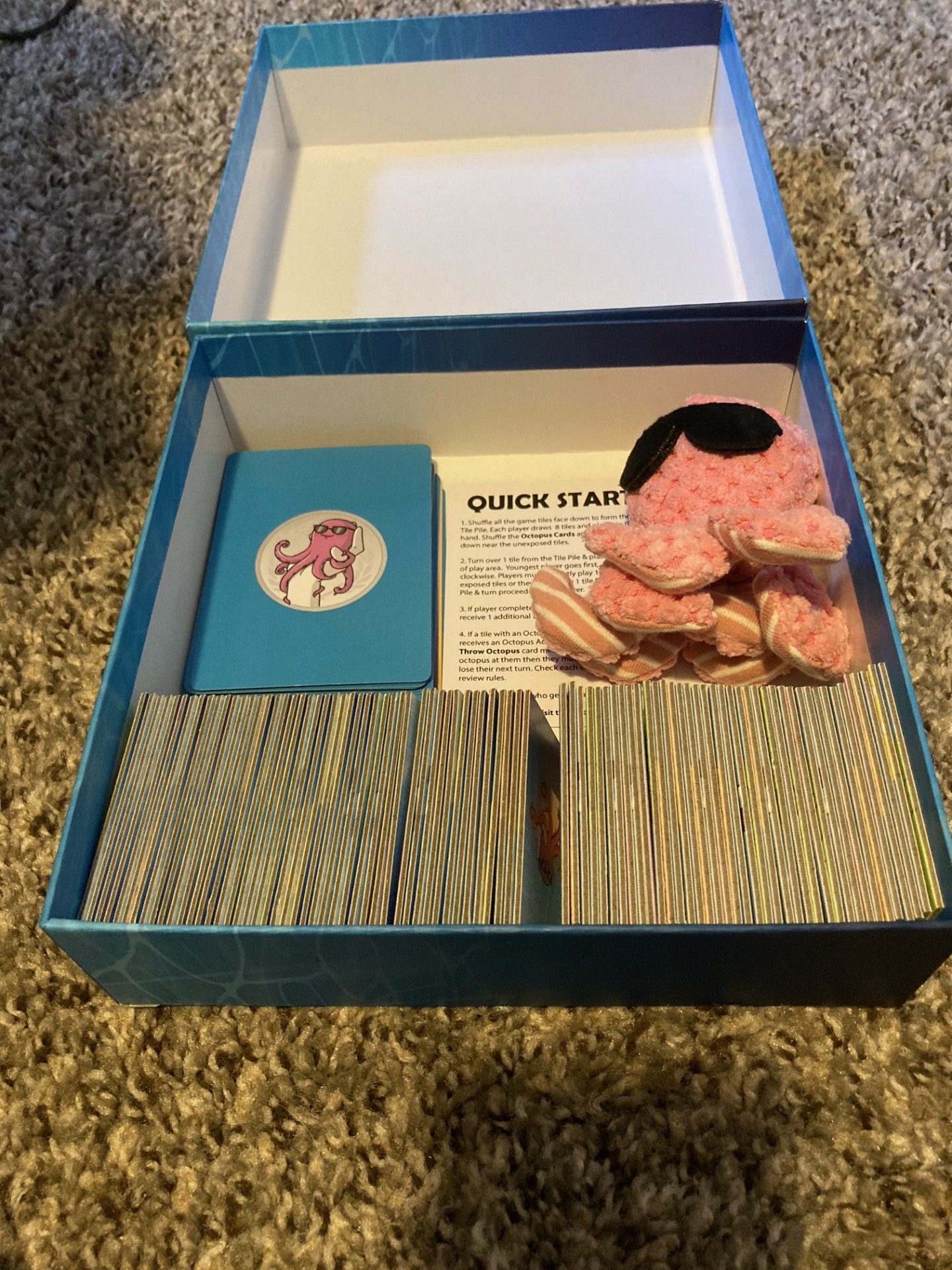 This is likely not going to be the table favorite, as it is a simple game, but it is a definite contender for a great filler while waiting for other games to wrap up at a gamenight, or a gateway game for people used to simpler games like dominoes or majong.
We have dozens of games in our personal collection and even after finishing testing this our son requests it about 1/3 of the time he picks a game.  We will proudly support the campaign if they have a retailer pledge tier as this is a game we would be proud to stock.  100% family friendly, 8/10 on fun and 8/10 for replayability.  Overall I would give this a solid 9/10 as a filler game, overall, and even a 7/10 as a standalone game at a gamenight. 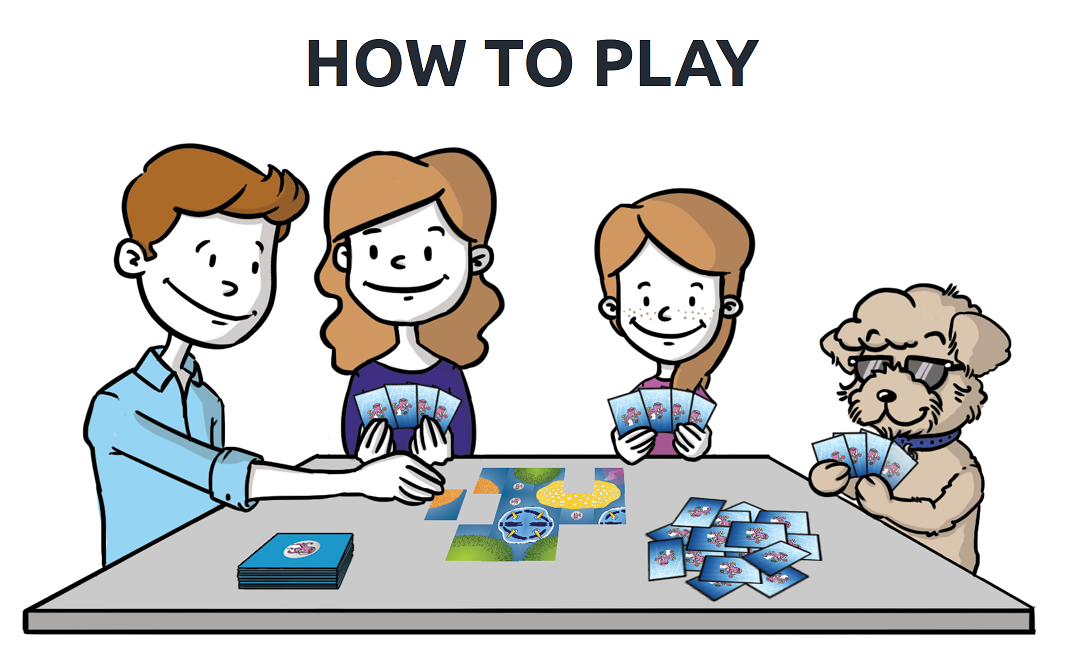 Each player starts with 8 tiles. When it’s your turn, play 1 of your tiles properly (creature parts must fit perfectly) on the growing seascape!

Play a tile with an Octopus Icon and you get to draw an Octopus Action Card!

Each of these Action Cards (8 types of cards) has a power that can help you in the game, or cause you to draw more tiles (Stinky Inky Card). 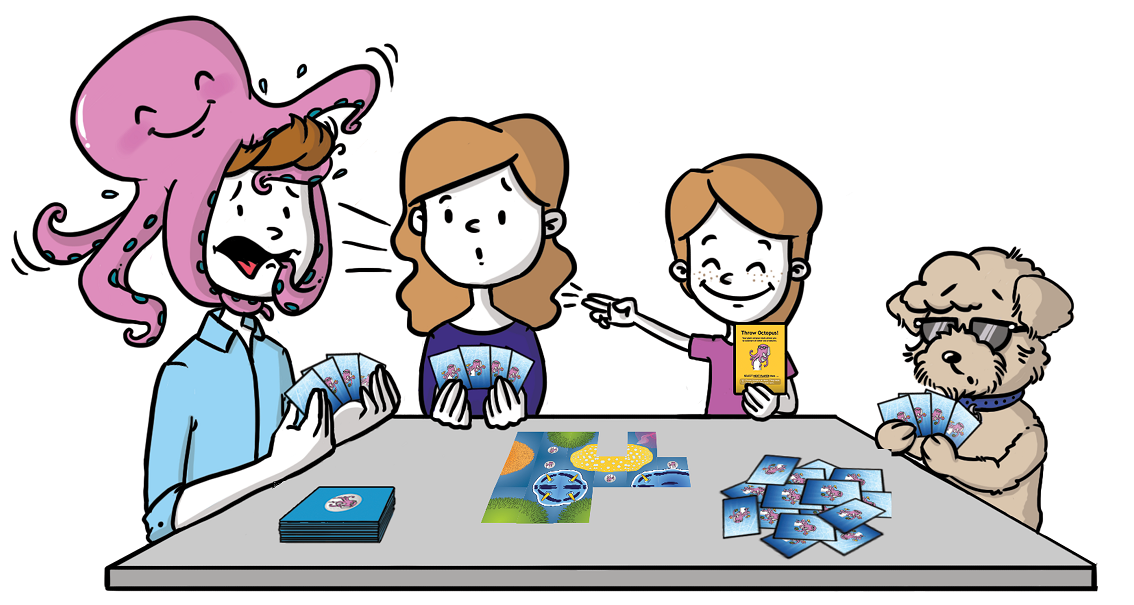 When you draw the Throw Octopus! Card you’ll get to select any player at the table. Throw the included Baby Throw Octopus Plushie at them, then they have to draw 2 tiles from the tile pile and they lose their next turn. Ouch! 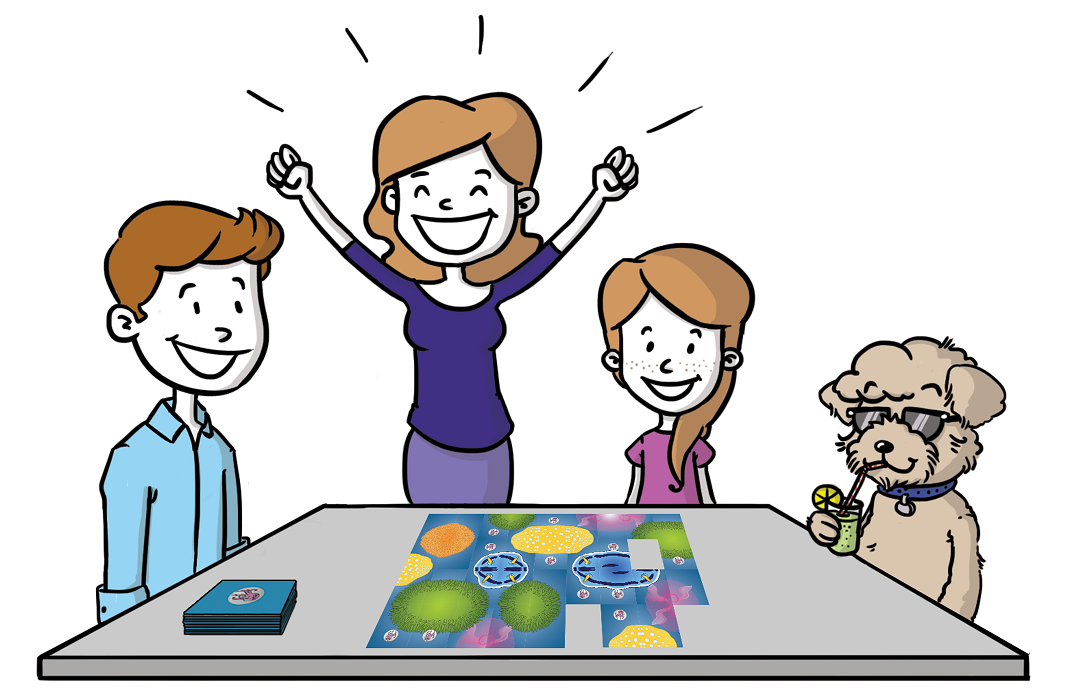 Be the first player to play all your tiles and win the game! Takes about 20 minutes to play!

After reading The Arcanist’s Armory LLC’s review, if this sounds like a game for you at the time of this posting Throw Octopus will be launching to KICKSTARTER around the 22nd of March 2022 make sure you go fill out this form to get notified when they launch HERE.
Find out more at HERE.
Did you back it based on our review? Please comment below letting us know!

Check out Throw Octopus and FireStorm Labs on: