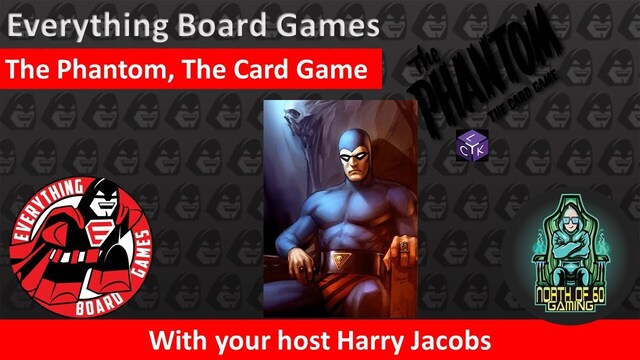 Quick Look: The Phantom: The Card Game – Terror in Mawitaan

The terrorist Chatu “The Python” is back in Bangalla and only you can stop him from harming innocent bystanders.
based on Tony DePauls first Sunday story, published in newspaper between April 6th and September 28th of 2003 and was drawn by Graham Nolan.

Terror in Mawitaan includes a new Adventure with rewards, the keyword Tough and the concept of Side-Missions, new Foes and new Allies.

Disclaimer: The publisher provided the prototype copy of The Phantom: The Card Game – Terror in Mawitaan. The opinions expressed in the review are completely my own.

Harry of @North of 60 Gaming “Fall is upon me here in the north, and what better way to enjoy it then making video’s for you. Here is the Phantom Card Game, I will take you through the unboxing, setup and a playthrough of the new expansion, “Terror in Mawitaan”. So sit back and enjoy all the special treats that are in the video.

After watching Harry’s review, if this looks like a game for you at the time of this posting The Phantom: The Card Game – Terror in Mawitaan is available for LATE PLEDGES on GAMEFOUND. Check it out and late pledge HERE.
Find out more at BGG.
Did you back it based on our review? Please comment below letting us know!

Check out The Phantom: The Card Game – Terror in Mawitaan and Games by Lyck on: