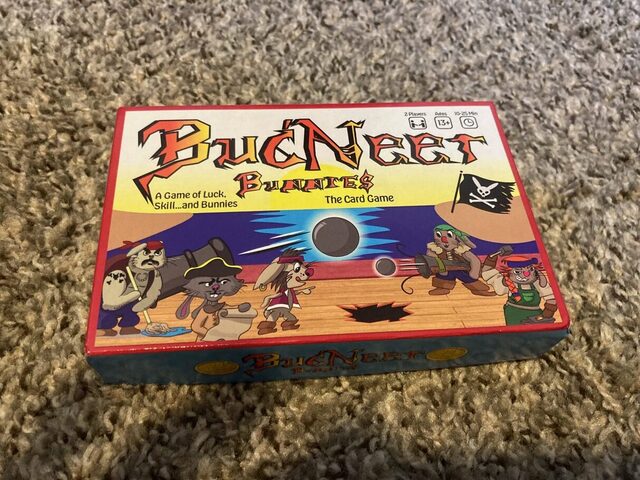 Buc’neer Bunnies is a 2 player table top card game where you control a crew of rascal bunnies and attack your opponent with cannons. Crew members have many different abilities that allow you to control the gameplay as you go. First to destroy the ship or collect 10 treasure is the winner!

Disclaimer: The publisher provided the prototype copy of Buc’neer Bunnies: The Card Game. The opinions expressed in the review are completely my own. 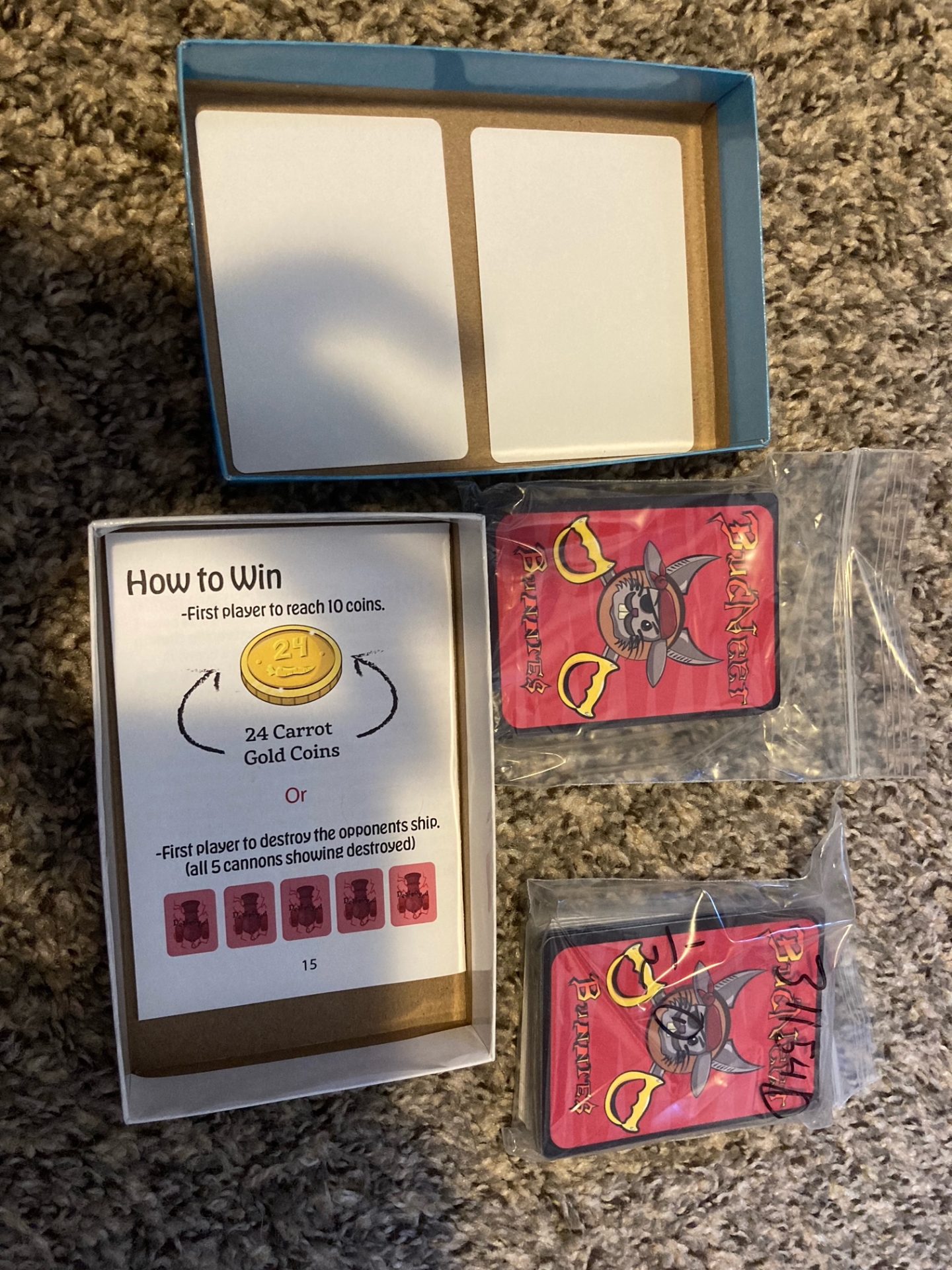 We played Buc’neer Bunnies over the holidays at a family reunion. It only supports 2 players but it does its job well. You take command of a 5 gun pirate ship and win in one of two ways, 1) collect 10 gold coins (receiving one for each cannon or crew you destroy) OR 2) destroy all 5 cannons at once on the other ship. Each turn, a player may fix all of their cannons, but fixing cannons makes them targets to be gunned down again.

To add to the complexity, different crew can shoot different places both cannons and or crew on the other ship, and once revealed your opponent knows where your guns are pointed. There are stronger units, captains, but they are limited to one per ship so you need to be more careful with them and use them at the right times. This game is a little more complicated so probably most appropriate for older kids to adults. I played successfully with my 6 year old, but it drags on more and may need to be decided on a case by case basis.

That said, the art is fun, the pirate name jokes are fun, and kids enjoyed lining up to cheer from the sidelines for their favorite crew.

This is a great standalone game for people that will play 2 player games often. It has a good dose of strategy, timing, and luck. I would happily stock this at our store if they have a retailer bundle and I give it a 9/10 for families with older kids and 9/10 for replayability with all the different crew combinations. The only thing keeping it from a 10/10 is that you can play 2 cards per turn and only draw 1 so the game tends to start action packed and slow down a lot in the mid to late game, but even with that it is fun and a definite thumbs up recommendation. 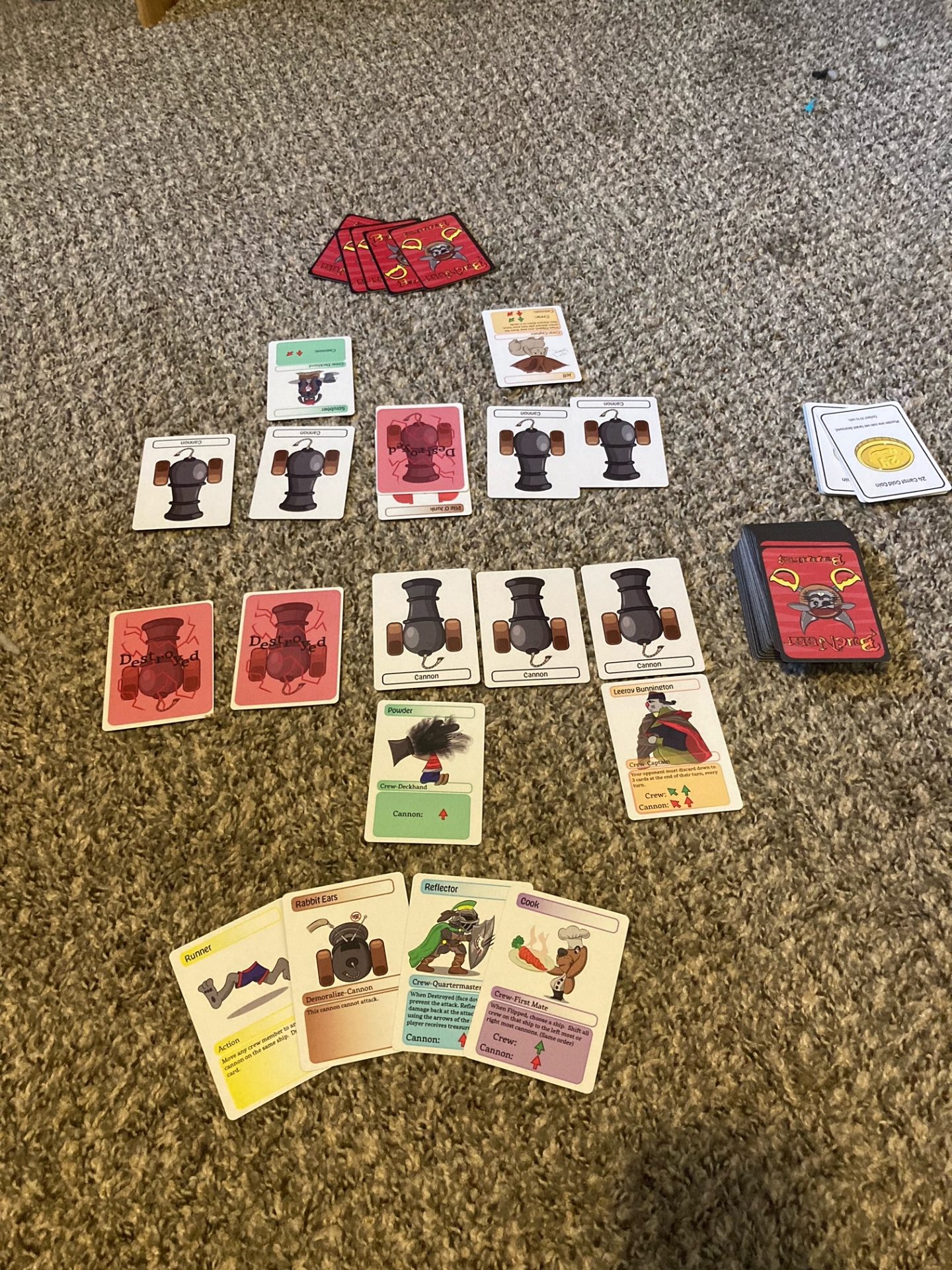 After reading The Arcanist’s Armory’s review, if this sounds like a game for you at the time of this posting Buc’neer Bunnies: The Card Game will be live on KICKSTARTER starting Tue, February 1 2022. Check it out and make sure you click the button to be notified upon launch HERE.
Find out more at HERE.
Did you back it based on our review? Please comment below letting us know!

Check out Buc’neer Bunnies: The Card Game and 4Shadow Games on: