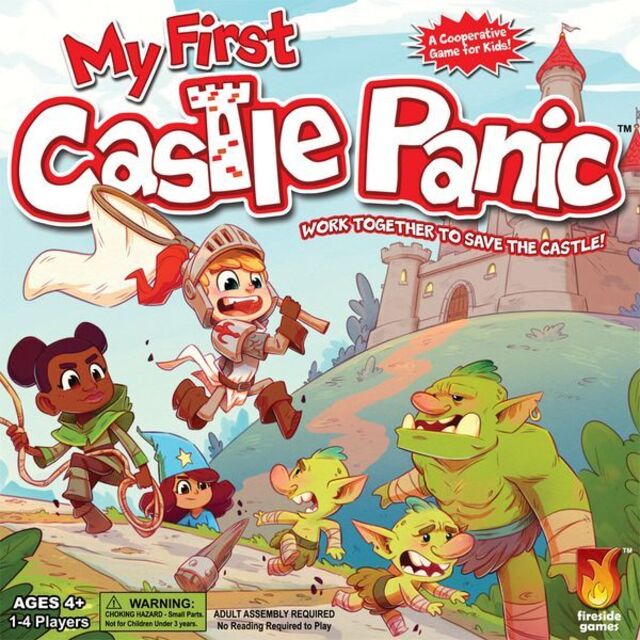 All images courtesy of the My First Castle Panic BoardGameGeek.com page.

My First Castle Panic, like its predecessor Castle Panic, is a co-operative game in which players work together to defend their castle, but this game removes the reading requirement of the earlier one and fosters the development of educational skills, such as identifying colors and shapes, problem solving, and turn taking.

In the game, monsters follow a single path toward a single, large, eye-catching castle, which is protected by one wall. Each step toward the castle is identified by a color and a shape. Players hold cards in their hands with cute defenders who also have a color and shape. When a card is played that matches the location of the monster, that monster is captured and thrown in the dungeon. Tension builds as more monsters are placed and move along the path toward the castle. If the castle is destroyed, the players lose; if it still stands when all the monsters are in the dungeon, the players win.

Disclaimer: The publisher provided the copy of My First Castle Panic.. The opinions expressed in the review are completely my own. 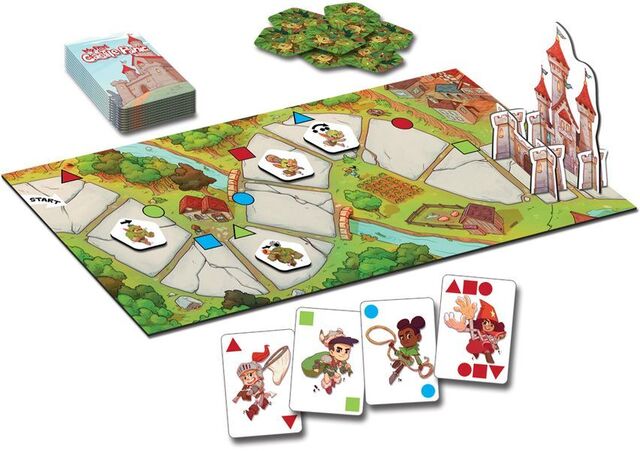 My love for Justin DeWitt’s Castle Panic runs deep. I have all the expansions and promos for Fireside Game’s evergreen classic. The Son and I have played many games of various difficulty. So, when My First Castle Panic came out, I was not initially interested. The Son was too old for it. But now, I have The Daughter. She is three, and she really wants to play games with us. As you can guess, she is just not ready for most games. My First Castle Panic came back into my line of sight, and I figured now was the time to get it. I am so grateful that I did not pick it up when it first debuted in 2019. It would not have made the impact that it has now. If you have a little gamer in your life, My First Castle Panic is a must have in your collection.

The setup for My First Castle Panic is very simple. Set the board in the middle of the table. Find the three monster tokens with a star on them and place them in the first three spaces on left side of the board. Shuffle and deal one card to each player. Place the remaining monster tokens in a pile or draw bag. Youngest player goes first.

The rules are just as simple. The active player draws the top card of the deck then may either play one of their cards that matches the color and shape of one of the spaces occupied by a monster, or they can ask someone else to play their card that matches. If a card can be played, the monster is dispatched to the dungeon, which is the bottom of the box.

The theme and mechanics practically match the Castle Panic game. There are monsters coming in from the woods bent on destroying your castle. You must work together to defeat the monsters and send them to the dungeon (the bottom of the box).

Players take turns playing as I mentioned above. Some special cards and monsters appear in the game.

A card might also depict a booting kicking a monster. This card dispatches any monster on the board back to the draw pile. A wall building card allows a player to rebuild the wall, protecting the castle.

If at any time, a monster hits the wall, the monster is captured and sent to the dungeon, but he has destroyed the wall, and it is also removed from the game. If the wall is gone and a new monster runs into the castle, well, the castle is destroyed, and the players lose the game. However, through teamwork and cooperation, if all 16 monsters are dispatched to the dungeon, the castle is safe, and everyone wins!

Being a children’s game, the artwork by Can Kendall fits the bill. The Daughter loves the little monsters, though she is concerned why the runner monster has a band-aid on its head. Component-wise, all the tokens, castle, wall, and board are made from a nice thick chipboard which will hold up to a lot of playing. Which is great because it is going to see some table time in my house. The cards are larger than the base game and nicely designed to show the color and shape as well as having a hero on it. 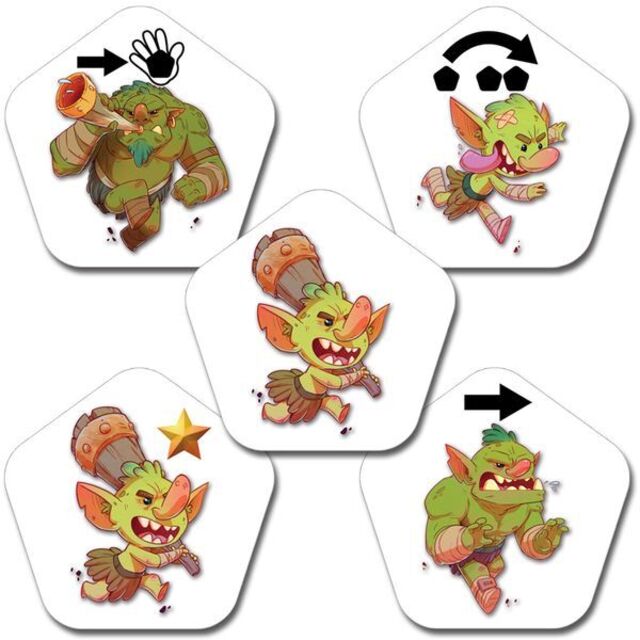 My First Castle Panic teaches young gamers three shapes, three colors, how to match, how to ask for help, and how to take turns. These lessons are all fundamental to life. My daughter, who just turned three, loves this game. She now refers to it as her game. She will take it off the shelf and start setting it up on her own. She knows that she needs me to shuffle the cards, but other than that, she does it all. She asks her brother, mother, and me to join her. All of this is “The Good,” and on top of it all, it is a genuine joy to play with youngsters.

We have played this game many times, and we win about 66% of the time. I think it is simply great that the game does win a good percentage of the time. This allows youngsters to learn that even trying hard can still result in a loss. The Daughter still has fun playing, but she accepts that she won’t always win.

My only real problem with My First Castle Panic is that it is so short. I wish that it was a double-sided board with a slightly longer track for when The Daughter gets a little older. And maybe, Justin DeWitt can come up with a fun expansion or add-on for the game. Who knows? The game is perfect as it is, for who it is intended for.

I will always be grateful for this game as The Daughter refers to it as “her game.” She will go get it out and start to set it up. It has already given us a lot of enjoyment, and I look forward to more fun times with her. The Son loves to play it with us, too. It has become a great time for me and the kids. I must keep reminding him that she is not quite ready for Castle Panic, and let’s just keep playing My First Castle Panic with her for now. Watching her pick up the defeated monsters and throwing them in dungeon while saying, “Into the dungeon!” will never get old. She will get old, but this memory will not. I urge you to get this game for your children, nieces, nephews, grandchildren, or any child that you spend time with. You will not regret it.

Playing games with their children, Parents who want to move on from Candy Land

After reading Adam’s review, if this sounds like a game for you at the time of this posting My First Castle Panic is available for purchase go check it out and get it HERE.
Find out more at BGG.
Did you get it based on our review? Please comment below letting us know!

Check out Stringamajig and Fireside Games on: