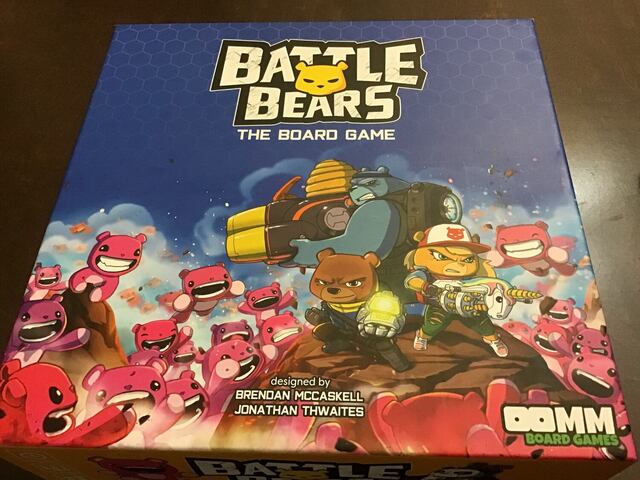 Based off the Mobile game Battle Bears!

Have you and up to 5 friends ever crash landed on a hostile planet pursued by a horde of explosive zombie teddy bears and only enough supplies remaining for one of you to make it back off the planet? Have you had to Fight to the Death using your own unique abilities, and with the random weapons and equipment you can find to be the Last One Standing? After dying, have you then come back as a cute zombie teddy bear and attempted to revenge kill your opponents?

Oh, you haven’t? Well why not? It’s about time you had the experience. BattleBears is coming to your tabletop!

In Battle Bears: The Board Game the goal is to be the last bear standing! Each player takes two actions on their turn. You can shoot, run around picking up items, use a piece of gear or your special ability! At the end of your turn place a huggable swarm to try and trap your enemies. If you die, don’t worry – death isn’t the end! You come back as an even stronger, ultimate huggable set on taking revenge on the ones who destroyed you.

Disclaimer: The publisher provided the copy of  Battle Bears. The opinions expressed in the review are completely my own. 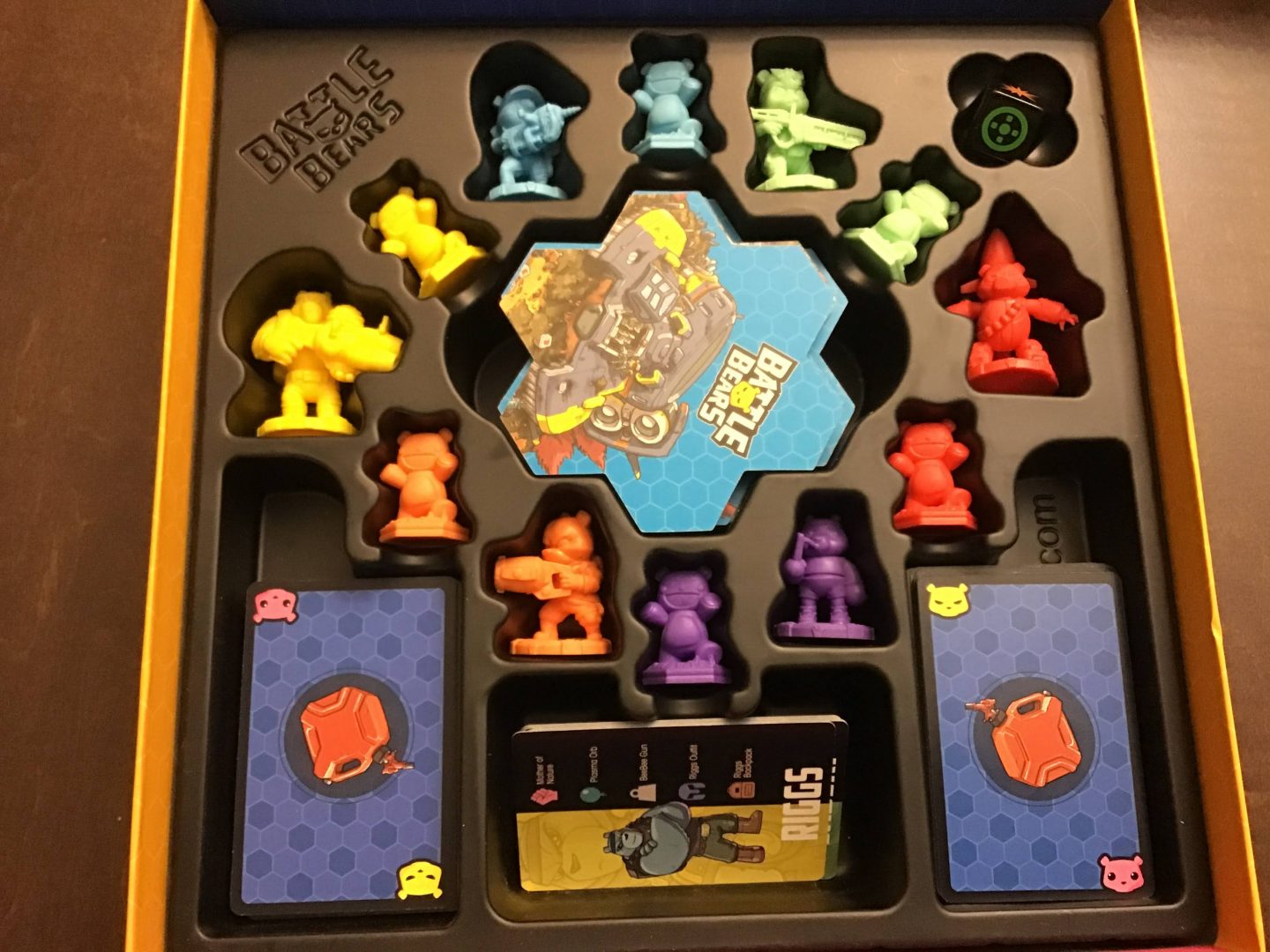 I must be honest that I have had a complimentary copy of Battle Bears by OOMM Games in my possession for quite a few months now. If you were to ask me why it has taken me so long to get to this game, it would be a partial truth to say that I was asked to review a good many Kickstarter Games that usually require prioritization, and given that Battle Bears had already been out for quite some time , it was “necessary” to push to the back of the line as a result.

However, that was not the only force working against my playing and taking the game for a test drive. With today’s review, I am finding myself in the difficult position of trying to determine if I should allow a few personal pet-peeves of mine to influence the final score of my verdict, because as you will soon learn, I did initially find some issues that I found a bit off-putting when opening the game and trying to learn it.

So let’s cut straight to the chase : There were a few glaring omissions in the rule book (such as where to place your character when starting the game!) that were oddly coupled with a kindly worded paper note that instructed gamers to check out online for more information, Errata and FAQ for Battle Bears, promising that the rules would be a “living document” and updated consequently.

That was back in summer of 2021. When I looked back then, there were no FAQ , rules clarifications on their website, and nor were there any on BGG. I did finally manage to write them and ask what was going on with a few rules, and got the answers I was looking for, but even now in November, I see that there have been no updates to BGG or their main website.

So for many months I probably wasn’t in the best mindset to give this game a thorough review. And after checking their Battle Bears website and BGG today and still seeing no sign of the aforementioned “Living rule set” or errata for some of these basic omissions , it is hard for me to bite my tongue and be objective in a certain sense.

But when viewed properly and with a clear mindset, and played with the rules-as-intended (obviously not Rules-as-written) Battle Bears is a great game.

This is an all-out brawl for survival where only one bear can win. After crash landing in a middle of a forest filled with explosive, zombie-like teddy bears that want to hug you to death, you also discover that there are only enough supplies for one bear—which of course, must be you!

The game itself is wonderfully crafted and saturated with detail. The miniatures representing each of the 6 selectable characters are gorgeous, big, and dangerously cute while armed-to-the-teeth while sporting all sorts of high-caliber weapons. The art is sensational, and the many tiles that come to represent the terrain are beyond fitting. It even comes with a really nice comic book detailing the story and a secondary means of learning the game instructions, too. 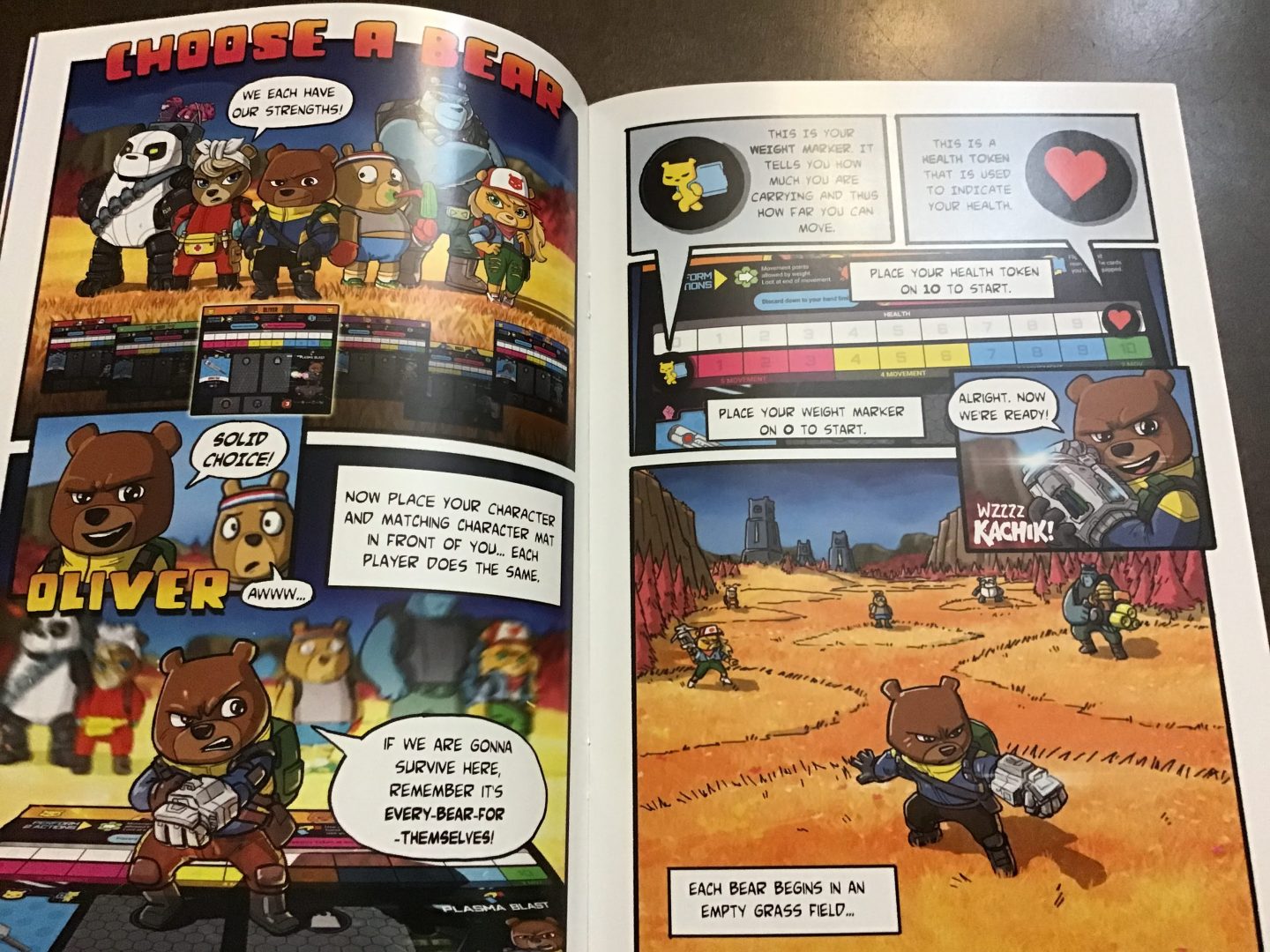 At the start of the game, each player picks a character, each which has two unique abilities. However , other than that, they are empty-handed, which means they will need to scour the land for items and resources.

Players will then take turns taking two actions on each of their turns. These can include:

Movement : Move a number of spaces that corresponds to how loaded down you are with extra weight. If you are carrying a lot of stuff, you can expect to have your movement value diminished significantly.

Attack : Use a weapon you are equipped with. Some are ranged, some are melee, some have splash damage, etc…

Equip / Reload. You can reload your weapons (which become flipped over after one use) and then proceed to reequip any armor/weapons on your character until you are content. 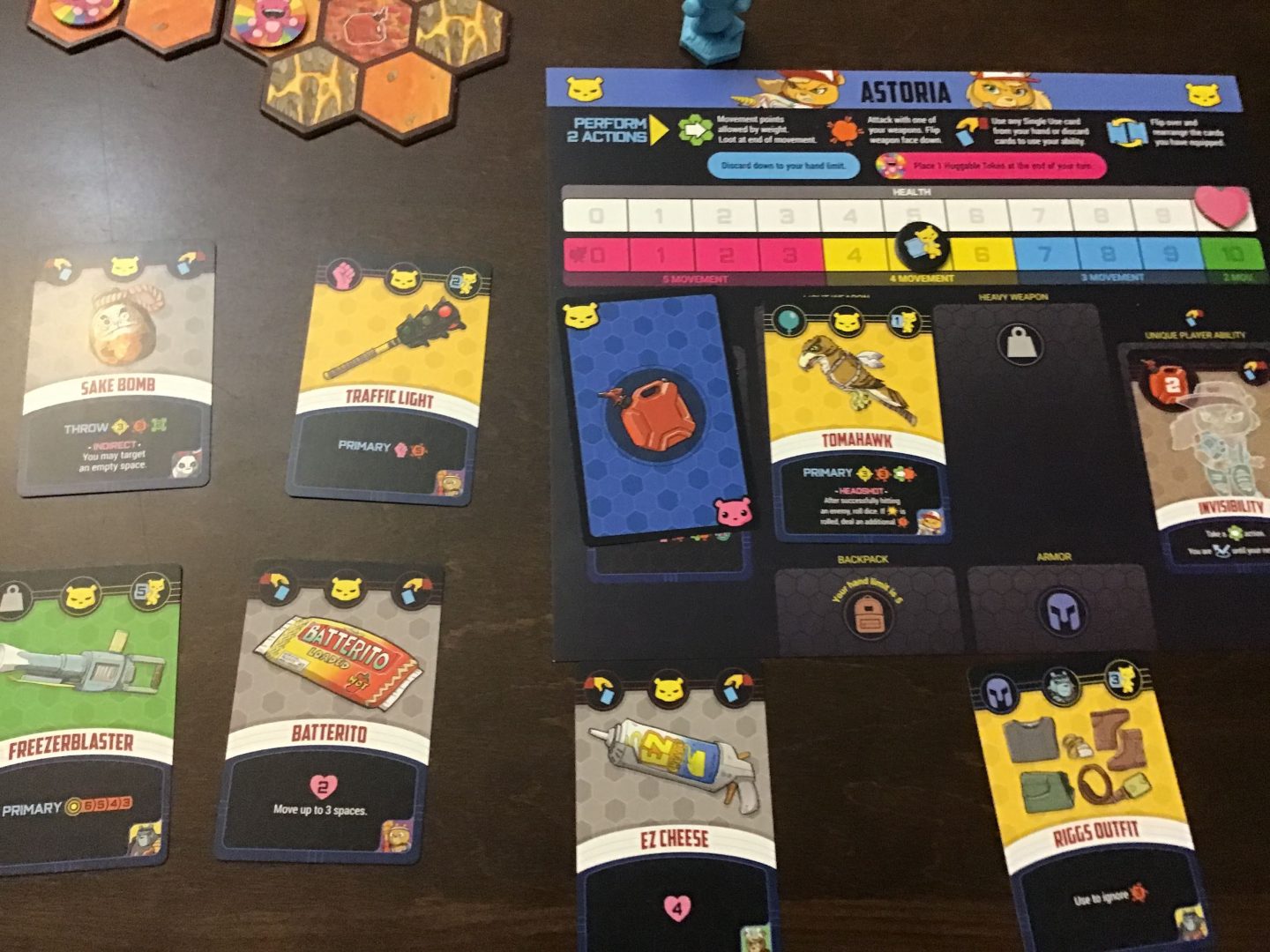 Among the various types of hexes your Bear may encounter in their adventure :

Blank space :Safe, and easy to traverse. Nothing to see here.
Gas Canister : If you end an action on one of these spaces, you may draw 2 cards.
Cliffs : You cannot shoot through these normally, but your enemies can’t shoot you through these either.
Lava : You can’t tread here.
Huggable Forest : Counts as difficult terrain, costs extra movement to step onto. On the plus side, these make you harder to hit, forcing enemies to roll a die to even have a chance to hit you (otherwise damage is normally automatic)
Ziggurat : Your attacks have extra range and can even shoot through cliff hexes since you are high up, but other players can see you , too, and worse, can shoot you through cliffs as well! 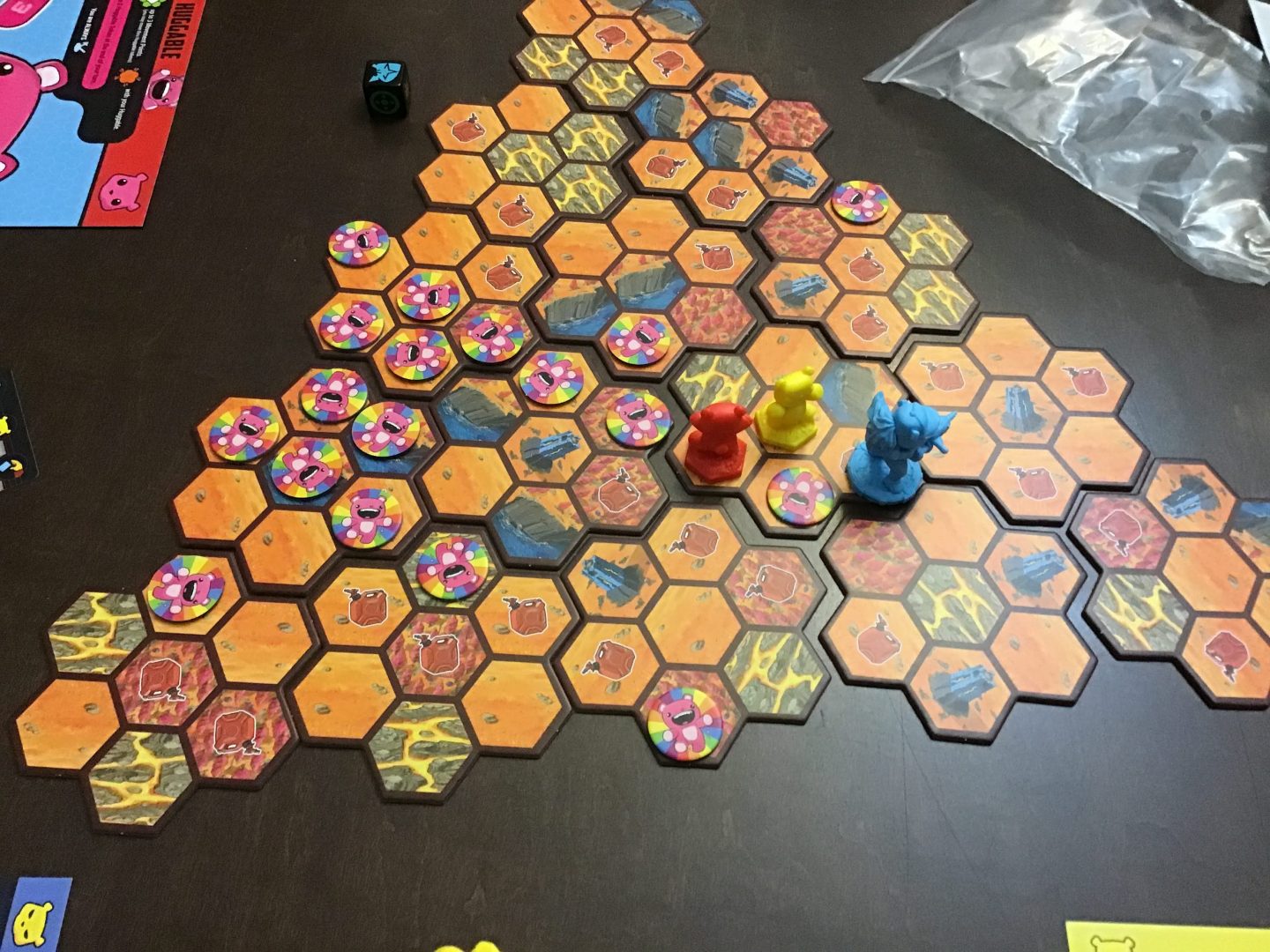 Players will take turns moving, dodging, shooting and otherwise ruthlessly savaging each other’s health bar until there is only one Bear standing. But there is more to this…

At the end of each turn, the active player gets to choose where to place Huggable Bear tokens on the board. While not intimidating in the least at first, these zombie-like bears will eventually be swarming all over the board, forcing you to not only contend with your rivals, but also requiring you to zigzag around the constantly-changing layout of Huggables surrounding you. You may, of course, attack and damage these cuties, but if you ever step on one, they explode on you for 3 instant points of damage!

And if you die, things aren’t over. You yourself are turned into one of the Huggable Hoard, and can seek vengeance! Simply flip over your character mat to the Huggable side, and you get 3 health, and the opportunity to move and take out other Battle Bears in an explosive hug in attempt to even the score—even if you still cannot win the overall game, at least you can get even! 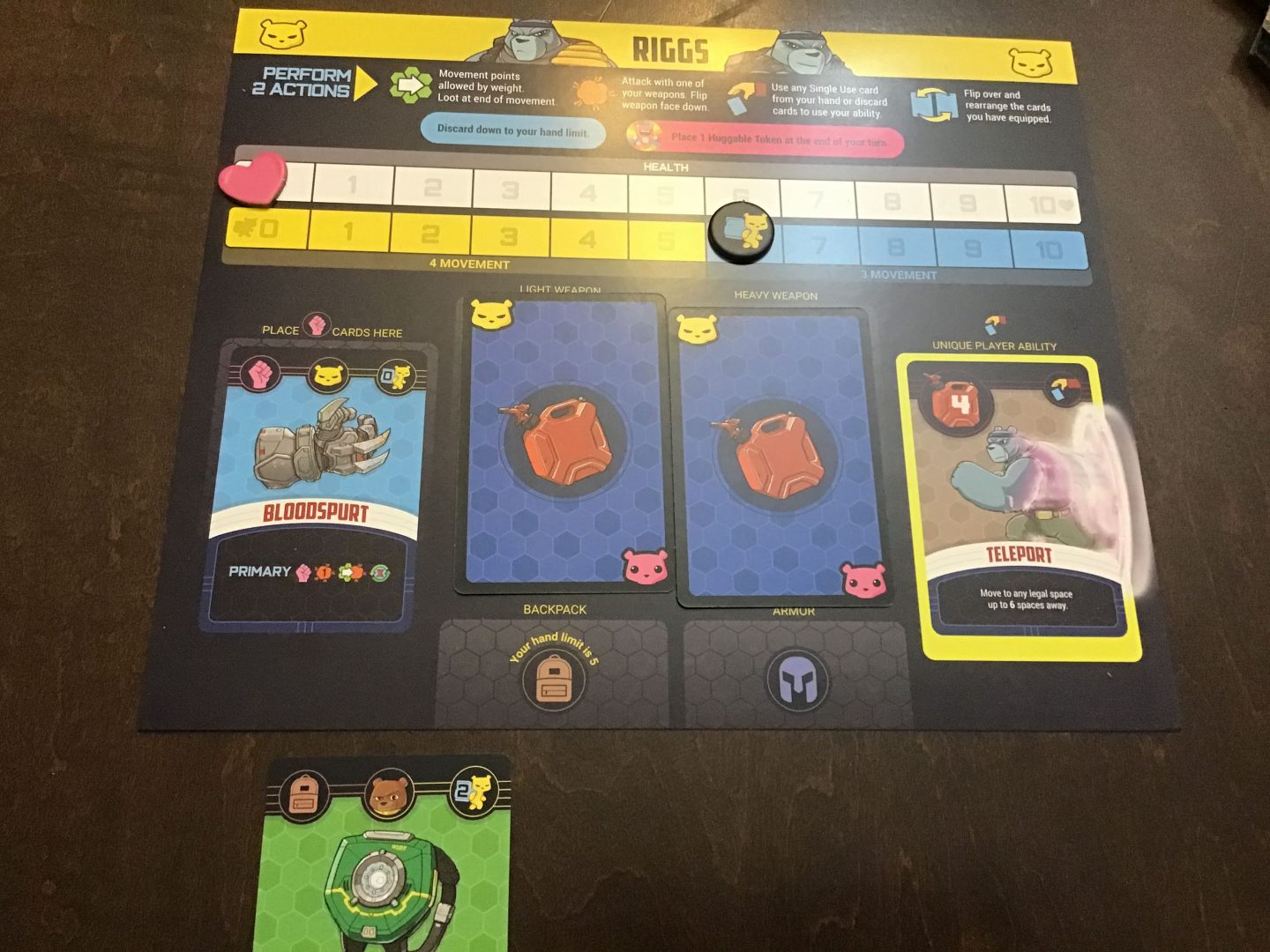 Okay, when it comes to the game and components, there is really next to nothing to complain about. We all had a blast playing it, and are looking forward to perhaps trying it out with some company that is coming over this weekend. The fact this game is fun, engaging with lots of player interaction should be the only closing point that I have in writing this review.

But, then again, there are my misgivings with the lack of promised updates.

Firstly, let me state that I know OOM was a small company when starting out, but they have gotten a tremendous following over the past few years with games such as Stars of Akarios (which was my most anticipated game of 2021 but was pushed back until 2022) and now Mythwind.

OOM is starting to enter the Big Leagues, and I do feel they need to start paying attention to their fan base and commitments. Yes, this may require setting aside more time/staff/resources to deal with older IP’s and products that they have in their catalog, but I feel that given the nature just how “simple” and short of a Rulebook Battle Bears has, it shouldn’t have had such important details missing from the instructions (such as critical hits, which are not explained at all in the manual itself, but rather it is left for you to figure out when looking at a very small number of cards that may have instructions for Critical Hits written on them ; how to establish turn order is also taken for granted as a priori knowledge).

I have nothing but praise for this game. And I want to wish continued success for everything that OOM does in the future. But if games like Akarios and Mythwind have lack of updates, support, and clarifications, my heart will be broken like a child who lost their stuffed Battle Bear they sleep with every night.

Final score once you manage to fill in the holes in “small details” in rules and actually play the game:

After reading Jazz’s review, if this sounds like a game for you at the time of this posting Battle Bears is available for purchase  check it out and get it HERE.
Find out more at BGG. (insert link)
Did you get it based on our review? Please comment below letting us know!

Check out Battle Bears and  OOMM Games on: