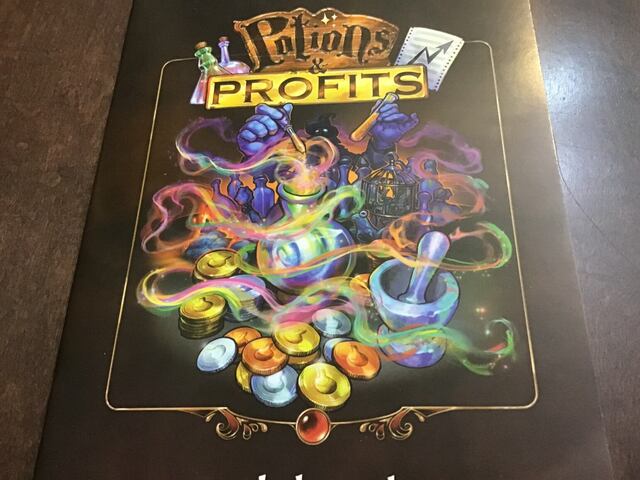 No. of Players: 3-6
Ages: 8+
Playing Time: 15-30 minutes.
Find more info on BoardGameGeek.com
From the Publisher:
In Potions and Profits, you are a Wizard representing one of many pharmaceutical corporations looking for new Potions to invest in. Competing Wizards will try to outbid you for Potions as you balance both your Stock Value and your Public Relations. The most profitable Potions tend to be the least ethical but that doesn’t matter so long as your investors are happy and not too many protesters are kicking down your door. Become the most profitable corporation you can by either monopolizing one type of Potion or by simply having the best pharmaceutical line around. It’s just business, magical or otherwise.
Disclaimer: The publisher provided the copy of  Potions and Profits. The opinions expressed in the review are completely my own. 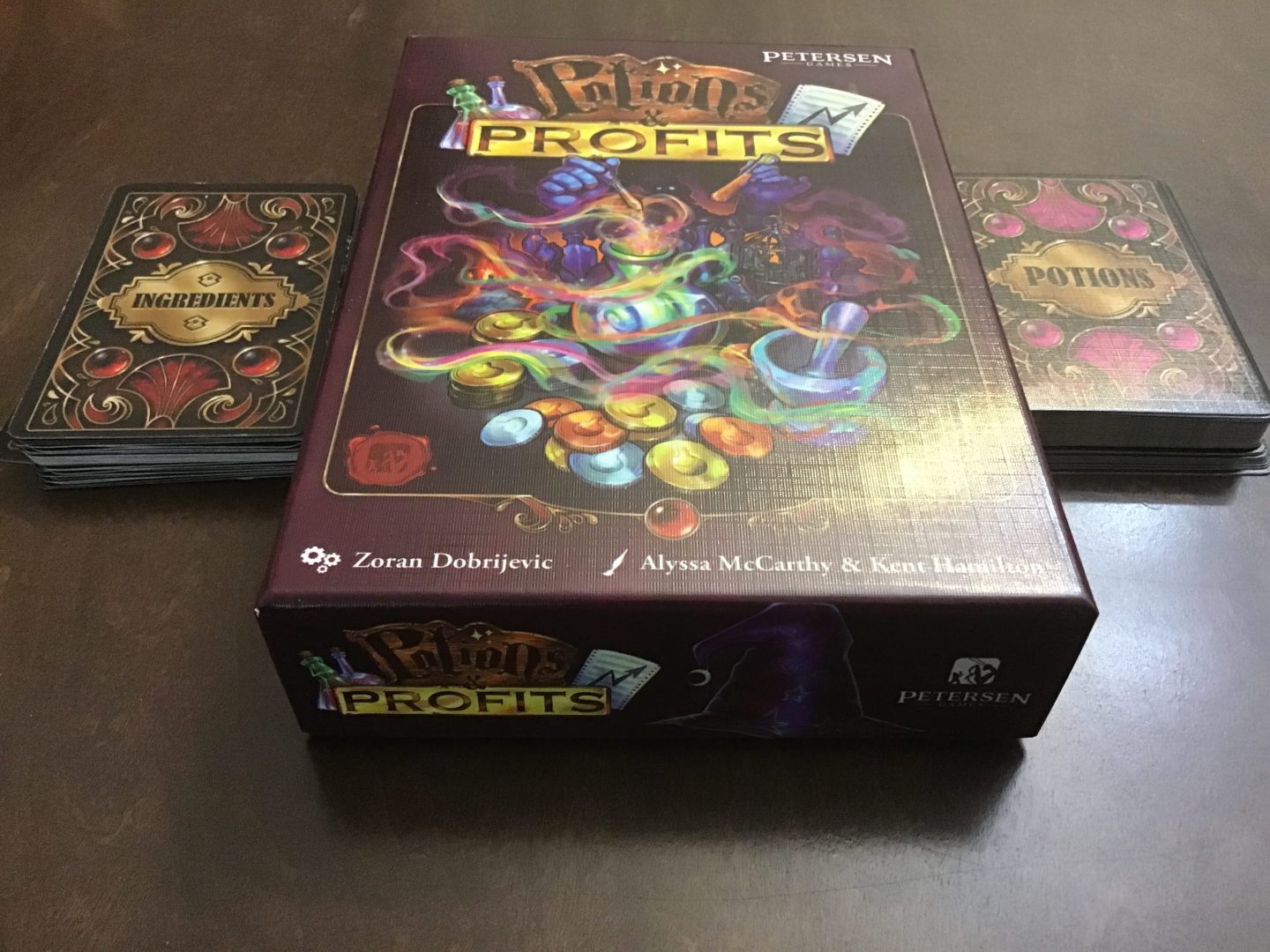 Petersen Games recently released a series of games in a Monster Invasion extravaganza, and today I will be taking look at Potions and Profits, a competitive card game for up to 6 players where mystical pharmaceutical Wizards will try to create new potions that bedazzle corporate investors and woo the public sentiment.

The ultimate goal is to either be the first to create three identical potion types (of which there are Helpful, Harmful, Vanity and Strange concoctions), or to make a variety of potion types and manage to have a Public Relations value of over 16 on a scale of 20. Meet either of those conditions and you win!

Being that Petersen Games sent me the entire set of the Monster Game experience to evaluate, comparatively speaking, I was looking forward to getting Potions and Profits to the table more than some of the others on the basis of pure aesthetics. Everything really looked superlative at our first glance.

My wife felt the same way, the game art design and associated humor really made us want to give this game a try. Among the most appealing aspects that immediately caught our attention :

—The size of the game box is such that it is very portable.
—We loved the vibrant comical presentation
—Wow, the card quality is among the best I have used
—The Rulebook is very well detailed, and tidy, and is perhaps the most durable paper I have seen for a game.
—This is a card game that has a board made for keeping track of Stock and PR values, which would seemingly add another dimension to the typical card game (presumably for the better).

Now if only the gameplay could match the quality of all the above..

For us , this did not quite happen. 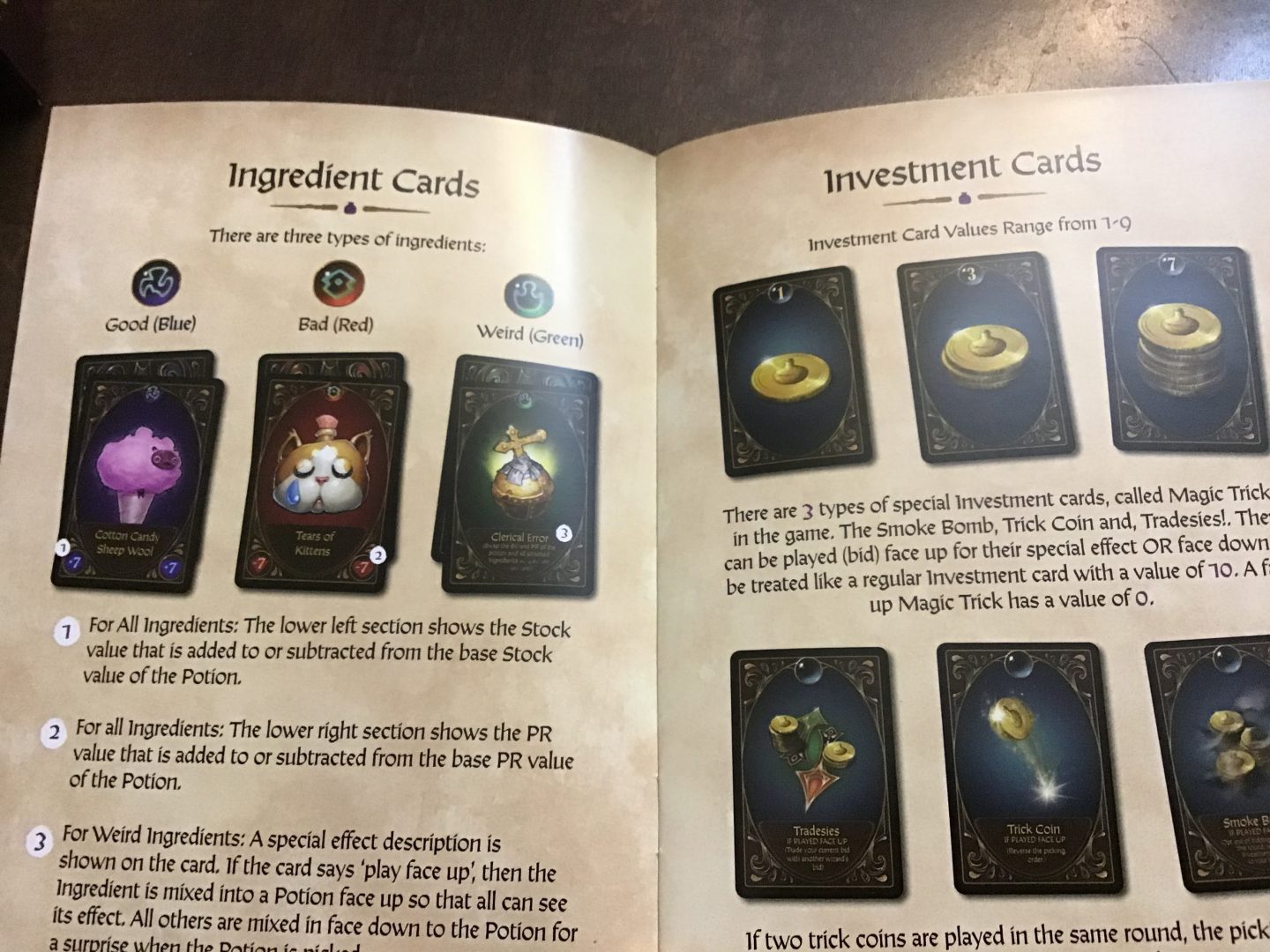 But first, let us break down the gameplay.

Players are all dealt 5 Investment cards and 5 ingredient cards at the start of the game. Investments have a random number of coins (1-9) and are used for bidding , and creating a pecking order for drafting the most beneficial potions. Ingredients are cards that you will eventually use to mix into a player-dependent number of base potion cards that are flipped over every round.

Every potion has a basic effect and/or a base number that will raise or lower your Stock Value of Public Relations value. Using unicorn horns as an example, if you happen to cut off a genuine unicorn horn to add to a concoction, this is of course a PR nightmare in today’s world, but this is nevertheless the most “pure” additive for millionaire moguls who can afford this luxury. Therefore, adding an ingredient like this would vastly increase your Stock Value but diminish your PR score in the eyes of the public.

So with that being understood, here’s how turn orders are structured :

The dealer deals the new cards for the round. This includes a base number of 3 investment cards (modified by the player’s stock and PR scores).

Next players may discard ingredient cards that have negative effects that they do not wish to have come back to haunt them. They can discard any number of ingredients should they wish and draw back up to their maximum total of 5 again. Or they can keep negative ingredients in their hand should they perhaps wish to sabotage another potion when the time comes…

Players then look at the new rounds’ potions available to modify in the center of the play space.

Next , players take turns using their Investment cards in a two-pronged step. First the first player can start an opening bid using one or two investment cards, placed face down.

This allows them to place one Ingredient onto one potion, facedown, so no other players can see what effect the card will have on the final product. The next player can also bid (provided they have ample investment cards available) They must either match the number of Investment Cards used by the previous player, or they can match and raise, using a higher number of Investment Cards if they want to perhaps force other players to use a higher price to be eligible to place Ingredient Cards. Or they may pass.

Play continues until either all Potion cards have a maximum of 3 ingredients on them or all players pass.

Next, players are flip over their investments to see who gets to pick their potion first. The highest numerical value wins the right to choose the first potion and so on. Once the pecking order is established, all Ingredient Cards placed on potions are flipped over and in the established order of highest bidders, players choose which Potion they get to keep for their company, and then apply the effects of all potions and ingredient cards, adding up numerical values that increase and decrease PR and Stock values accordingly.

New rounds of play continue until the winning conditions are met by one of the players.

Now there are a number of other one-off magical effects certain cards may have on the gameplay, but these are highly situational, but nevertheless, this would be the best synopsis of gameplay I could offer. 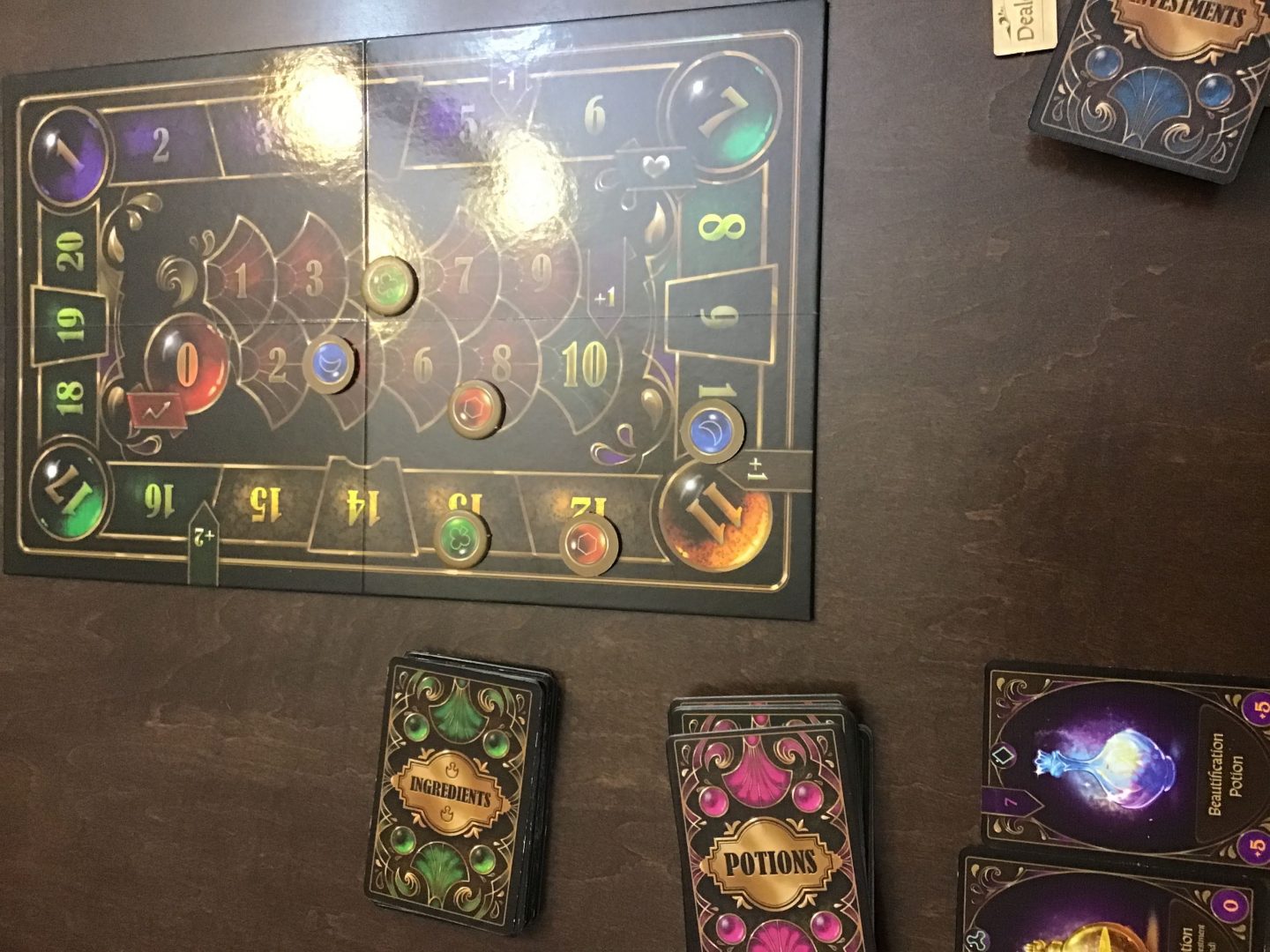 Now for us, unfortunately, as good as the theme and visuals of the game are, the actual workings of the game could not live up to the grandeur of the spectacular presentation. We all agreed on this.

Firstly, for some reason, I really felt like I was on a totally different plane of thought than the writer of the instruction manual. It is not written horribly at all, it was all grammatical, presentation was “seemingly” well organized, but for whatever reason, I seemed to be on a totally different wavelength than the author. Was it just me? Maybe, but for whatever reason, things seemed very unintuitive in wording, in spite of its well-crafted nature.

However, even fully comprehending the rules, this sense of disconnect carried over the actual game itself when in action. Things felt a bit forced in terms of the energy required to enjoy the experience. We understood how the game played, but it wasn’t quite as enjoyable as we had envisioned. What we attribute this to is perhaps having to overthink things. There can be quite a lot of things to remember in terms of the cards that are in play for a game of this size, and we may just be a victim of misattributing the game as being “simple for its size” when first setting our eyes upon it, while failing to adapt and realize that the game is deeper than it would suggest. But in the end, we feel the game is not so much “deep” as it is unnecessarily complicated for what it is.

The most apt comparison I have for the Potions and Profits at this time is a bloated game of poker. And in truth, the game itself DOES evoke all of the usual sorts of things that poker does—deception, banter, trying to size up the intentions and plans of your opponent, etc. But it does so in perhaps the most convoluted way I can conjure up in my imagination.

Now I am not saying that no one will enjoy this game. Again, I think anyone who likes poker or other similar card games would probably love it. But for myself and company (I personally grew up loving poker, for what it’s worth), the game felt a bit like it added too much to the formula to make it as much “thoughtless fun” as it seems it should have been. Put simply, it hurt my brain a bit too much trying to strategize, try to remember what kind of card I had placed into a particular potion, etc, and the sentiment was fully noted and experienced by other players at my table.

So while I have to give the game maker great credit for the fantastic presentation, the game itself is not one I would personally do again in the near future.

Nevertheless, I thank Petersen and Crew for allowing me the opportunity to review this.

As for the final score for the game?

Well, that will remain secret for now. If you are interesting in learning my final tally for this game, keep an eye on the next issue of Everything Board Game magazine, where all of the Petersen Monster Invasion Games are being pitted in a Battle Royale to see which Monster Game comes out on top!

Being this is a card game.

After reading Jazz’s review, if this sounds like a game for you at the time of this posting Potions and Profits is available for purchase. check it out and get it HERE.
Find out more at BGG.

Check out  Potions and Profits and  Petersen Games on: