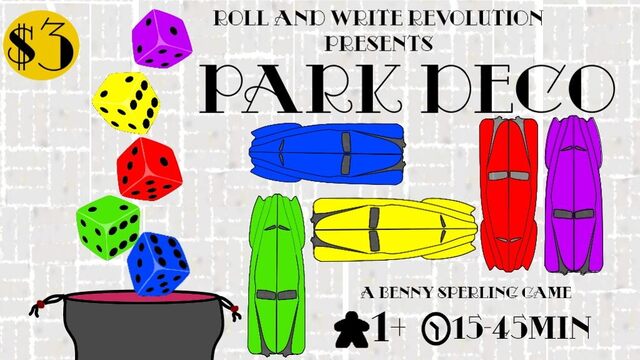 The foremost parking company, Park Deco, has a problem. 50 problems to be exact. It’s the end of the night and patrons are ready to leave. Only they can’t because the now-former employee up and left. But no worries, you can help them get the cars unparked and moving along again.

Players play simultaneously using dice drawn from a bag then rolled. Players will use die values for cars, to add dice to the bag, or to improve their skills. In this bag-building dice game, dice are added, mixed, and hopefully drawn as matching colors of dice to cars increases the value of those cars moved. Players will have to work several angles to get the biggest scores. The game has two modes: standard and long game. The game also plays solo or any number of players.

Each turn 2 dice are drawn from the bag and rolled. Players mark the value on their sheets for cars or numbers on a grid. They can also mark a color grid if they have that color die purchased.

The game ends after either 20 or 30 rounds. The winning player has ‘the most points (cars moved out of parking, number grid, or color wheels for dice).

The pandemic has pushed a lot of gamers to find new ways to play games, whether that is playing solo games, or via zoom. Designers have taken notice, and they have risen to meet this demand. Benny Sperling of Lagniappe Games has developed many roll and writes over the past year (most of which I have backed on Kickstarter and thoroughly enjoyed). His latest is Park Deco, a parking lot crammed tight with cars. Think back to when you could go to a sporting event or a concert. You work to free up the cars one at a time, or two if you are clever, to score points and prove you are the best parking attendant!

The setup, as with most roll and writes, is quite simple. Everyone gets a scoresheet and writing utensil. If you have made the parking discs, you can hand one out to each player as well. If not, it is not a big deal. Lastly, you will need to procure, probably from your own extensive collection, one die of red, blue, green, purple, yellow, and two white dice. Put the colored dice in a draw bag.

To start, everyone draws a colored die and marks off one of the matching colors in the color grid and the leftmost symbol on the matching number grid. Each person does this separately. Lastly, remove the colored dice and put the white dice in the bag.

The theme of freeing up cars is not new. There are plenty of other games out there with this theme. Think Fun has Rush Hour. There is an app called Parking Escape. Park Deco brings this theme to roll and write and with great success. The mechanic of rolling dice and having to make meaningful and sometimes tough decisions that have a far-reaching impact is not new either. But it blends so well with this theme. Benny Sperling matched a great theme with a great mechanic for a great gaming experience.

Park Deco moves quickly. On a player’s turn, two dice are randomly drawn from the bag. At the beginning, this will only be the two white dice. They are neutral. As the game progressing, players will unlock the other dice to add to the bag. The drawn dice are rolled. The results are how each player must spend the dice.

If a car is freed from the parking lot, it scores either one or three points. If you match the color with the die used, it scores three points. Otherwise, only one point is scored for matching the number. The car must have a space to its front, left front or right front to be considered free, and it must have a path to one of the four openings.

A die used in the color grid allows the player to complete either columns for 5 points at the end of the game, or rows that allow the player to mark of a free car of any color present in the completed row.

To unlock a colored die, the wheel around it must be filled in with exactly seven. For example, a player can use a 4 on one turn and a 3 on a subsequent turn. Once a color is unlocked by any player, that die is added to the bag. In order to use it, however, a player must have unlocked it. If not, it is treated as a neutral die. Any completed wheel is worth five points at the end of the game.

The number grid unlocks from left right. If you can unlock all four spaces in a number, six points are scored at the end of the game. The other powers can be used are: make a die any number, +/- 1 to any die, score a car for 2 times its value (2 or 6 points).

The game ends after either 20 or 30 rounds, a short or long game. Honestly, the long game is not that long. To score, the number of cars released is counted by each player. The lowest amount is the limiting number for everyone. Everyone scores that number of cars, but they can be selected. So, the higher valued cars first. Then, add any bonuses listed about. The highest score wins!

The artwork is minimal, but effective. The cars can be difficult to tell if they can get out. The components are all supplied by you. I printed the game out on standard paper and laminated them. This will allow for maximum replayability. All the dice are standard D6 that just need to be color coordinated with what is needed for the game. Red, Blue, Green, Yellow, Purple, and two white are required.

The game plays quickly once everyone gets the hang of it. You have meaningful decisions to make that can really affect your game moving forward.  There are plenty of ways to score points, but which path will you choose? This makes every roll matter. Whether to use the yellow six to move a car for 3 points, use the 6 to unlock a bonus, the yellow to complete a row or column of the color grid, or the 6 pips to get close to unlocking another die. These are all options for just one of the two dice. Also, it is only $3 for the print and play files.

The rules are a bit hard to understand at first, as is the final scoring. It takes a few rolls to get it. After that, the game moves smoothly.

Park Deco will definitely be a new staple in our roll and write family. I have acquired many of them over the past two years with varying degree of fun and success. Park Deco excels where others fail. I think that what my son said after 20 rounds sums Park Deco up perfectly: “Can we just play the long game? I like this game!” I cannot argue with that, and neither should you!

After reading Adam’s review, if this sounds like a game for you at the time of this posting Park Deco – a Roll and Write Revolution game will be live on KICKSTARTER until Tue, November 30 2021 2:50 PM PST, and has surpassed it’s funding goal of $100. check it out and back it HERE.
Find out more at BGG.
Did you back it based on our review? Please comment below letting us know!