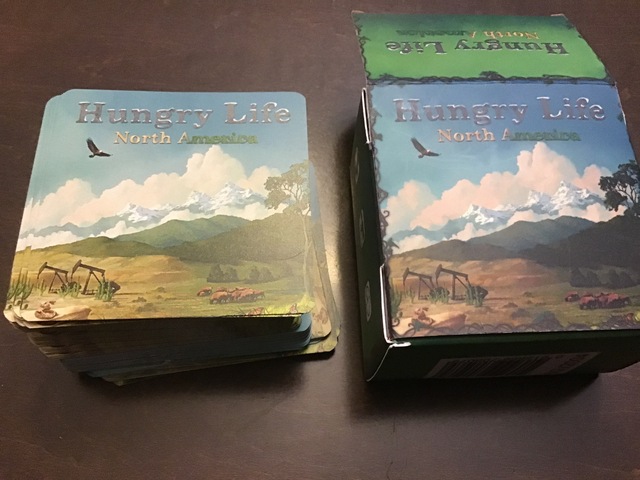 Hungry Life is an environmental education and awareness card game played between 2-5 players and for the whole family, schools and holidays.

Each player starts with their own deck of 20 cards plus five in their hand (player count dependent). You start by placing a primary producer/Base Card to create a new habitat. Each animal card will list what it can eat leading up to an apex predator. Each new habitat is connected as the game goes on, but with human projects such as roads and housing estates these habitats can become disconnected. Animals that could once be moved are now trapped. You must strategically place your animals, human projects and natural events to thwart your opponents.

The game mechanics have been designed to practically demonstrate how humans are causing issues but also how we can help in a simple and family friendly game lasting 25 – 45min.

Each animal card will also feature data about that animal so you can learn things like their weight, population size/trend as well as where they fall on the endangered species list.
In the rules you’ll also find a list of organizations that are working hard to protect our natural world.

The first player to place all their cards wins the game.

Disclaimer: The publisher provided the copy of Hungry Life: North America. The opinions expressed in the review are completely my own.
Review: 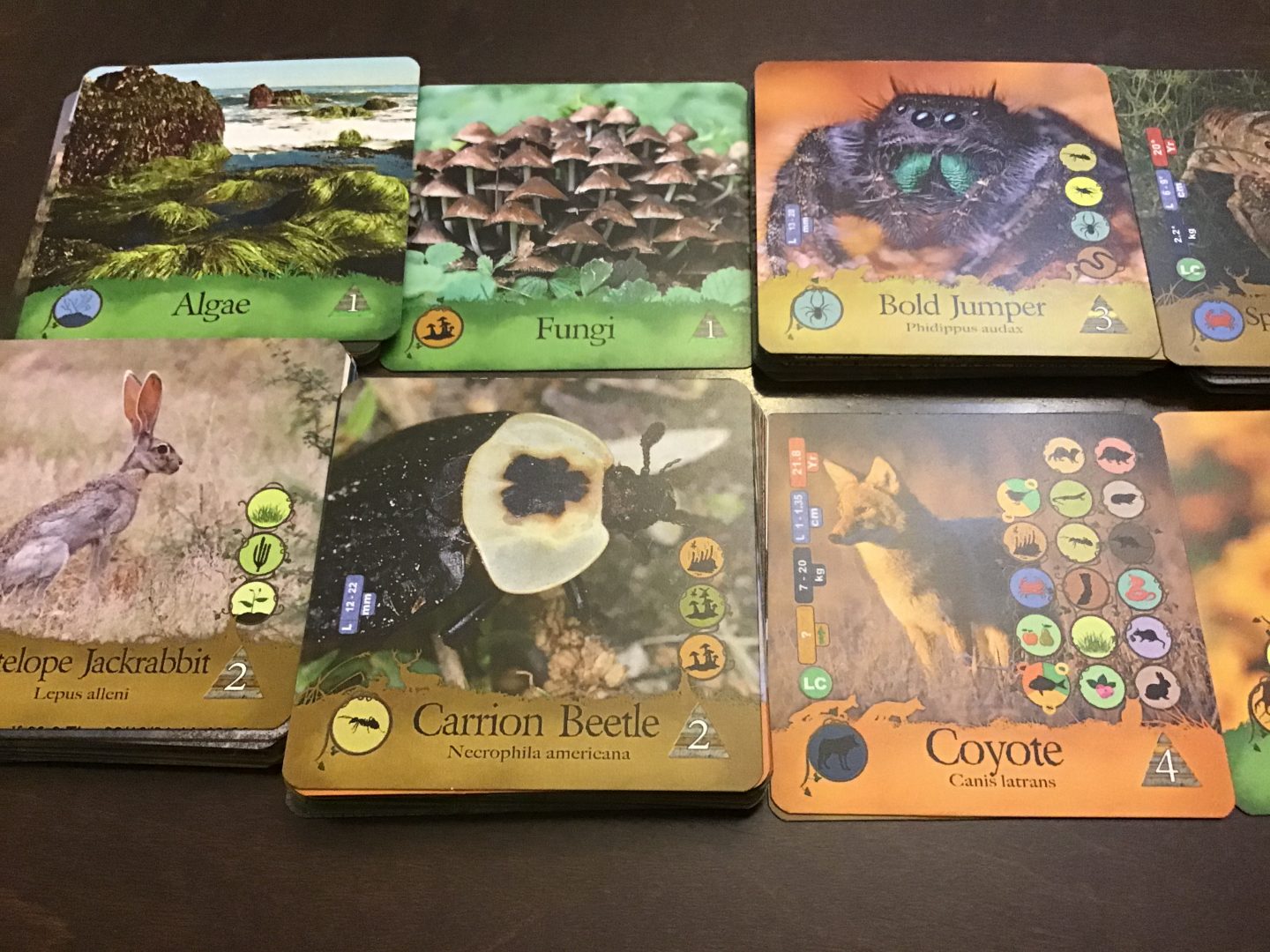 I am usually pretty keen on trying out educational games when given the opportunity. Hungry Life is one such game that had a Kickstarter not too long ago, and is finally starting to arrive in people’s hands, and with such the case, Sharkee Games had a reviewer copy of the game made available for me to try out.

For this particular game, there are two versions, one for Europe and one for North America. As I live in North America, this is the version that was sent to me.

Hungry Life is a card game for 2-5 players that essentially a nature-lovers boon ; if this type of theme appeals to you, you are in luck.

The cards are all very well detailed, the directions are simple and easy enough for a 5 year old to learn. Most of the cards sport totally unique art (animals, landscapes/terrains, etc), so there is fortunately not a lot of redundancy among the many cards that come with the game. 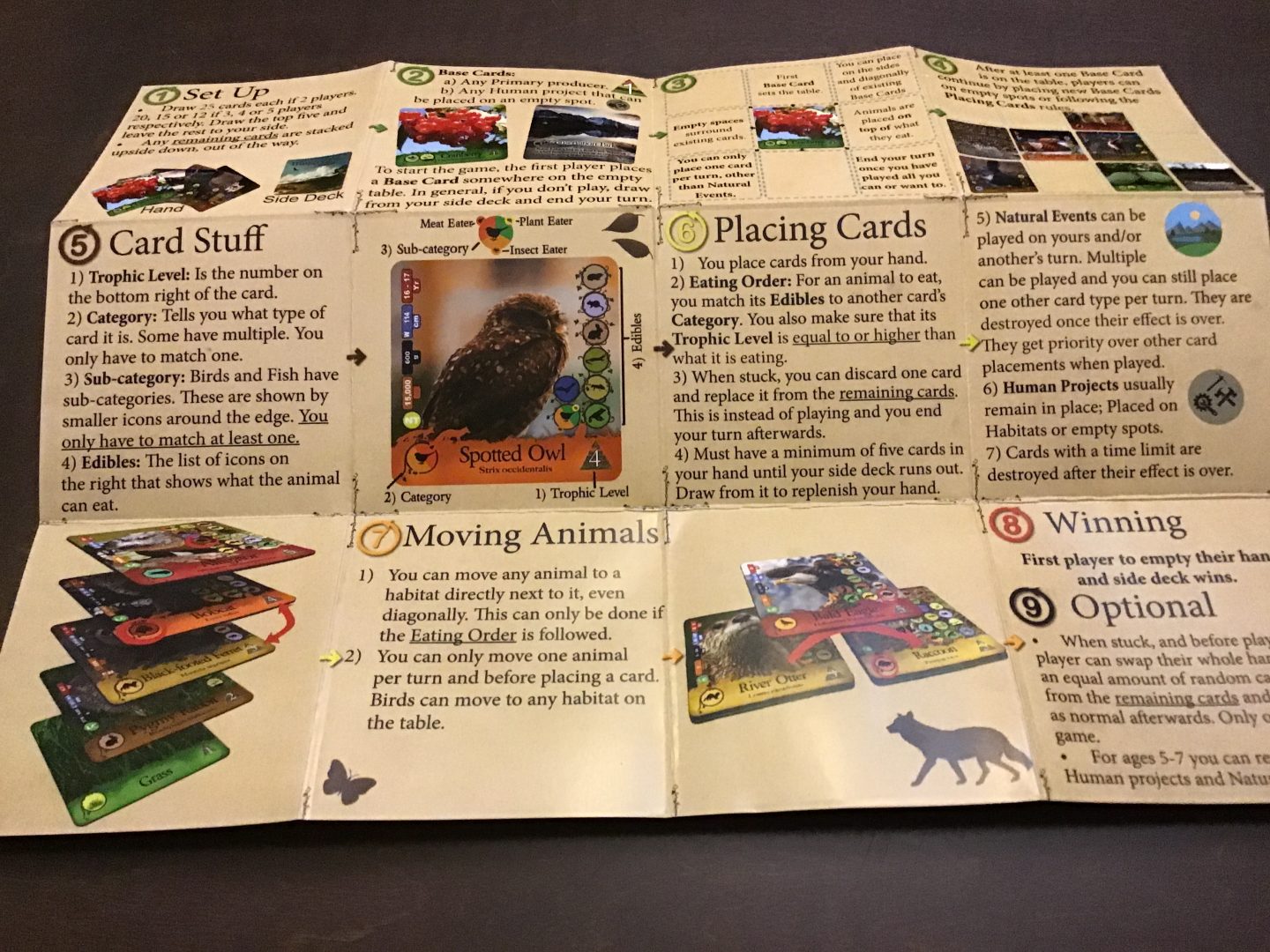 The game starts with each player being distributed a large number of cards (which varies on player count). The objective is the be the first player to empty their hand. Normally you can only play one card per turn (unless the card is a Natural Event), so here is where some strategy can come into play.

The game functions around Trophic Levels, which is essentially a food-chain numeric hierarchy where lower numbers are more “base” and higher numbers represent animals that are higher up in nature’s pecking order. A “Base” card is a trophic level of 1, and is generally an edible such as berries fruit, while higher tiered cards are various animals.

To start players may only place base cards on the table. You can generally always play base cards anywhere on the play space directly next to an already played card, and the playing area may be constantly changing as the game progresses as a result. As players take turns , if they happen to have animals that are at an equal or higher trophic level than an edible on the board, they can play their animal card by placing it on the edible (if they are indeed able to eat the item, as denoted by the card iconography which displays what types of food each animal eats.)

Alternatively, players have a bonus action of sorts they can take during each game—you can move an animal to another habitat for free if there is an edible food next to it. This may give you access to another card that was previously underneath the animal that was just moved so you can utilize it to perhaps play another card…

There are other card types, available too. Human Projects will generally destroy a habitat and make it impossible for new cards to be played upon it as an example, since animals will not be able to move into a factory after all. Natural Events can also shape the play space to the benefit or detriment of the animal kingdoms on the board, too, so all in all, there is a good variety of card types to shape the gameplay.

1) Is the game fun for its targeted audience?
2) Is it indeed educational?

To answer question 1, the game was indeed fun for us and children.

It was educational, if in a more limited capacity. I did have a few issues that I would like to touch upon.

The first is that I feel there is a lot of “educational information” on each card that is not particular relevant to gameplay. And I am usually okay with this , but for whatever reason they have the stats of animals depicted using Metric measurements. Now, I can understand this being the case for the European edition of the game, but really, I mean for North Americans (who I would assume would comprise the bulk of people ordering the NA version of this game), I would expect them to cater to their audience a bit more and supply information that is relevant to its intended demographic. Even having lived in various countries within North America from time to time, I still found Imperial Measurements used quite often, so it would seem to me that this is a bit of a misstep in terms of making a connection to a large chunk of the NA population.

Furthermore, and along these lines, there is a bit of huge contradiction between the Kickstarter Page (which states this game is fundamentally supposed to be *GASP* Educational) and the games’ instruction manual. 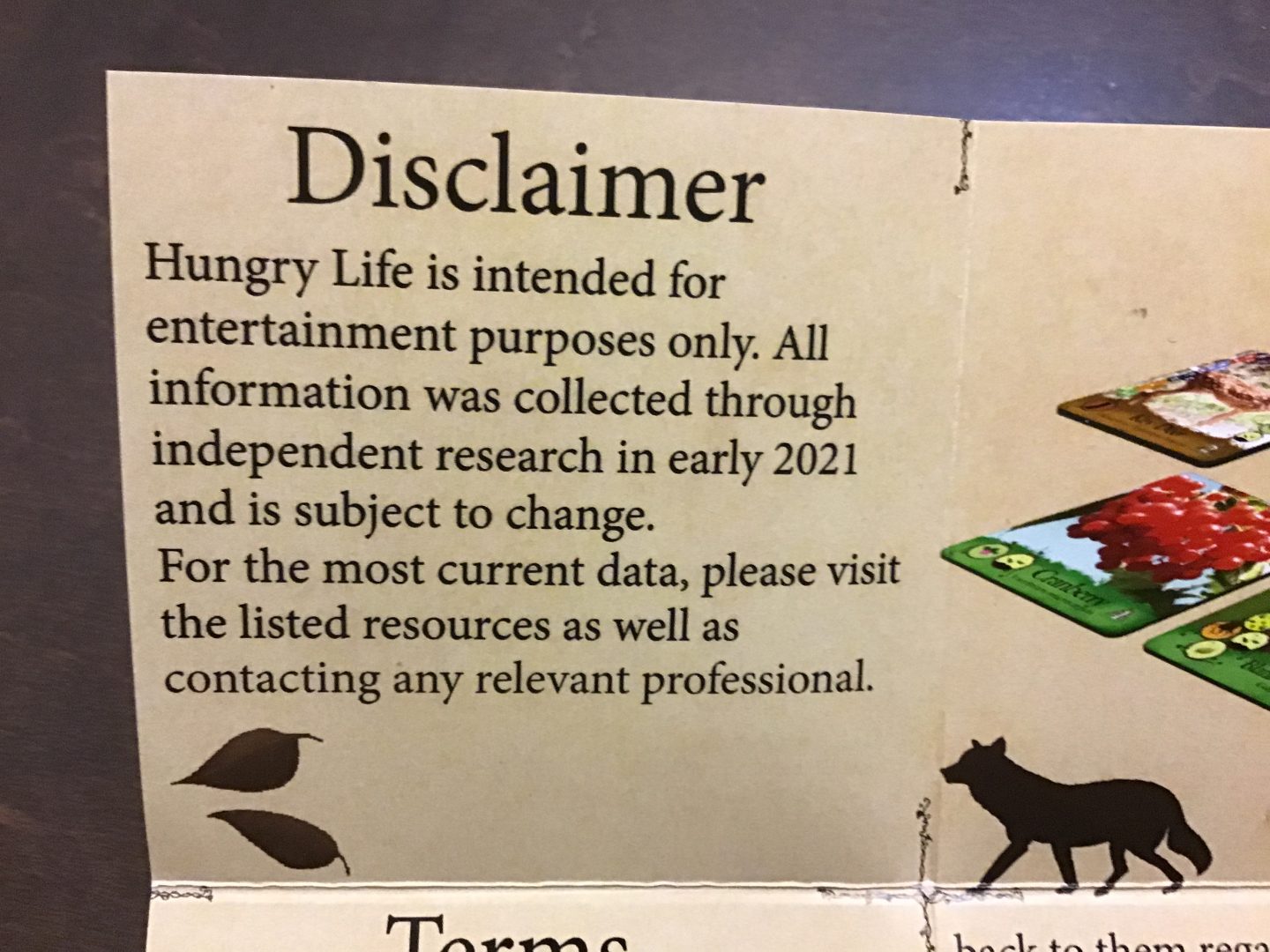 Imagine my shock reading the instructions in the box stating “Hungry Life is intended for Entertainment Purposes only”. Blah blah blah, “For the most current data, please visit the listed sources as well as contacting any relevant professional”.

Now I can understand if data is constantly changing, but to me, that seemed to be a bit of a snarky affront to those who might have purchased the game. I can’t speak for anyone else, but I would have taken a bit of an issue with that particular wording had I actually purchased the game. It is self described as “educational” at the point of sale.

Moreover, though, when combined with the decision to ignore the Imperial measurements for this edition of the game, it “seems” they are almost trying to dismiss and eschew the concept of being an educational game entirely in some respects…

The bottom line though is regardless of the creators’ intentions, some learning points are to be had.

Most you can be learned in playing this game is what each animal eats and general concepts of habitat destruction and how it affects animals thru rendering you unable to place animal or habitat cards any more after certain Human Projects have been implemented.

It would again have been nice to have the option to read animal stats and vitals in a system of measurement that would hold more relevance to the majority of the North American population, but as it is, the gameplay itself is unaffected by these stats. Hungry Life does play swiftly and efficiently though, and was enjoyed by our young one! 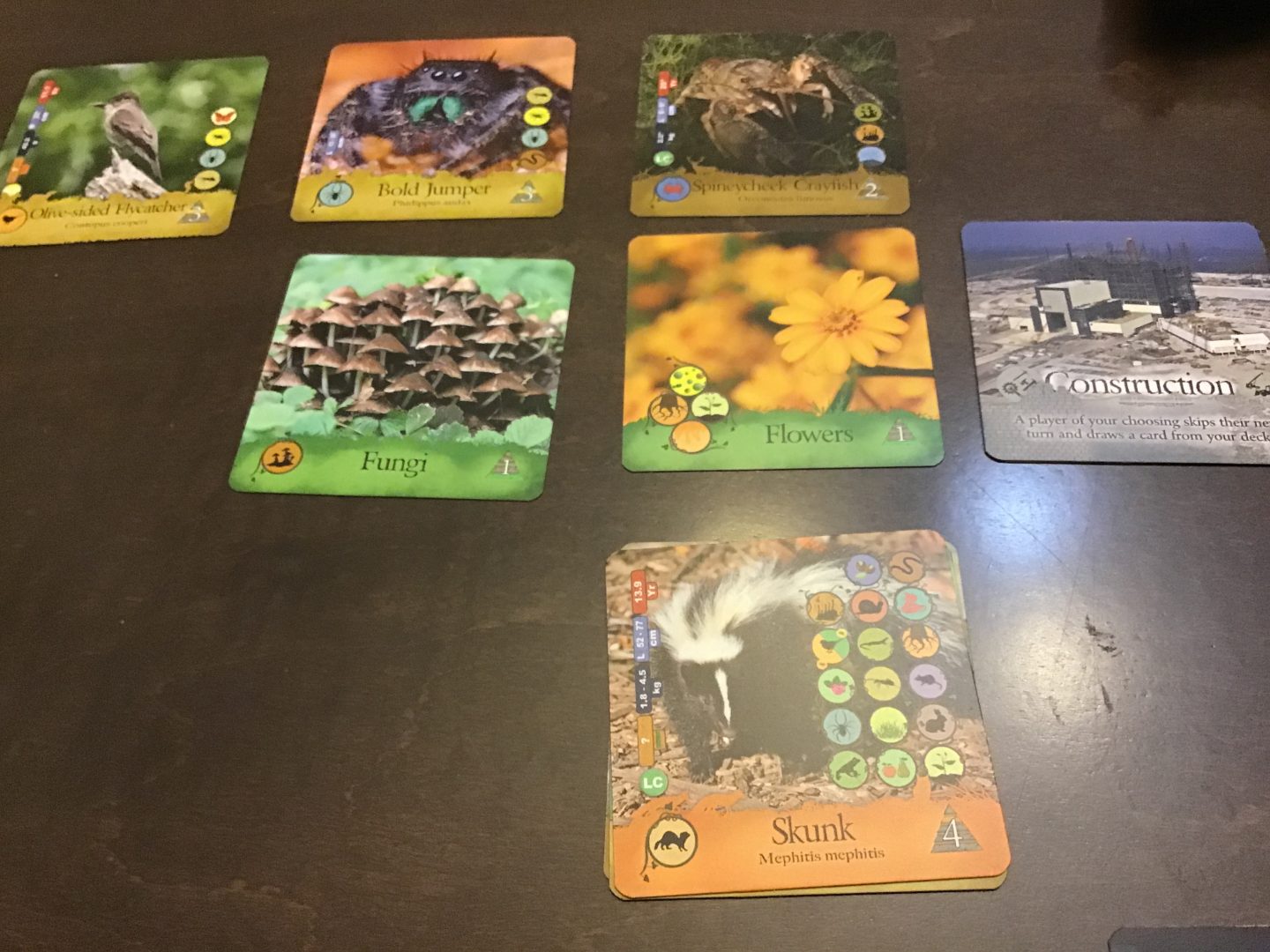 After reading Jazz’s review, if this sounds like a game for you, Check Hungry Life out HERE.

Check out Hungry Life and SharkeeGames
on: