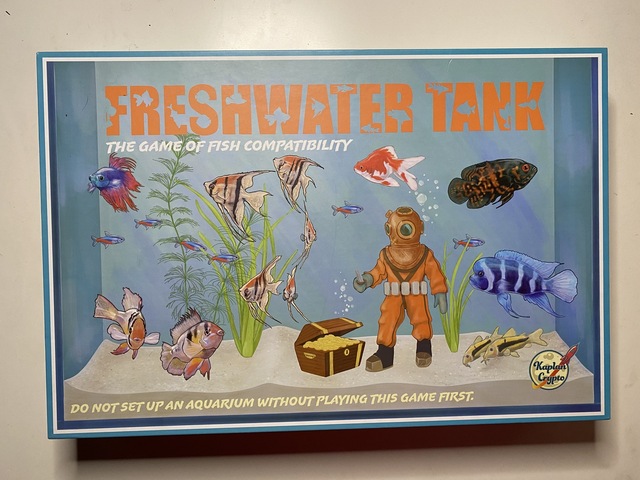 Have you ever dreamed of making your freshwater aquarium? Have you ever wondered what fish you would like to keep, or what fish will go well together? Well, in Freshwater Tank, now you can. With 155 fish and 100 incidents, see for yourself what fish you would want to have and how to take care of them while having fun with friends and families; you can even create what type of community tank you would desire. So, do you want a goldfish tank, a tropical fish tank, an aggressive cichlid tank, or any other type? That’s up to you to decide.

The goal of the game is to become the first person to create a compatible fish tank with 10 fish but be careful; there you might lose some of your fish as you play. So, what are you waiting for? Set up your aquarium.

Players roll a die to move around the board and collect fish or cards when landing on specially marked spaces. Players learn fish facts and aquarium care in a fun board game.

Disclaimer: The publisher provided the copy of  Freshwater Tank. The opinions expressed in the review are completely my own. 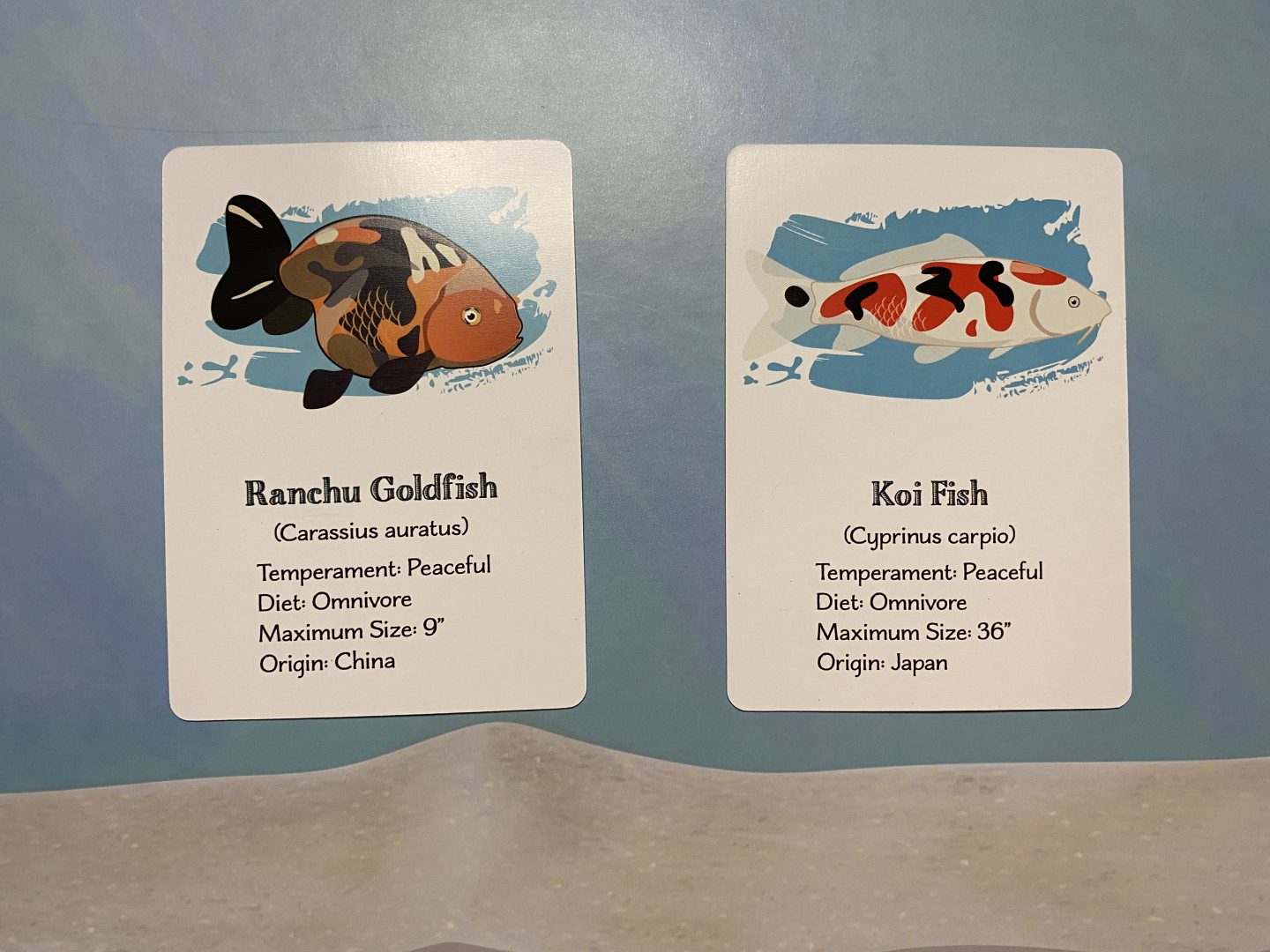 Freshwater Tank has the beauty of Wingspan, but in the aquatic world. There are 155 unique fish cards. This game is heavy on theme and scientific accuracy. Does this help the game float or sink? Let’s take a look!

The setup is quick and easy. Place the large gameboard in the middle. Shuffle both decks and place them on the associated spot on the board. Each player takes an aquarium board and an incredibly detailed wooden fish pawn, placing the pawn on the start space of the board.

The rules are simple, on the surface. You are trying to draw from the deck of fish cards to get 10 fish that get along with each other in your tank. If you land on a “!” space, draw an Incident card and follow what it says. These can be good or bad. You could go back a few spaces, draw fish cards, or even get a different fish. If you land on a space featuring a fish, draw a fish card, consult the supplied compatibility chart, and decide to keep it or not. If the chart has a green dot, the two types are compatible. If it is yellow, they can get along, but could be dangerous. If it is red, the two fish are enemies and cannot reside in the same tank. Depending on the level you are playing, you are allowed only a certain number of yellow dots.

The theme is strong throughout. The mechanics are the tried-and-true roll and move. Roll the die, move your pawn. Draw a card. Play or discard it. Move on. But the artwork really draws you into the theme of the game. Every aspect of the artwork works to achieve this.

You travel clockwise around the board collecting fish cards and adding the ones that play nice together to your tank and discarding the mean ones. First one to 10 fish that play well together, wins! 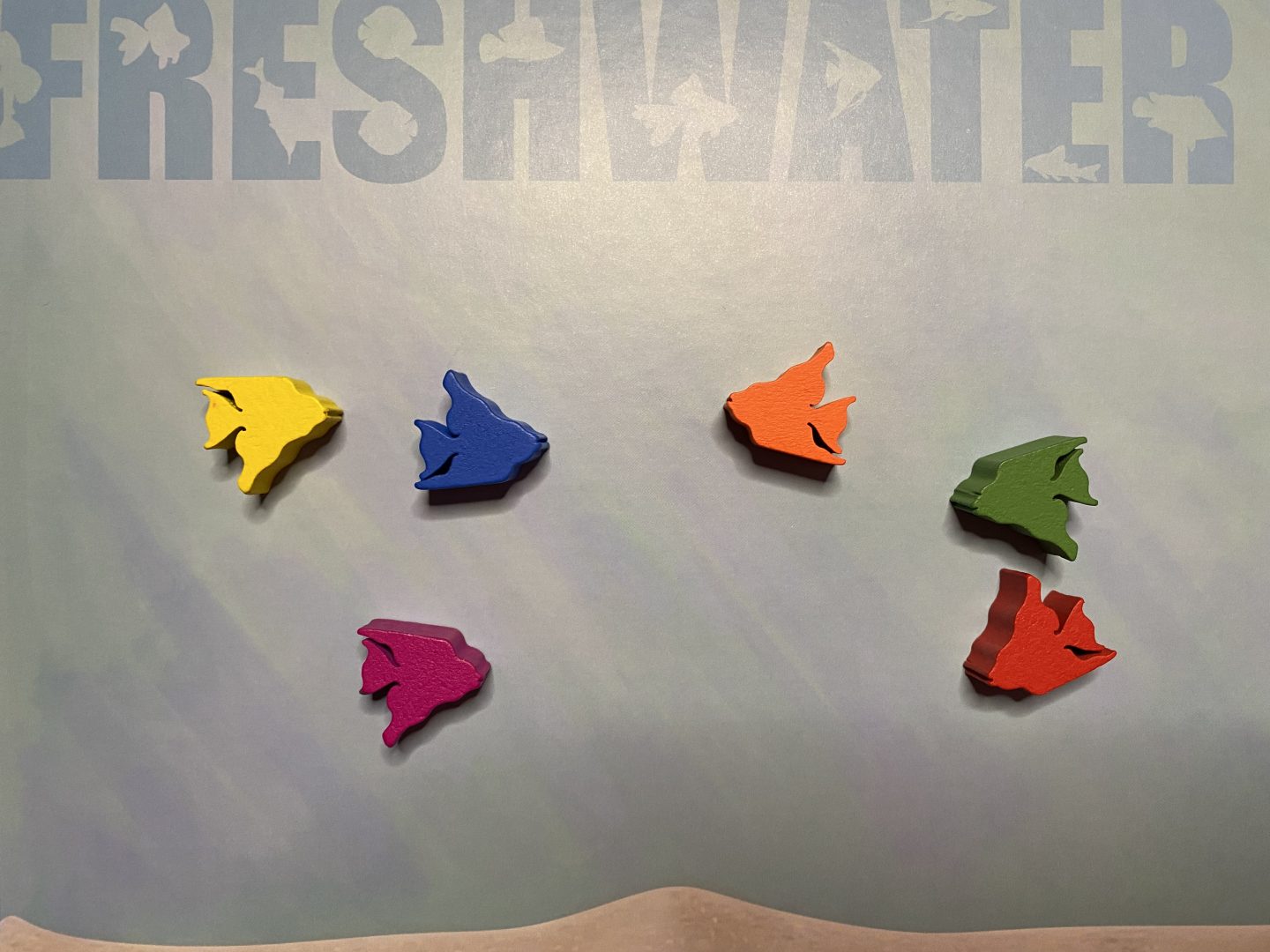 Oh man. The artwork is fantastic. Each fish only appears once, making each of its 155 cards unique. Omer Ugur bit off a lot, and it paid off well. The tokens are custom wooden fish that look like a beta fish. These, too, are amazing. The Incident cards lack a little in the flair department. They look bland and generic compared to the amazing Fish cards and the artwork on the box. The aquariums could have used a little spicing up with some coral, boat wreckage, algae, or the like. All the components though are well made and should last a long while.

The simplicity of Freshwater Tank works in its favor. It could easily be sold to schools and biology teachers. The science here is on point and on display. The artwork is just stunning and beautiful. The cards for each fish contain a lot of details: native location, scientific name, diet, size, temperament. Scientifically speaking, this game nails it.

Freshwater Tank wants to be the Wingspan of fish games, and it just doesn’t make it that far. The gameboard could have been replaced with just a custom D6: 1 blank side, 2 Incident card sides, 3 Fish card sides. No need for an extra tank or a game board. This would eliminate the pretty fish tokens, but overall, it could seriously reduce the cost, and weight, of this game, making it more approachable.

Having to check every fish against every other fish becomes tedious. I understand that this is the main point of the game but finding a better or faster way to accomplish this would have made the gaming experience better. Most of the fish have a peaceful temperament (scientifically accurate) which makes the game go pretty fast. I never went completely around the board twice in any game I played. I also never needed a second tank.

I wish there was more interaction between players and ways to decorate my tank with the fun aquarium stuff you see at the pet stores, scoring bonus points. Then, you could be decorating your tank while trying to fill it. Points for both. Put some tension in there as to when to complete your tank. You could also use the decorations as a place to hide a fish that doesn’t get along with others. That could lower a red dot to a yellow and a yellow to a green. A little more playtesting would have brought out ways to add complexity to this gorgeous game. 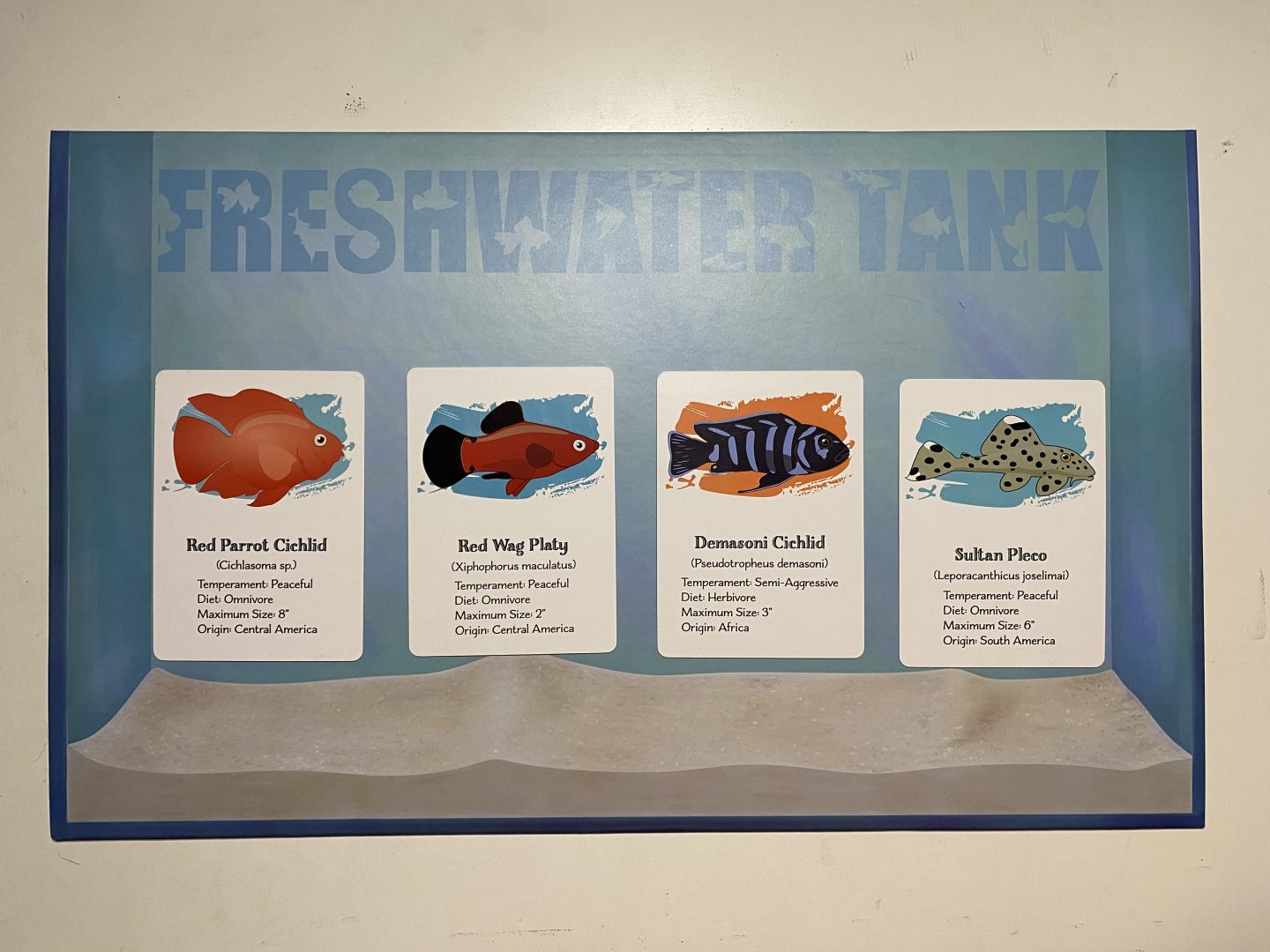 For starters, the first thing I noticed was how physically heavy the game was. I checked the shipping label: 5 pounds! That is a lot of game! The gameplay weight, however, is much lighter. On a scale of 1-5, Freshwater Tank resides at about a 2. With the Monopoly looking board and the roll and move aspect, the game just doesn’t have the depth (get it?) that it wanted to have. It is a beautiful game to look at. It is fun to play once or twice. It is a game that suffers from putting being scientific accuracy over gameplay fun and dynamics. This is a game that would thrive in an elementary school where you are teaching about biomes. Looking up the compatibility of each combination and how they interact with the other fish takes up a lot of time, but it could be viewed as very educational for students. This game might not “sea” a lot of table time at my house, but be sure that when it does, I will always be amazed at the beauty of the cards.

After reading Adam’s review, if this sounds like a game for you at the time of this posting Game Name is available at Amazon check it out and get it HERE.
Find out more at BGG.