Be fast or be last!

In Cubitos, players take on the role of participants in the annual Cube Cup, a race of strategy and luck to determine the Cubitos Champion. Each player has a runner on the racetrack and a support team, which is represented by all the dice you roll. Each turn, you roll dice and use their results to move along the racetrack, buy new dice, and use abilities — but you must be careful not to push your luck rolling too much or you could bust!


Review:
If you’ve seen the cover art for Cubitos, you would be forgiven for not being interested in this game. It conveys almost nothing about the game within (and may bring to mind a particular pineapple-dwelling sea creature). 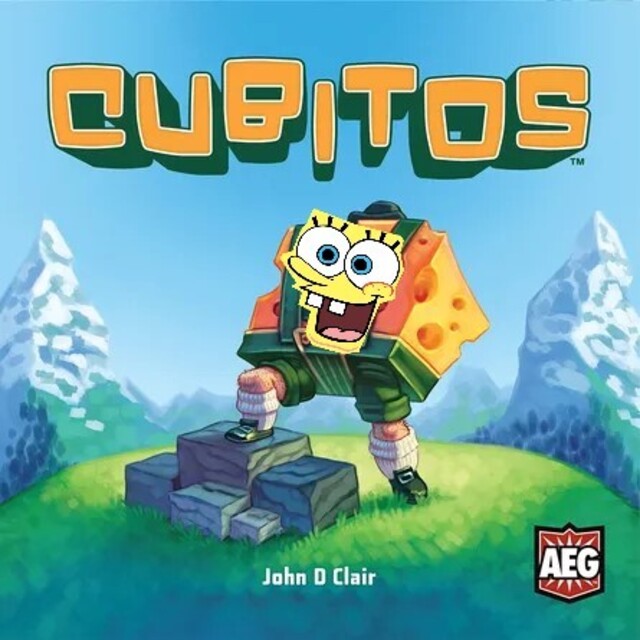 Look upon my terrible Photoshop skills ye mighty and despair

As it turns out, this well-dressed cheese is one of the several delightful inhabitants of the cube based world this game takes place in. The other characters include a wizard dog, a baseball playing beaver, a rock-and-roll pineapple, and more. Why they decided on just the cheese character for the box art, we may never know. Anyway enough about the box and the game world, what’s the game actually like?

Cubitos is a dice-rolling push-your-luck race that provides more pure enjoyment than probably any other game I’ve played. There’s just something extremely satisfying about shaking huge handfuls of brightly colored cubes and releasing them to watch bounce and roll with that perfect clacking audio sensation. 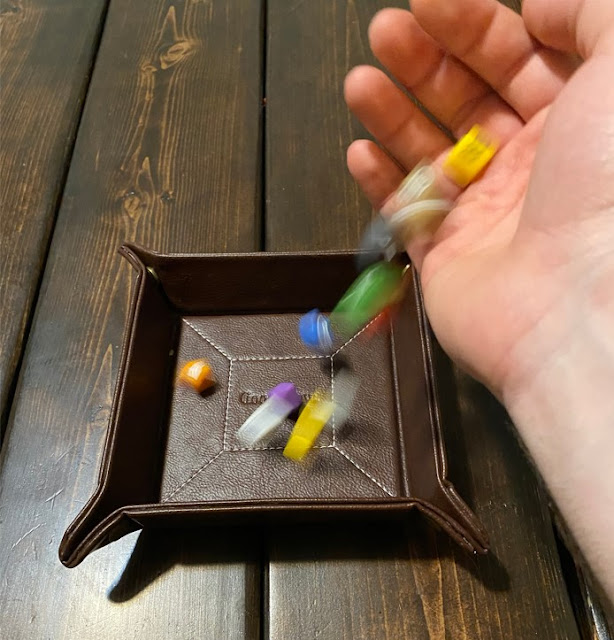 This is where most of the enjoyment comes from, as you will roll at least nine dice each round, and possibly a decent amount more. But I’m getting ahead of myself, let’s talk a little bit about how the game works. 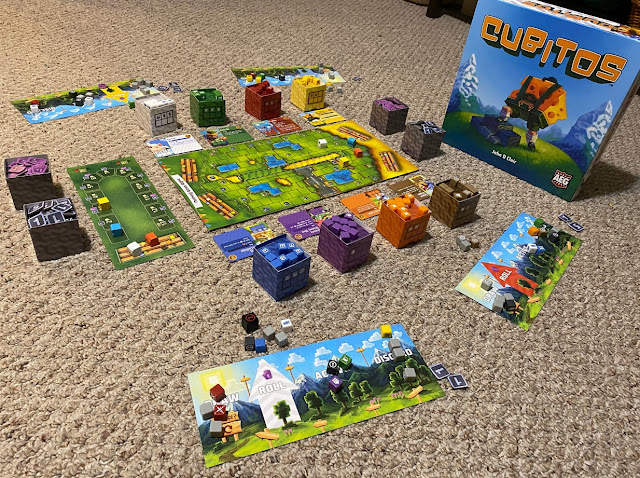 Did you know? Game tables are really expensive

The main board is a race track with a start and finish, as well as possible bonuses and shortcuts scattered throughout. Each player has a character on Start, a pool of nine simple grey dice, and a player mat that will guide the player in cycling their dice throughout the rounds.

At the start of the round, players choose nine dice from the Active Zone, which will be all the starting dice at first, but as players acquire more dice they will be able to choose which nine to roll. Simultaneously, all players roll their dice and move any that didn’t roll a blank face to the Active Zone. They can then continue to keep rolling the remaining dice as many times as they want, moving all dice that hit to the Active Zone. Once there are at least three dice in the active

zone, the push-your-luck comes into the game. If you decide to keep rolling, but make a roll and don’t get any hits, then you bust for that round and must move all Active dice to the Discard Zone.

Once all players have either busted or decided to stop rolling, then you go to the Move phase. You count up all the money earned by the dice and use it to buy new ones, count up all the feet and move your racer that many spaces around the track, and use any special abilities the dice grant for cool powers and combos. At the end of the round, all Active dice move to the Discard

zone, while the dice in the Roll zone that never hit have to stay there for the next round. This all happens simultaneously, but in rare cases where things conflict, there is a first person die that determines turn order and is passed around between rounds. I only wanted to mention this because this die is added to the player’s dice to roll, and is the only game I can think of where the first player marker is actually used in the game.

That’s a very basic overview of how the game works, but it really doesn’t explain why the game is great:

Firstly, the dice chucking. Rolling fistfuls of brightly colored cubes will never not be fun.

Secondly, the core strategy is very similar to that of a deck builder. You have a basic starting pool of dice that gives you basic purchasing ability to buy better ones. The dice you buy go into your discard until you are out of dice to draw, then the discard pile moves to the draw pile. You then draw up a ‘hand’ to roll. This is all very much a deck builder with dice instead of cards. The strategy comes into choosing which dice to buy to try to maximize combos. It is also beneficial to weed out the starting dice, as they take up space in your 9+ hand that you roll and don’t give you much.

Also just a minor note: the game components are all excellent. 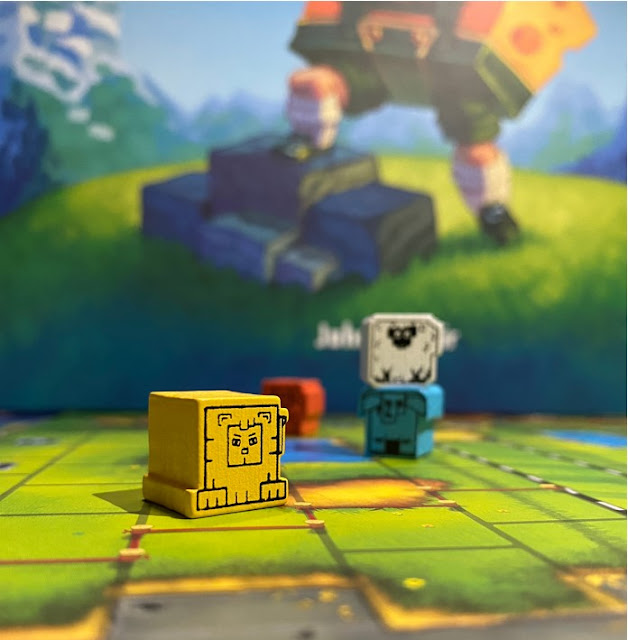 The last thing I’ll mention is the replay-ability of the game. There are two double sided boards for the racetracks, for a total of four different tracks to choose from. There are eight different colors of dice, and each color has a card that tells what the ability of those dice are. Each color of dice comes with SEVEN different cards with different abilities, meaning that the combinations of different dice abilities you can set the game up with is huge. Each color generally has similar abilities, like the green dice always help mitigate busting when pushing your luck and the red dice always involve comparing the number of red dice you have in the Active zone with that of the other players to get the benefit. This helps with the basic understanding of what the dice will do for you, and the variations make for a lot of fun combos and a ton of replay-ability. 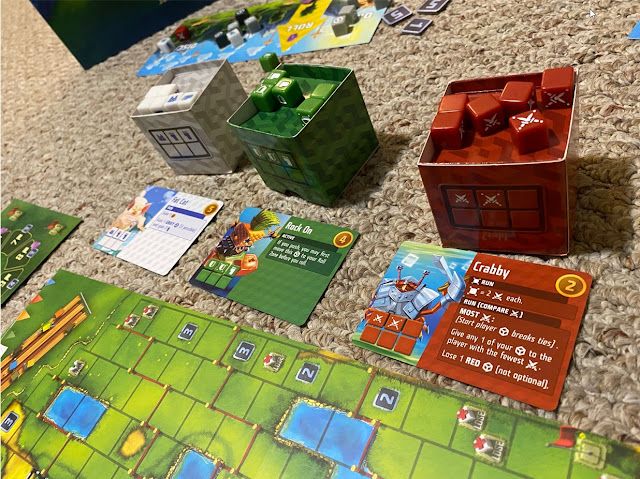 Important: The card names are all horrible puns

The primary negative is inevitable in a game based on rolling dice, and that is luck. Sometimes the dice just don’t roll in your favor and that can be frustrating, but there is some mitigation for that. Like I said earlier, the green dice give you ways to mitigate the effects of busting in various ways. Also, there is the fan track that you move up every time you bust. This gives you currency every time you move up, and also permanent increases to the amount of dice you roll each round which is very powerful. Some dice abilities also depend on a player’s position on this track, so sometimes busting is the strategic move. The main players roll extra dice based on how far behind the player in first place they are, which usually keeps the games close and prevents a runaway victor. Another minor negative is that there is no insert in the box so things will move around a lot when moving the game. Everything is stored in little boxes, which leaves a ton of little baggies once you get the boxes folded. 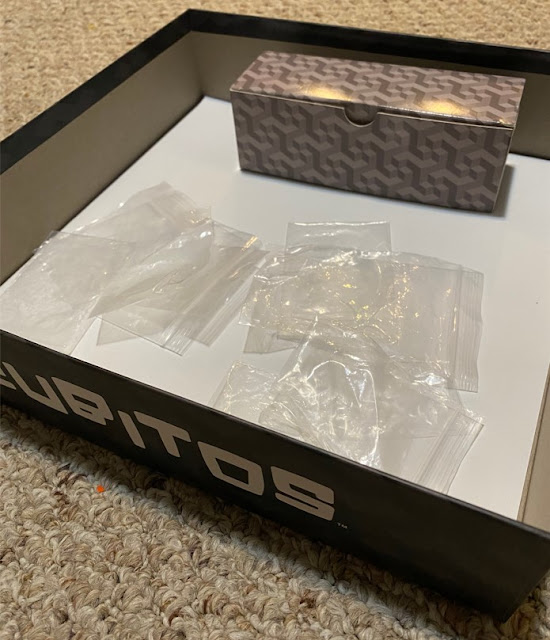 Also the boxes that everything is stored in improve the game’s table presence, but may require some tape to keep them together. Lastly, if you are playing this on a small table, a dice tray is absolutely necessary if you don’t want to be hunting down little dice when they inevitably go flying. 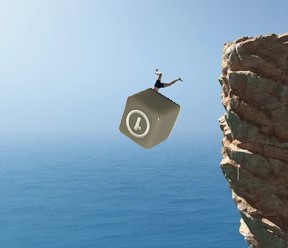 Oh, also the tie-breaker rule is probably one of the most ridiculous I’ve seen. If more than one player crosses the finish line in the same round, then the one who gets farthest is the winner. Makes sense. If two players are tied for farthest though, then everyone MAKES ANOTHER LAP OF THE TRACK. Making one lap can easily take 45 min+, and while the second lap wouldn’t take as long, it still could add an extra half hour to a game you thought would be over. Obviously no one is forced to do this, but it is still such an odd rule I wanted to mention it.

This game will be perfect for you if:

The clack-clacking of dice produces an indescribable sensation of joy within your soul. (You dice goblins know what I’m talking about).

This game may work for you if:

This game is probably not for you if:

You don’t like games with lots of luck, games with catchup mechanics that keep it close, or you simply don’t enjoy fun,

After reading Nick’s review, if this sounds like a game for you get it HERE.

Check out Cubitos and Alderac Entertainment Group on: 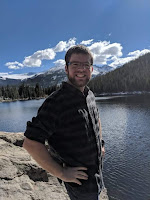