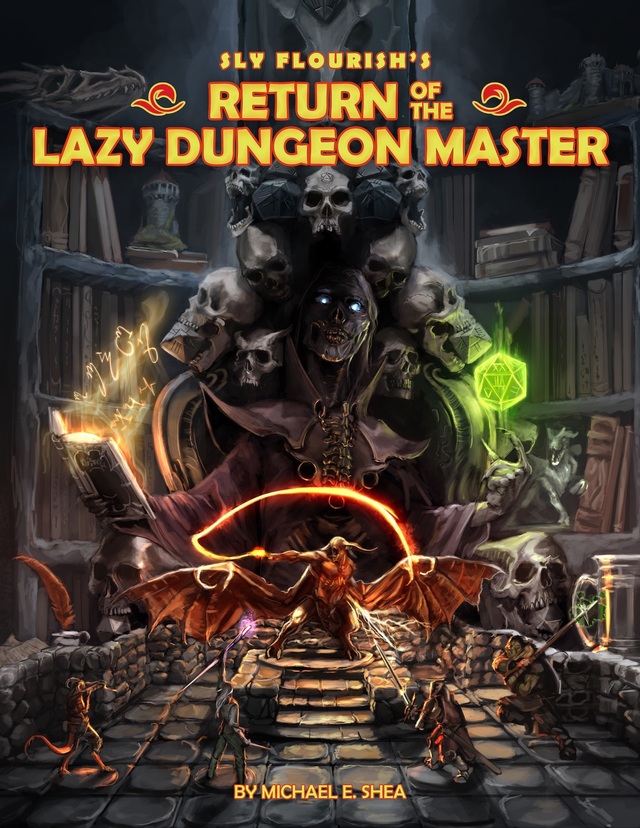 Disclaimer: The publisher provided the copy of Sly Flourish’s Return of the Lazy Dungeon Master. The opinions expressed in the review are completely my own.

My first Dungeons and Dragons game was in college, and I was the Dungeon Master. This was not by choice but the only way I could convince my friends to play with me was if I did all the prep work.

I must have prepared for two weeks for that game, as well as the next few. I didn’t have a consistent game for a long time, but I started a few adventures here or there, always with friends with even less experience than me, leaving me as the dungeon master.  And it was also only in the last couple of years, in fact, twenty years after my first D&D game, that I got to be a player for the first time.

All of that to say: I have been the forever DM since my very first game, and since I learned how to run a game by trial and error without actually watching someone do it first, I developed my own particular style of prepping a game, one that I thought worked pretty well. I always had fun and my players did as well. The only problem with it was that it was time consuming. Having a full-time job and a family, as much as I enjoyed being the dungeon master, I really wasn’t able to prep more than about a game a month.

And frankly I don’t think this is all that uncommon. Most DMs I speak to spend longer prepping a game than playing it, and that puts a real limit on the amount of time we are actually able to play, especially when we have so many other commitments.

And that’s pretty much the way I thought it needed to be for a while. That is until my own DM from the Dice & Dreary podcast gave me my first copy (a digital one) of The Return of the Lazy Dungeon Master. I’ve since obtained a physical copy as well, and I love having it beside me. I’m planning. It has, quite completely and fundamentally, changed the way I do game prep, and I believe it is a book any DM needs to read.

So it’s a time management book for role playing?

The Lazy Dungeon Master method is an approach to prep that seeks to focus on the things that actually make a difference and to do so in a systematic way. Now of course that is the difficulty, isn’t it? We all want to focus on things that are going to make a difference but we don’t know what those things are all the time. In a recent game, for instance, my players quite unintentionally skipped an entire skills challenge I had planned by avoiding some NPCs that would have set the quest up. This happens a lot in role playing, at least when you aren’t railroading your players (which gets tempting when they skip my skills challenges!).

But this system isn’t how to force your players into encounters or how to know whether they are going to engage the NPCs or avoid them. Instead it’s going to turn our attention away from some of the common rabbit holes that the players never notice toward things that they do.

The cleverness of the title aside, the goal here is to boil down prep work to a place where all of us busy people can reasonably accomplish it without quitting our jobs. So yeah, it’s time management for role playing, but it’s the great focus of the system that actually helps me get more done in a shorter amount of time.

So how does this work?

The main point here is to have a system that will focus our attention on the big ideas first – areas that the players typically find memorable, and not necessarily what we as DMs think are most important. And often times these are areas that we miss because we are focused on other things.

One of the big ones for me was having a strong start. I cannot tell you how many times I started a game with all sorts of cool scenes in mind, great settings and NPCs, but then realize I’m fuzzy on actually how to get the characters over to those great things. I’m convinced this is exactly why so many of our games start with “You’re in a tavern and someone walks up to you.”

From that start, our focus turns to the basic building blocks of the adventure – overall settings, particular scenes, important NPCs, likely encounters, treasures, clues, and the like. Each one will get a little of our time, but just enough to sketch out brief goals or descriptions. Frankly, none of these scenes go the way we plan anyway, right? Better to keep things loose – a few sentences at most. When it comes to NPCs, I always had a great idea for their character, but then three months later when we meet that NPC again I forgot what he was like. Shea advocates keeping these short too, using an archetype for yourself to remind you later of how this NPC acted.  Something like “Bureaucrat like Walter Peck from Ghostbusters.” That simple approach has an image in mind already, and we can work out a couple of details from there.

Some of the best ideas are lists of treasures and secrets. Again, these are weak areas for me so this has been a great exercise. These may be tied to a particular character or maybe they are just things and ideas that are out there. The players won’t find all of these in one session, but if the time is appropriate, we have something ready to reveal. We are keeping the rewards coming and also the plot moving. The characters aren’t fighting for the sake of combat, but they are learning things as they go. Perhaps some of the secrets wait for another time, but if they manage to capture the evil sorcerer rather than kill him and they begin their questioning, you have some answers at your fingertips instead of fumbling around because you thought for sure they would kill that guy right away.

In my DragonLance game, the players were in the court of the Speaker of the Sun, and reports were coming in on the draconian advances. I thought my players would chime in with these discussions, but instead our Druid cast Talk with Plants on a nearby fern and begins chatting. This is the very reason why you write down secrets. Perhaps even a secret about the Speaker that the players probably won’t even learn, but if they start talking with plants they might find out.

At the end of this, you will have one or two pages of notes of the really critical things about the next session. From there extra time can be spent if desired, but the goal here is to have a memorable adventure ready in a short amount of time.  You can very realistically prepare for the session in under an hour and be ready for several hours of play.

Probably. Or at very least it’s worth considering the points being made, even if you change them and make them your own (a practice Shea encourages). Even if your approach is working, it might be worthwhile taking a look at another proven approach in order to fine tune what you are doing.

In my own case, I spent a ton of time on plot, would kinda play out the scenes in my head a bit, work on some encounters. Now all of that is fine, but the Lazy Dungeon Master method reminds me that I’m simply not ready if the party finds a treasure or chats very long with the shopkeeper.

The systematic way of approaching the session is a good exercise, and one that promises to enhance the experience. It has quite literally changed the way I approach the game, so it is definitely something I recommend for all dungeons masters. 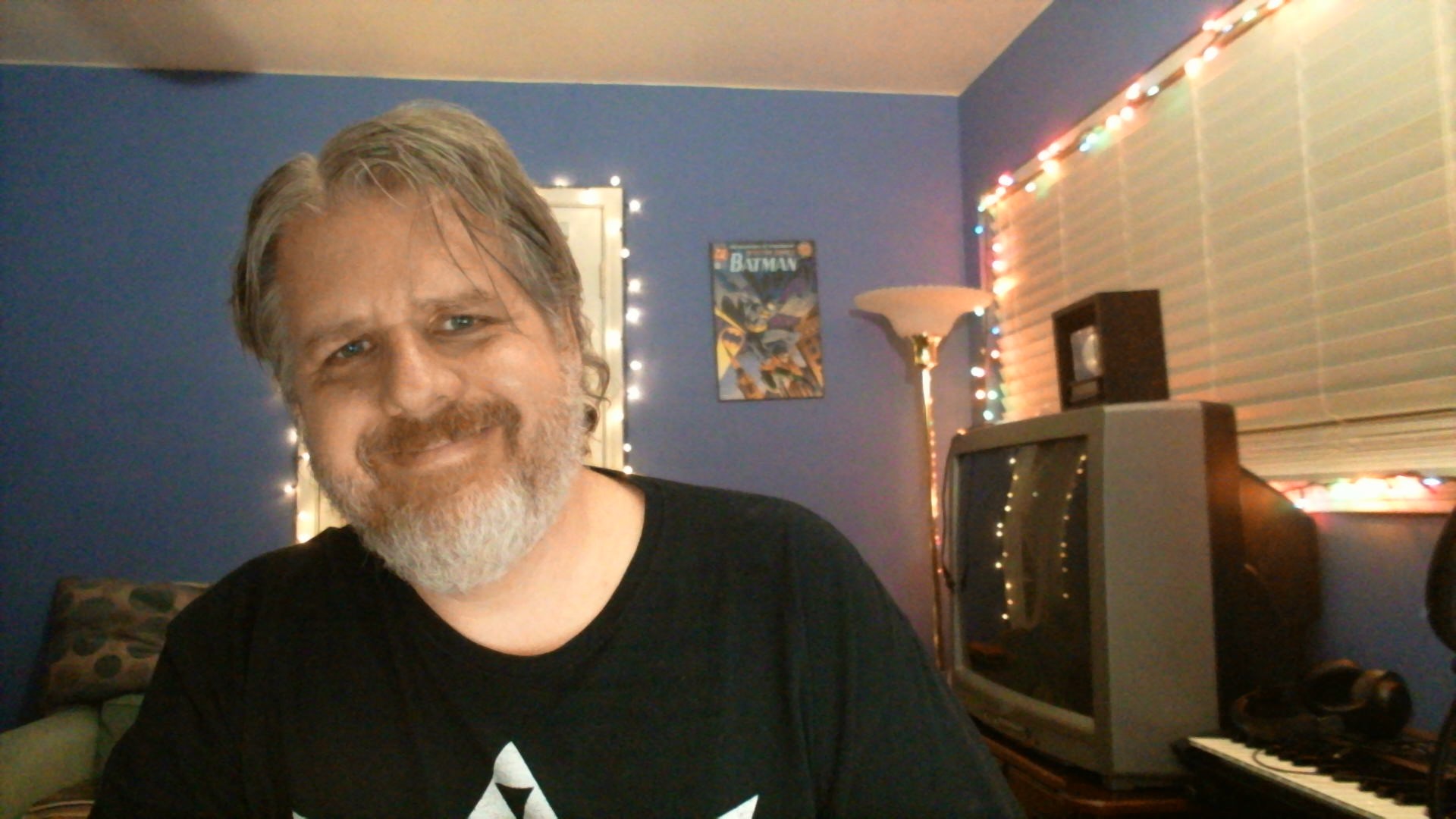