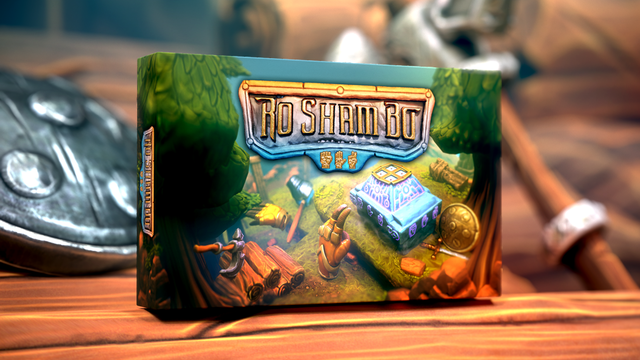 No. of Players: 2
Ages: 10+
Playing Time: 30-45 minutes
Find more info on BoardGameGeek.com
From the Publisher:

Venture into the world of Ro Sham Bo.

The two player strategic board game where you collect wondrous artifacts to outwit your opponent and defeat them in battle.

There are two types of Artifacts to choose from, tactfully traverse the board to collect these artifacts and use their power to give you positioning and combat advantages.

Combat is engaged in close quarters through an attack and then counter phase.

Use the Artifacts you collected to tactically turn tables. The true spirit is being able to chain these artifacts with one another.

Do you have what it takes to go hand to hand?

Disclaimer: The publisher provided the prototype copy of Ro Sham Bo. The opinions expressed in the review are completely my own. 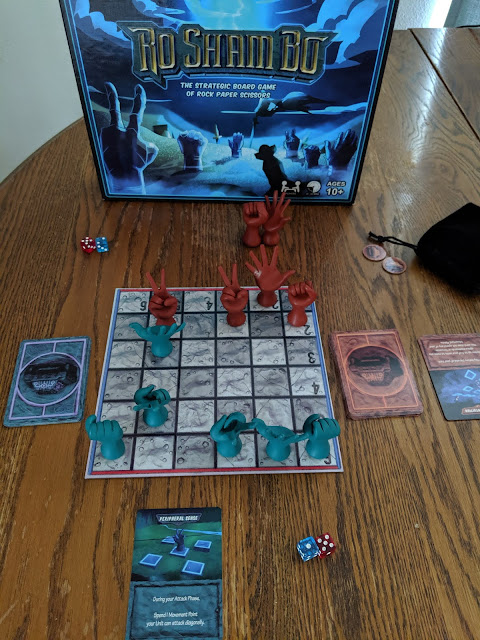 Welcome to Ro Sham Bo, and no, it’s not the urban dictionary version of kicking your opponent in the nuts until you’re the last one standing! Unless it pains you to lose then it might feel that way. This is the classic game of Rock Paper Scissors made into a board game. It reminded me a little of Chess just on a much smaller scale with some added board game elements of tokens, cards and dice.

What I like about the game, is that none of the cards are repeated, which makes it so that each players strategy is different and constantly changing. When a player lands on an artifact token they choose two cards and can either keep one, giving the other to their opponent or discard both cards. This can either be helpful to the opponent in changing up their strategy or it can be a disadvantage if they have too many cards in hand and are required then to discard a card. The cards are well designed, intriguing, and self explanatory, each with a unique attack or defense play. I also like the simplicity of the rounds, there’s the artifact phase, the 1st players turn, then the 2nd players turn and you repeat this until one player has conquered and defeated all their opponents game units.

I do think some aspects could be improved upon though, I didn’t like the fact that the artifact phase always occurs before the 1st players turn. Player one rolls the dice, the tokens spawn on those coordinates and then player 1 takes their turn. Player 1 now has the advantage to land on the token first, choosing their card to keep or choosing to discard both cards. There of course is a chance that the coordinates make it so the artifact token lands on a game units spot which then immediately goes to them. However, I still think it’d be more fair if the artifact phase was alternated between the players turns, or even making it at the beginning of each players turn. The game units are designed in the rock, paper, and scissor hand shapes, there are two of each symbol for each team, so 6 game units total for each player, they are not exactly durable though. My toddler got a hold of one of the paper shaped game units and dropped it on our hardwood floor causing the pinky to be severed from the hand! Maybe this is meant to be a more brutal combat than I expected… is this suppose to play like Wizards Chess?…

It’s a cool concept bringing the Rock Paper Scissors battle to life, it wasn’t exactly my style of game, but I also was never partial to chess. If you enjoy 2 player, tactical strategy type games though, then you’ll enjoy Ro Sham Bo.

Sound like your kind of game? Back it on Kickstarter!

Check out Ro Sham Bo and Pearly Pigeon on: