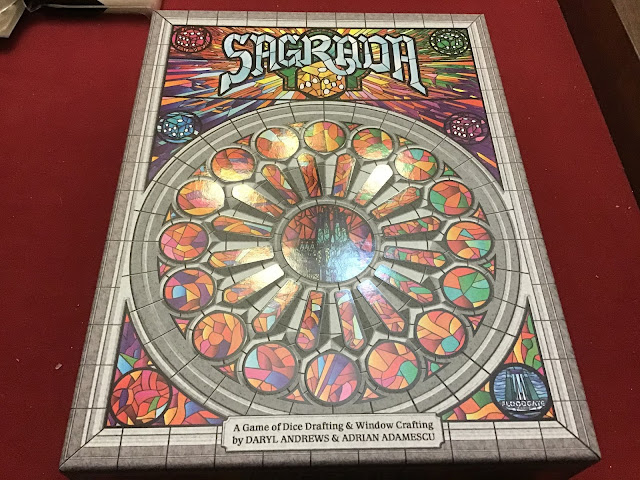 No. of Players: 1-4
Ages: 14+
Playing Time: 30-45 minutes
Find more info on BoardGameGeek.com
From the Publisher:
Sagrada in which you draft dice and use the tools-of-the-trade to carefully construct your stained glass window masterpiece.

In more detail, each player builds a stained glass window by building up a grid of dice on their player board. Each board has some restrictions on which color or shade (value) of die can be placed there. Dice of the same shade or color may never be placed next to each other. Dice are drafted in player order, with the start player rotating each round, snaking back around after the last player drafts two dice. Scoring is variable per game based on achieving various patterns and varieties of placement…as well as bonus points for dark shades of a particular hidden goal color.

Special tools can be used to help you break the rules by spending skill tokens; once a tool is used, it then requires more skill tokens for the other players to use them.

If you have ever looked into a tornado lamp or lava lamp that shifts from color to color as it
swirls before you, I would wager that you can imagine what it was like for me when I inundated with photos of a quaint-though-pretty looking game called Sagrada in various board game groups a few years ago. Clearly, people were liking this game (or at least, its appearance) enough to swarm the message boards with countless pictures depicting this kaleidoscope of colors.

It was in viewing these pictures that I must have been similarly hypnotized, because though it

took months, I eventually ended up buying the game in what I theorize must have been some

sort of color-induced form of subliminal marketing—And it worked!

with a stained glass theme. Players will randomly draw dice from a bag on their turn in attempt to place them onto their personal window-shaped board, in effect strategically placing them to maximize points for taking home the big win. 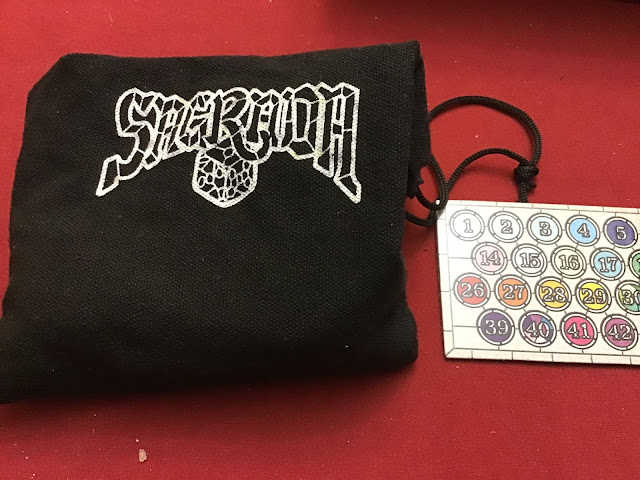 adjacent to a die already in play. Once all the players have completed their “masterpiece”

window by using all of the dice available, or run out of valid locations to put a die, the game is

over and final scores are tallied.

The rules may sound easy, and we find that this is true in both theory and in practice, which is

great for just throwing together an activity with friends in a spur-of-the-moment decision.

There are, of course, a few nifty mechanics that can throw a monkey wrench into your efforts to

achieve victory, namely the bonus point system, that can either help or hinder your victory. This

conditions for scoring bonus points, which are your bread and butter for achieving victory.

For example, one of such cards sets forth the stipulation that when placing dice on the 5×4

grid, you cannot repeat numbers on a given row or column. If you fulfill this condition, you may

end up with 5 points for each row or column that met this criteria at the end of the game.

Another card may award points based upon how heavily you rely on a specific color. These

juicy supplements seem that they can provide you with a clear path to victory, but they can

Because if you fail to fill all spaces on your board, you end up losing points when the dice

hit the fan at the end of the game.

There are thankfully other means of mitigating the potential for point loss, and achieving a 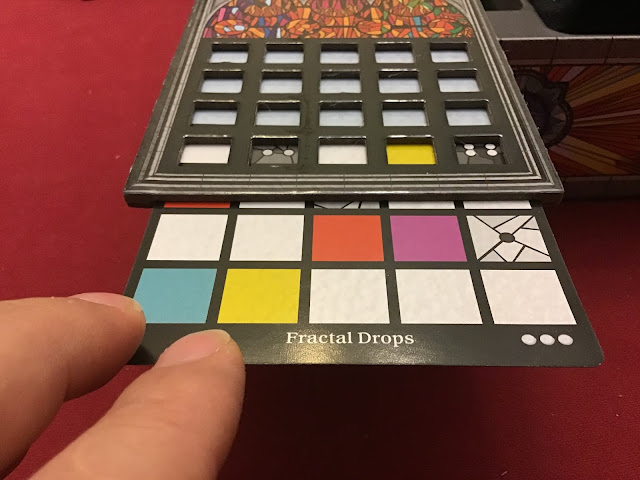 For example, each board has a slide-in tray that fits a special card that serves as a difficulty

modifier. By placing this card at the beginning of the game, it creates a special field on each

player’s board that prohibits certain dice from being played on a slot. Each of such cards has

a difficulty level you can choose. If you feel lucky , you can take your chances with a card

that offers a greater potential point award for completing the game with it, but impairs your

chances of success. If you want a less restrictive setup, you can opt for this as well,

but this path offers less points for completion given its relatively low handicap level.

rules in your favor. This can include letting you ignore the normal rules for not placing identical

numbered or colored dice adjacent to each other, stealing a die you need from another

location, and more. Use these abilities when you are in a pinch!

So what do we think?

Sagrada has a very peculiar sort of niche for us. And I do not want the creators of the game to

feel insulted when I make this analogy, but this is the best we can come up with.

The game does not satisfy our need for deep, long rewarding gameplay. Let us get that

clarified right off of the bat.

Rather, this game feels most akin to comparing fine dining or painstakingly made home-cooked

meals to fast food. And I do not mean this in an insulting way, but rather, that different situations

call for different solutions. 95% of the time, I enjoy cooking at home or coming up with the

best meal that I can, regardless of price. The other times, I must concede, whether because

time constraints, price, or just feeling lazy, I may rely upon the old standbys of Burger King,

McDonald’s, Subway, etc, just because they get the job done and allow me to continue on

through the rest of my day until the next meal opportunity comes along.

That is how I would best describe Sagrada for our group. Most of the time, we will want

experience. For other situations where I do not have any deep gamers with me, or an over-

abundance of time, I have the likes of Sagrada.

It is the type of game that I find goes perfectly with coffee, or as a teatime activity. It goes well

It does have a place in our home, but because of its easy-to-grasp nature, it does not quite

have the longevity to give us an afternoon of it most of the time.

lack of fun, but rather, a lack of depth for my particular group, and this attribution will vary

from person to person, so bear this in mind

when reviewing our final assessment of the game.

And because we generally find that it is meant for shorter times, this impacts our sense of

replay-ability and makes the game feel like a sort of one-off for most occasions, as the

that no game will feel different than a previous one, even given the random nature of dice

drawing. A few more options and cards could potentially offset this sentiment , and perhaps

the expansions for Sagrada address this…

That does not mean that you should not give it a try, not in the least. It has a beautiful

presentation and table presence, and that I can think of, has only one other major drawback… 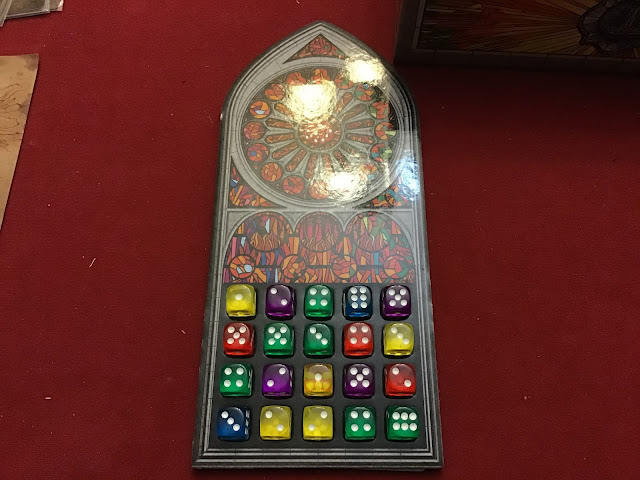 The components, especially the dice, are all spectacular, but my only quarrel with them is

the size of the dice ; I wish these could be standard sized, as opposed to mini dice, as

they have a tendency to get bumped and misplaced a lot if you have big, clumsy fingers.

The game itself is very affordable , so at this price, I find you do not have a lot to lose for

Check out Sagrada  and Floodgate Games on: 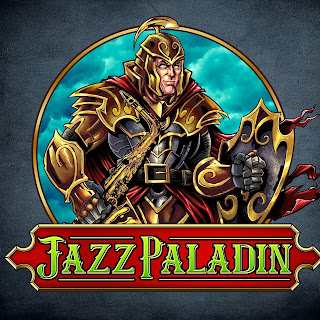