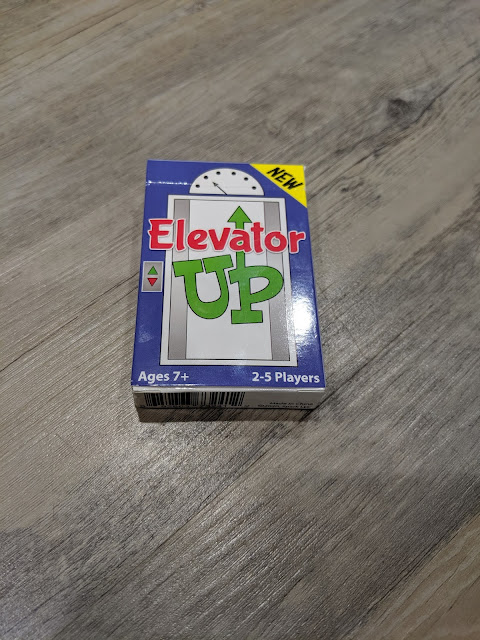 No. of Players: 2-5
Ages: 7+
Playing Time: 10 minutes.
Find more info on their website.
From the Publisher:
Review:
This card game is very simple to learn, in fact I’ve been teaching it to friends and family for years… Of course I didn’t call it Elevator Up, and we used a regular deck of cards. I know this game by the name of “3 card”, or also commonly known as “shithead.” There are a couple small differences to this game though, which required I still read through the rules. The rules are very easily understandable with a diagram of setup to help visual learners.
Game rules: 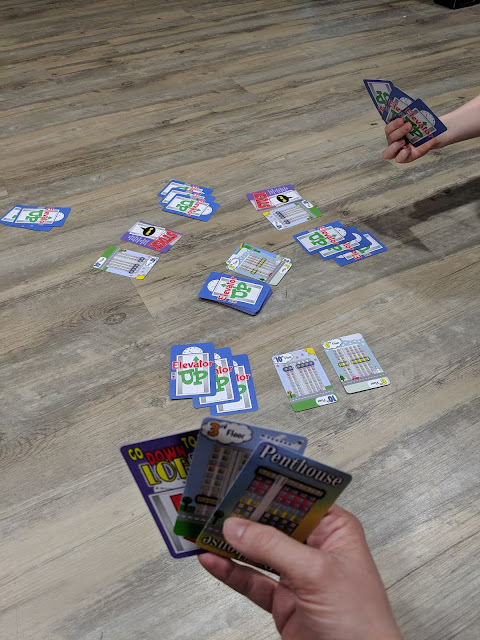 3 facedown cards are dealt in front of each player, then two face up cards in front of everyone. Then deal 3 cards to each player for their hand. Decide who goes first.
The first player discards a numbered floor card (more than 1 card can be discarded each turn as long as it’s the same number) and then the player must draw back up to 3 cards in their hand. The next player must lay a higher floor card and so forth, until someone is unable to lay a higher card.
If a player can’t beat the last number card with a floor card of their own they have the option to use a special card if it’s in their hand.
Special Cards:
The “Lobby” card restarts the deck so any number can be played by the next player. The “New Building” card can remove the entire discard pile from the game and the player gets to go again, so it’s a nice one to hold onto. Three new ideas of play have been included in Elevator Up which are not in the regular card game that I’m used to. These special cards are “Stuck” which can be played on top of any card and the next player must beat the last floor number that was played, ” Door Closed” which skips the next players turn (this cannot be played upon any other special cards), and lastly, the “Penthouse” card which is the highest floor and ONLY other special cards can be played on top of this. There is only 1 penthouse in the entire game so if the player doesn’t want to pick up the discard pile then hopefully they have a special card in their hand to play.
If a player cannot beat the previous cards floor number or play a special card then they must pick up the whole discard pile. They no longer draw from the middle deck until they have less than 3 cards again. If there are 4 of the same card laid consecutively that will also remove the entire discard pile from the rest of the game, and the last player to lay the 4th card gets to play again.
Once the middle deck is gone, it’s a race to be the first one to get rid of their hand. Whoever gets rid of all their cards first wins! Players must first play all the cards in their hand, then they must use the 2 faceup cards in front of them, then randomly choose and blindly play the facedown cards hoping that it’ll best the last card played. If it doesn’t beat the last card then the player is required to pick up the entire discard pile and put it in their hand, the hand must be successfully discarded before any other facedown cards can be played. This continues until the player has no more cards in their hand or in front of them. They have won “Elevator Up.” 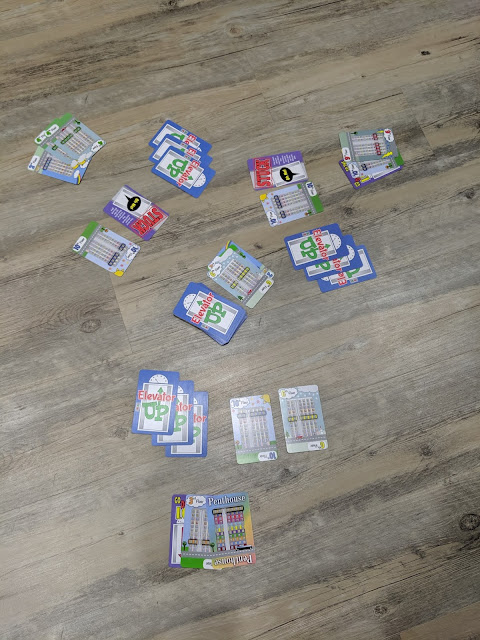 Final Thoughts:
This is a fun, fairly quick game. The floor cards have cute little apartment buildings on them with the floor numbers in the top and bottom corners, and visually that floor number is also highlighted in the apartment drawing. The special cards have big, bold captions and it states what each card does. This game can be played with younger players as long as they can read, or they can memorize the look and function of each special card. Some games have a fun way of deciding who starts the game, I feel like this was a missed opportunity with Elevator Up, the obvious being who rode an elevator last. It’s an enjoyable game, I just couldn’t get over how very similar this game is to the regular card game I’ve been playing for years! The nice thing with a regular deck of playing cards is that by adding in an extra deck it allows up to 10 people to play. It’s an easy game to teach young children and grandparents alike, and perfect for family gatherings (after Thanksgiving dinner but trying to gain some room before dessert). Elevator Up is a nice small deck to travel with, and still fun to play with up to 5 people. The more players, the better.

Disclaimer: The publisher provided a copy of Elevator Up. The opinions expressed in the review are completely my own.
Check out Elevator Up and Spark LLC on: